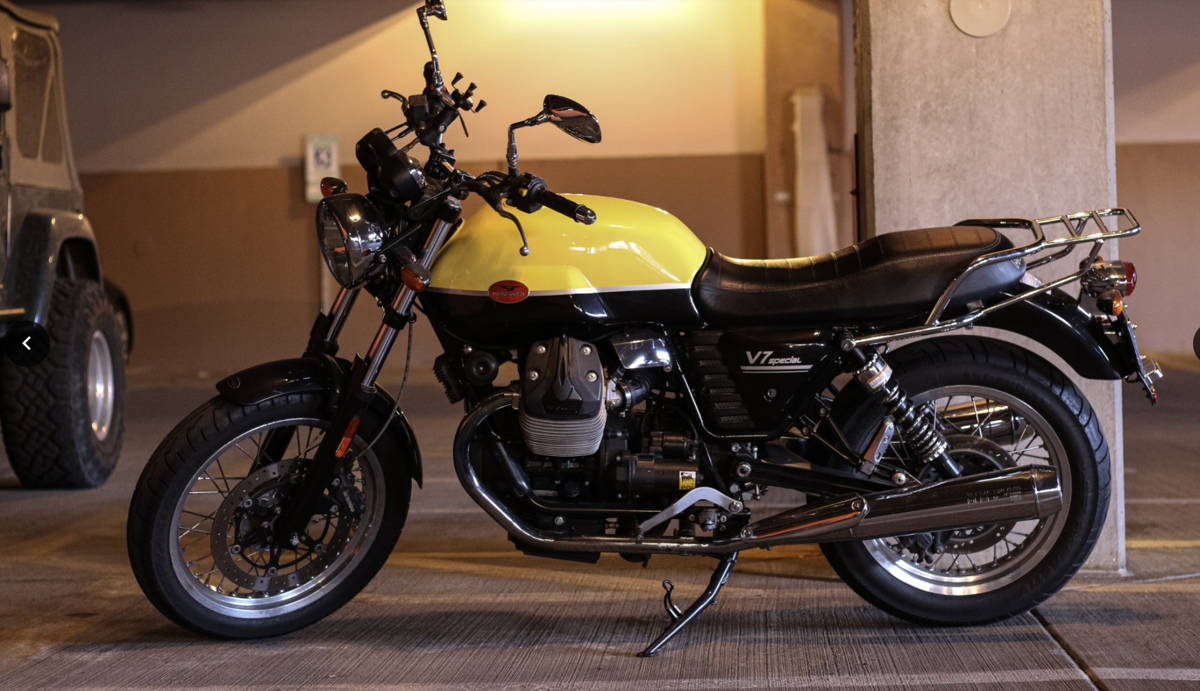 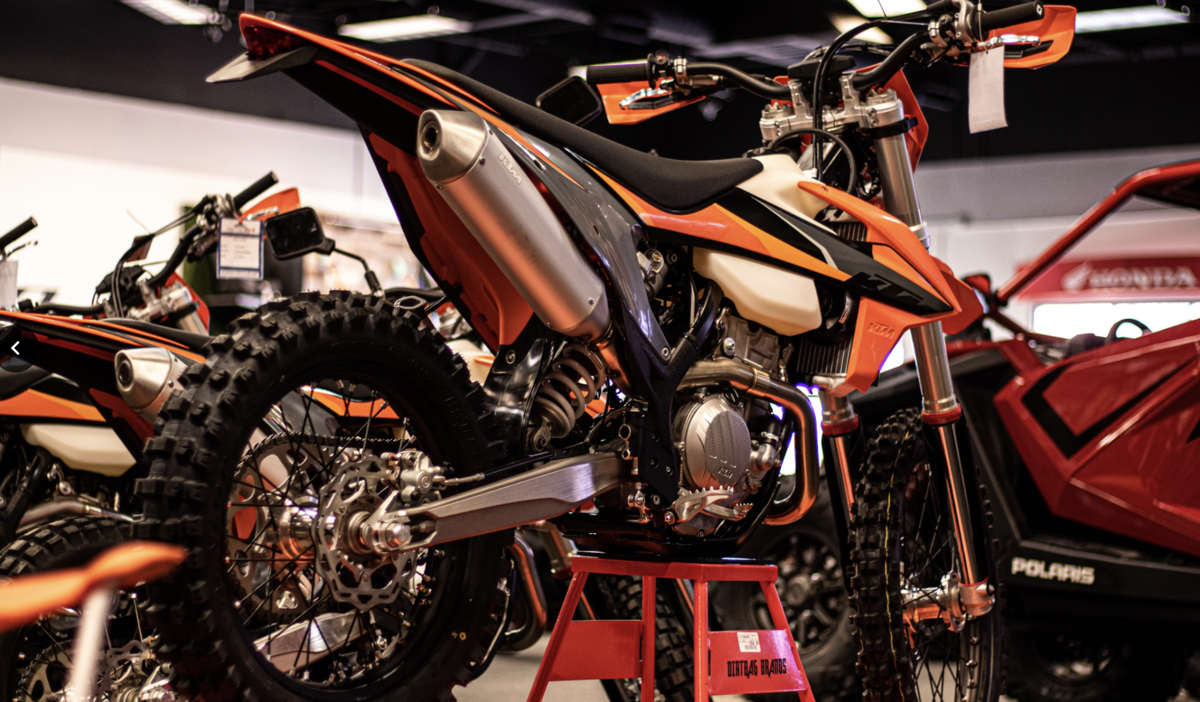 A KTM motorcycle sits on display at the Flagstaff GO AZ Motorcycles, Feb. 26. 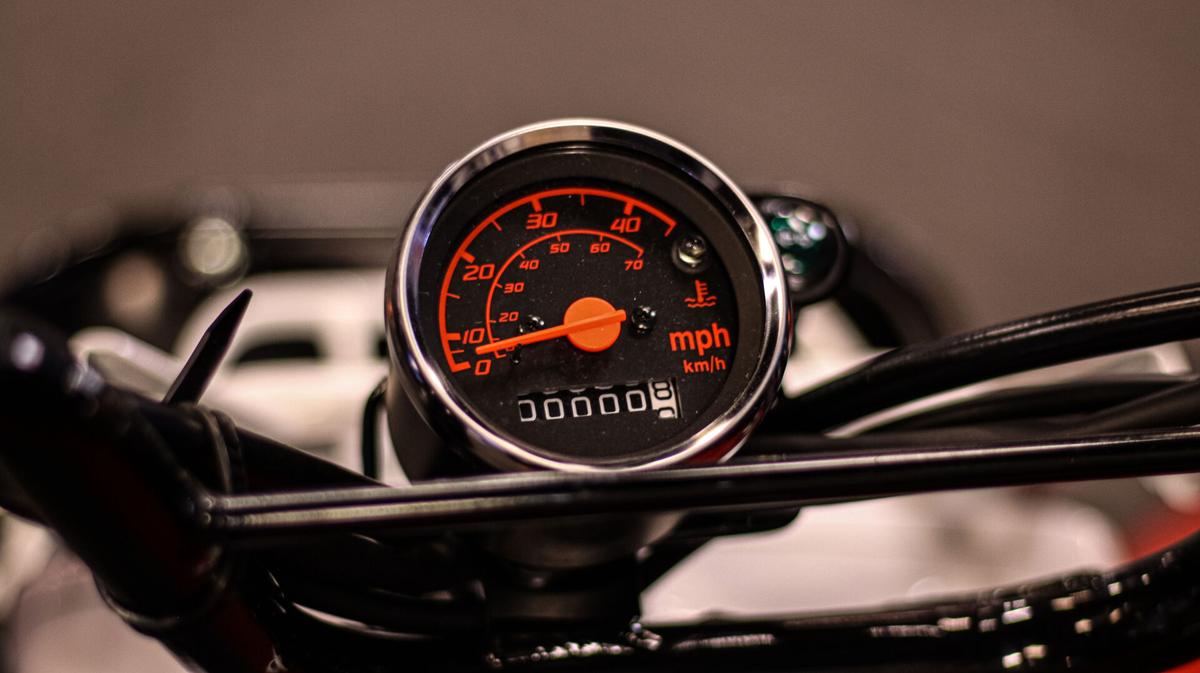 A speedometer is shown on a Honda Ruckus sold at GO AZ Motorcycles, Feb. 26. 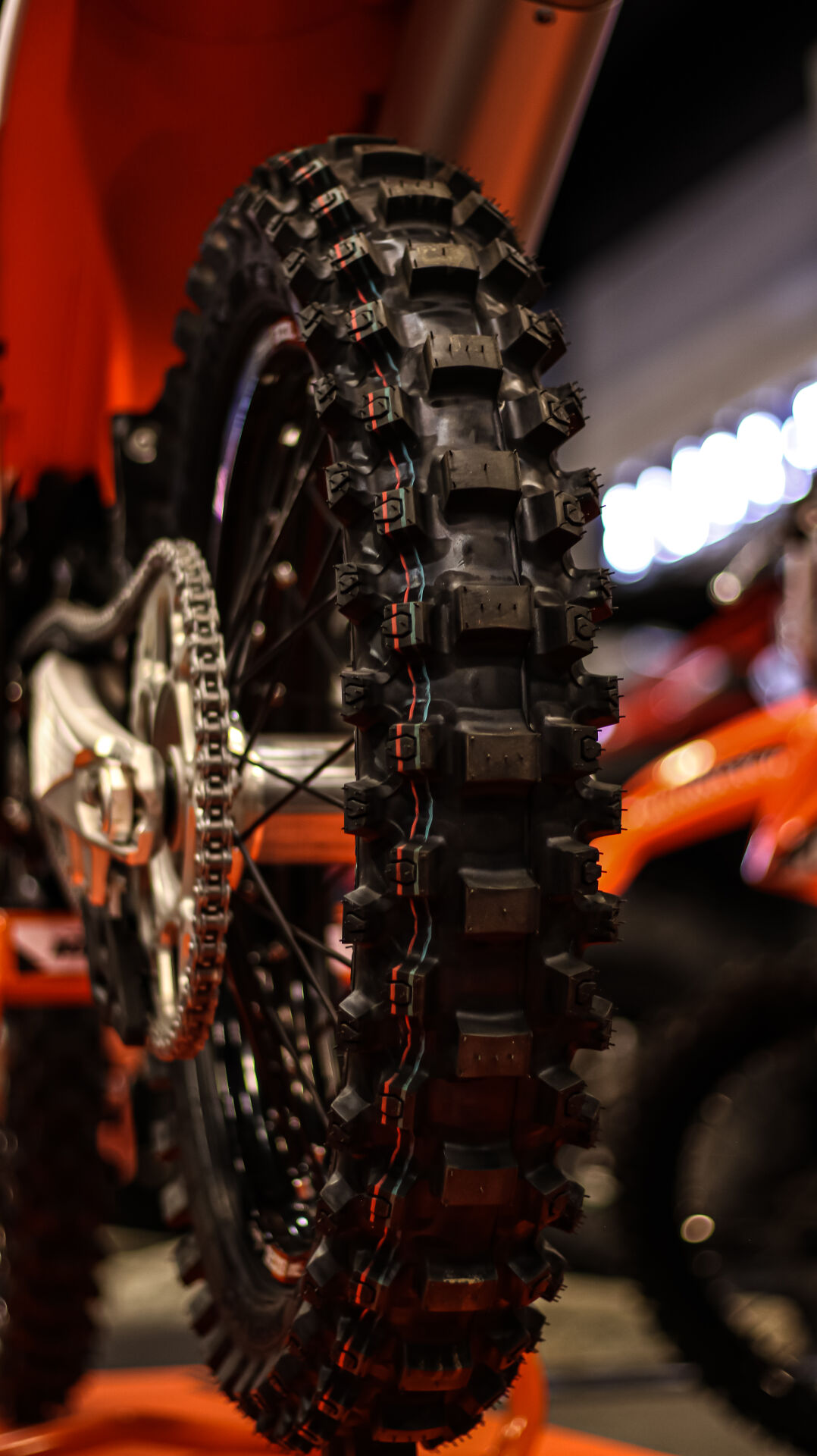 Off-road tires are equipped on all off-road vehicles at GO AZ Motorcycle, Feb. 26. 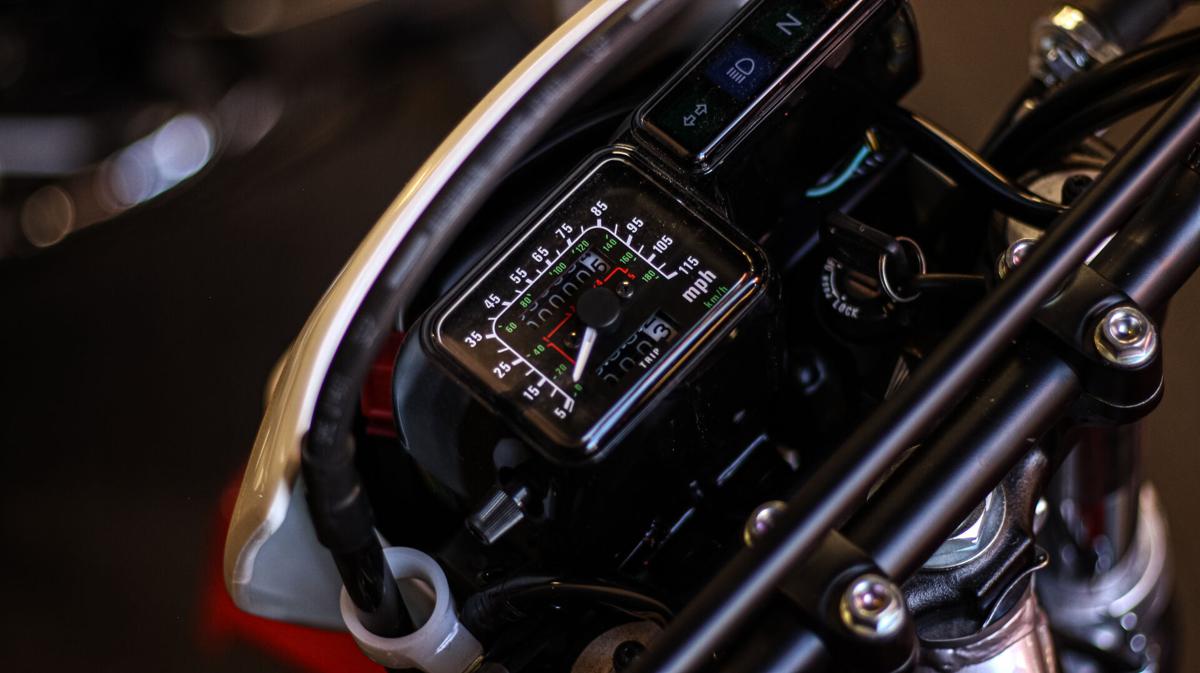 A speedometer is shown on a classic '80s Honda Dirtbike in GO AZ Motorcycles, Feb. 26. 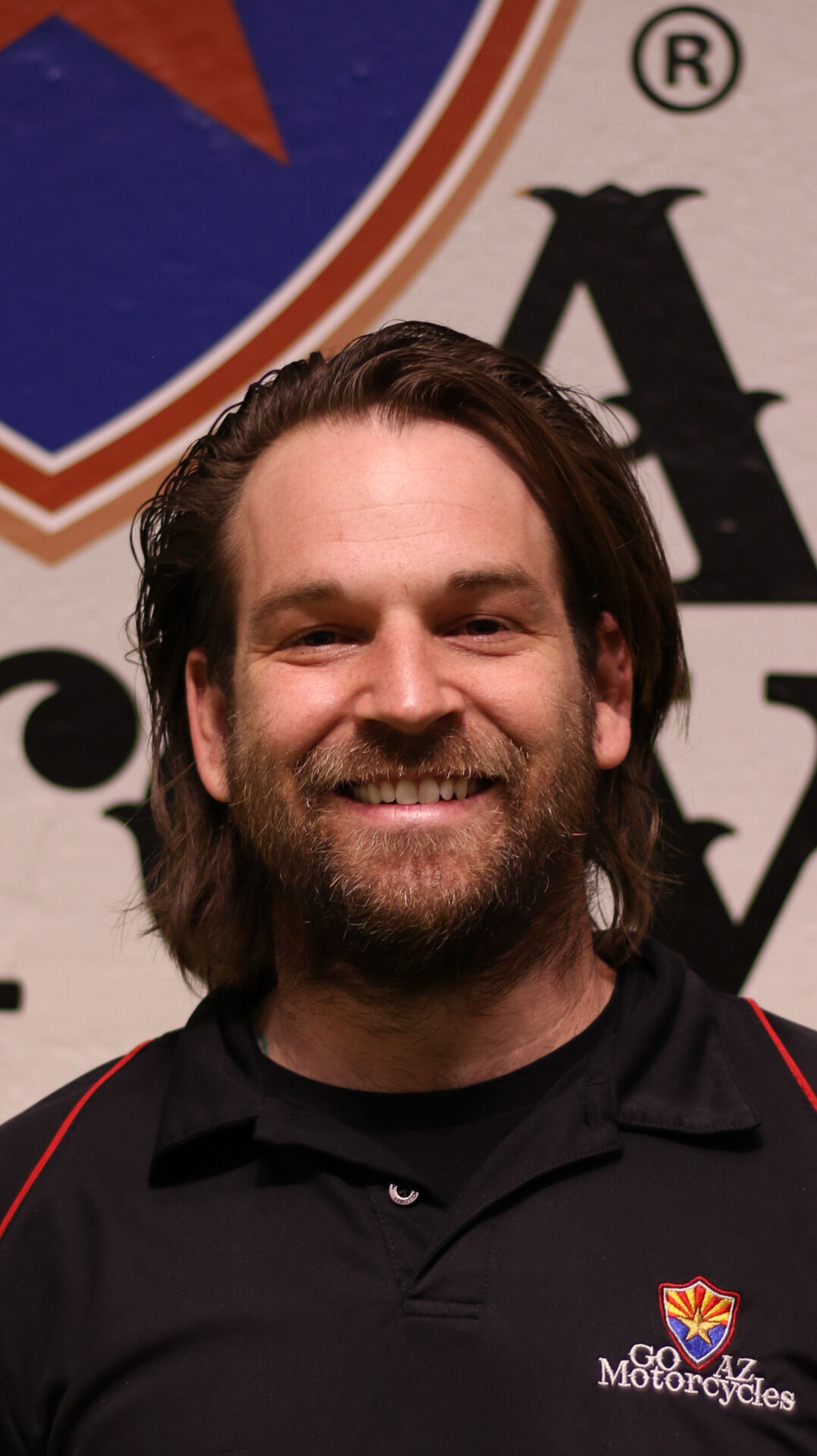 A KTM motorcycle sits on display at the Flagstaff GO AZ Motorcycles, Feb. 26.

A speedometer is shown on a Honda Ruckus sold at GO AZ Motorcycles, Feb. 26.

Off-road tires are equipped on all off-road vehicles at GO AZ Motorcycle, Feb. 26.

A speedometer is shown on a classic '80s Honda Dirtbike in GO AZ Motorcycles, Feb. 26.

Throughout much of the United States, dual-sport riding, or the blend of on-road and off-road riding, has captivated an ever-growing number of enthusiasts. Enduro motorcycle riding is defined by Dirt Bike Planet as riding or racing over challenging long-distance terrain. Although professional racers may push themselves to the limits of their machines, many enthusiasts of the sport take joy in casually riding long stretches of easier terrain.

According to Rider Magazine, motorcycle ownership in the U.S. rose from 6.94% in 2014 to an all-time high of 8.02% in 2018, adding over 1.5 million households that identified as owning a motorcycle, bringing the number to just above 10.1 million households.

Enthusiasts of the sport flock from all over the western U.S. in order to enjoy the distinctive biome of northern Arizona where the vibrant red rimrock of Sedona latches onto the never-ending rows of Ponderosa pine trees.

Brett Spann is the service manager at GO AZ Motorcycles in Flagstaff. The motorcycle chain has locations throughout the state in Scottsdale, Cottonwood and Peoria. Per the GO AZ Motorcycles website, the Flagstaff location represents brands like Honda, Kawasaki, Yamaha, Can-Am and more. Along with the sale of motorcycles, the store also specializes in the sale of all-terrain vehicles and side-by-side utility terrain vehicles (UTVs). Spann emphasized the enthusiasm of customers throughout the pandemic to buy their new machines and hit the trails.

“We have been making large amounts of side-by-side [UTV]  sales and motorcycles are always huge as well,” Spann said. “We have big attractions in east Flagstaff and all of the terrain loops that create a lot of opportunities for people to get out and ride. The market is growing very fast and frankly, the pandemic has helped our sales numbers. We have sold so many bikes and side-by-side [UTVs] in this COVID-19 market mostly because people are trying to find ways to get out and socially distance, and by definition trail riding is something that is socially distant.”

Spann is originally from the Phoenix area. He explained how much the political tides have influenced the constantly shrinking land access opportunities in Maricopa County, but felt like Flagstaff riders have a fighting chance.

“Land access has remained largely the same,” Spann said. “I am originally from Phoenix and during my time living there around 15 to 20 years ago, there was so much access for people to get out and ride wherever they wanted to. Phoenix is getting bad and now with construction, more and more places are getting closed off and requiring different tags and permits, which used to never be a thing. Coconino County has not changed very much in regard to land access, mostly because of national forests locking up a lot of the space around Flagstaff and the rules and regulations for those areas have largely remained the same.”

Riders in the area find enduro riding to be a form of relaxation and a healthy way to get rid of stress, even when the sport itself requires a high level of physical exertion. Health Fitness Revolution is a nonprofit movement that aims to spread the message of health and fitness globally. It listed numerous health benefits of dirt bike riding on its website, such as effective calorie burning, brain stimulation and increasing strength, stamina and balance.

Bryan Adden is a Flagstaff resident who has lived in the area for the past two decades and enjoys enduro riding in his free time. Adden said his day job of being a locomotive engineer for BNSF Railway — the major freight carriers who locally run trains through Flagstaff — can put stress on him. During the warmer months of the year and when his schedule allows for it, Adden said he finds himself riding with friends in and around the Flagstaff area.

“We have a ride we love to do which goes around the [San Francisco] peaks and offers such amazing vistas,” Adden said. “Another very common one we will take usually during late summer or early fall is the Edge of the World overlooking Sedona. There are a ton of loops and trails that wind in and around the rim overlooking Sedona, where the viewpoints are second to none.”

A major limiting factor for many fans of the sport is the price of buying and maintaining a motorcycle — not including gear, fuel, travel expenses and unforeseen incidents. Adden said a big reason he did not get into the two-wheeled sport earlier was because of the price tag and other priorities in life. Adden rides a mid-2000s Honda, which he said is a great option for people looking to get into the sport.

“I did not have that kind of money in my youth, and having kids with a mortgage certainly did not make money problems go away,” Adden said. “Now that everything has settled down a bit, I have the time and resources to do it.”

Reid Mirvis has ridden for most of his life but now travels heavily throughout Southern California, Arizona, New Mexico and Colorado on enduro riding trips with groups of riders and on his own. He said he owns multiple bikes that are fitted for different terrain and weather scenarios to produce the smoothest rides he can generate. Mirvis said Flagstaff has offered him some of the best trails and views out of anywhere in the Southwest.

“I spend a lot of time riding in the lower Rocky Mountains of Colorado and into New Mexico, but I make a point to spend some time and ride throughout Coconino [National Forest],” Mirvis said. “Driving into these mountains from [Colorado] is such a beautiful sight and being able to get on my bike and ride them makes it so much better. I have been riding the area for many years now and it amazes me how it never gets old. Flagstaff is so unique in terms of the lava rock, red dirt and tall pines. Definitely a place I will keep coming back to.”

As an unknown sport to many residents of Flagstaff and students at NAU, enthusiasts like Adden and Mirvis highlight a small portion of what enduro riding is like in Coconino National Forest. With growing numbers of riders in the area, more people might find themselves exploring the motorized cycling sport.