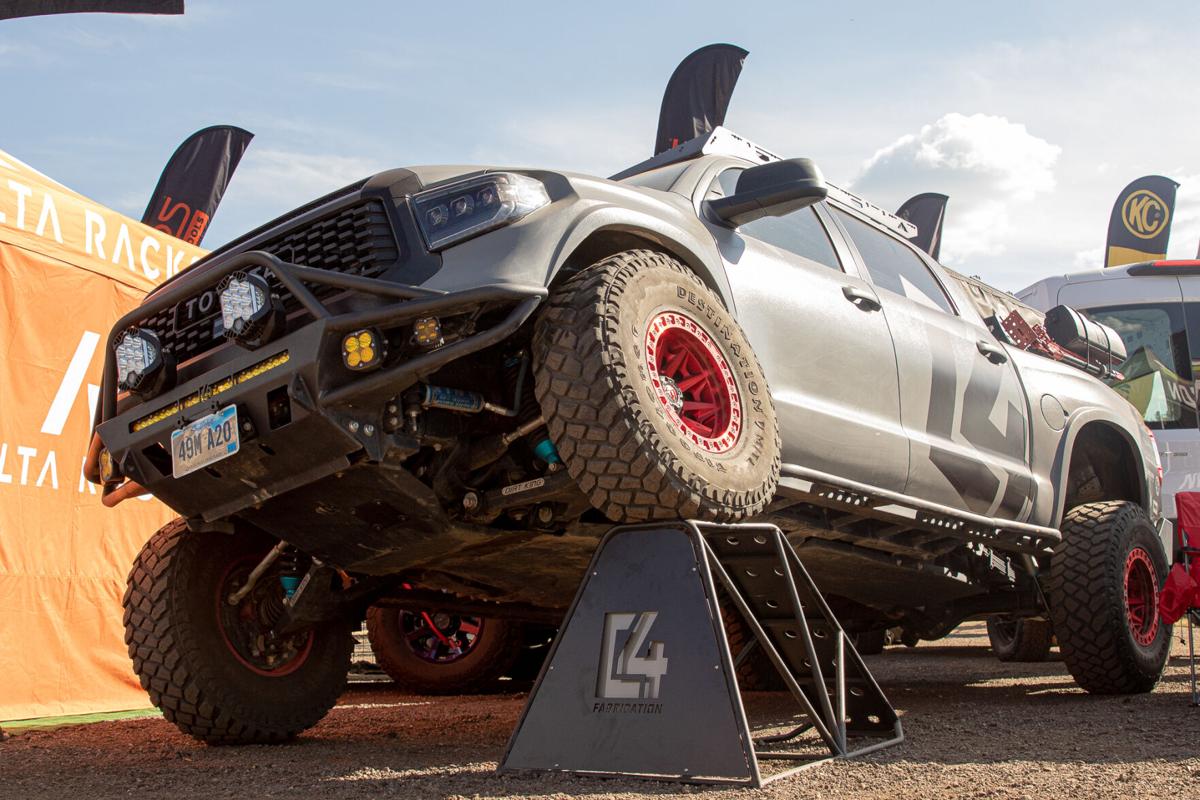 A Toyota Tundra showing off its suspension set-up, Sept. 24. 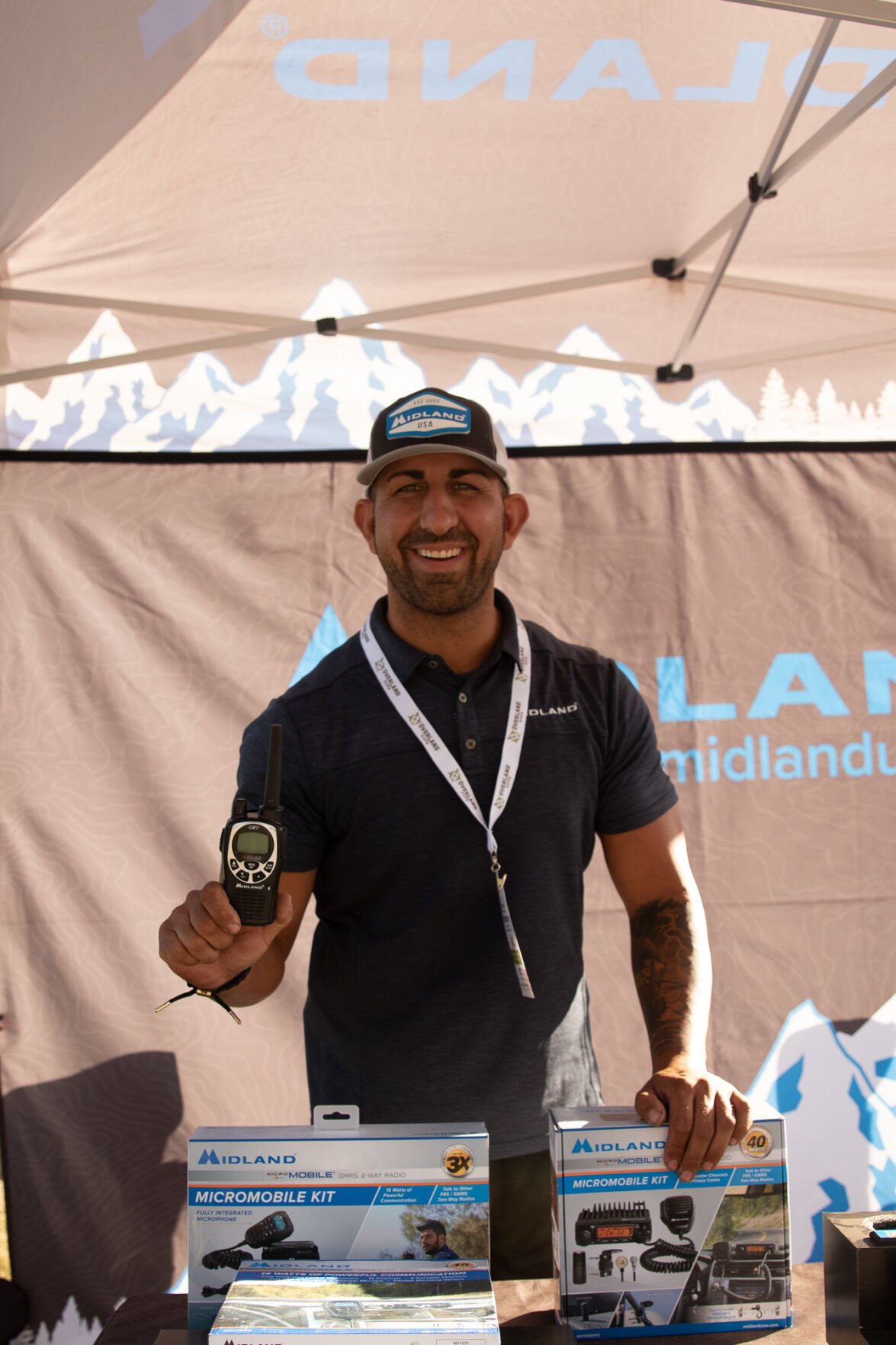 Representative at Midland Radios, Nick Bravo, showing off one of the company's products, Sept. 24. 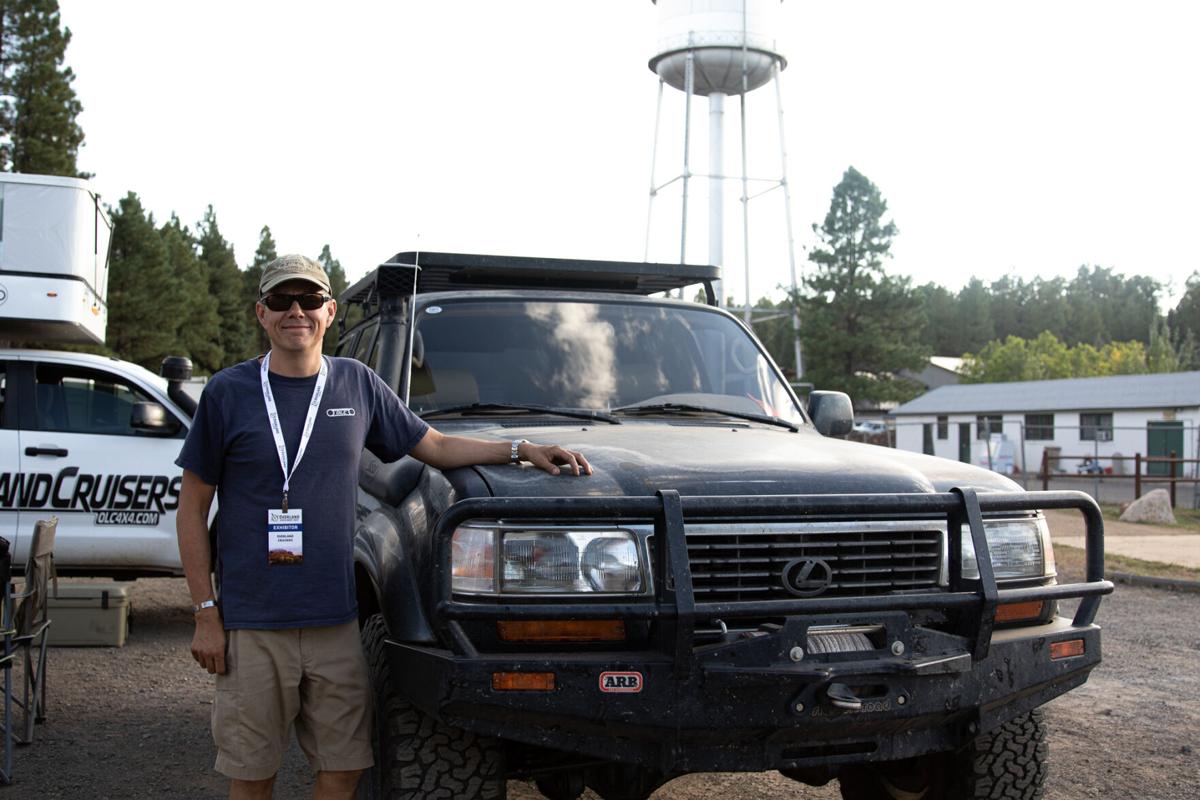 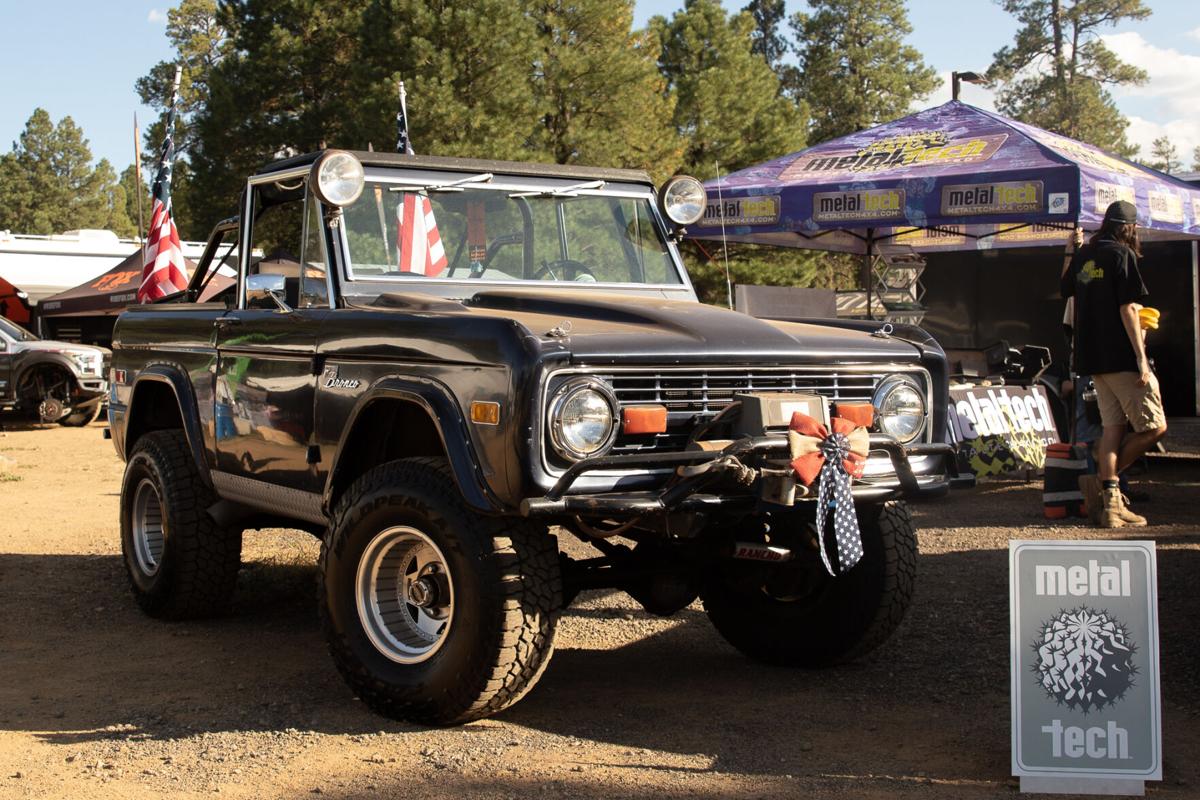 A first-generation Ford Bronco being displayed at the Metal Tech booth, Sept. 24. 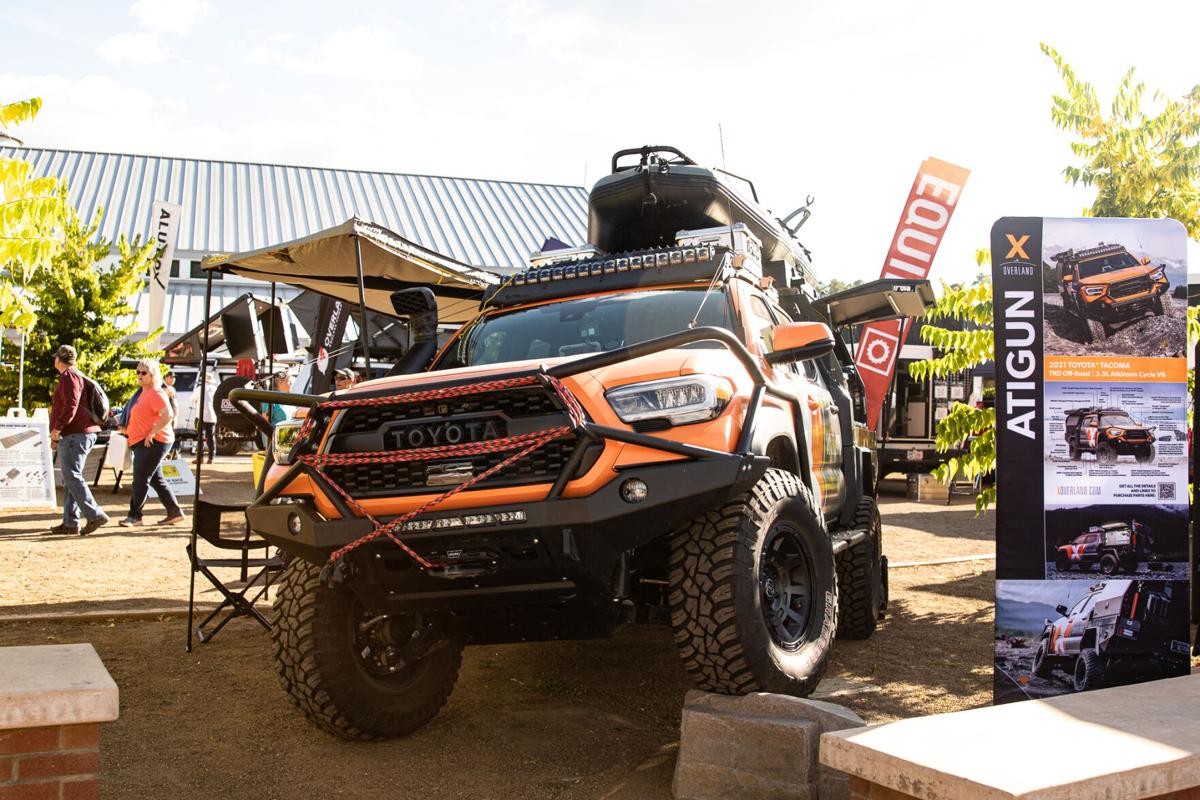 Toyota Tacomas were another popular vehicle for overlanding transformations, Sept. 24. 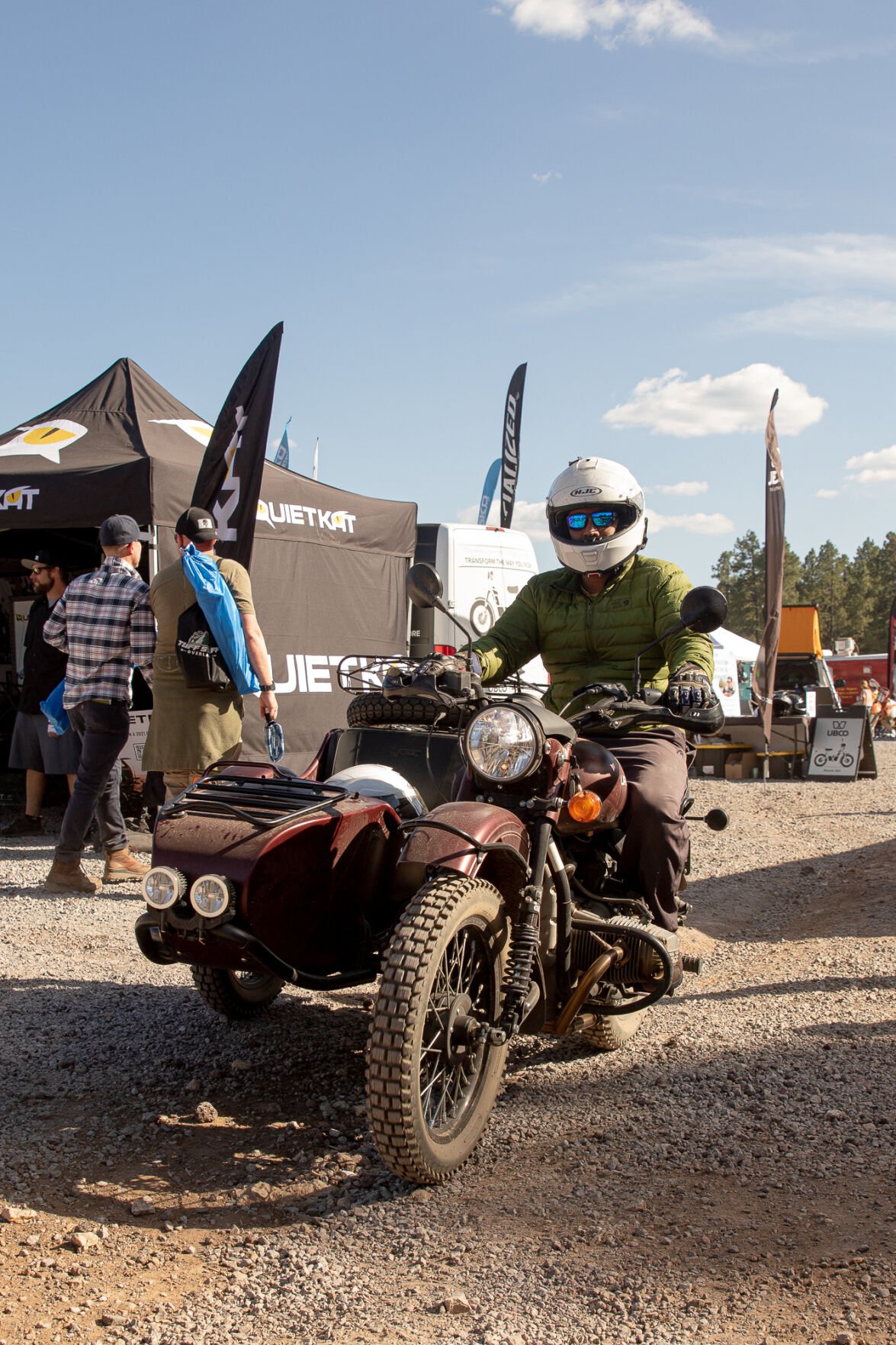 Another attraction at the Overlanding Expo was test rides and drives of the Ural motorcycle, Sept. 24. 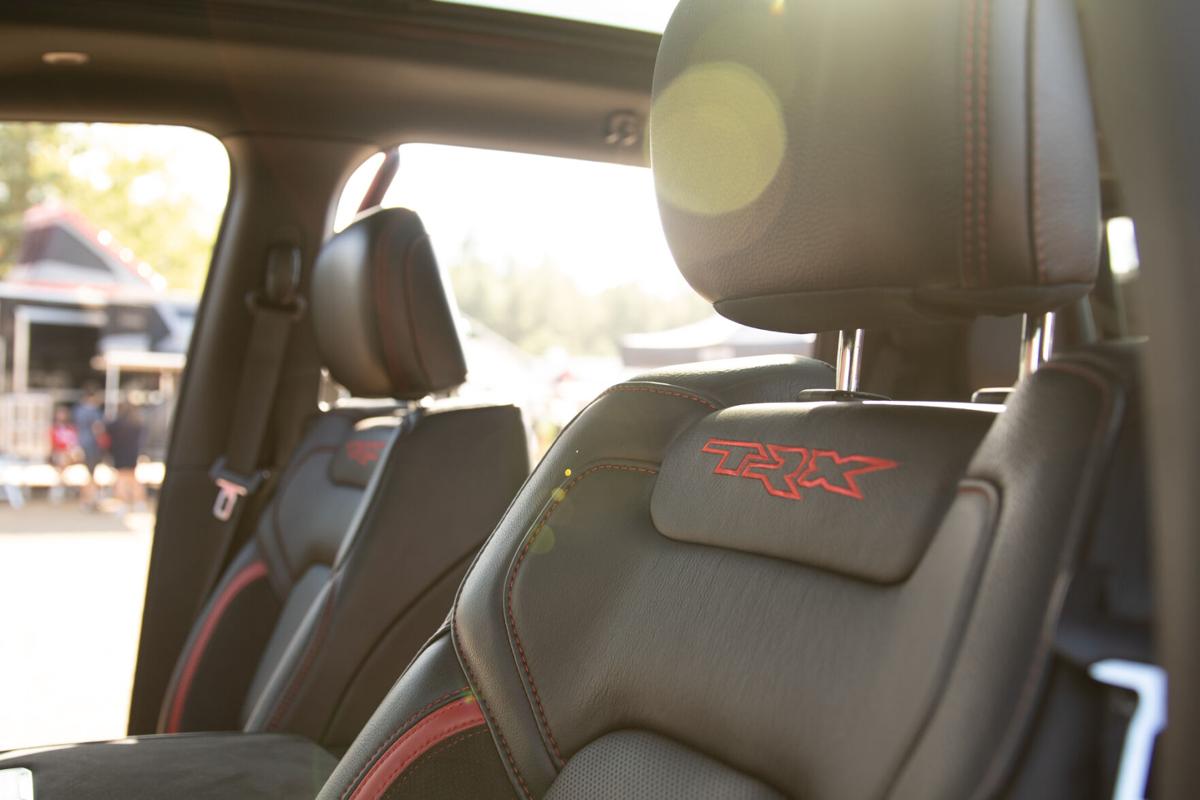 An inside look at the the Dodge Ram TRX, Sept. 24. 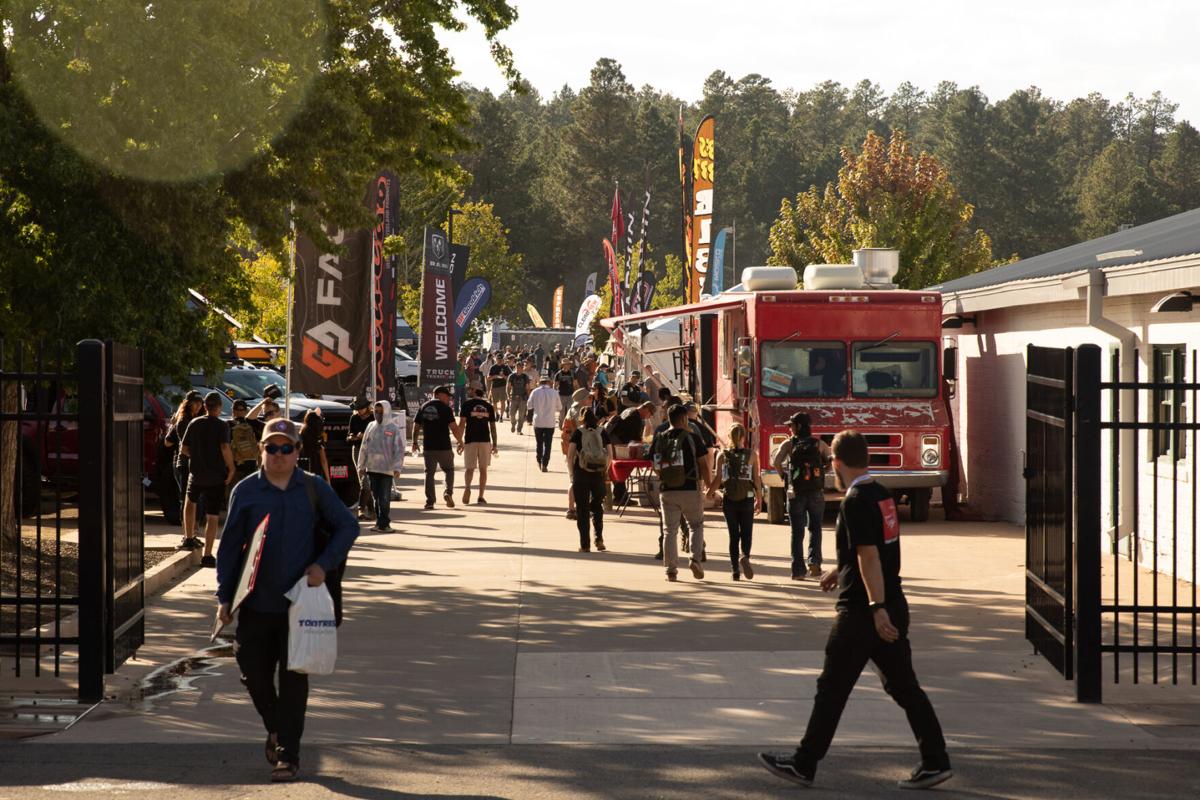 Thousands of people were present over the three days of the Overland Expo at Fort Tuthill, Sept. 24.

A Toyota Tundra showing off its suspension set-up, Sept. 24.

Representative at Midland Radios, Nick Bravo, showing off one of the company's products, Sept. 24.

A first-generation Ford Bronco being displayed at the Metal Tech booth, Sept. 24.

Toyota Tacomas were another popular vehicle for overlanding transformations, Sept. 24.

Another attraction at the Overlanding Expo was test rides and drives of the Ural motorcycle, Sept. 24.

An inside look at the the Dodge Ram TRX, Sept. 24.

Thousands of people were present over the three days of the Overland Expo at Fort Tuthill, Sept. 24.

From the rugged Goodrich tires to the rooftop tents, overlanding has been a continually growing hobby pursued by fans of the outdoors and adventures. From built Wranglers and budget-purpose 4Runners to kitted-out Scramblers, overlanding is something anyone can get into with a little elbow grease. The Overland Expo is a great representation of that mentality.

According to Overland Journal, overlanding is defined as self-reliant adventure traveling, generally to explore remote and rough areas with vehicle-supported methods. Overlanding began as a way to herd livestock across vast distances in Australia’s Outback, but has expanded to encompass exploration across the globe. This can include, but is not limited to, places such as Africa, Mexico, Ireland and even Flagstaff.

Founders Jonathan and Roseann Hanson’s first expo was in Prescott in 2007, according to The Compass. Since then, the popularity has grown into an annual multi-day, various location event that thousands attend. The Overland Expo website now boasts over 400 exhibits which include 300 hours worth of demonstrations, classes, slide shows and activities from over 100 instructors and presenters from everywhere in the world. The expo runs into the night with a film festival and happy hour available to all who attend. People come from all over the world to see and show off creative, innovative builds and tools of the overlanding practice in multiple locations throughout the United States.

The Overland Expo dedicated to the Flagstaff area, hosted at Fort Tuthill and took place Sept. 24-26. Hardcore fans had the opportunity to come on Friday, set up their rigs and enjoy the scenery.

Sophomore Garrett Johnson attended the event with his 2007 Ford F-150. Johnson came with an open mind for everything off road, he said, while looking at other builds and searching for ways to improve his truck.

“I heard about the Overland Expo through social media and off-road exploration YouTubers that I’ve been watching for years,” Johnson said. “I didn’t set many expectations going in, just because this was my first Overland Expo, and honestly it was more than I could’ve ever imagined.”

Johnson said there were hundreds, if not thousands, of people. He and other attendees were present throughout the entire expo experience, ready to be welcomed and embraced by the overlanding culture. Saturday was the biggest day of the event by far, he added.

“My favorite part of the expo was the insane builds and ingenuity,” Johnson said. “Some of these people came up with incredible ideas of how to be more efficient and enjoy the overlanding experience.”

Some larger scale companies also took part in the expo and helped mold the overall experience. Ford came with a heavy presence, not just at its booth but with multiple stalls displaying Broncos. After a 25-year hiatus, the Bronco has returned to give Jeep, Chevrolet and other competitors a run for their money. Ford also provided test rides through rough, uneven terrain to show off the stock model.

Harley Davidson had a booth dedicated to its new 2021 Pan America 1250 Special. A fresh and purpose-built configuration with nods to the original design, the Pan America is aiming to compete with other top adventure bikes. At the event, Harley representatives described how state-of-the-art the new Pan America is, with double the horsepower and a weight of 534 pounds, along with adjustable front and rear suspension. With a valid motorcycle endorsement, attendees could take the Pan America for a test ride around the course.

Dodge was also present to show off the Dodge Ram TRX, a 702-horsepower beast created to conquer the Ford Raptor and others in its way. Although other manufacturers such as Jeep and Toyota were absent, companies with outfitted Wranglers, Gladiators, Tacomas and Tundras were available for display. As the bar is constantly raised higher, manufacturers play tug-of-war in an attempt to win customers.

On the opposite side of the manufacturers, vehicle builders were in attendance, showing off hot-rodded versions of classic and modern vehicles with the overlanding twist. Everything from Defenders ready for the Rocky Mountains to Landcruisers prepared for safaris was showcased at the event.

Owner of Overland Cruisers, Johnny Schaefer, has made a career modifying and improving classic Toyotas.

“We do everything from disassembling them down to every little last bolt and rebuilding everything to Toyota specification and then putting it all back together to just make them more capable for off-road adventure and overlands vehicle use,” Schaefer said. “[We pay attention to] carrying equipment, recovering gear [and] modifying them to suit whatever the user is gonna use it best for. Everybody’s use is different.”

Classic and vintage vehicles are staples of the overlanding culture, but repairing and upgrading them can be an obstacle — between finding the correct part to fit an era-specific build or mix-and-matching others to get the most out of a vehicle. Schaefer said his business tries to utilize parts from modern land cruisers that will still work in older vehicles, though they are modified if need be.

“We source a lot of our parts from overseas,” Schaefer said. “A lot of parts from the Middle East and a lot of parts from Europe because you figure, let’s say a transmission was last manufactured in the ’70s. Somebody somewhere [has] one of them in a box. It’s just a matter of finding it and getting it. Now you got a brand new one. It takes a lot of time.”

Not only were automotive companies and builders present, but accessory parts and outfitting companies also attended. Johnson said his favorite was the Expedition Overland booth, because everyone was welcoming and helpful — in addition to giving out stickers and pamphlets.

When overlanding in unexplored frontiers,  communication is key for individual and group expeditions alike, especially in pursuing safety. Midland Radios was present for the first time at the expo, providing information on its top-of-the-line radios. Nick Bravo, a representative and tour manager of Midland Radios, said the company’s purpose in attending the expo was to educate guests on the importance of their products.

“Obviously safety’s number one — that’s what we do — but people use them for all different things,” Bravo said. “Snowboarding, hide and seek ... we had a farm show that we went to where someone used our radios for tractor musical chairs. So just really crazy stuff that you can use our radios for.”

For all the vendors and companies at the expo, the primary purpose of their products is to be self-sufficient in the backcountry, Bravo said. Whether it be different tools, long-range radios or various vehicles for unexpected circumstances, Bravo explained the importance of designing efficient and reliable products.

“We also have [high quality radios] which have five watts of power, and that will get you about a five-mile range,” Bravo said. “If you’re on open [areas] like saltwater flats, or if you’re around an ocean or open water, or mountain top to mountain top, you can actually get up to 36 or 38 miles — but that’s in perfect conditions. If you’re off-grid and in the middle of nowhere, we can’t really rely on cell phones, so radios are more important to have.”

For a society of adventurers, outdoorists and explorers, there is seemingly no better place to host an event of this nature than the home of the Lumberjacks. With millions of acres of public land begging to be explored all around the world, having a convention for like-minded individuals to convene, collaborate and create friendships can be rewarding to participants. When running low on fuel in a personalized Landcruiser, having the ability to radio a nearby Rambler might just be a saving grace in a time of need. For a fellowship whose goal is the journey and not the destination, many can learn from those who claim the overlanding lifestyle as their own.