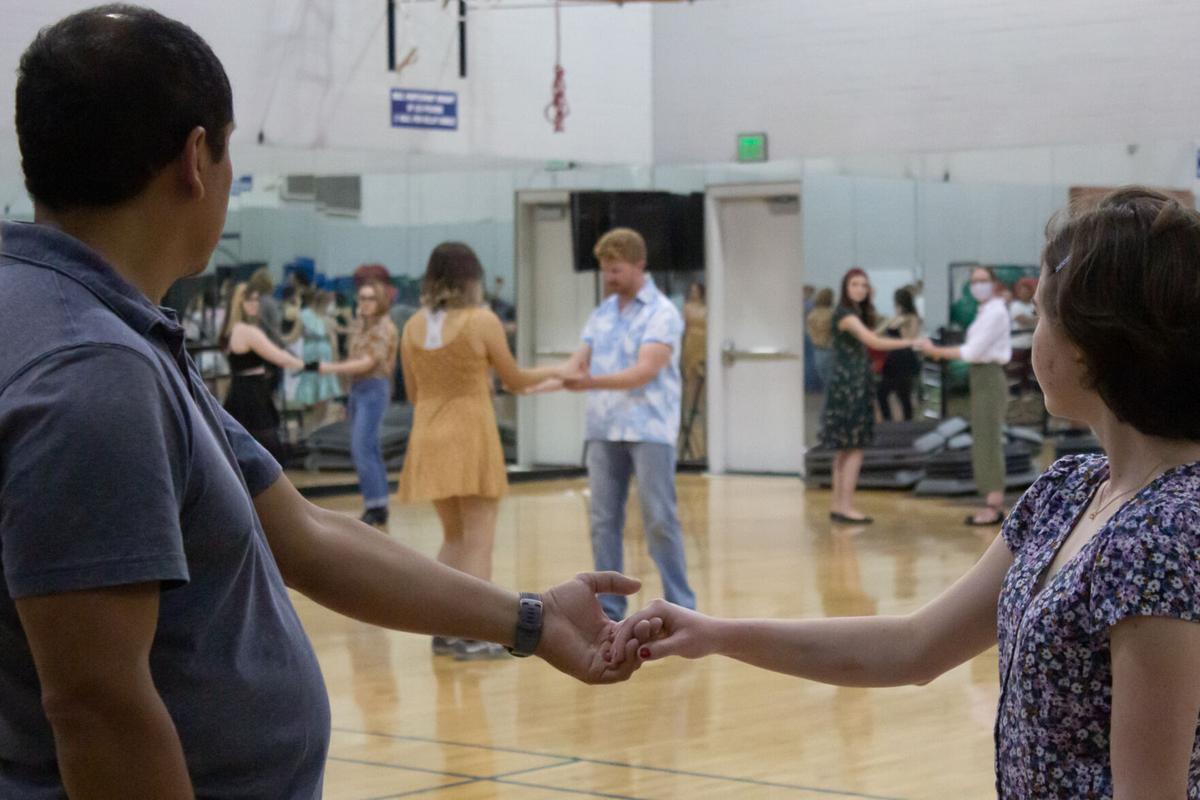 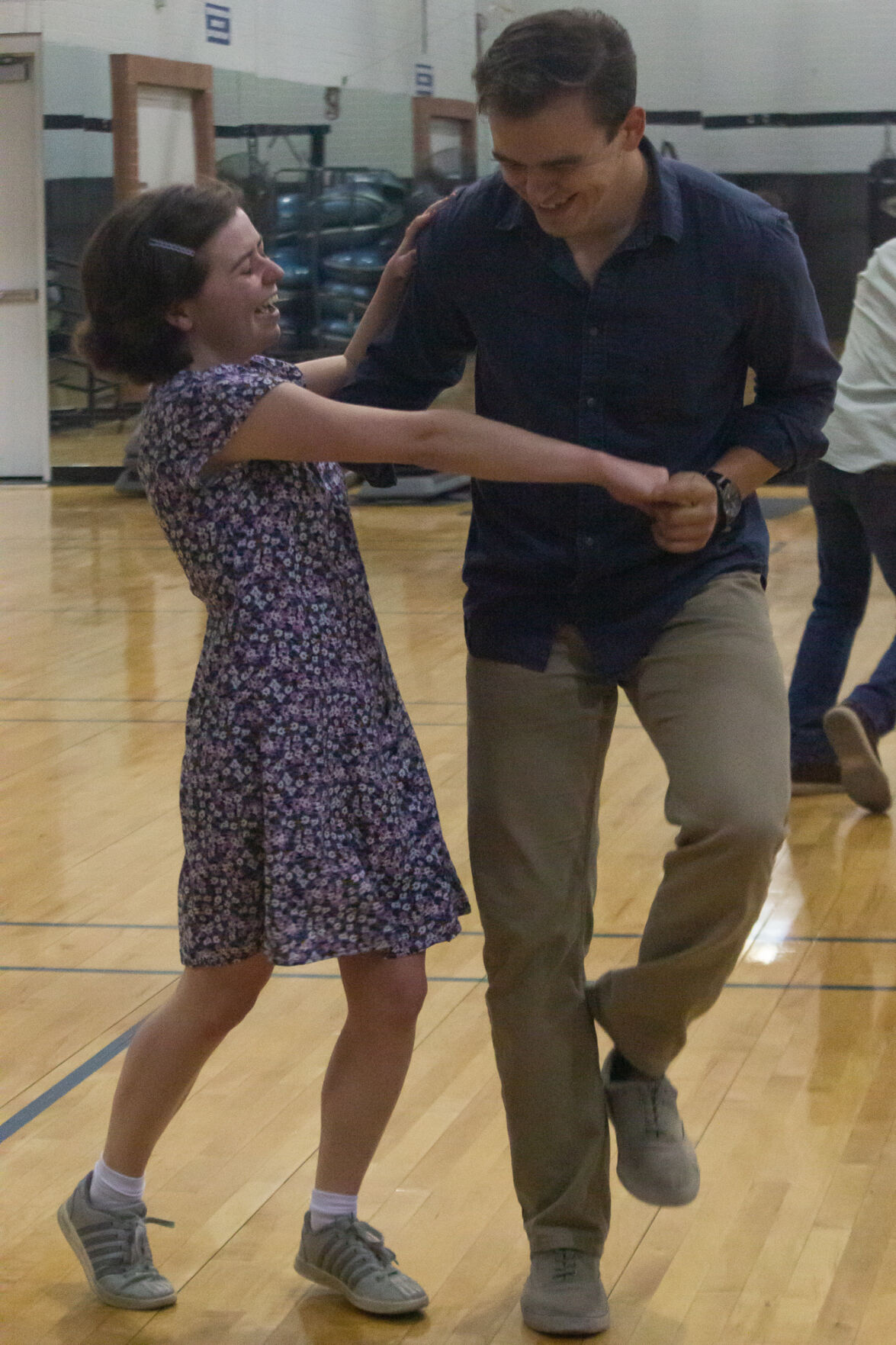 Dancers Eric Santoro and Alice Pratt fly around the gym as they dance to a variety of swing songs during Swing Saturday, Sept. 18. 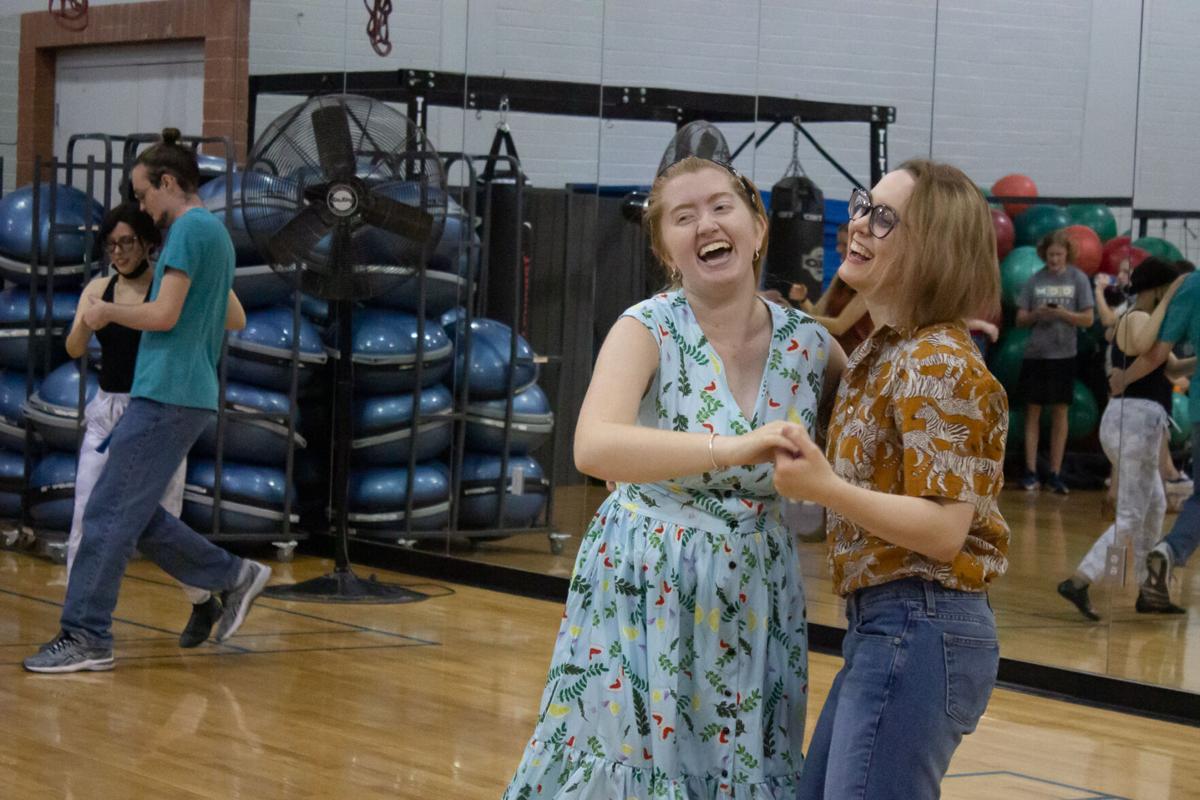 Duo Annastasia Baldwin, right, and Cynamin Newell, left, laugh as they try out some new moves at Swing Saturday, Sept. 18. 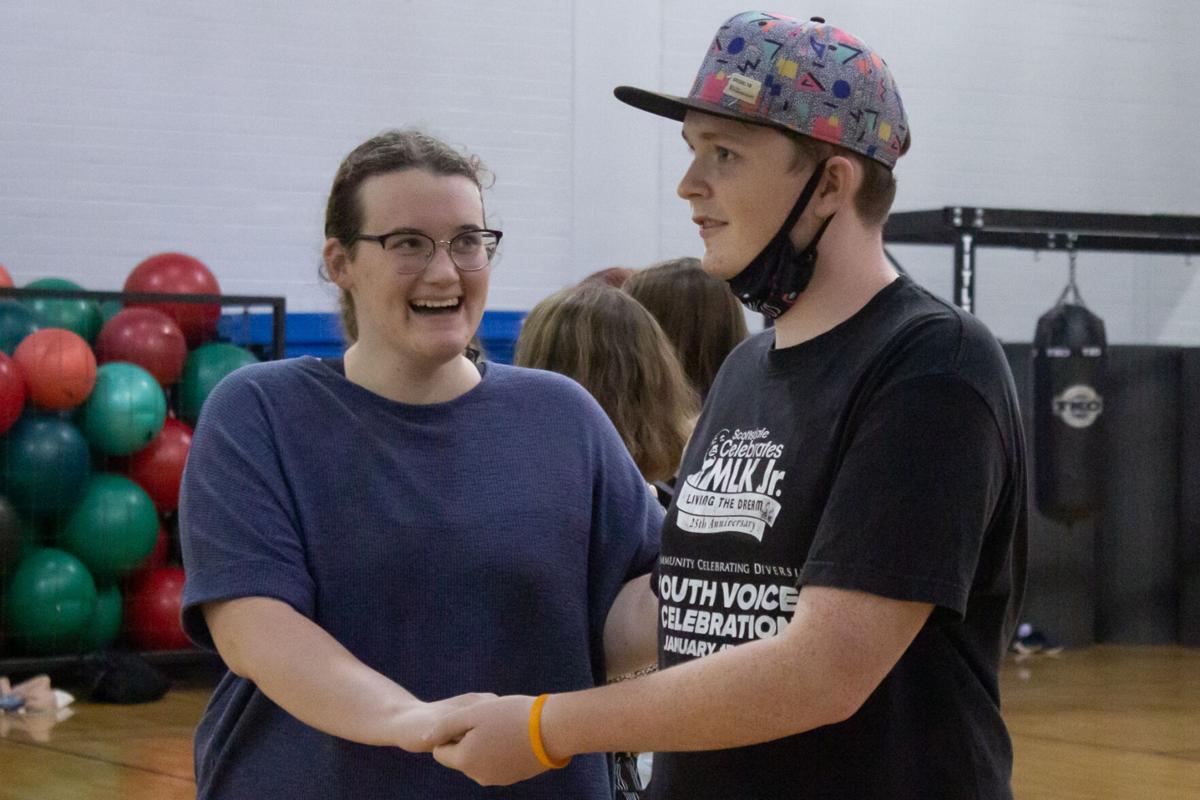 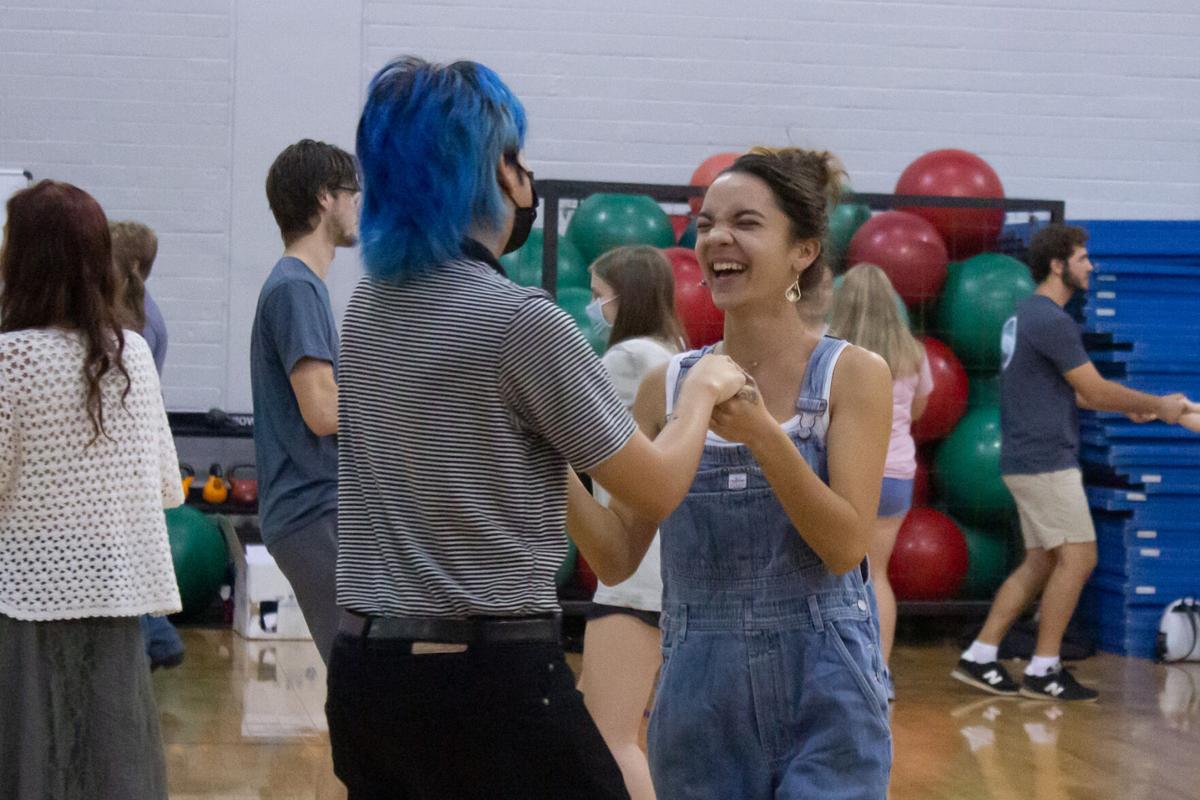 Swing Jacks attendees practice their newly learned steps with each other, Sept. 18. 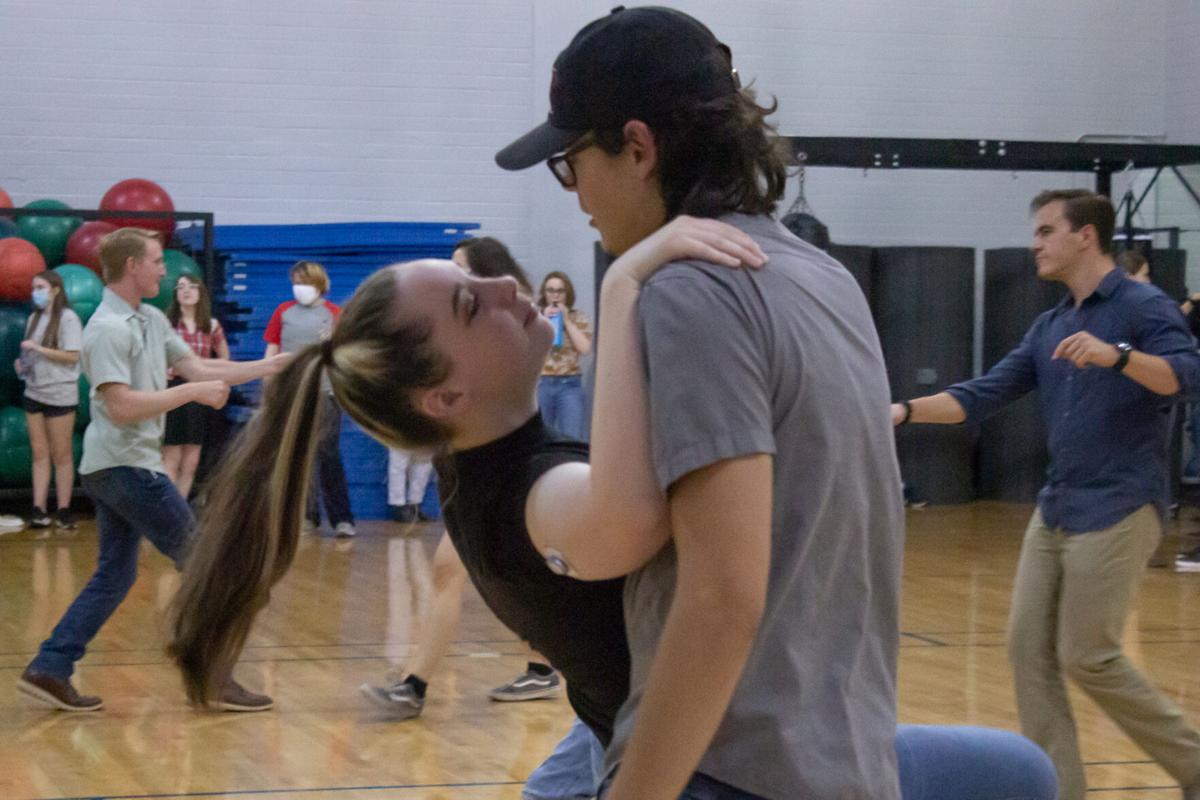 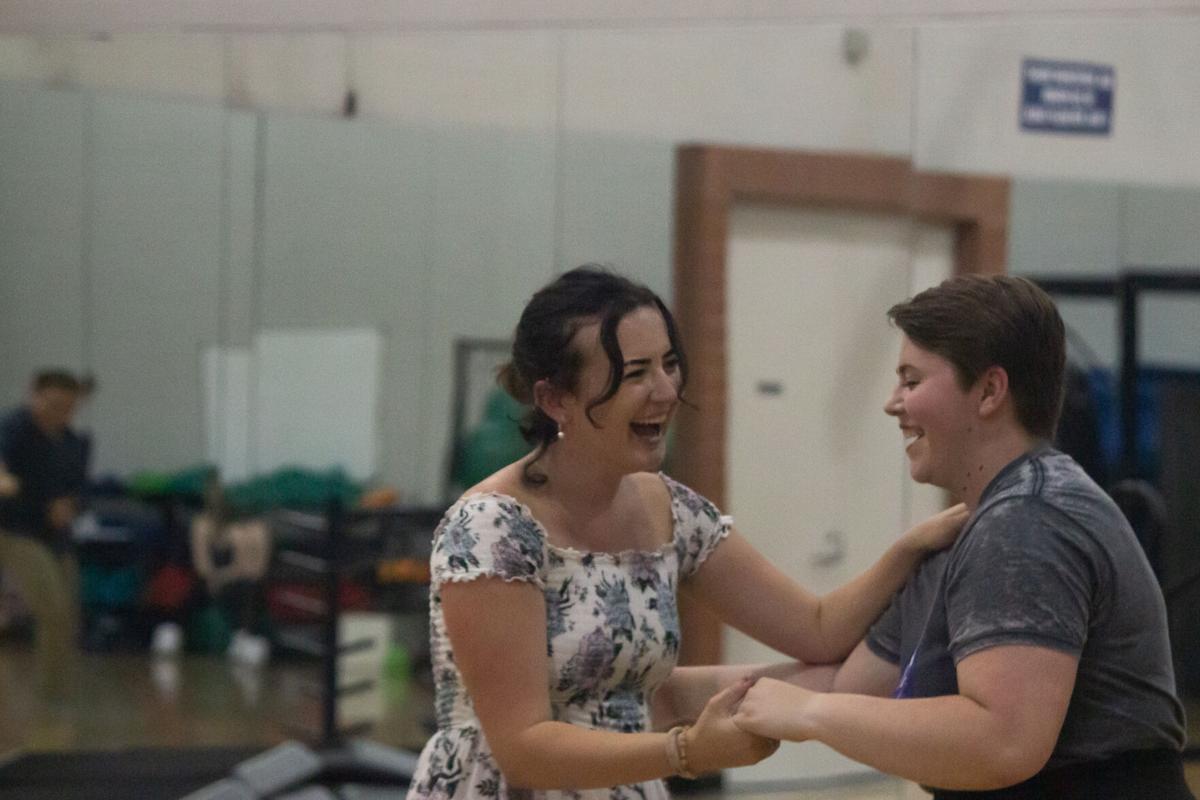 Freshman Allison Dashiell and senior Kailyn Woodie smile and dance together as they try out some new moves during Swing Saturday, Sept. 18. 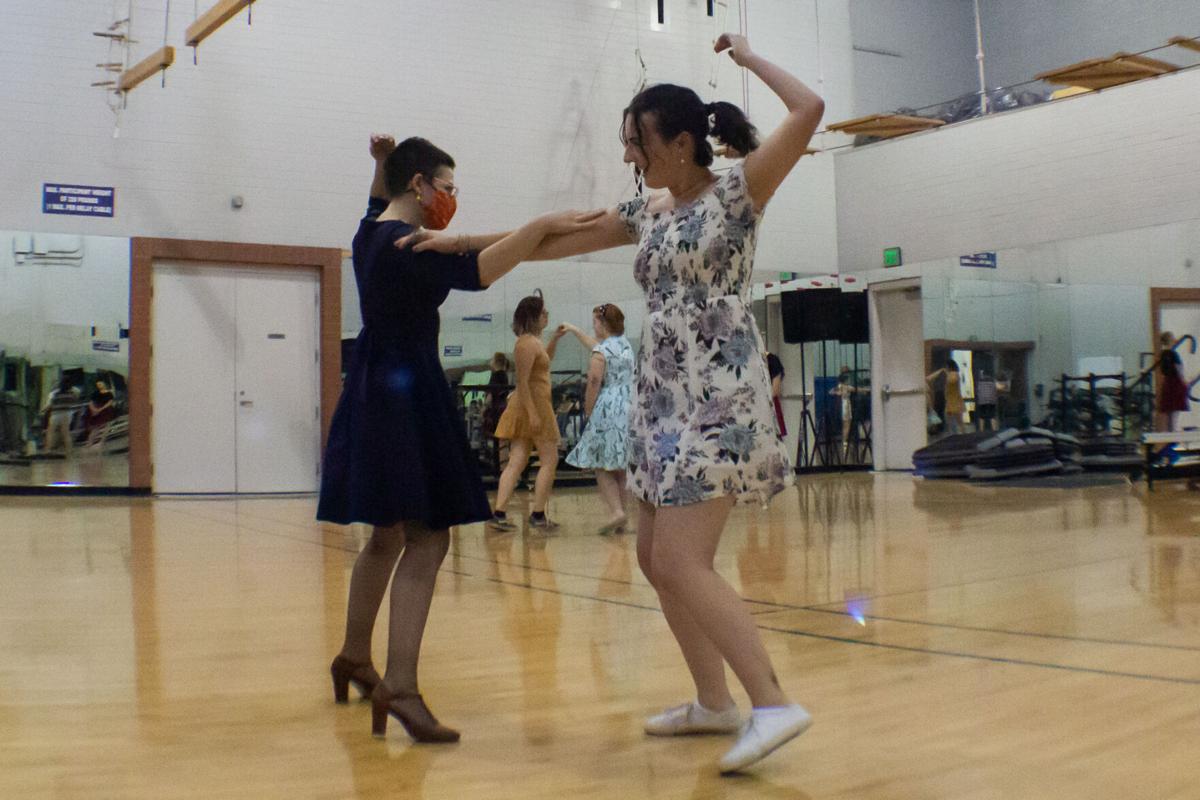 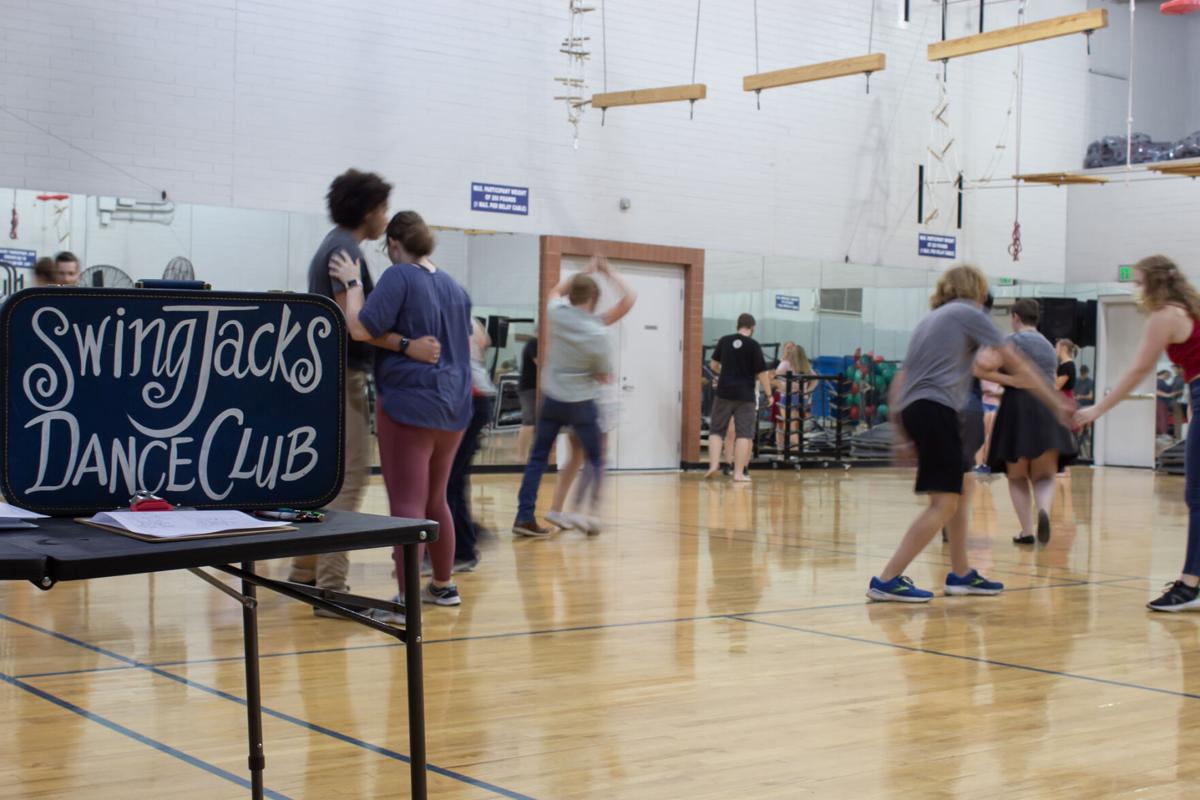 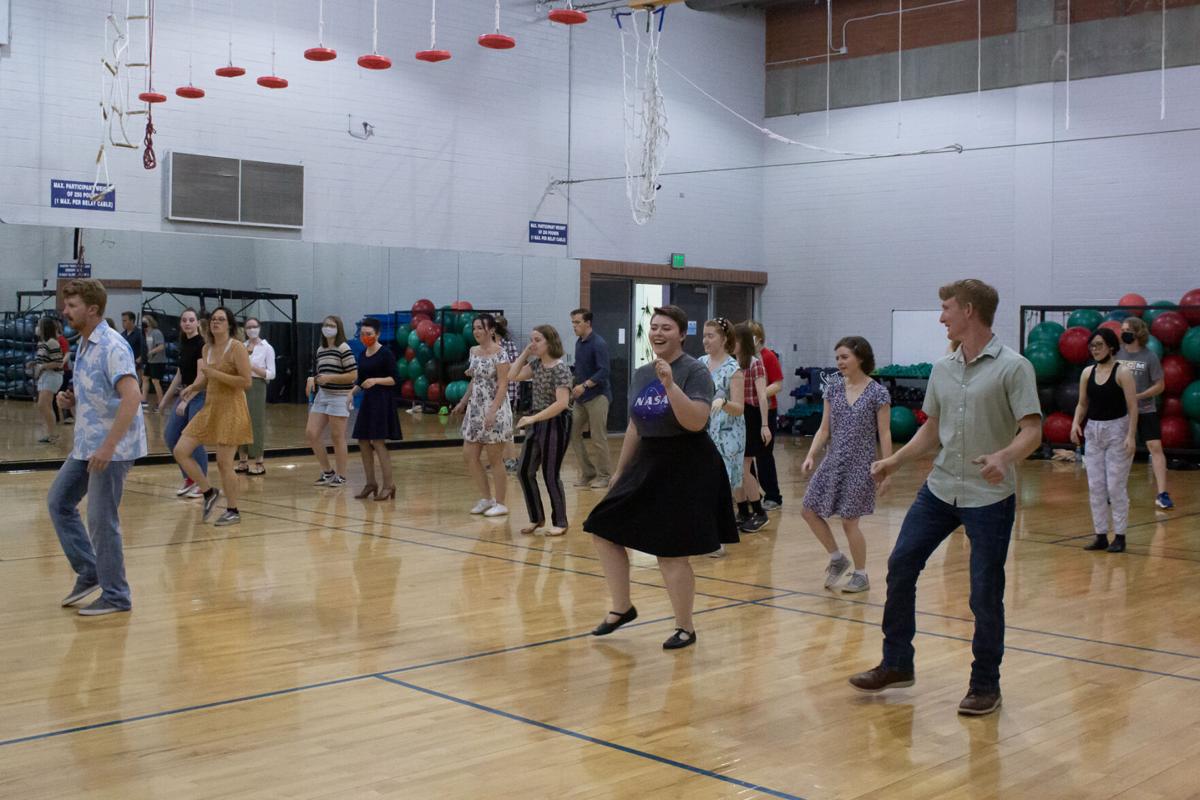 Dancers Eric Santoro and Alice Pratt fly around the gym as they dance to a variety of swing songs during Swing Saturday, Sept. 18.

Duo Annastasia Baldwin, right, and Cynamin Newell, left, laugh as they try out some new moves at Swing Saturday, Sept. 18.

Swing Jacks attendees practice their newly learned steps with each other, Sept. 18.

Freshman Allison Dashiell and senior Kailyn Woodie smile and dance together as they try out some new moves during Swing Saturday, Sept. 18.

Anyone can dance. At least, that’s what the Swing Jacks believe. This is a club where everyone is welcome to try and pick up some moves. Senior Blake Wene is the co-president of the swing dance club and although he has not always been one with the beat, he picked up skills along the way.

In less than two years, Wene said he climbed the ranks from a new member to co-president, despite the many setbacks of learning to dance and struggles within the club. His history with swing dancing started with his wrestling days. As a wrestling veteran of 15 years, he placed at nationals and took third at state.

Upon graduating high school, he explained he moved from his hometown of Laveen, Arizona, to Flagstaff. Like most other students, he chose NAU because of its beautiful scenery, weather, closeness to home and the change of pace it offered. Into his second year at NAU, his good friend and wrestling teammate, Ben Meyer, introduced Wene to swing dancing.

During his sophomore year, Wene said he decided he wanted to learn to dance and reached out to his friend Meyer for information that pointed him in the direction of NAU’s local swing dance club.

“It was a little discouraging to watch the people I started with move ahead faster than I did, but I still attended every practice, worked on my technique and asked people to dance even though it was nerve-racking at first,” Wene said.

He explained one rehearsal, in particular, stood out to him as tough; during a practice sophomore year, the coaches for the dance club explained one of the dances — the Lindy Hop — was a six-count swing dance.

“All I could think was that I had absolutely no idea what that meant or what we could possibly be counting,” Wene said. “Turns out it was the beats of the music.”

Coaches and club members told him he was one of the slowest members to pick up dancing and  he said it did not come naturally, but this never discouraged him. Wene marked it as absurd that he went from a clueless dancer to the club’s president.

After months of working hard and attending every practice possible, he was able to get the basics of dance down. By the end of his first year, he improved dramatically and explained he considered himself pretty good. Now, he is expanding into different dance styles such as Latin, blues and country swing.

However, Wene faced other struggles besides learning how to dance. The challenges continued when COVID-19 hit, leading to practice and event cancelations. Additionally, in 2020, nearly every board member of the club graduated, and only five remained.

Wene said he was one of the only members left to continue the club. He quickly ascended from a new member to the co-president and has held the position ever since.

He didn’t climb to the top alone, junior Mackenzie Sumrall was right behind him. She explained the two were thrown into the co-presidency at the end of last semester, at a time when only four active members remained.

“COVID had a really significant impact on our club,” Sumrall said. “First, for an entire year and a half we had no events. Most of our club officers and pillars of the Flagstaff swing community also graduated last spring.”

This semester, one of the main challenges has been rebuilding membership and reorganizing the club. Through tabling at club fairs and hanging up posters around campus, the club has quickly multiplied from four to 40, Wene added.

According to the Swing Jacks Dance club website, an event called Saturday Night Swing is hosted every Saturday at 3:45 p.m. in NAU’s Health and Learning Center (HLC). With the club now on more stable ground, Wene has been channeling his past struggles with learning to dance into helping new members learn, either at group events or in the form of free private lessons. He said the first step is simply showing up, no matter how much, or little, experience one has with dancing.

The excuse of not being able to dance does not fly in this club. Wene explained the first step is always the hardest, but it has to be done.

“Experience has taught me that you may have no rhythm, coordination, or background in dance, but it doesn't matter so long as you show up and start practicing you can learn how to dance,” Wene said.

Freshman Kenia Luque, is an active member of the club and said she has only known Wene since the start of the semester, but they are good friends. She explained that he made her, and other new members, feel very welcome in the club — like she belonged.

“Blake is really caring, and you can really see it, some people can really fake that,” Luque said. “Even though he is the president he tries to include everyone and make everyone feel welcomed. The Swing Dance Club has become more like a family than a club.”

Through all the business of school, clubs and life, Wene is looking forward to graduating soon. He said that assuming all goes well, and he finishes all his requirements for his major and minor, he will graduate in May 2022. After graduation, he plans on taking the Law School Admissions Test (LSAT) and hopes to attend law school at ASU.

Wene also said he plans on continuing to swing dance. His departure from the club will leave the presidency in Sumrall’s hands. The dancers will continue to change as members graduate, new officers are elected and other students take on the challenge of learning new steps.