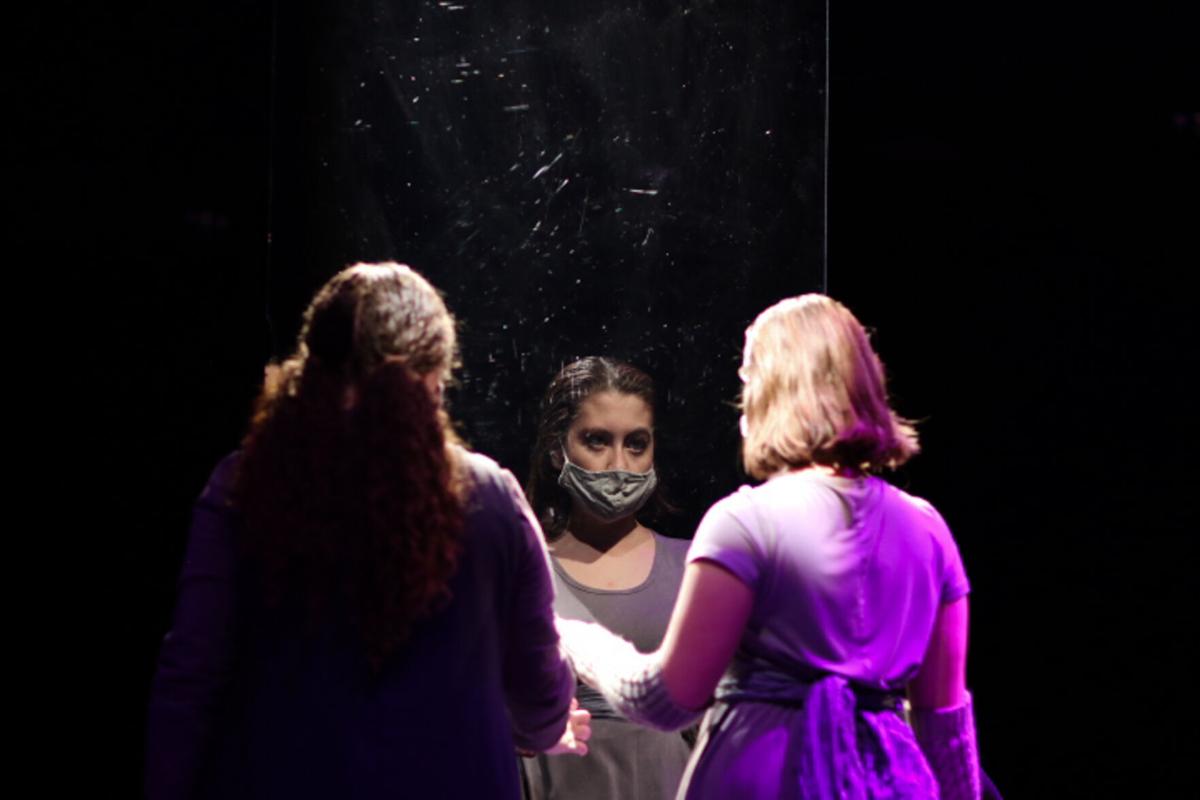 Emma Gasior in the spotlight during a dress rehearsal for "Moving Through Grief," a Production hosted by NAU’s Department of Theatre, Nov. 16. 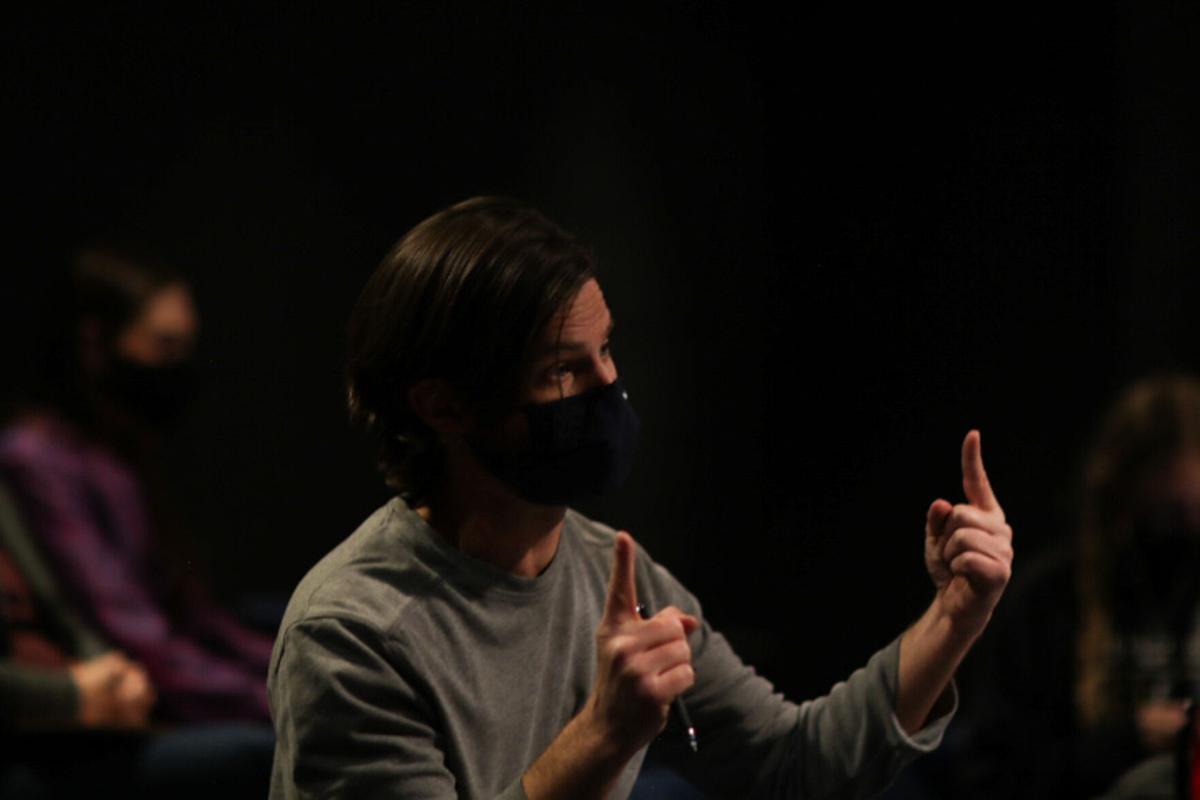 Nathanael Johnson, Professor at NAU’s Theatre Department and director of "Moving Through Grief," explaining and breaking down a scene, Nov. 16. 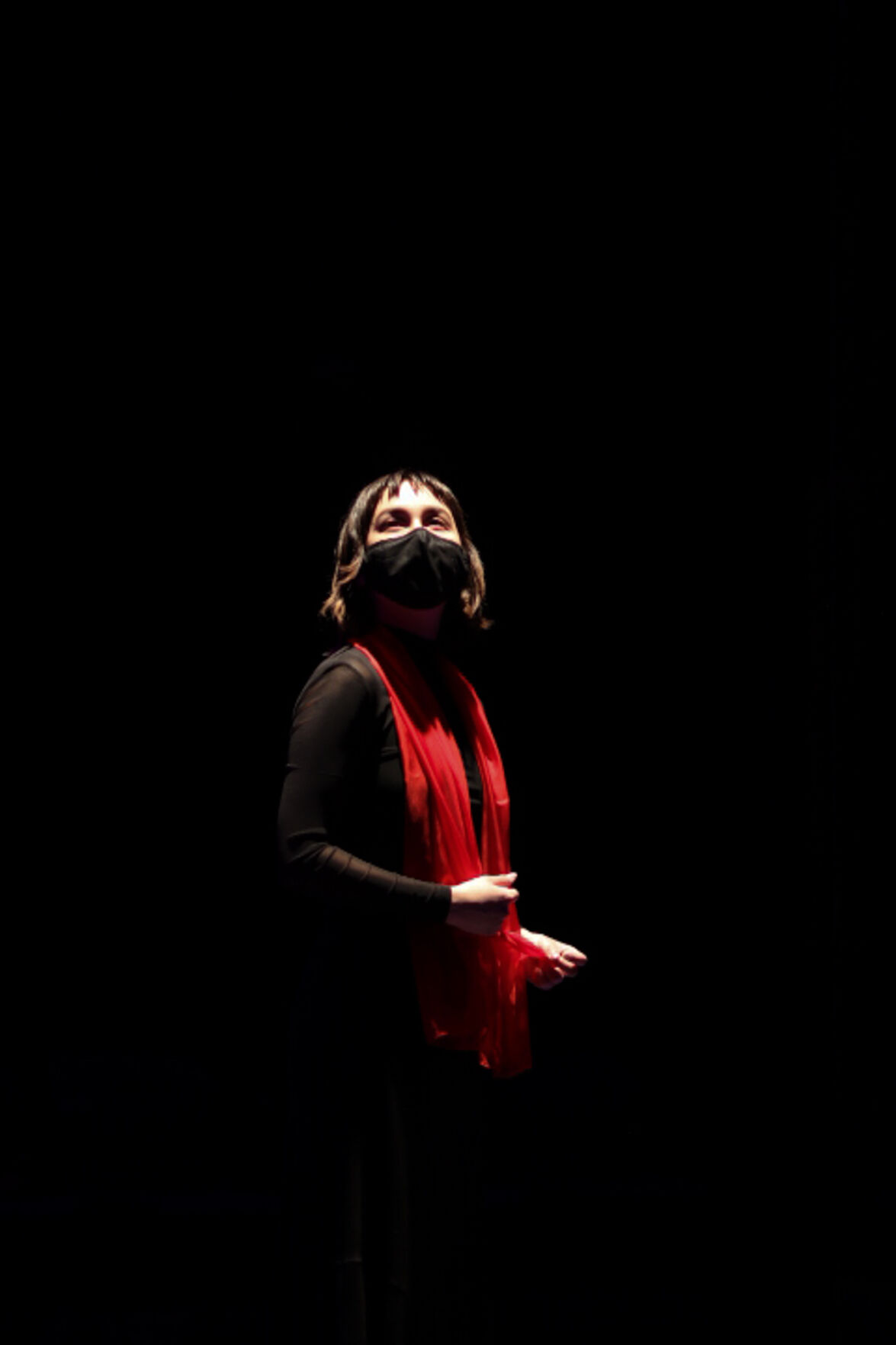 Chaiah Durst, performing a scene in "Moving Through Grief," Nov. 16. 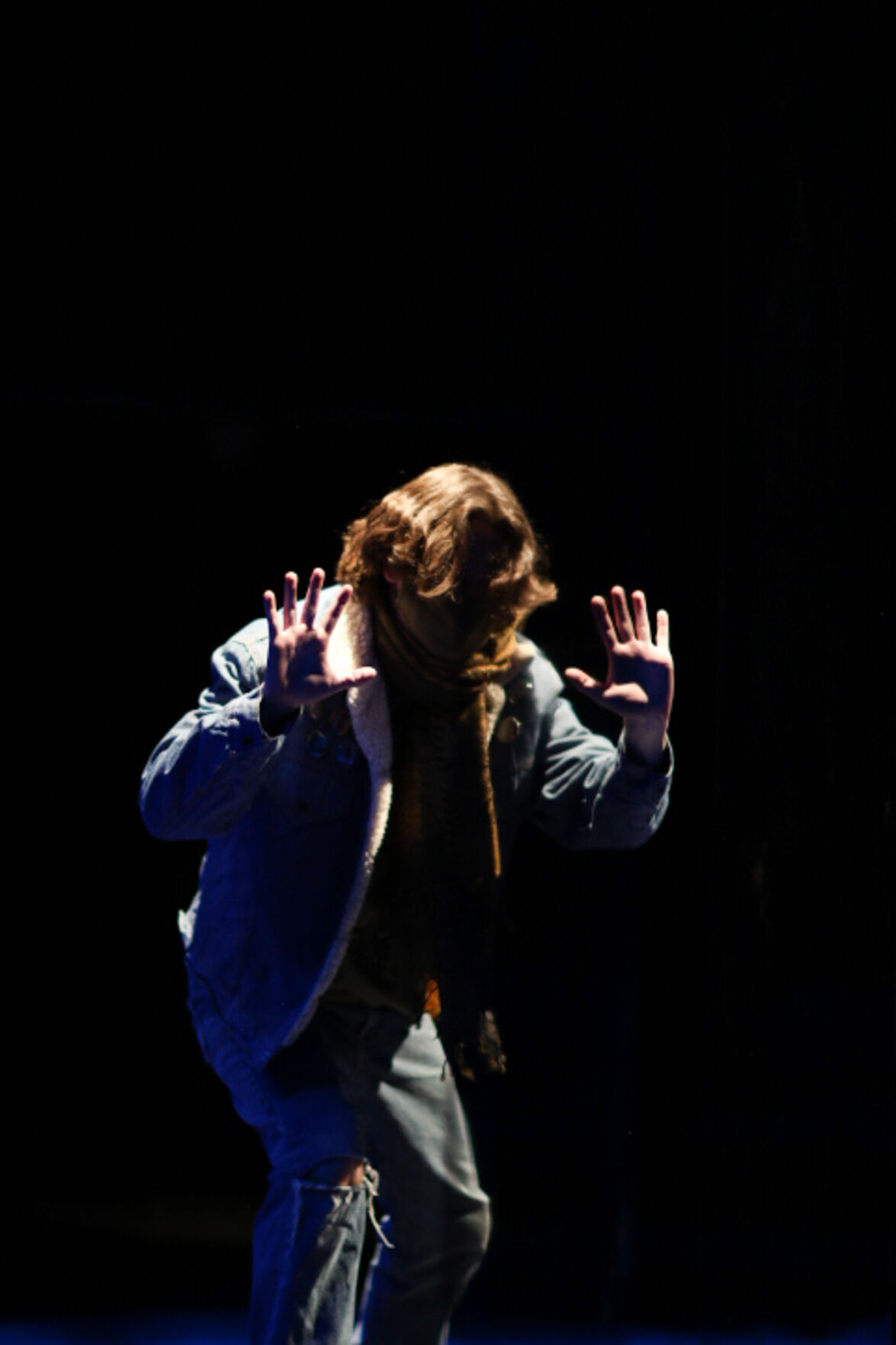 Casey Young performing a scene in "Moving Through Grief," Nov. 16. 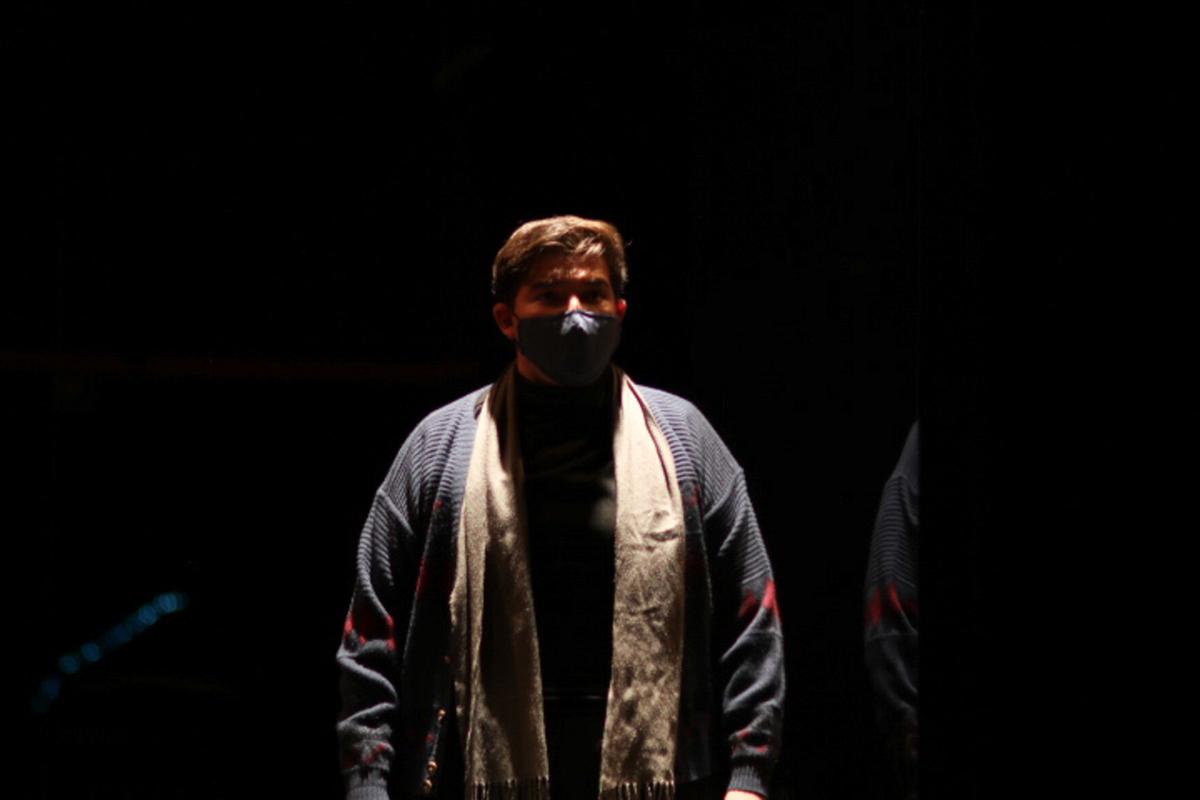 Fernando Rubio, running through lines for "Moving Through Grief," Nov. 16. 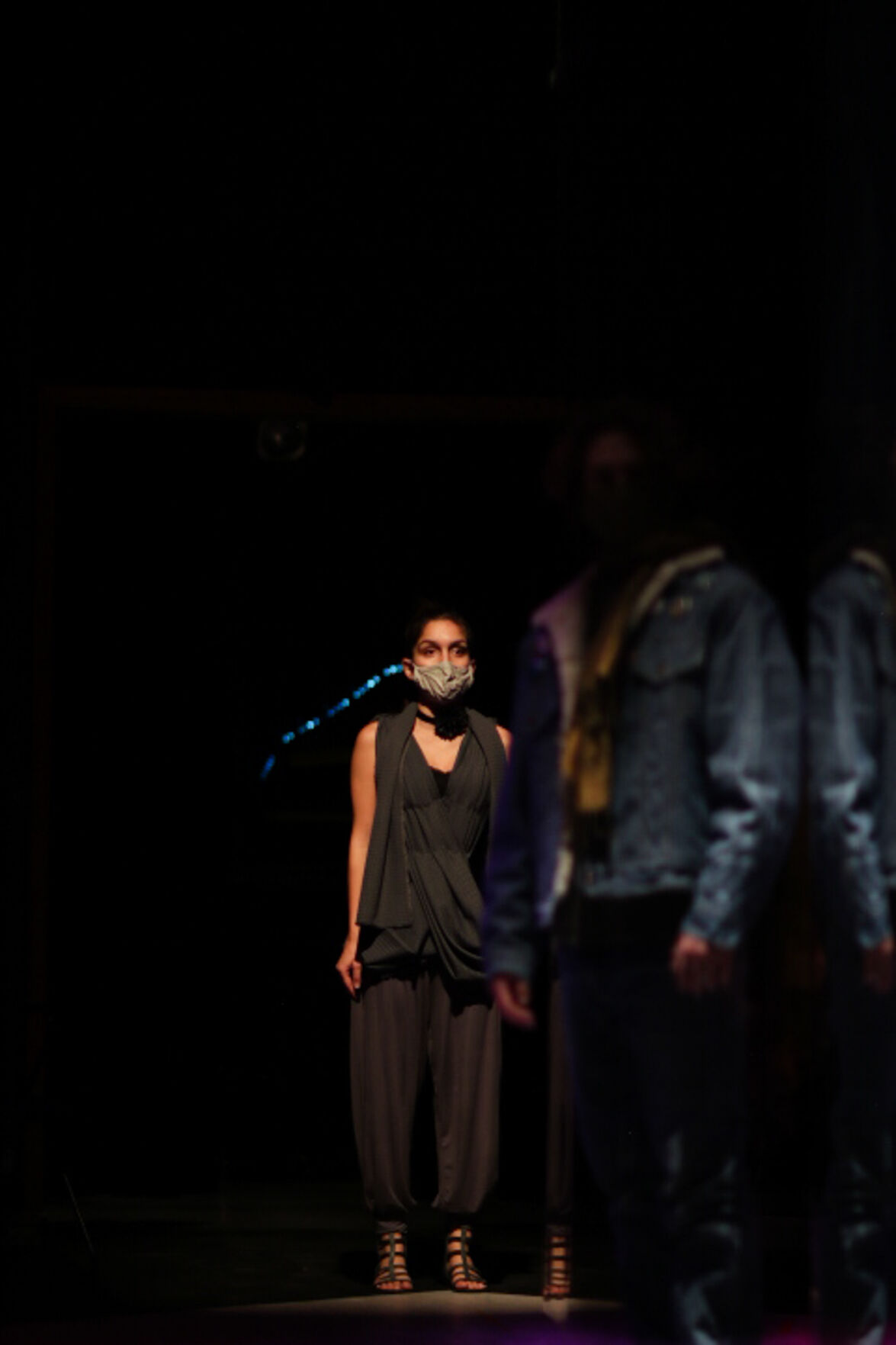 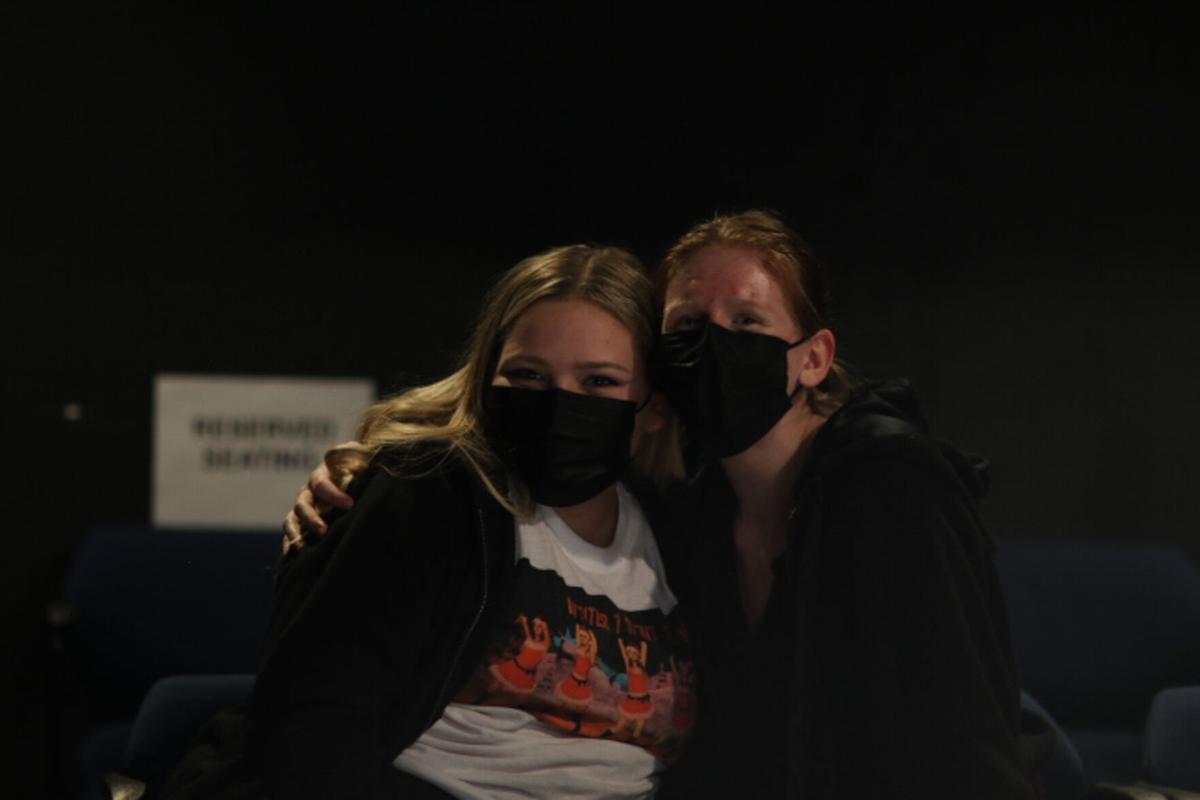 Holly Glave, Actor, and Mary Ryan, House Manager, posing for a photo at a "Moving Through Grief" Dress Rehearsal.

Emma Gasior in the spotlight during a dress rehearsal for "Moving Through Grief," a Production hosted by NAU’s Department of Theatre, Nov. 16.

Nathanael Johnson, Professor at NAU’s Theatre Department and director of "Moving Through Grief," explaining and breaking down a scene, Nov. 16.

Chaiah Durst, performing a scene in "Moving Through Grief," Nov. 16.

Casey Young performing a scene in "Moving Through Grief," Nov. 16.

Fernando Rubio, running through lines for "Moving Through Grief," Nov. 16.

Holly Glave, Actor, and Mary Ryan, House Manager, posing for a photo at a "Moving Through Grief" Dress Rehearsal.

The NAU Department of Theatre is showcasing its first mainstage devised theatre project as one of the program’s two semesterly mainstage shows. According to the director's note, devised theatre is a method of theatre making where the story originates from collaborative work by an ensemble.

Nathanael Johnson, a theatre professor and director of the show has been in charge of the production. The project has allowed students to create a story through experimentation, allowing their creativity to shine through, Johnson said.

“A devised project means there is no script, it originates from collaborative work,” Johnson said. “It allows students to think more abstractly. It’s thought of as a non-linear form of story-telling, which is told through image, dialogue and spoken words.”

This opportunity is open to students across the NAU campus and is not limited to theatre students, Johnson said.

The process began in the last week of August, Johnson said. To start off, there were exercises to build collaboration. The next aspect of the show involved creating moments without context, which were inspired by the architecture of theatre, randomly pulled props, costumes, light, text and sound.

According to Johnson’s director’s note, if an improvised scene made them sit forward in their seat, they would discuss and document it. After they had gathered the most interesting moments, they would play around with putting them together.

After the cast and crew decided on the theme of loss, “Moving Through Grief” was born. The director's note explained that once the theme was decided, they began gathering source material on grief —  which ranged from poetry, spoken word, academic articles, personal accounts, music and images.

A story was then created based upon everything that the cast wrote and acted out. Much of what will be on stage will have either been a moment that was created at some point in the process, or something that was inspired by the student's imagination, Johnson said.

Senior Holly Glave was cast for the devised theatre project. She is playing a younger sibling, who tries to connect with her older sibling after the loss of their mother.

“This is my second mainstage production at NAU,” Glave said. “I was lucky enough to be in a devised theatre class last semester, so it is very cool to be able to incorporate what I learned in that class on a larger scale.”

Glave said her passion for theatre started when she was in high school and her love for the stage has grown ever since. She knew she would not be able to live without it in her life, Glave explained, and there was no doubt in her mind that she wanted to major in theatre.

When the shows for this semester were announced, Glave said she knew she wanted to be in the devised piece. She said she felt as if she had so much more to learn about devising.

Glave said she has been preparing all semester for the project’s debut. It’s relatable for everyone, especially after the last year of the pandemic, Glave said.

Everyone in the cast and crew has a personal stake in the production, and Glave said she is hoping the audience is able to relate to the story as well.

Since there is no set script to follow, Glave said she finds devising to be a fun and flexible process.

The order of the show’s creation began with forming moments and then figuring out what moments stuck with individuals and why. Then, the selected theme is explored and a script is formed from that theme, Glave explained.

“Theatre is open to everyone, not just specific people,” Glave said. “The whole point of theatre is to bring people together, whether it is the cast and crew or the audience.”

The cast all had a say as the project came together. Glave said she felt lucky to be a part of this as everyone has been on the same page and worked together.

The process is long and the cast is in rehearsals for double the amount of time for a normal mainstage show, Glave said. However, the lengthened time also allowed those involved to figure out the story they wanted to tell and create a set script by the time rehearsals began, she explained.

Rehearsals for the show were typically three hours a day for five days a week. Though this may seem like a big time commitment, Glave said she had so much fun with it and would not trade it for anything.

Senior Chris Mort is the costume designer for “Moving Through Grief.” He is, therefore, responsible for drawing from the story and characters the cast created to design costumes that line up with the storyline.

Devised productions are great ways to tell new and personal stories, Mort said. This is Mort’s first year doing a devised piece for a mainstage production, though he has some previous knowledge with a devised theatre class that he took in the past.

“This gave the actors, directors and production team much creative freedom as compared to producing plays that have already been written,” Mort said. “We get to draw on our own lives and research and collaborate to make something new.

Mort found the designing process for “Moving Through Grief” to be very interesting. Typically, the show is designed before the actors are even cast but, with this process, Mort had to wait for the characters to emerge from the story process itself. He interviewed each of the actors to understand their character and said he designed from there. Mort said the process was more collaborative, as he worked with the actors to find signature pieces for them.

The process took place over the course of the semester and Mort said he began designing at the end of October — costumes were completed by the first week of November.

“The way the world has changed in the past two years has driven NAU theatre to approach the theatrical experience in new ways, this is perfect for people who want something new,” Mort said. “The theme of this piece is the process of grief. The pandemic provided much inspiration from significant loss and how to move forward.”

“Moving Through Grief” performances will be held in the Studio Theatre November 18-20 at 7:30 p.m. and November 20-21 at 2:00 p.m. Tickets are available through NAU’s Central Ticket Office or can be bought in person at the University Union ticket office.

The devised project was created from the ground up by students ready for the spotlight and willing to put blood, sweat and tears into the production. All this work has involved the collaboration and dedication of people who have a passion for theatre. Creative theatre students have effectively devised a new way to come together.