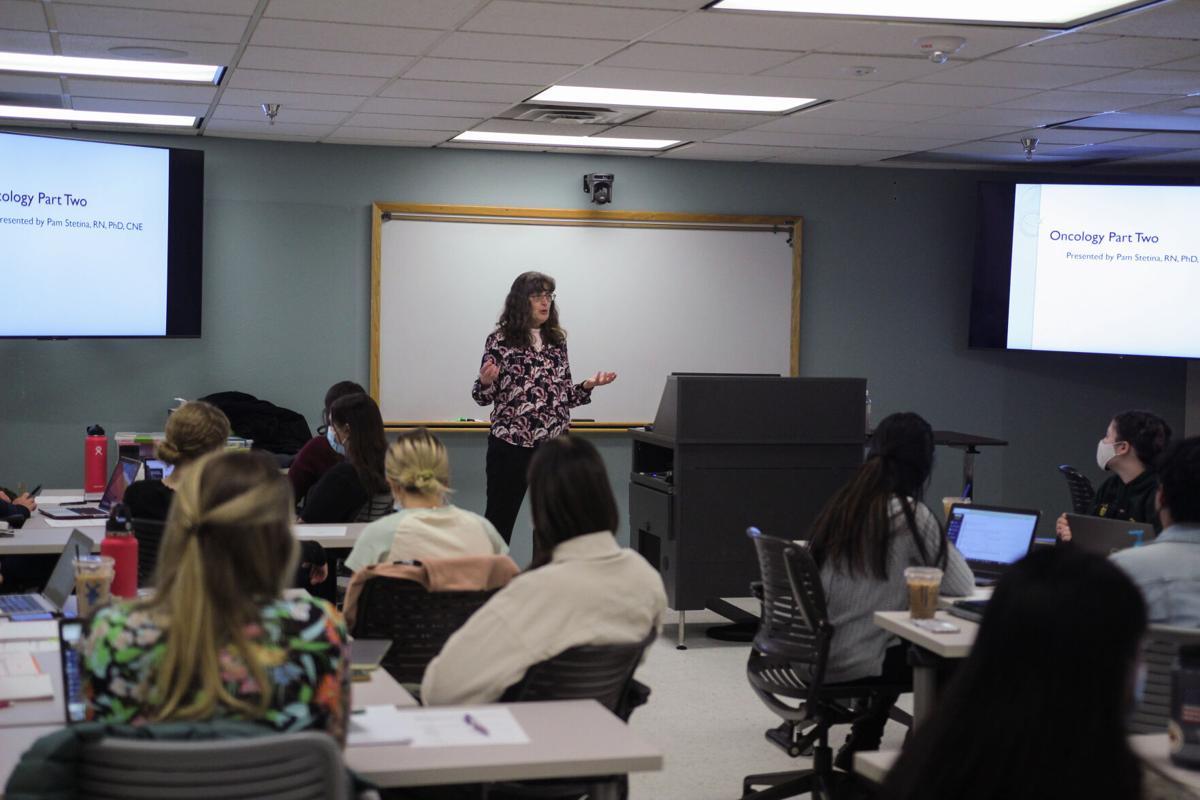 Professor Pam Stetina asking a question about the treatment process during her guest lecture, Nov. 16. 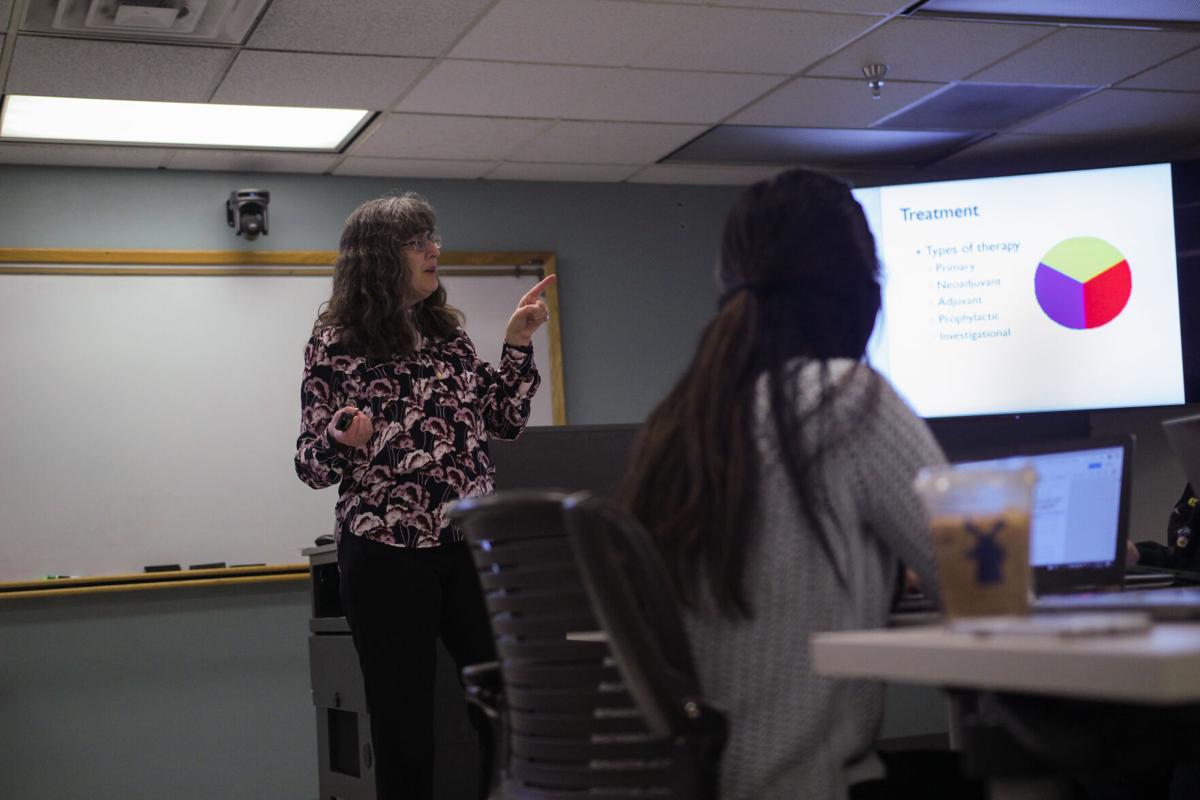 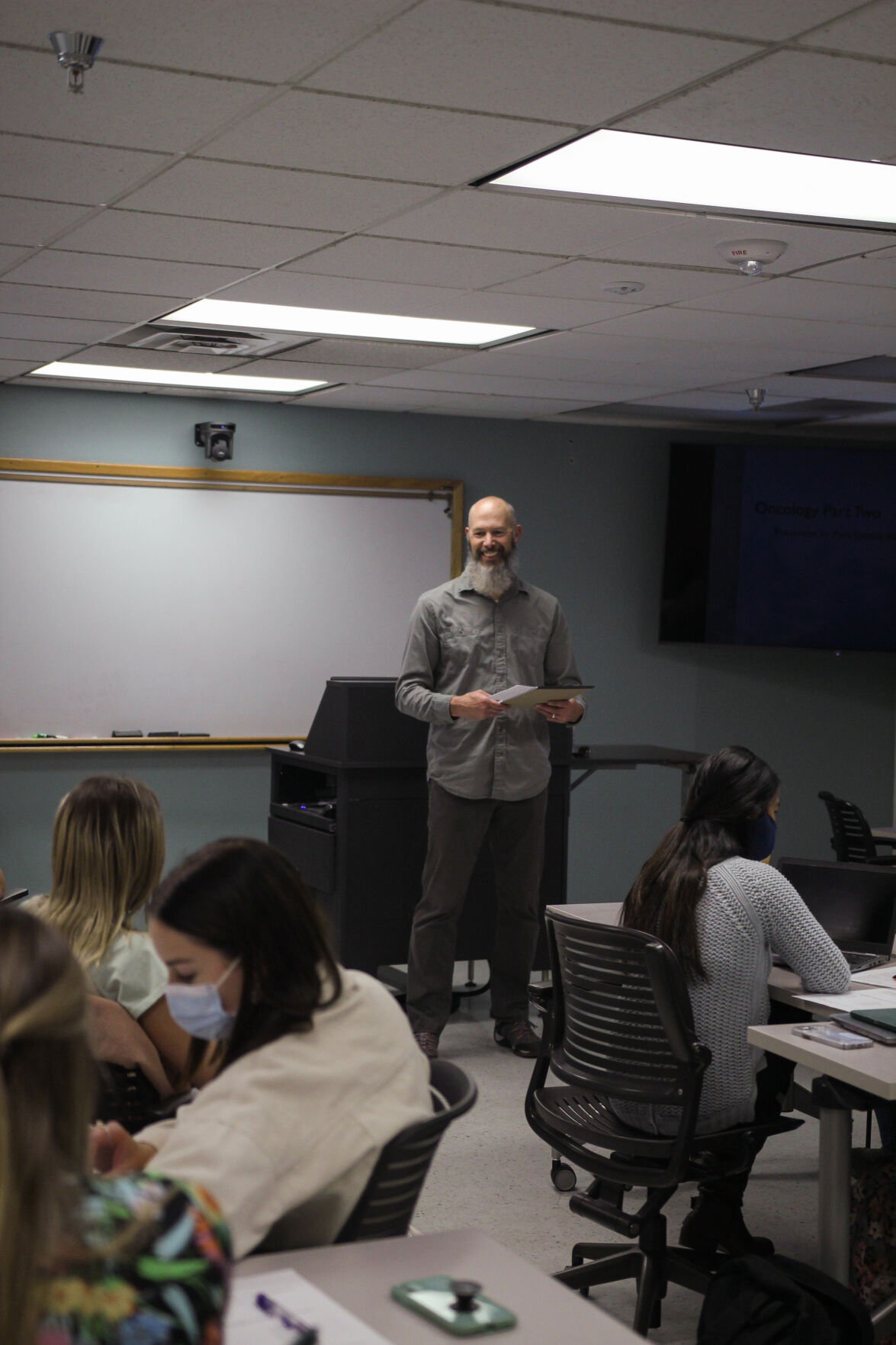 Professor Pam Stetina asking a question about the treatment process during her guest lecture, Nov. 16.

A professor can motivate a student, as well as teach them lessons they will always remember — it could be as simple as professors teaching meaningful lessons or having a massive influence on students’ personal lives.

Kaitlyn Schroeder is an NAU graduate with a degree in creative media and film. Her supervisor for NAZ Today, Todd Birch came to mind when she thought about professors that inspired her. Birch was her mentor and professor for the four years she was at NAU.

Todd Birch is an instructor for the  journalism department in the School of Communication. He is also the lab manager of the Media Innovation Center (MIC) and has been teaching for six years at NAU. He teaches NAZ Today production and television studio production.

When Schroeder was a freshman, she knew she wanted to be in the broadcast media field but didn’t know what route to take or how to get into it. She said she took a class with NAZ Today and felt it helped.

When Schroeder went to her first NAZ Today meeting, she said Birch was incredibly welcoming and it seemed like a prelude for how he would impact her life for the next four years. She explained that in the class, she started in little roles, but Birch was impressed with her dedication and helped her train for the director position.

Schroeder said she felt as if he was a great balance of a friend and professor. This relationship isn’t easily established by anyone, she said.

After Schroeder graduated, she began working for ABC15 Arizona. She is training with them to hopefully be promoted to director one day. Schroeder said the confidence Birch instilled in her plays a great role in her everyday life at her job.

Others have been inspired by Birch while earning their degree. Trinidad Jimenez graduated from NAU last November. In September of this year, he landed a job in production utility for the Arizona Cardinals. He feels Birch had the largest impact on him. He discovered his interest in television early on and found Birch was incredibly supportive.

“He was a caring professor, he was always encouraging us to learn new techniques whenever we wanted to, he was very open to letting people try new things,” Jimenez said. “He was very fun in NAZ Today, he’s a real sport. He would teach by example, and was always happy to explain everything I was curious about.”

Birch said he finds his teaching style to be hands-on, since he believes students learn best from actually doing work themselves.

“If [graduates] come away with inspiration to follow their passions, no matter if it directly relates to what I have taught them, I am glad to have played even a small part in that,” Birch said, “I often tell my students to be open to possibilities, that a willingness to learn new skills and not get focused on a linear career path can lead to exciting opportunities.”

Samantha Victor graduated NAU with a degree in visual communications and a minor in photography. NAU visual communications lecturer Tim Schwartz made the largest impact on her out of all her professors, she said. Schwartz shared a lot about his own career as a designer, Victor explained, which directly improved his students’ skills.

“The end of my last semester is when quarantine started, and Tim even took initiative to teach us how to become freelancers since there would be more people working from home,” Victor said. “He definitely made my college experience more enjoyable because it was obvious that he was passionate about being a designer and a professor. He always had a good attitude and always had helpful feedback during critiques.”

Victor was passionate about many different creative aspects, and she said Schwartz made her feel as if she could realistically do all of them if she really wanted to. Victor said he would often explain to the class how he has worked in various different design fields and mention how it is OK to not stay in the same field the whole year.

Schwartz recently left NAU this summer after teaching within the visual communication department for four years. He said he tried to create a place where students were free to explore both creatively and intellectually. One of Victor’s personal takeaways, she said, was his lesson about them being designers and not limited to only graphic design.

“It does feel good to know that I have had an impact on students and just to quickly reverse it, students have made long-lasting impacts on me and inspire me as well,”  Schwartz said.  “It is a two-way street.”

Schwartz said he feels as if he has learned as much from students as they have from him, and he is impressed with their creativity and willingness to push concepts and their energy. His wish for students, he explained, is to thrive as designers and, even more importantly, as humans.

Other students have taken what they have learned from mentors and applied it to their own businesses. Walker Mooneyham graduated from NAU in 2019 and currently owns a plant nursery called Moon Walker Gardens. He was most inspired by his biological sciences professor Stephen Shuster.

Shuster is the professor and curator of the Marine Invertebrate Museum in the department of biological sciences. He came to NAU in 1990 and has been teaching for 31 years.

Mooneyham said Shuster stood out because instead of just relaying information and knowledge to the class, he wanted to ignite a passion in his students for biology.

Shuster’s authenticity and positive demeanor showed he cared about teaching his students how amazing animals and nature can be, he said. Mooneyham said he was always enthusiastic and excited for Shuster’s class.

“I graduated a year later after taking his class and during the ceremony he approached me and congratulated me by name,” Mooneyham said. “Despite having numerous students he makes the effort to know the names of all of them, which most professors don’t take the time to do. This showed me how much he cared about his role in teaching and inspiring the next generation of adults.”

Hearing he has inspired a student like Mooneyham is wonderful and the finest of all rewards, Shuster said.

“All of us who teach live with the sense that we have failed to inspire anyone,” Shuster said. “We ask for questions and hear silence. We try to stimulate discussions and are met with statements that reveal how unprepared students are for class. But also, we all know the feeling we get when a light goes on in a student’s eyes. We all know the look of excitement students get when they put the nuances together and begin creative thought. When you do see it, you know these students are on their way.”

Shuster has been teaching for 44 years and said the students are the reason he’s been doing it. He knows that he has had a part in changing how students see the world and there is nothing like it.

Professors have the capability to inspire students so much that it has a long-lasting effect on them. Similarly, professors can be inspired by hard-working students with passion, drive and ambition. Having a deeper relationship than simply just teaching the content is believing in students, having faith in them and being a good mentor. Making an effort in classes while being a student can be challenging, but giving it your all can go a long way.