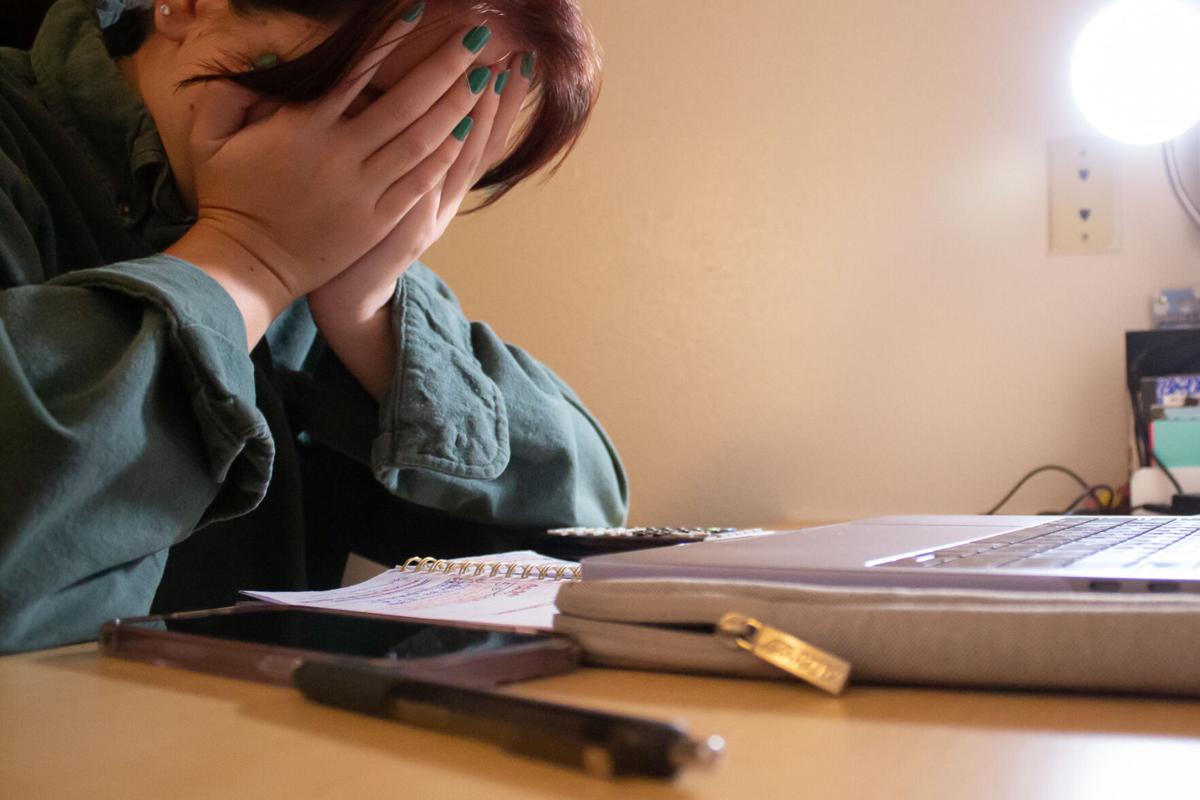 After a year of online school, college students feel an undeniable increase in stress when it comes to the school year ahead. NAU students are finding new ways to deal with their workloads while avoiding burnout, Sept. 5. 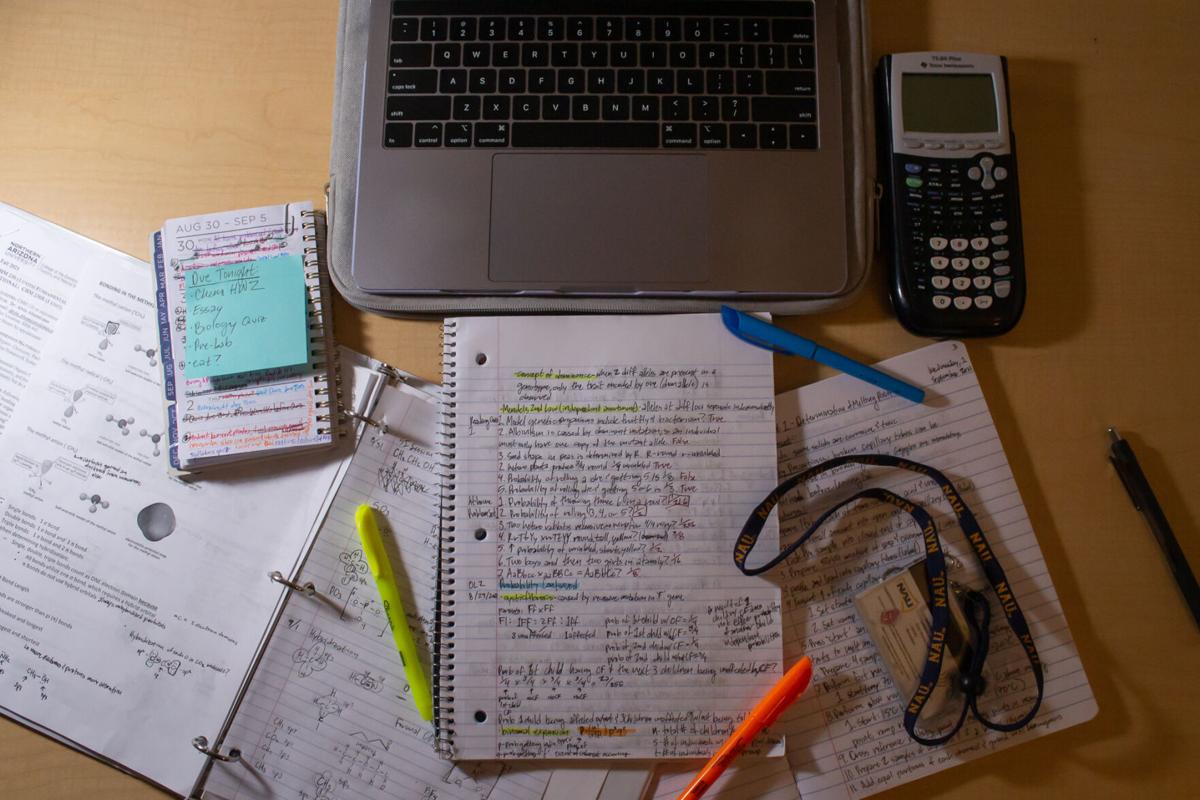 Students feel the weight of a year online as they find new ways to adjust to the full force of in-person classes, Sept. 5.

After a year of online school, college students feel an undeniable increase in stress when it comes to the school year ahead. NAU students are finding new ways to deal with their workloads while avoiding burnout, Sept. 5.

Students feel the weight of a year online as they find new ways to adjust to the full force of in-person classes, Sept. 5.

In a year like no other, students were faced with a daunting task: adjusting to college life amid COVID-19. Last year, some Lumberjacks found themselves in limbo between waking up, turning on Zoom and falling back asleep. This is the warped academia they experienced in the 2020-21 school year. However, they must now return to the so-called normalities of prepandemic routines.

A study published by The National Student Clearinghouse Research Center (NSCRC) found overall enrollment in higher education fell to 16.9 million during the spring 2021 semester, as opposed to 17.5 million from the year before. This 3.5% drop was seven times worse than the decline seen in the spring 2020 semester. The study also stated undergraduate students accounted for the entire decrease in enrollment — a 4.9% drop since the previous year — whereas graduate enrollment increased by 4.6%.

As for undergraduate students who rode out the storm, burnout from the stress of online classes began to loom as the year progressed. Sophomore Wyatt Rose attributed his feelings of exhaustion and stress to the lack of retention and accountability from online lectures.

“I would just have my TV above my computer and be playing Xbox while I was in my Zoom classes,” Rose said. “It gives you more incentive to try to find loopholes, and I definitely studied less. I just kind of winged it in terms of the Zoom classes, because it’s not like [instructors] can discipline you for it.”

Rose explained he struggled with ADHD in online classes and compared Zoom lectures to background noise in a dorm room. With the shift to in-person classes, he said he was able to retain the information in a more productive way.

“In-person classes really are improving my learning abilities because I don’t personally think you can adequately learn the material and retain it when it’s online,” Rose said. “Even though we have to wear masks, it’s still better than nothing. I’ve dreamed of going to college my whole life and having a college experience. It’s been the first two weeks and I’ve already had that. I’m just excited for  what’s to come. I’m trying to live in the moment, something I didn’t do enough of last year.”

Although students like Rose experienced burnout over the course of online classes, a common trend among Lumberjacks is returning to campus sparked a new flame of academic and social motivation.

After coming to NAU in fall 2020 from Maui, Hawaii, sophomore Malia Paulino not only faced the struggles of online classes, but also the pressures of being a first-generation college student. Paulino explained she found it difficult to stay motivated for her biomedical sciences major in the academic setting of last year, which was a factor in her decision to change to a double major in political science and criminology. Despite the disheartening college experience of last year, Paulino said she is optimistic about her new career path and college life moving forward, especially as the university looks toward a sense of normalcy.

“Things have to get worse before they get better,” Paulino said. “I mean, I’ve been through a lot of stuff that does show, but I feel like a lot of people can say the same. But when I am sad, I just remember tomorrow’s a new day, and I can only go up from here. That’s all I can do, and that’s really what motivates me.”

For what seemed like an ironclad dam in the flowing river of college life, some students are finding themselves in a new struggle — even though the floodgates are beginning to open.

Junior Isabel Duran said she found it easy to pile on to her schedule because of a false sense of routine from the previous year. This experience led her to be more stressed, she added.

“I overload myself a lot,” Duran said. “I’m taking 19 credits, which is the max that you can take, and I also work, so it’s definitely a balance and a struggle at times, which can lead me to get depressed. Having friends is a great thing though, because they’re all going through what you are going through. So it’s not like you’re struggling by yourself, you’re struggling with other people who also have other ways to deal with it.”

Duran explained that even though stress levels may be high among students recovering from Zoom burnout, there are always resources to turn to for support, and she insisted mental health always comes first. A prominent outlet in her life has been Delta Sigma Pi, a co-ed business fraternity Duran said she has called home for the past couple years.

“That’s how I made a lot of my friends,” Duran said. “They do study sessions for the fraternity because a lot of us are the same majors, so we all get together and study for the same classes that we have. It’s hard to make friends of course, but putting yourself out there and having your mental health be your first priority is always a good thing.”

For many, mental health is an everyday struggle in college life. However, as restrictions begin to loosen and students feel motivated to pursue the lives they wish to lead, it is important to become aware of bad habits acquired in the past year — especially to prevent these feelings of burnout from recurring.