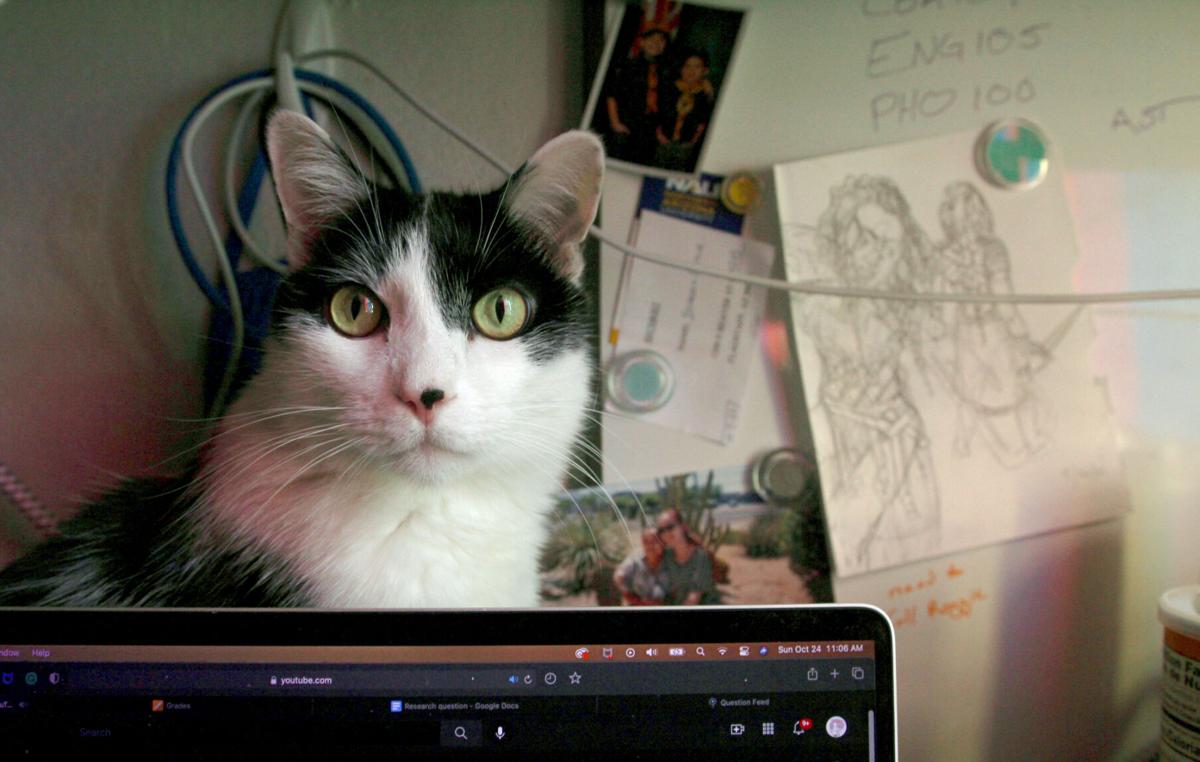 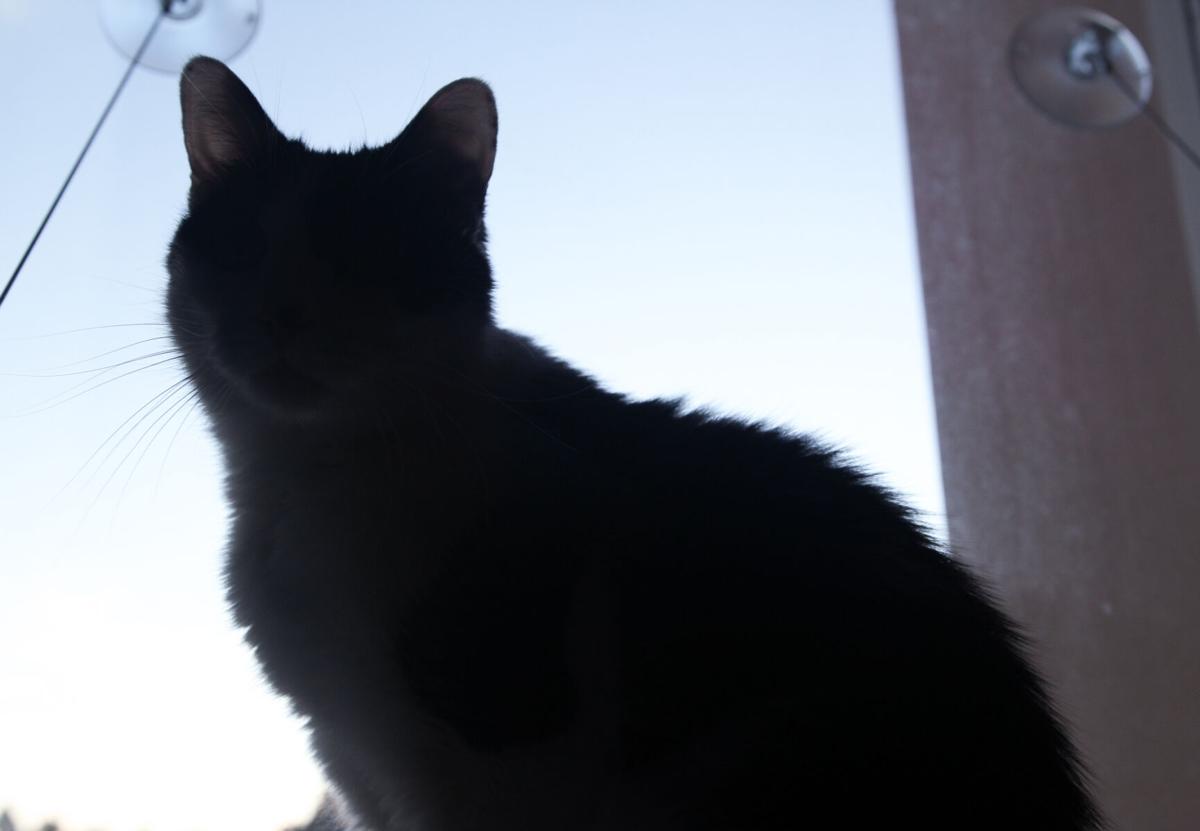 Oreo's silhouette shown behind a window in a Sechrist Hall dorm, Oct. 24.

Oreo's silhouette shown behind a window in a Sechrist Hall dorm, Oct. 24.

When it comes to dealing with internal conflict, people often think to confide in friends, family and others they know, but pets are usually overlooked. Emotional-support animals (ESAs)  are also a good form of maintaining a healthy state of mind. People value their pets as they provide comfort, whether registered service animals or personal heroes.

According to a study in the Journal of Evidence-Informed Social Work, patients diagnosed with post-traumatic stress disorder (PTSD) had an 82% reduction in symptoms when supported by an animal.

Junior Jake Dyer has spent almost nine years growing up with his family dog, Pepper. In the moments without his dog, Dyer said he consistently misses her and her comforting presence.

When he comes home, Dyer said Pepper lifts his mood by greeting him. The familiarity and comfortability, along with the ability to cuddle and play with her, also contributes to his well-being. Dyer explained this dynamic adds to his life in ways separate from human relationships.

Studies by Alvarado Parkway Institute (API) show that when petting an animal, people tend to feel more relaxed and have reduced levels of anxiety. An individual can benefit from this experience by meeting an animal once, so having a permanent companion can help mental health even more.

“There’s something so unique to the human-dog relationship that we have,” Dyer said. “I think that’s very important to have, [and] I feel like those who are growing up without a dog are really missing out on something special.”

Research by API examined why pets have such a drastic effect on humans, even though they are not a source of verbal conversation. According to the institute, pets still offer psychological companionship and physical affection.

Dyer said when he is having a bad day, his dog makes everything better. She is not going to judge anything, but instead, is simply there in times of need.

“With being at college [and] with my dog being at home, I miss her every day,” Dyer said. “I pull up pictures of her just to look at her. She came up for [Family Weekend,] and it was really great and really refreshing just to see her again. Whenever she’s not here, I am always thinking about her. It makes a difference, as when I am having a bad day here, I don’t have my dog to accompany me.”

Flagstaff resident Jessica Alicea’s dog, a miniature German shepherd mix named Gracie, is not a registered service animal. However, Alicea said her dog has massively impacted her life and provided emotional support. Gracie helped Alicea through events and traumas, of which she described herself as forever grateful for.

When Alicea underwent surgery, she detailed Gracie as having a significant effect on her mental well-being. Alicea said her dog helped when she was sick with stage III cervical cancer by staying at her bedside, along with assisting her through depression, anxiety and domestic violence.

“She lays beside me when I cry, she puts her head on me or even nudges my hand, letting me know things are going to be alright,” Alicea said. “She’s very affectionate and has her own way of letting me know she’s here for me.”

Maria Holmes is the co-owner of American Support Animals, which provides assessments and documentation for individuals depending on medical and mental health histories. According to the organization’s website, those prescribed with ESAs have legal rights and protections, specifically involving housing. For instance, the Fair Housing Act shields people with diagnosed conditions from facing discrimination during the rental process, including those with ESAs. As prohibited by federal law, landlords cannot charge tenants with pet fees, nor deposits, for having these animals.

As a registered nurse, Holmes started the business with her husband, who holds the same position. The business provides free consultations for all, along with complimentary assessments and certification letters for Disabled American Veterans.

“We just want to give back to the community, [and] we provide a free assessment for people to help them out,” Holmes said.

United States Service Animals is an organization that helps people with animal registration. According to the partial list of conditions covered, pets may help with anxiety, depression, stress, PTSD and panic attacks, as well as other emotional and psychological diagnoses.

NAU alumna Britt Johnson considers her dog, Bruno, to be her best friend — although she has only had him for just over one year. Johnson explained he gives her a sense of purpose that cannot be fulfilled in other aspects.

“It’s really nice to have company, as I get anxious when I’m alone,” Johnson said. “I feel like he can sense when I’m depressed and will lay on top of me to help me feel calmer. During panic attacks, he will lay next to me until it’s over.”

Having a pet can impact one’s life in a variety of ways, big and small, whether going on walks and getting some fresh air or providing companionship. The reduction of stress and anxiety pets can contribute surely means they deserve a treat every once in a while.