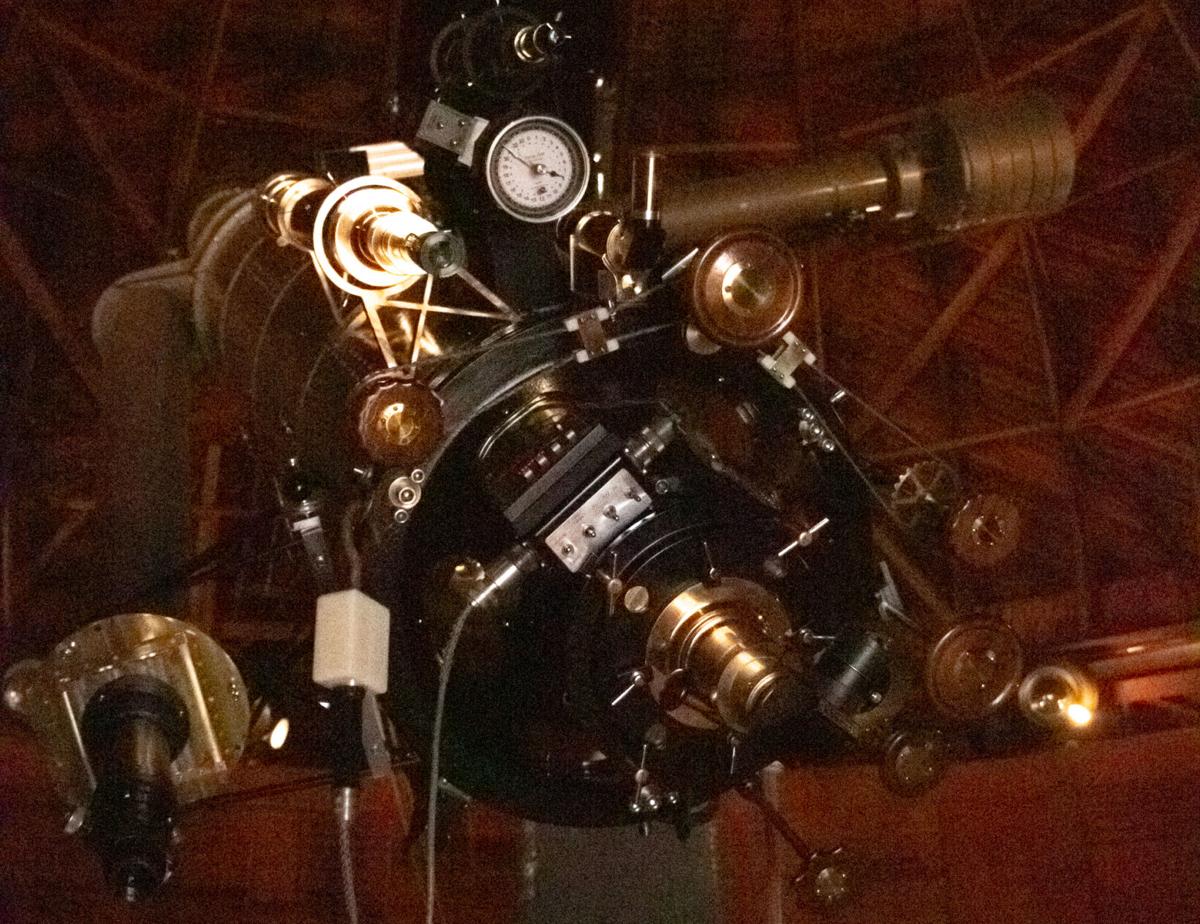 At nearly 32 feet long, the 24 inch Clark Refractor Telescope is the largest and oldest at the observatory, constructed in 1896, Oct. 13. 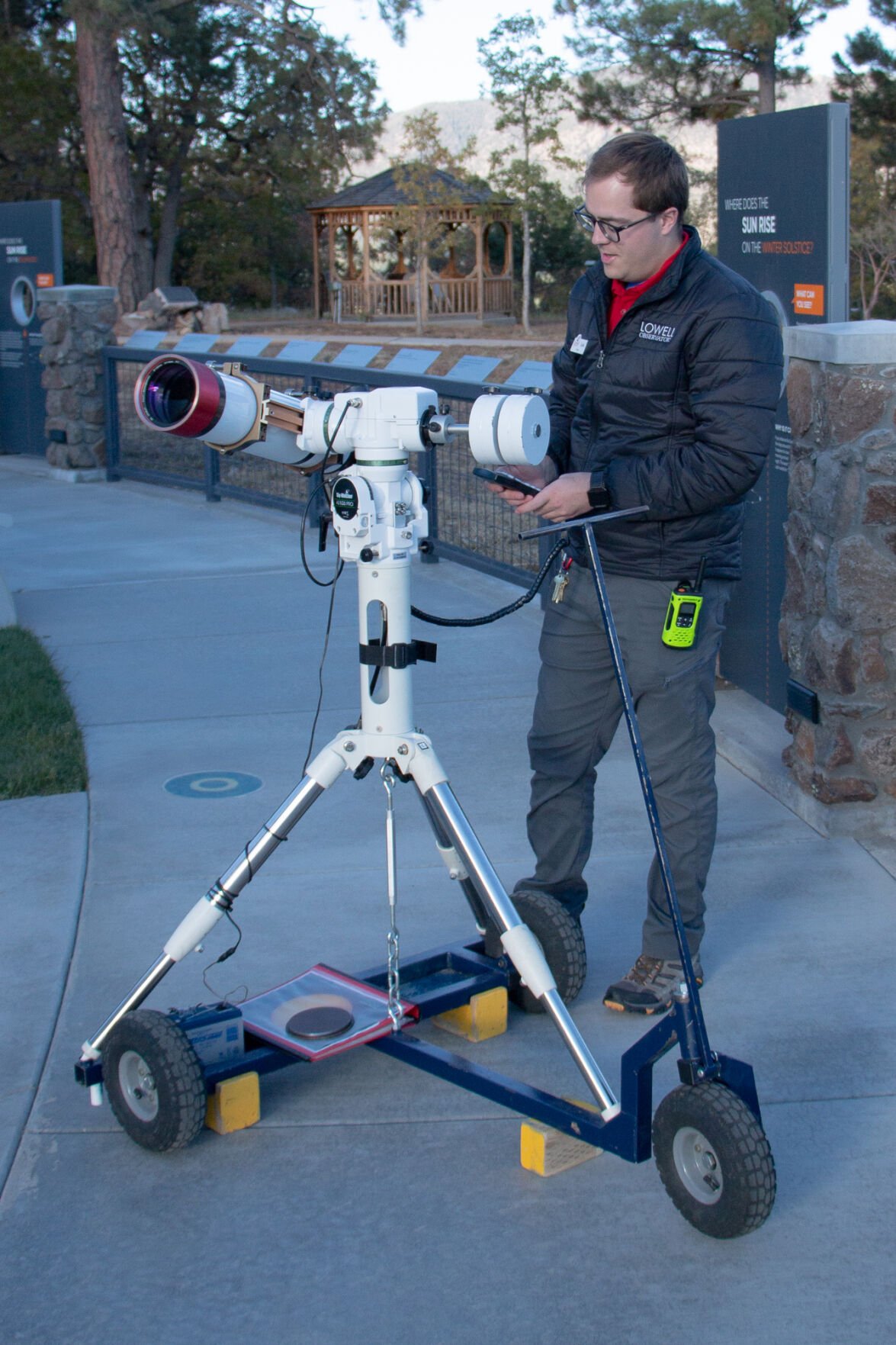 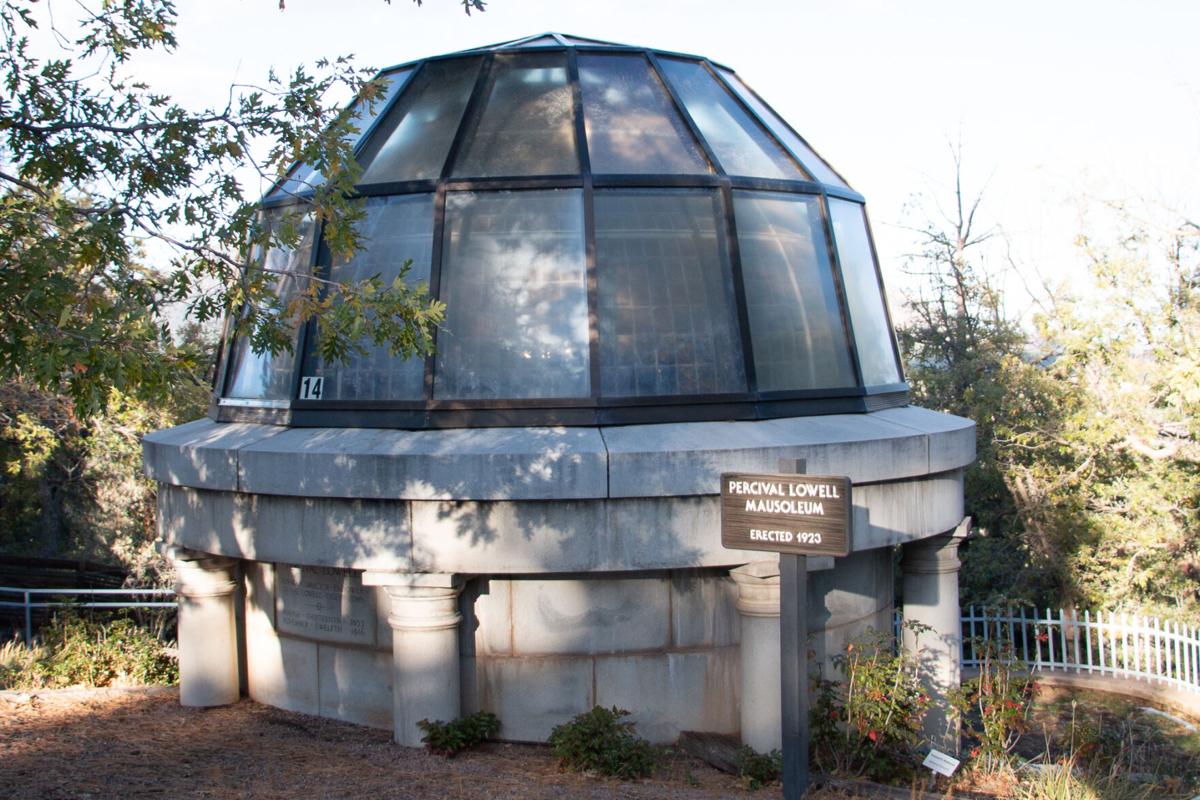 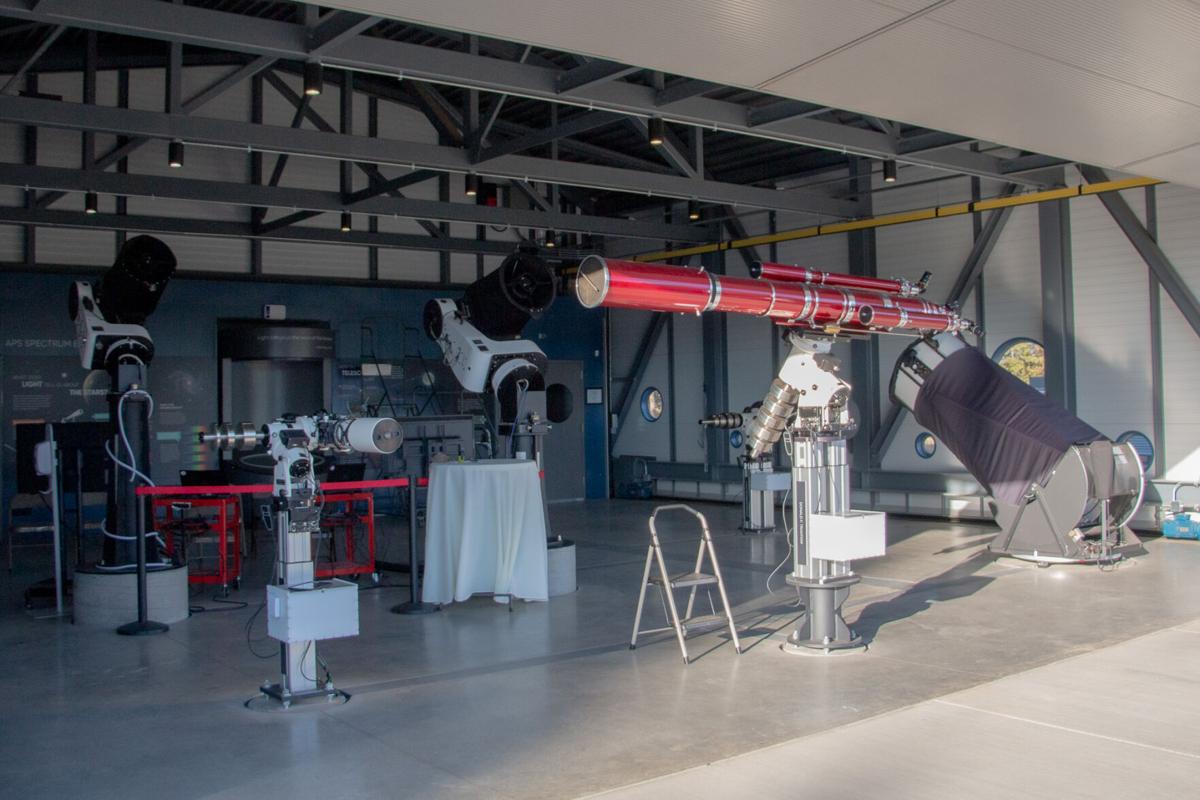 The newest addition to Lowell Observatory isn't just one telescope but six telescopes on the Giovale Open Deck Observatory, Oct. 13. 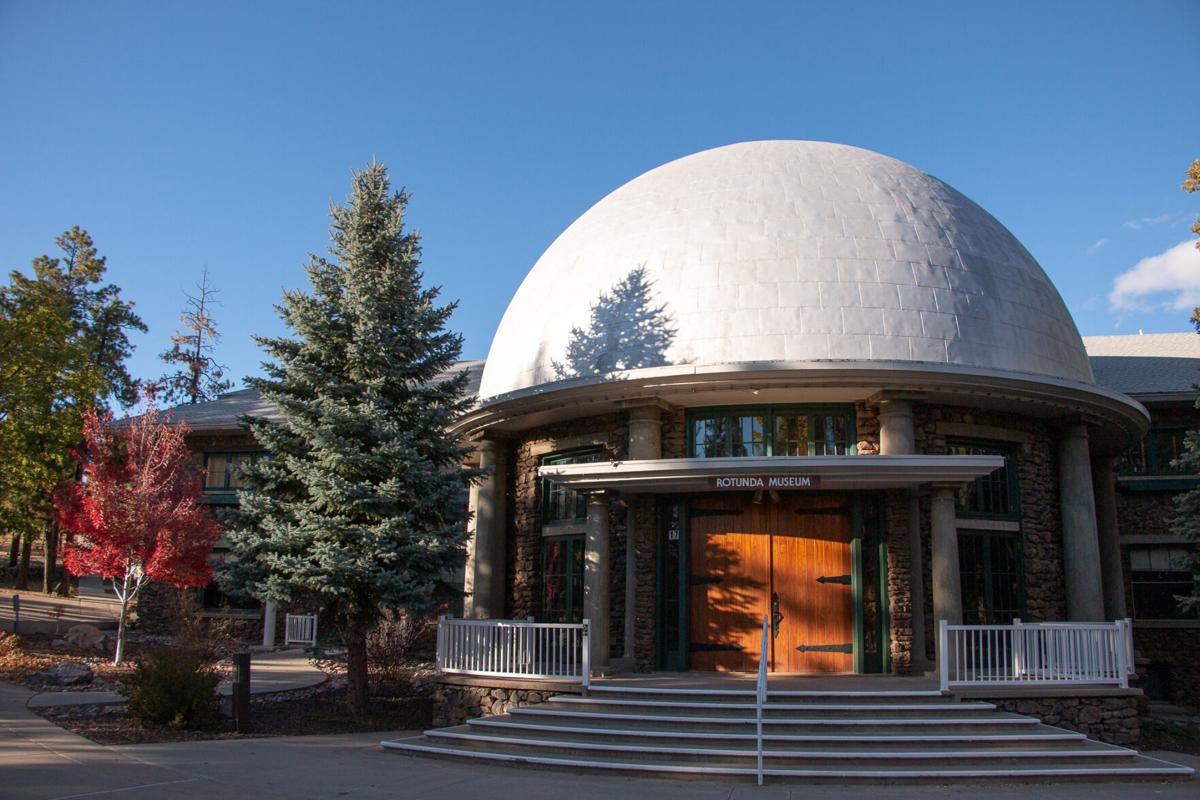 The Rotunda Museum at Lowell greets visitors as they first enter the observatory grounds and houses a variety of exhibits including retired telescopes and equipment, Oct. 13.

At nearly 32 feet long, the 24 inch Clark Refractor Telescope is the largest and oldest at the observatory, constructed in 1896, Oct. 13.

The newest addition to Lowell Observatory isn't just one telescope but six telescopes on the Giovale Open Deck Observatory, Oct. 13.

The Rotunda Museum at Lowell greets visitors as they first enter the observatory grounds and houses a variety of exhibits including retired telescopes and equipment, Oct. 13.

Lowell Observatory aims to pursue the study of astronomy, including the solar system and how it has evolved over time. In order to understand the nature, formation, habitability and evolution of planetary bodies in our solar system, astronomers organize an array of research programs. The observatory is reopening to the public after pandemic inflicted closures, but scientists have still been hard at work.

According to Lowell Observatory’s website, its goal is to share space with the public, which led to the missions of research and education. In an online statement, Director Jeff Hall also explained the importance of communicating science.

William Lowell Putnam IV is the fifth sole trustee for Lowell, and he serves as one of seven members on the Board of Trustees of the Lowell Observatory Foundation. This role means continuing the trust if someone is unable to manage the position, or dies.

“[Lowell Observatory] has now been a part of Flagstaff for 127 years, and it’s a part of my family tradition to be involved,” Putnam said.

Kevin Schindler has worked at the observatory for 26 years, and said he always had a keen interest in science. He started as a tour guide before building his way to a historian and primary media contact.

The Astrophysical Materials Lab aims to do observatory research, document the history of the observatory and presentations. Schindler said he regularly distributes press releases, in addition to writing several books — one of which is about the connection between Pluto and Northern Arizona. In general, most of his publications surround big discoveries. He has work like “Lowell Observatory,” along with collaborative pieces written with several other people.

Christian Law founded the observatory in 1984, and he wanted to study Mars while pursuing his interest in other planets, Schindler said. In 1905, Law started searching for a ninth planet known as “planet x,” and up until 1916, he was planning and looking. In the 1920s, it was evident his leadership had been onto something — the discovery for Pluto happened in 1930. Since then, Pluto’s atmosphere has been studied by co-scientists, and many photographs were taken surrounding this research.

Some individuals may find it intimidating to visit the observatory, especially if they lack a scientific background. However, Schindler explained everyone is welcome.

“From the beginning, [Lowell Observatory’s] founder said, ‘What is the point in doing science if we don’t do it with everyone?’” Schindler said. “We have a background, and obviously set up telescopes and programs so everyone doesn’t need special training. People come from all over the world from all different backgrounds, and it’s really spectacular to look through the telescope.”

Due to COVID-19, the observatory is not open as regularly as it used to be, Schindler said. For now, groups of 15 or less are allowed. Once pandemic restrictions are completely lifted, Schindler mentioned, anyone will be able to come in. He said outdoor programs are also being offered to help with the situation.

Astronomer Jennifer Hanley has worked with the Astrophysical Materials Laboratory at NAU for six years. She is a part of a program called the Project for Exploration Science Pathfinder Research for Enhancing Solar System Observations, or ESPRESSO, which is known as a virtual institution involving solar system exploration. She said her work includes seeing what changes occur within the solar system, such as different states, salts and pressures.

Hanley mentioned lab workers' are doing research into the outer solar systems such as Pluto and Titan. They also make observations on the lakes of Titan and look at where the liquid freezes, the circulation pattern, and how long it will be there. The aim is to understand the chemistry of lakes and seas of Titan.

Hanley said astronomers at Lowell occasionally conduct research for NASA, which has to go through the peer-review process.

In order to attract more astronomers, researchers and staff, Lowell has several programs which include research at the astrophysical materials lab for students. Undergraduates can benefit from research experience, while PhD students are able to study Titan, Pluto and other astronomical concepts.

“Our research involves Titan and the lakes and seas within the area,” Hanley said. “It’s interesting to compare it with Earth, as a large number of analogies can be made with different salt, water temperature, use of carbon dioxide, circulation pattern and the overturn when seasons change.”

Lowell Astronomer Gerard Van Belle specializes in interferometers, which are tools used to study objects and phenomena in scientific fields. He said he has worked on every major optical interferometer on the planet including, but not limited to, the Infrared-Optical Telescope Array. According to the observatory’s website, he won the first director’s research award at the Jet Propulsion Laboratory following his pioneering stellar surface imaging work on the Palomar Testbed Interferometer.

Van Belle said his field involves taking multiple telescopes, linking them together and synthesizing a single telescope. He said his aim with Lowell is to aid in building and designing telescopes with new capabilities.

“A discovery that has stuck with me is how we have to pretend that telescopes are much bigger than they actually are, if you look at a star it is a big thing, but far away with a regular star,” Van Belle said. “It appears to just be a point of light, and all you see is a dot — what we’ve built is something that you can see as a large ball over a dot. You can imagine it to look like you're squeezing a beach ball, with it puffed out in your hands.” Van Belle said.

Additionally, the observatory has many different partnerships, including contacts in the federal government and navy partners in the industry. Redwire Space company specializes in using materials from space to help advance technology like telescopes as well as providing products critical to space exploration.

Flagstaff’s Lowell Observatory is open to anyone who has an interest in astronomy. Van Belle said the facility has a strong presence in the public, with visitors coming during the day and night alike. They are even able to look through telescopes and see the rings of Saturn, Van Belle added.

Lowell laboratory has different programs suited for all people, even as it reopens after the pandemic with science in mind.

If one is interested in learning more about the planets, stars or other aspects of astronomy — or simply wants to see an extraordinary view — Lowell Observatory is the place to go