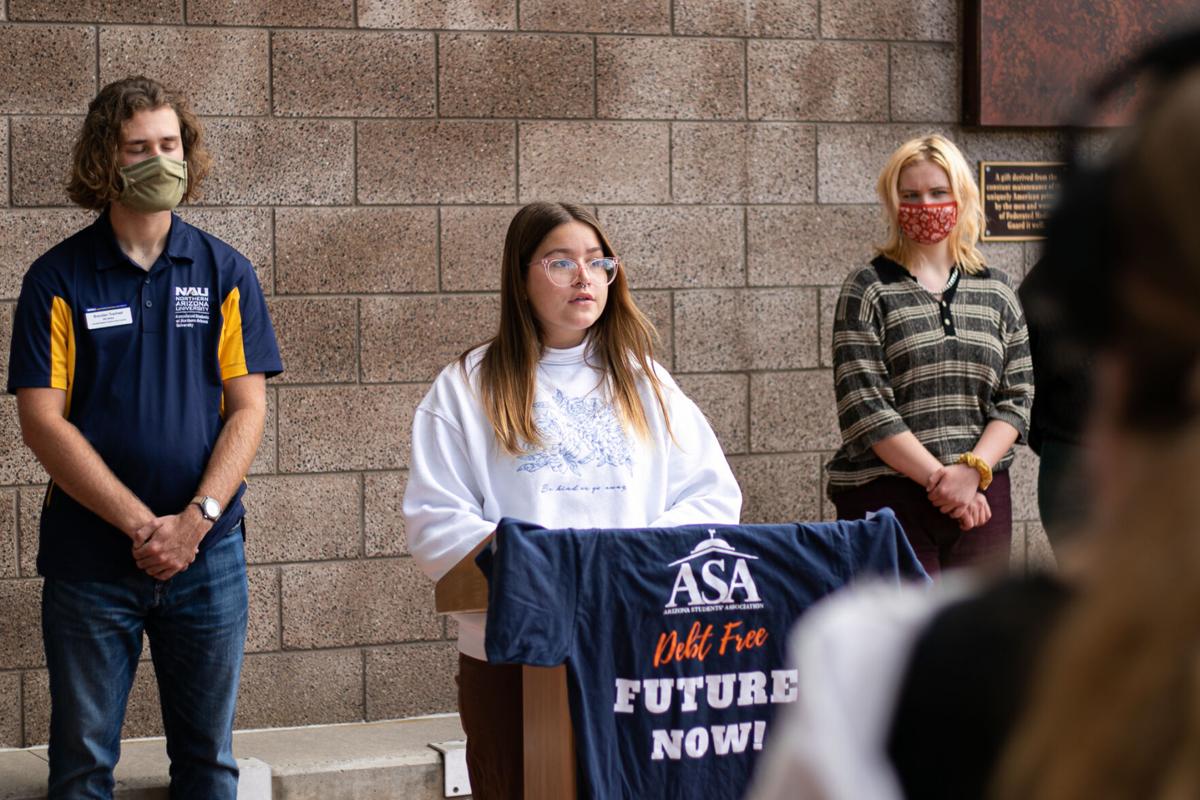 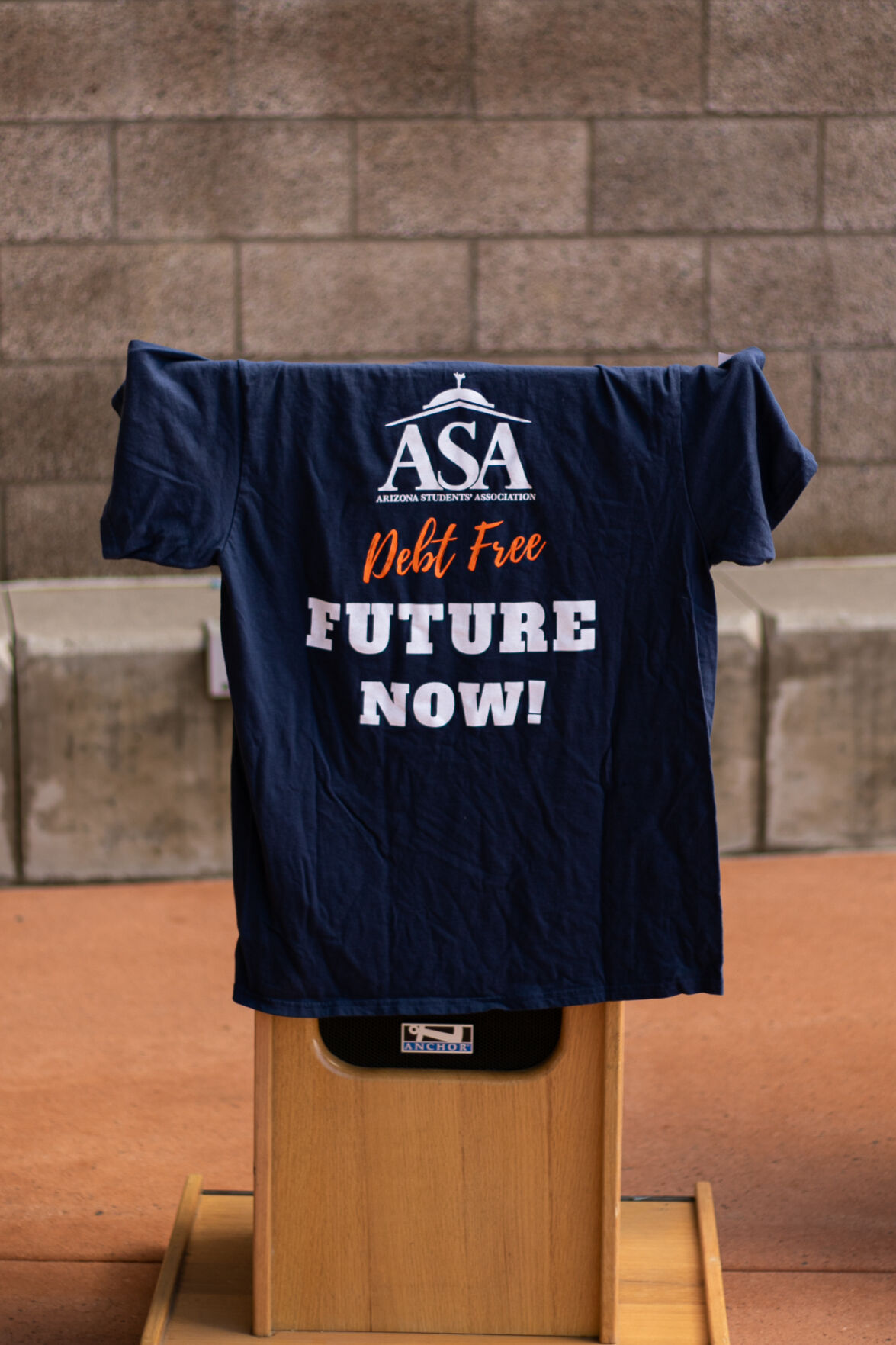 The As Nearly Free As Possible Act will cap tuition and fees while investing in higher education at First Amendment Plaza, Oct. 5. 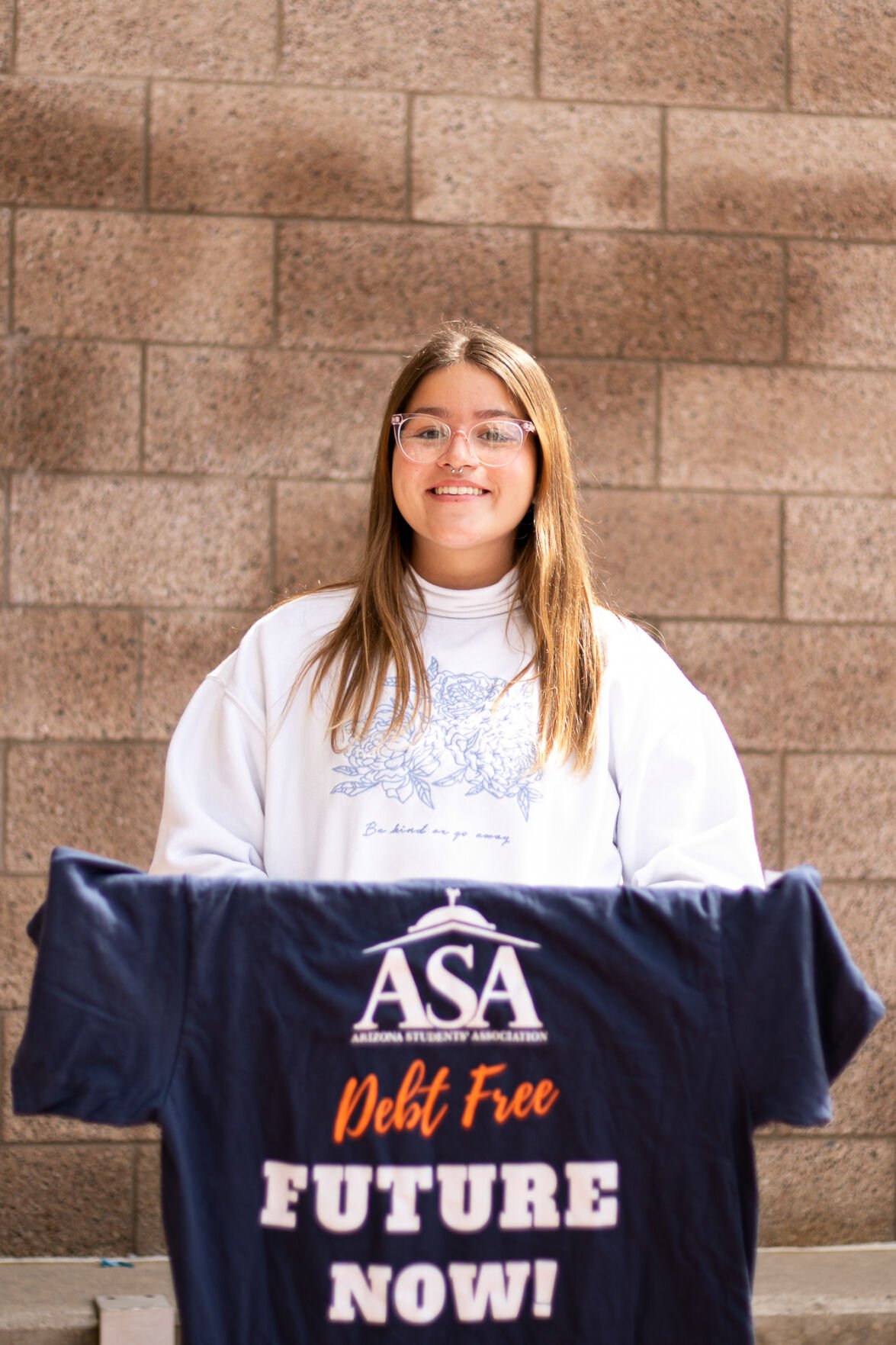 The As Nearly Free As Possible Act will cap tuition and fees while investing in higher education at First Amendment Plaza, Oct. 5.

The student-led Arizona Students’ Association (ASA) has launched a statewide ballot initiative, called the “As Nearly Free As Possible Act.” If included on the ballot and approved by voters in 2022, it will ensure funding for higher education in the state, while limiting tuition and fee increases.

ASA’s website described the ballot initiative as something that will cap tuition and fees, in addition to investing in higher education, making Arizona’s three public universities more accessible and affordable for all residents. If passed, the measure will require the Arizona State Legislature to fund at least 50% of tuition and fees for undergraduate students from Arizona.

However, if the state fails to allocate the funds, a 2% surcharge will be added to the state’s corporate income tax. Along with investing in higher education, it would guarantee tuition and fee rates for the four years a student attends college, and further limit tuition and fee increases from the Arizona Board of Regents (ABOR) or universities themselves, mandating that any increase is limited to the prior year’s cost-of-living increase.

ASA organizing director Kyle Nitschke said the act is designed to hold the state government accountable to Arizona’s Constitution, which states higher education “shall be as nearly free as possible.”

Nitschke explained the ASA decided to launch the ballot initiative for the upcoming 2022 midterm elections because per student funding for Arizona’s public colleges and universities is 55% below 2008 levels. During that time, the average price of in-state tuition increased by $5,384 for public four-year universities, while there was a $3,669 cut in per-student funding and tuition, according to data provided by ASA’s website.

During this time, the rate of spending for prisons has outpaced that of education in Arizona. According to a Department of Education report from 2016, the rate of spending for state and local prisons jumped by 303% compared to public schools. The state has continued the trend of increasing funding for prisons by allocating $1.3 billion to the Arizona Department of Corrections, Rehabilitation and Reentry for the next fiscal year, as reported by The Arizona Republic.

As funding for state prisons has grown, so has the cost of attending Arizona’s three public universities, according to figures from ABOR. During the 2010-11 school year, base tuition and mandatory fees for in-state undergraduate students at ASU, NAU and UArizona ranged from $7,600 to $8,000. Over the course of a decade, costs at these schools reached $11,000 to $12,700, which represented 44.7% and 58.7% increases from the lowest to and highest figures, respectively.

Moreover, Nitschke said he is hopeful about the initiative passing, which would force the state legislature to allocate more money to higher education.

“This initiative will force the state to allocate more money to higher education,” Nitschke said. “I mean if the state has enough money to fund prisons, then they sure as hell have enough money to alleviate the burden of the high cost of tuition and fees that residents face when attending college.”

“The Arizona Constitution says that education should be ‘as nearly free as possible,’ but when you have for in-state residents a $11,000 tuition price tag with a $6,000-plus price tag for housing,” Carter said. “What this does is make getting into higher education a lot more daunting, especially for communities that are of lower income, [and for] majority minority communities, which historically do not have the resources to be able to afford massive loans or be able to apply for different scholarships.”

In addition, Carter expressed that the As Nearly Free As Possible Act will make it easier for students to get advanced degrees in engineering, law and medical sciences. If passed by voters, Carter said the state will be able to have more qualified entry-level employees joining the workforce to bolster the economy in the long run.

He also said if the state is able to eliminate the possibility of resident undergraduate students taking out loans to attend college, it will lead to more money being pumped into the economy.

“We see this ticket for higher education being negated by this outrageous price tag that only a certain few are able to take on — or you have to be OK with being $50,000 in debt when you graduate,” Carter said. “It’s not good for the economy when you have $200 to $300 being taken out of someone’s paycheck each month, just to pay for student loans.”

During an Oct. 5 press conference announcing the ballot initiative, councilmember Adam Shimoni said he is excited to see the proposal move forward.

Shimoni explained the current structure of paying for higher education will continue to discourage young adults from attending college, and in turn will affect the country’s competitiveness on a global level.

“A quality of education is so important to the future of all of us, of our societies, our ability to be resilient as communities and to be competitive at the global level,” Shimoni said. “If we want to create a resilient community, we must start with quality education that is affordable and attainable that doesn’t leave students in shackles.”

Nitschke said in order to have the initiative added to the ballot for the 2022 midterm elections, the ASA hopes to gather roughly 287,000 signatures. The ballot will be finalized by July 2022.