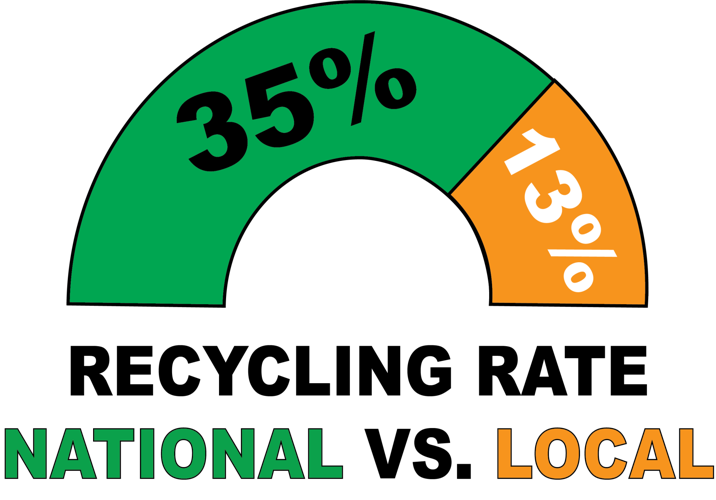 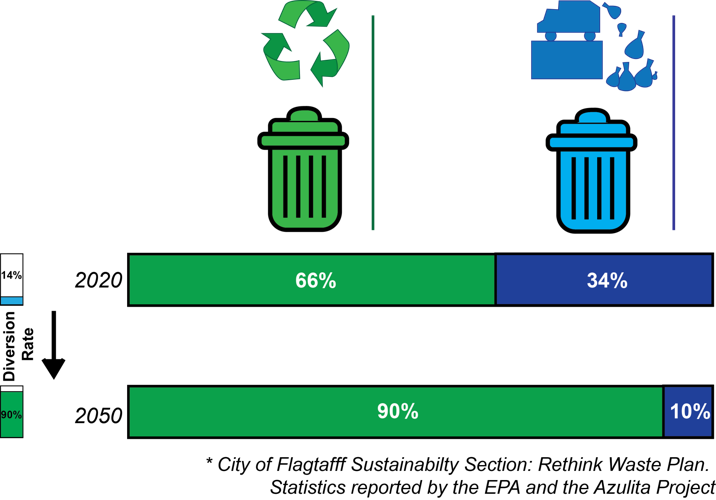 The City of Flagstaff and local nonprofits like the Azulita Project are considering a new approach to recycling that centers on community education and individual responsibility to reduce waste.

Only approximately 66% of items thrown into recycling bins in Flagstaff are actually recycled, and the remaining one-third is sent to the Cinder Lake Landfill, according to statistics released by the Azulita Project. Additionally, the local recycling rate of 13% falls well below the national rate of 35%, as reported by the Environmental Protection Agency (EPA). Rates have further declined since China’s 2018 decision to restrict the types of solid waste it is willing to accept.

In 2017, the City of Flagstaff’s sustainability section drafted and released the Rethink Waste Plan, which lays out a goal of 90% diversion by 2050. This means that ideally, only 10% of the total waste generated would reach the landfill, and the rest would be recycled or repurposed. The current community-wide diversion rate stated in the plan is 14%.

The method proposed by the sustainability section is to begin focusing on the entire life cycle of materials. For the past several decades, the main focus of waste management-based sustainability was on the end result of materials — landfilling, recycling and combustion. The Rethink Waste Plan suggests that the community must take a step back and consider a much broader approach.

This approach includes community outreach and education to inform people of methods for reducing waste production and for improving recycling habits. The plan also calls for further research into the details of Flagstaff residents’ recycling habits and waste patterns. In addition, the plan seeks to create a greenhouse gas inventory to better understand the environmental impact of different waste-related issues.

Flagstaff’s sustainability aide Dylan Lenzen said the city is in what should be the end of the first phase of the plan. He said there is some uncertainty due to an upcoming ending contract with Norton Environmental, Inc., which is currently contracted for materials recovery.

Alongside the end of the recycling contract, the market for plastic is considerably lower due to China’s decision in 2018 to halt its purchase of recycled plastic. This has greatly reduced the buyback value for recycling contractors nationwide and limited the types of plastic capable of being recycled.

Lenzen also said the city is considering a “pay-as-you-throw,” or volumetric pricing program. This would essentially create additional trash cart sizes and residents would receive a smaller trash bill if they chose a smaller trash cart. This model has seen successful results in other communities that have adopted it, such as Austin, Texas, Portland, Maine, and Seattle, according to an EPA archived document.

Based on the 2017 report from the EPA, plastics account for 13.2% of waste generated nationally and represent the third-largest waste category behind paper and paper board at 25%, and food at 15.2%. Unlike the top two categories, plastics do not biodegrade and are largely not recyclable. Plastics made up just 3% of recycled and composted material, according to the same EPA report released prior to plastic market reduction.

Plastics, therefore, present a troublesome hurdle for the goal of waste reduction. The city’s strategy depends on what is called an “upstream approach,” where a material is dealt with earlier in its life cycle. In other words, the material must be rejected at its source rather than dealt with post-consumption, which moves the burden onto consumers to seek out alternatives to the plastics used. This is one of the goals of the Azulita Project.

The local nonprofit works to reduce the use of plastics around the city. The members of the organization focus on the reduction of single-use plastic, which is the category of plastic that is designed for one-time use. Plastics in this category include grocery bags, disposable straws, food packaging and wrappers.

The Azulita Project works with local businesses to reduce the number of plastics they use. In addition, the nonprofit works with schools to educate children on the importance of waste reduction and hosts public events to raise community awareness. It has also released a pair of informative videos that can be viewed on its website.

This approach relegates recycling to a secondary, supportive role in reaching the goal of sustainability.

“Recycling plays an important role in the process,” Azulita programs manager Emily Melhorn said. “[Recycling’s] not effective enough on its own to solve the problem.”

Rather, Melhorn said she believes the individual plays a large role in the reduction of waste.

Melhorn’s advice for those who would like to reduce the amount of waste they produce is to start simple.

“Take a look at your regularly purchased items,” Melhorn said. “Make a note of which create the most waste and think about an alternative that produces less waste, or at the very least, comes in a recyclable container.”