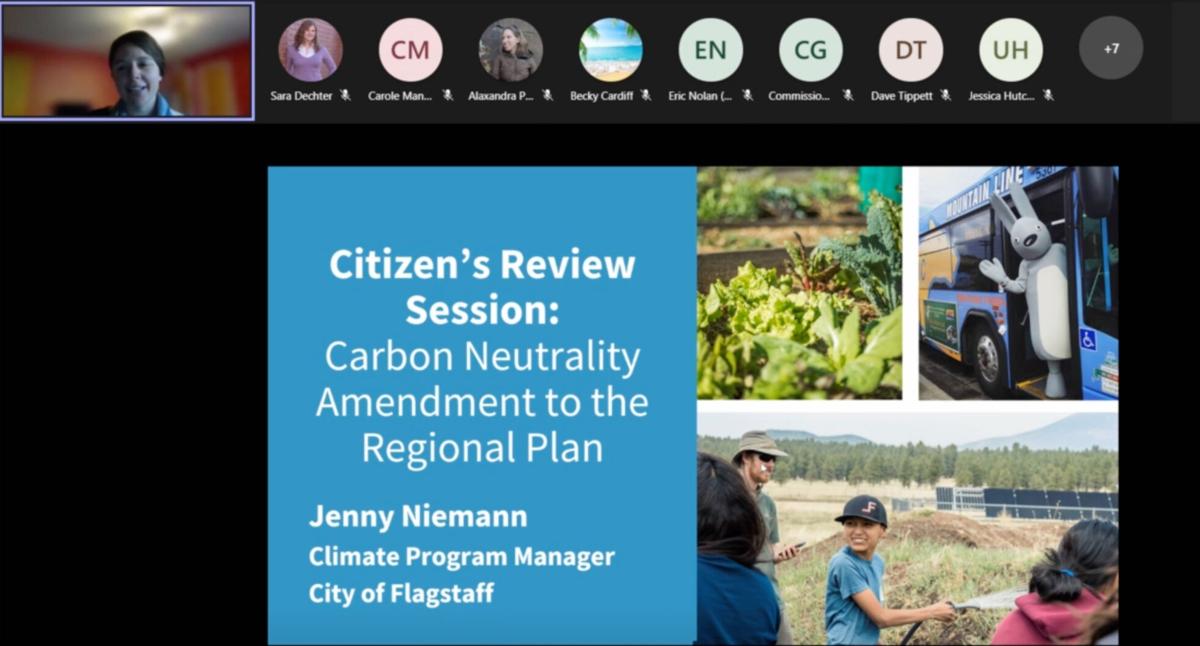 A screenshot from the biweekly Planing and Zoning Commission meeting, which featured a citizen's review session, Oct. 27. 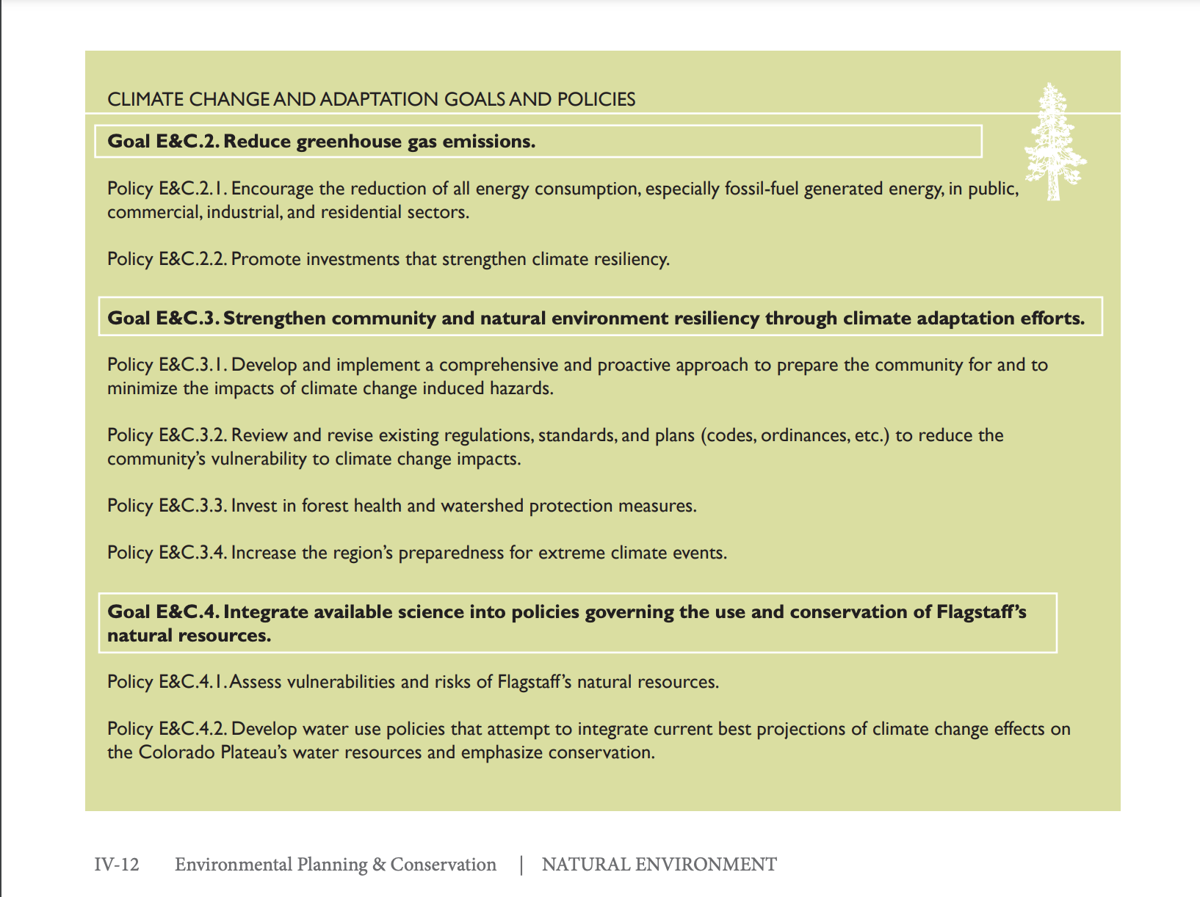 Goals and policies listed within the climate change and adaptation section of the Flagstaff Regional Plan 2030. Courtesy of City of Flagstaff.

A screenshot from the biweekly Planing and Zoning Commission meeting, which featured a citizen's review session, Oct. 27.

Goals and policies listed within the climate change and adaptation section of the Flagstaff Regional Plan 2030. Courtesy of City of Flagstaff.

On Wednesday afternoon, the Flagstaff Planning and Zoning Commission hosted a citizen's review of a proposed amendment to the Flagstaff Regional Plan 2030 in order to further align it with the Flagstaff Carbon Neutrality Plan.

Flagstaff’s Climate and Energy Specialist Jenny Niemann started the citizen review by giving a brief overview of the goals of the Flagstaff Regional Plan.

“This document is our roadmap to implementing our community’s vision,” Niemann said. “That’s why we’re having this amendment, because the Carbon Neutrality Plan and associated conversations have really shown the evolution of the community’s conversation on climate action and carbon neutrality.”

Niemann said a comprehensive climate plan is necessary, not only for current residents, but also for those who may be forced to move to Flagstaff as the climate crisis worsens. In order to accomplish this, the original Flagstaff Regional Plan, approved in 2014, focused on three major goals: Reducing greenhouse gas emissions, fostering resilience against the negative effects of climate change and lastly, integrating science into Flagstaff’s governmental policies regarding climate action.

Niemann said residents of Coconino County have already experienced many of these negative effects for years.

“They may be folks who are coming just for the weekend, but that’s an increase in second homes,” Niemann said. “There’s a lot of different ways that we’ll start to see more people in our area.”

The Flagstaff Regional Plan 2030 amendment makes adjustments under three categories: Revisions to goals, revisions to policies and the addition of four new policies. All of these changes were enabled by a climate profile done in 2017, which provided more accurate data than that which was available when the Regional Plan was ratified by voters in 2014.

The amendment makes two changes to goals described in the Flagstaff Regional Plan 2030. Firstly, it sets the concrete goal of achieving carbon neutrality in Flagstaff by 2030, whereas previously, it only pledged to lower greenhouse gas emissions. Second, it emphasizes the importance of helping communities most affected by climate change.

Moreover, this amendment seeks to edit the language of four policies listed in the Regional Plan, such as adding or removing detail where needed. Through city regulations, the Regional Plan amendment emphasizes the importance of reducing additional impacts of climate change on vulnerable communities. Finally, it states that risks to Flagstaff’s natural resources should specifically be evaluated “in the context of anticipated climate changes and resulting changes to Flagstaff’s systems.”

In addition to these changes, four new policies are added. First, it promises to review and revise existing regulations to reduce greenhouse gas emissions. Second, it states that efforts will be made to promote more sustainable development to help neighborhoods and communities in pursuing carbon neutrality. Third, it pledges to help vulnerable communities seeking to adapt to climate change. Finally, the Regional Plan Amendment stresses the importance of equitably distributing the burdens of all the previous policies and goals which the Flagstaff Regional Plan discusses.

Equity was a recurring theme throughout the discussion of the amendment. These adjustments were designed with the understanding that not everyone is affected by climate change in the same ways, and as such, some will require more aid than others. Ricardo Guthrie, associate professor in Ethnic Studies and member of the Planning and Zoning Commission, spoke on this topic, stressing the importance of equity and of having robust systems in place to determine the needs of Flagstaff community members.

Two hearings will be held — Nov. 10 at 4:00 p.m. and Nov. 17 at 4:30 p.m. — regarding the Flagstaff Regional Plan Amendment. These meetings can be streamed on the City of Flagstaff’s website and are open to members of the public. Then, the adoption of this amendment will be discussed Dec. 7 at 3:00 p.m. at Flagstaff City Hall.