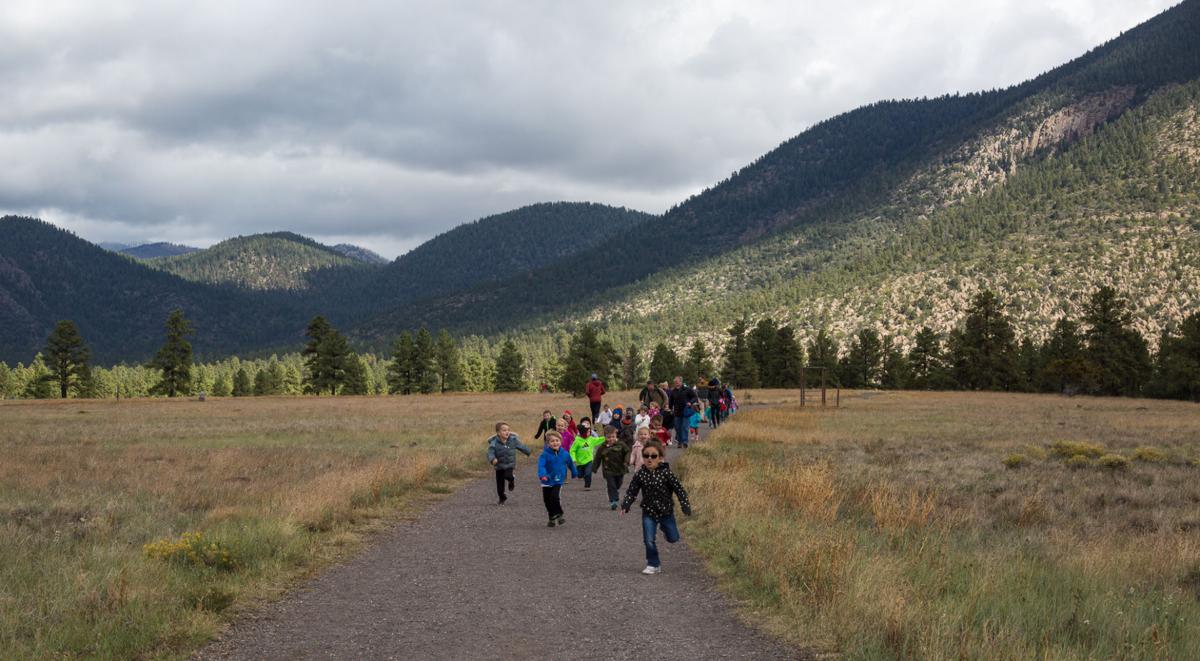 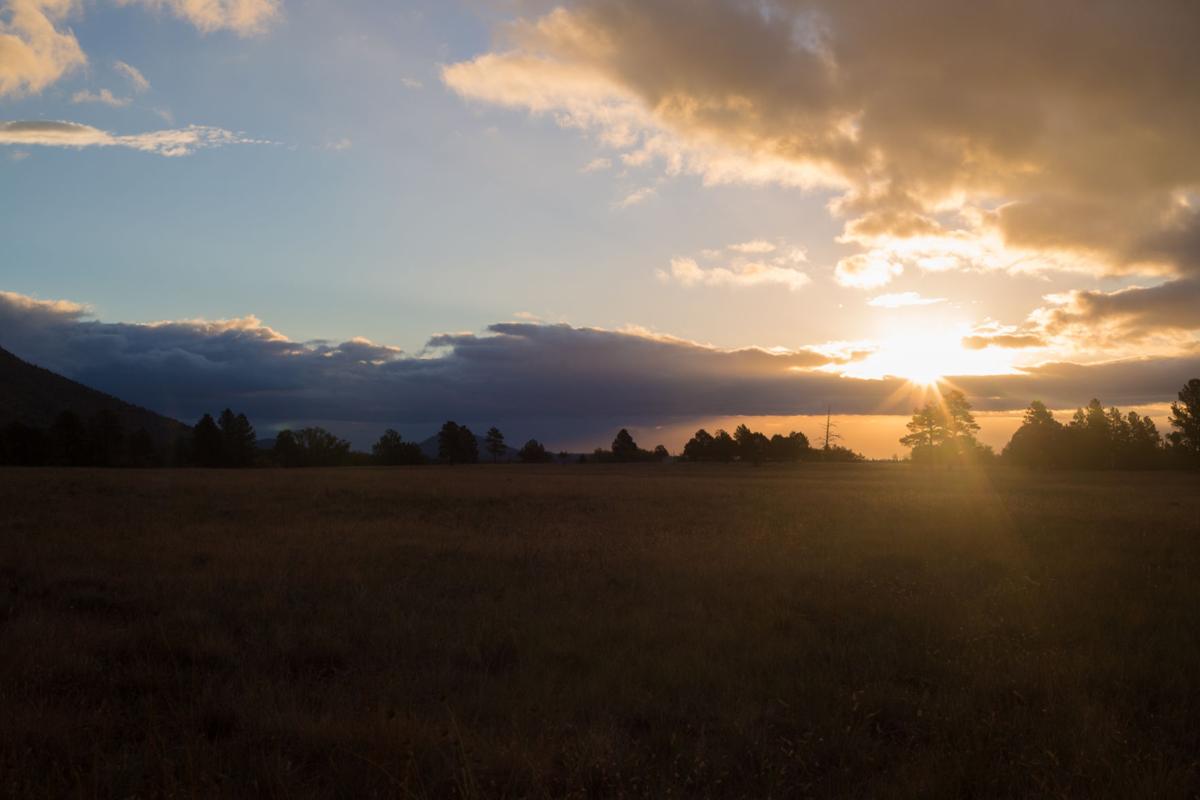 On a cold and cloudy morning Oct. 11, 2018, the sun rises over Buffalo Park as early runners and dog-walkers pass along the trails. (Photo by MacKenzie Brower) 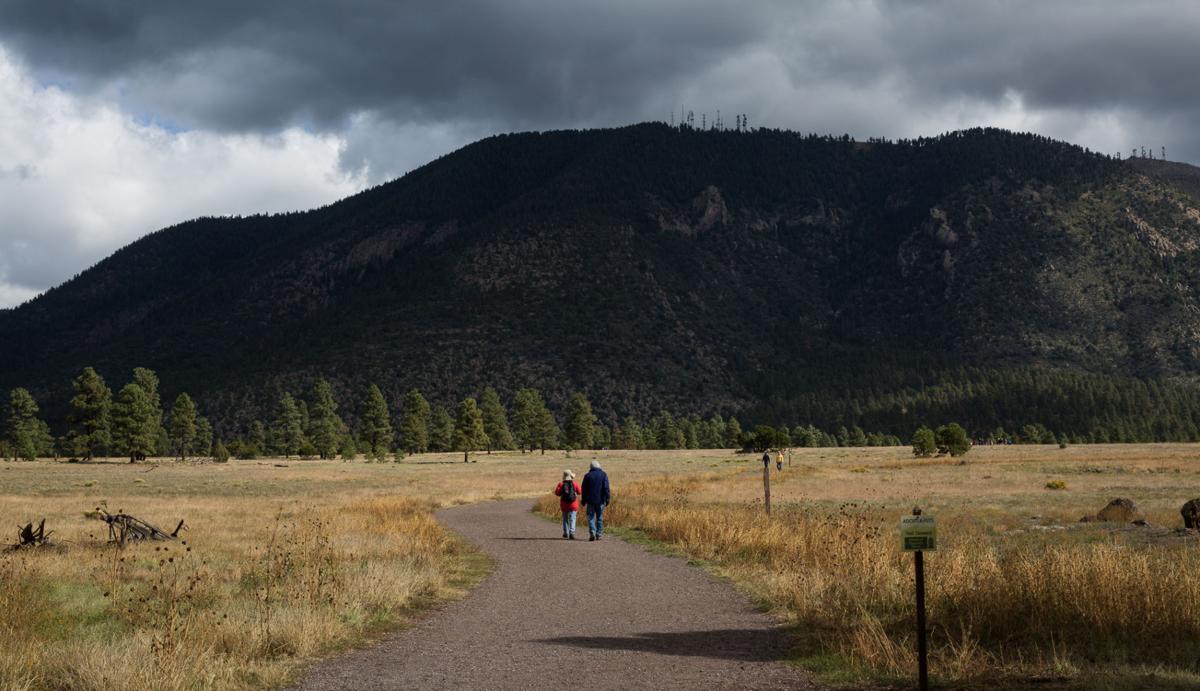 Sylvia and Garry Wright, having come straight from the Grand Canyon, take a midafternoon stroll through Buffalo Park Oct. 10, 2018. (Photo by MacKenzie Brower)

On a cold and cloudy morning Oct. 11, 2018, the sun rises over Buffalo Park as early runners and dog-walkers pass along the trails. (Photo by MacKenzie Brower)

Sylvia and Garry Wright, having come straight from the Grand Canyon, take a midafternoon stroll through Buffalo Park Oct. 10, 2018. (Photo by MacKenzie Brower)

City Council gathered Oct. 9 and discussed an issue regarding the possible creation of another road to attempt to reduce congestion in Flagstaff. The road was part of Flagstaff’s Regional Plan and was previously intended to connect Ponderosa Parkway with North Gemini Road, which would cut through McMillan Mesa.

In 2016, Flagstaff voters approved Proposition 413, which preserved the city-owned land of McMillan Mesa, protecting it from being developed. Due to this, City Council supported the wishes of their constituents by eliminating these construction plans.

Council member Charlie Odegaard explained that despite the proposed road having potential benefits, the council had to side with the voters.

“One of the benefits would be having a north-south connection in the middle of the city. But the voters were very clear that they wanted that land to be left alone as the proposition passed with 88 percent approval,” said Odegaard.

Council member Scott Overton stated that Proposition 413 was not the best way to designate city property because it limits options for transportation.

“I think there’s going to be drawbacks in the transportation network, but voters accepted this consequence as a value trade during the election process,” said Overton.

Sarah Dechter, the comprehensive planning manager for Flagstaff, clarified that a road is still in the works but it would instead be built around the mesa.

Currently, there is a Ponderosa Parkway completion that would move forward, connecting East Route 66 to North Pine Cliff Drive. This proposed road would not only help Flagstaff locals get around easier, but also help improve fire department response times.

Dechter explained there is a fire station located south of Ponderosa Parkway that needs better access to west Flagstaff.

“The fire station was built in that location based on the future connectivity of the road network, and the overall regional growth is a factor because when other streets are congested, traffic cannot be diverted,” said Dechter.

Dechter also said that she, the city’s Traffic Department and Flagstaff Police Department’s traffic division met with homeowners who have driveways on Pine Cliff to discuss the difficulties of increased traffic volume near their homes.

They also conducted research and detailed the consequences of the road not being built. Growth projections show that traffic on Pine Cliff is estimated to increase by 150 percent by 2040 compared to today’s traffic. Needless to say, some of the residents have concerns.

“We’re starting to work on a plan to address their concerns. Not all of their concerns will be addressable and they understood,” Dechter said.

Although this new connection was discussed by staff and City Council, there is no timeline on construction because it is not currently funded or included in the Capital Improvement Plan.

The Committee for Greater Buffalo Park was responsible for Proposition 413’s success in 2016. According to Marilyn Weissman, the chairperson of the committee, the construction of more roads will not solve Flagstaff’s transportation problem.

“When you build more roads it just makes more places for cars to go, it doesn’t necessarily help in terms of traffic volume,” said Weissman.

The treasurer of the committee, Andy Bessler, said residents value open space even more as the city continues to expand. He explained that Flagstaff has a history of residents stopping big developments on public land. In the 1920s, developers wanted to put an airport on Mcmillan Mesa, but voters rejected it.

Past City Council members have suggested the construction of a highway in the 1990s through Buffalo Park and also explored the possibility of putting a dam in Switzer Canyon. In addition, city planners have also proposed drilling on McMillan Mesa for possible wells, but voters refused all of these initiatives.

“It’s almost like a tradition. Conserving land keeps our economy going because people want to visit and spend their money here,” said Bessler.

Bessler added that Proposition 413 didn’t completely restrict development on McMillan Mesa, as an area of land was designated for a future veteran’s home. In his view if voters wish to develop the land in the future, they can do so in a future election.

A public hearing further discussing this issue will occur at the next City Council meeting on Oct. 16.