Skip to main content
You are the owner of this article.
Edit Article Add New Article
You have permission to edit this article.
Edit
Home
News
Opinion
Features
Culture
Sports
Multimedia
Gallery
PRINT EDITION
LJ in the UK
Search
1 of 6 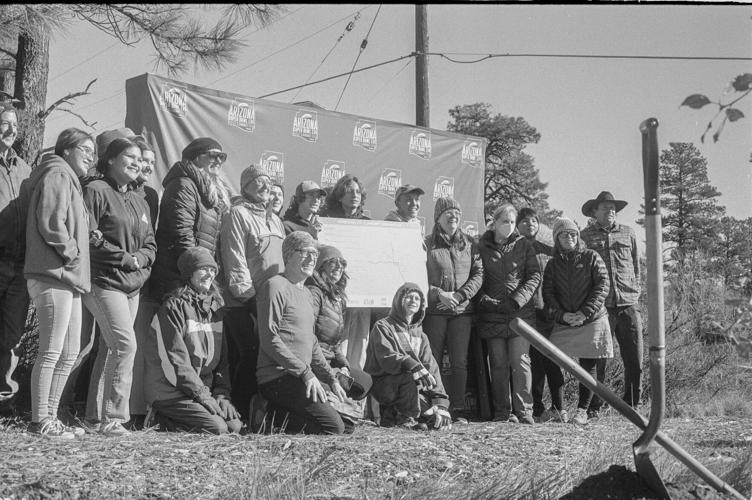 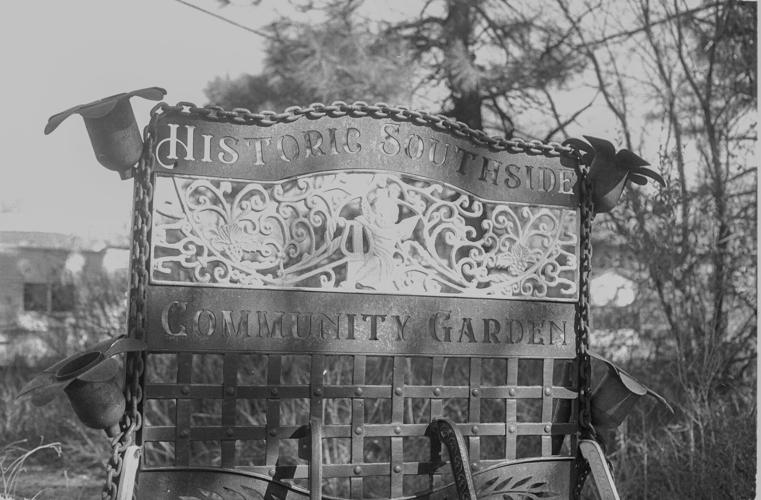 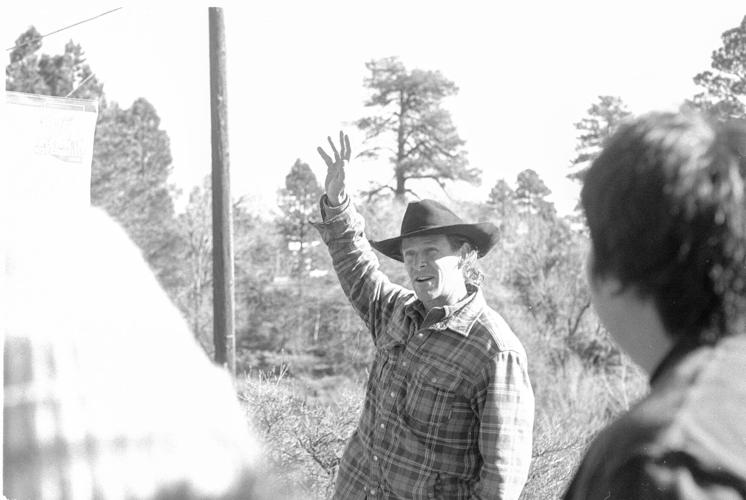 John Taylor, founder of Terra BIRDS, introduces himself during a volunteer event in collaboration with NFL Green and the NFL Super Bowl Host Committee, Nov. 11. 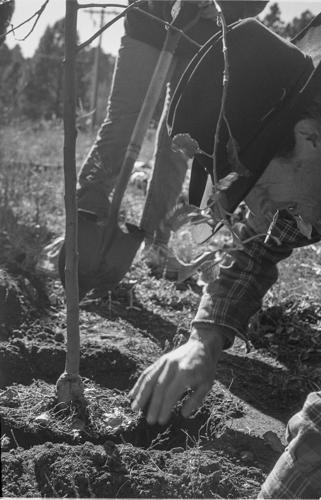 John Taylor, founder of Terra BIRDS, helps plant a tree in the Southside Community Garden during a volunteer event in collaboration with NFL Green and the NFL Super Bowl Host Committee, Nov. 11. 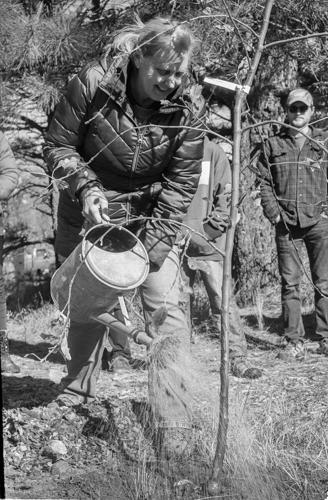 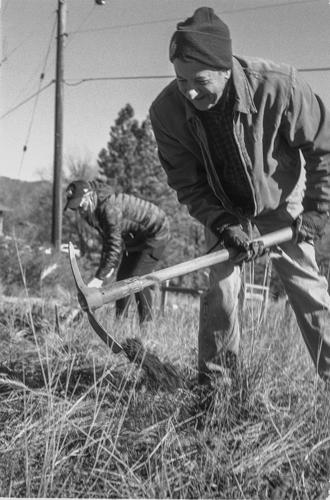 James Allen, a NAU Professor and interim dean of NAU’s School of Forestry, uses a pick to turn up a garden bed during a volunteer event at Southside Community Garden, Nov. 11.

John Taylor, founder of Terra BIRDS, introduces himself during a volunteer event in collaboration with NFL Green and the NFL Super Bowl Host Committee, Nov. 11.

John Taylor, founder of Terra BIRDS, helps plant a tree in the Southside Community Garden during a volunteer event in collaboration with NFL Green and the NFL Super Bowl Host Committee, Nov. 11.

James Allen, a NAU Professor and interim dean of NAU’s School of Forestry, uses a pick to turn up a garden bed during a volunteer event at Southside Community Garden, Nov. 11.

Volunteers joined NFL representatives Nov. 11 to plant a tree and install new garden beds in the Flagstaff Southside Community Garden. NFL coordinators said they want the upcoming Super Bowl in Arizona to have a legacy lasting further than the game.

On Veterans Day, local volunteers spent their day off shoveling, digging and planting in 32-degree weather. Volunteers gathered at the garden at 10 a.m. to hear speakers from NFL Green, Terra BIRDS, the Flagstaff Sustainability Office and the Arizona Super Bowl Host Committee, which organized the event.

After the speakers were finished and a plan was made, volunteers took a group photo before getting into teams and beginning the gardening process. Tools, snacks and parting gifts were all provided by the NFL.

Super Bowl LVII will take place at State Farm Stadium in Glendale on Feb. 12, 2023. It will be the fourth Super Bowl held in Arizona.

Jay Perry is president and CEO of the Arizona Super Bowl Host Committee. Perry and her team began work 16 months ago in preparation for the game in February. Working on small community projects, Perry said, is what makes her job both exciting and challenging.

“The idea of beautifying and rehabilitating a community garden, getting it ready for next season’s crops and putting in the apple tree that we did today, I’m excited to come back in a few years, drive by and see it still going,” Perry said.

Moreover, Perry said the committee wants this to be an Arizona Super Bowl, not only for Phoenix. Around 5,000 volunteers have contributed to projects sponsored by the NFL in Flagstaff, Mesa and Tucson.

The most recent Super Bowl at SoFi Stadium in Los Angeles was criticized for its effects on the local economy, increasing construction and displacing residents.

With the host committee, Perry said they focus on making a positive impact.

“When the event is the magnitude of Super Bowl, it does come in and kind of take over the region,” Perry said. “What we try to do as a host committee is create something for everybody.”

Perry said the last Super Bowl to be hosted in Arizona at the University of Phoenix Stadium in 2015 was a major success, and they hope their work for 2023 will elevate the game even more.

One of the event’s organizers was the City of Flagstaff Sustainability Office, where Jacob Raatz works in sustainability and food systems. Raatz said they were there Friday partly to help mitigate some of the effects of the Super Bowl on the environment.

“Every business and franchise and cooperation out there, I think, is trying to find ways to help mitigate their carbon footprint, and that comes from a lot of different areas,” Raatz said. “You can’t pinpoint it on just one, but I think that this program is a great way to put a step forward in showing that they care and are willing to engage with the community.”

Major events like the Super Bowl, Raatz said, increase traffic and overall carbon emissions. Furthermore, Raatz said issues that already exist in a city tend to be further concentrated by large events, one example being problems with public transport.

Coordinators with the NFL have been working to assist Arizonans with projects across the state. Raatz said he appreciates they are seeking out individuals with ideas already in mind rather than creating new projects. Continuing to grow its community gardens is something the City of Flagstaff has been working on for years.

“This was something that the city was looking forward to, accomplishing and continuing to develop the city’s community space, and so I think the league was great to jump on that opportunity,” Raatz said.

During these events, something new is usually added to the garden. On Friday, volunteers added an apple tree and four new beds.

Elizabeth Taylor is on the board of  Terra BIRDS — a Flagstaff group that aims to educate youth through gardening. Taylor said she was thrilled welcoming the NFL coordinators to Flagstaff.

“That’s what community gardens are all about, bringing people together to garden,” Taylor said.

The Southside Community Garden is the newest out of the three in Flagstaff, Taylor said. It still is building its character. Taylor said maintaining a community garden is always challenging, but the ones who stay connected are the most successful.

“What’s cool today is we have people from out of town bringing resources and money to support and commemorate an event in the state,” Taylor said. “We have kids, we have young adults, we have old adults who are all here because we think it’s really important to have community gardens.”

The Southside Community Garden has available community beds for people who want to plant. Everything in the garden has been done by the community.