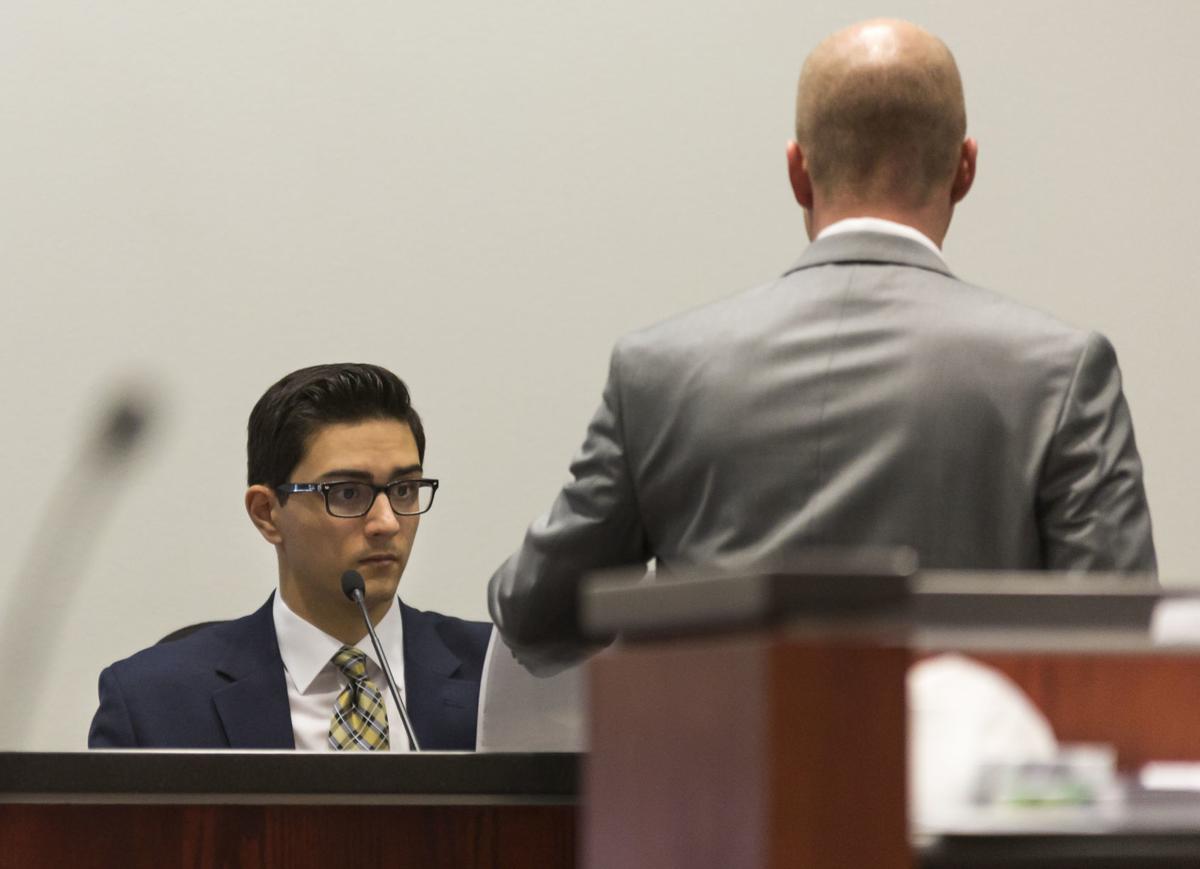 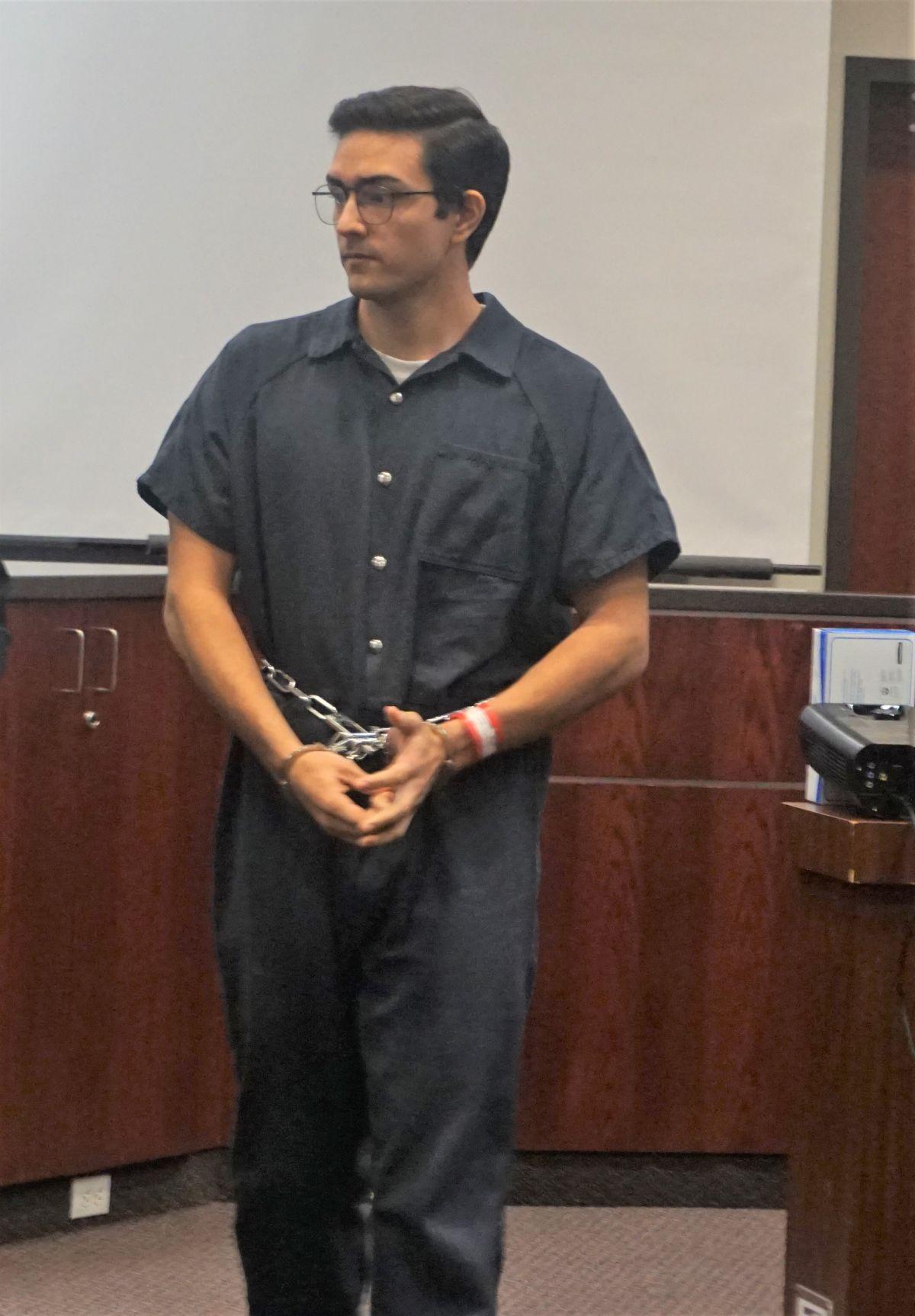 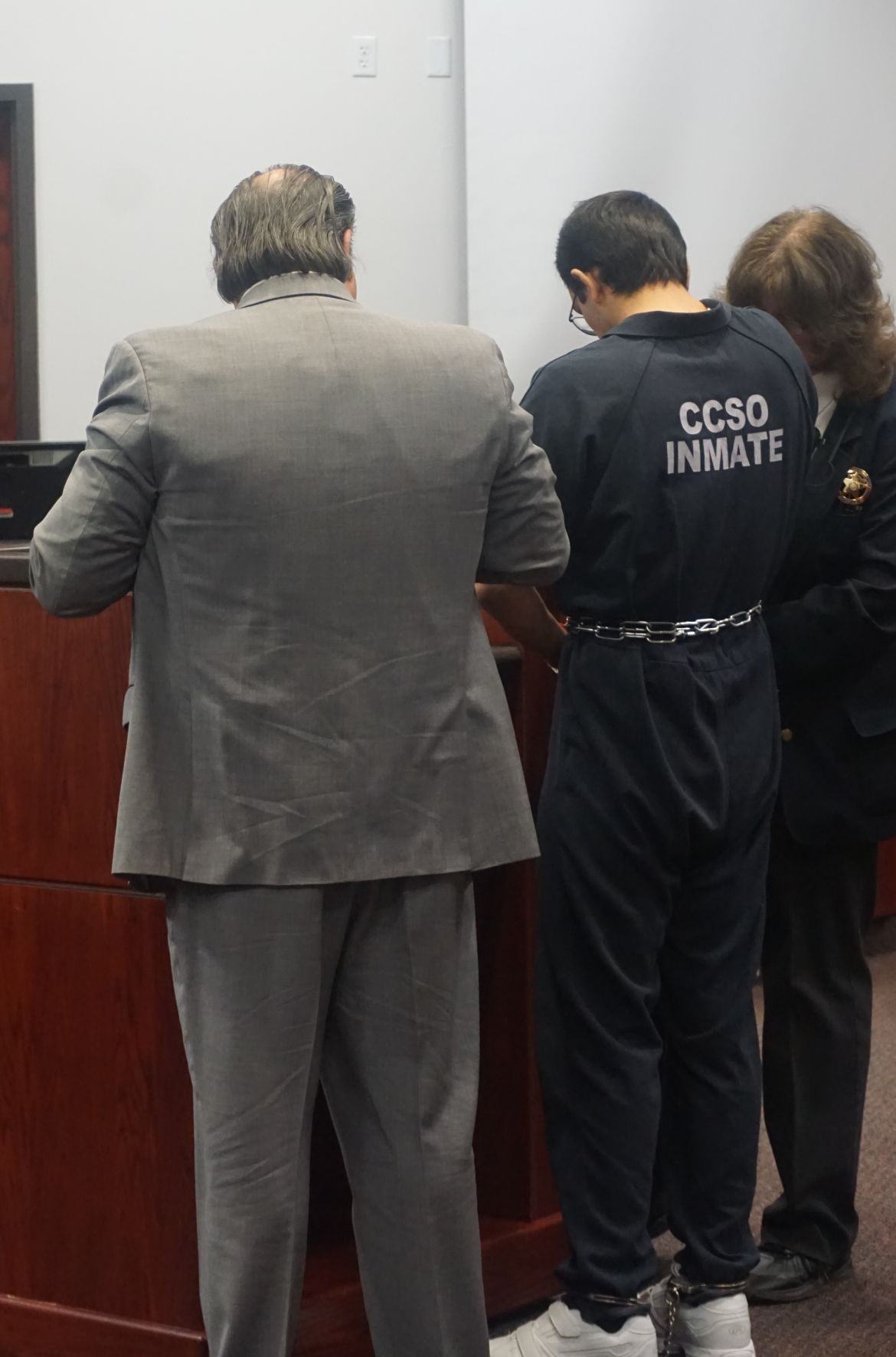 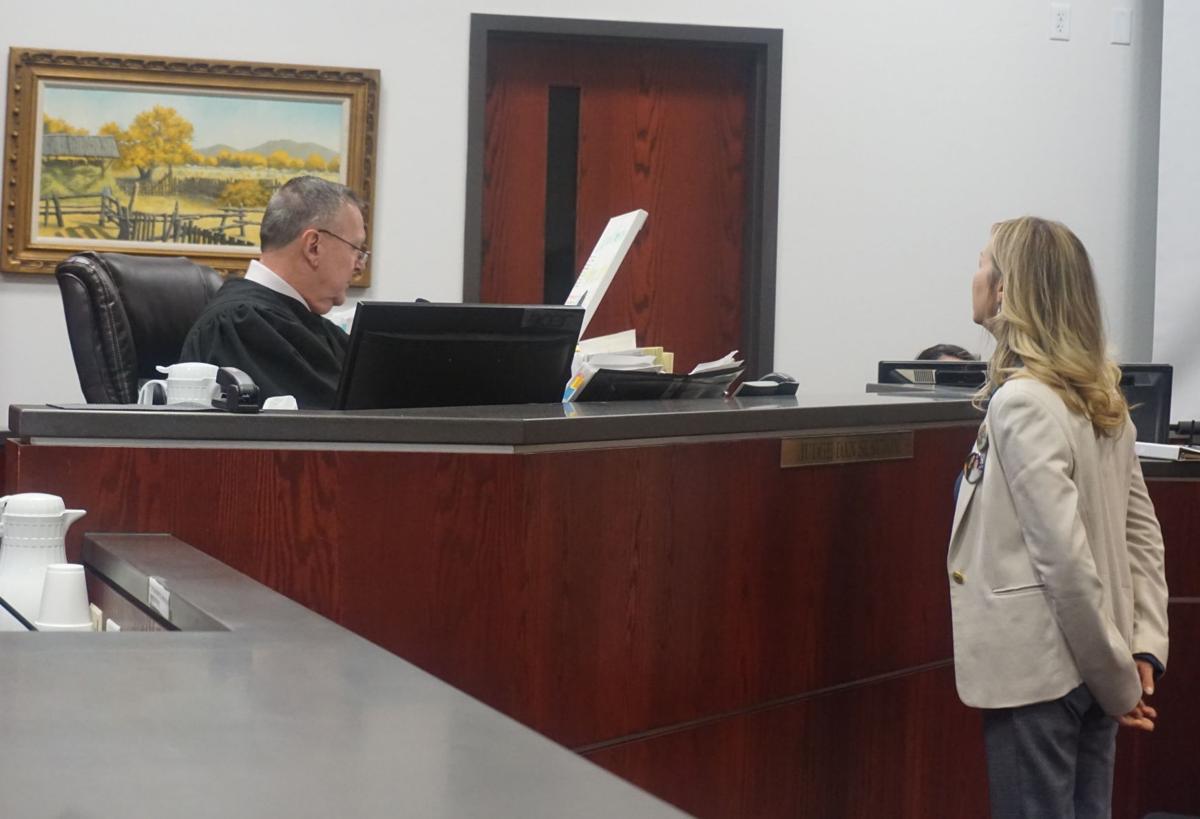 Jones, who acknowledged firing the shots that killed 20-year-old Colin Brough and injured three others Oct. 9, 2015, is required to serve a minimum of 85% of the sentence based on a plea agreement that was reached prior to the sentencing. Jones formally accepted a plea deal Jan. 9 shortly after an agreement was reached by the defendant and prosecutors.

Jones was sentenced to six years on one count of manslaughter and also received five years each on three counts of aggravated assault. Jones was allowed to serve the sentences concurrently, which amounted to six total years in prison based on his longest sentence. Jones has 212 days of credit based on previous time served.

“As to count one, manslaughter, charge involving Colin Brough, you are hereby sentenced to six years,” Judge Dan Slayton said.

Both the plea deal and sentencing followed a mistrial in 2017.

The prosecution began with a five-minute body cam video of one of the victims, Nick Piring, on the night of the incident. In the footage, Piring is shown being treated for gunshot wounds while he pleads for police to save his roommate, Colin Brough.

“Save him, save him. Colin. He’s the one that was shot in the chest,” Piring said in the video.

Victim Kyle Zientek described the shooting from his perspective. Jones approached from a parking lot equipped with a handgun, mounted with a flashlight. Zientek said he and his friends first thought it was a police officer. Then, Jones began to fire in rapid succession.

Zientek was shot twice in the back. His friends, Piring and Nick Prato, were also shot. Piring sustained injuries to his shoulder and hip and Prato sustained an injury to his neck.

Prato was not present. Prosecution attorney Lou Diesel read a letter on his behalf. Prato did not want to be involved or in the presence of Jones, the letter stated. Colin Brough, who was shot in the chest, died at the scene.

Colin Brough’s  injuries included a perforated lung, vena cava and aorta. Both shots struck his front side, and a medical examiner’s report indicates that he was leaning forward at the time of being shot.

“I wanted to speak to you today because I felt like I owed it to Colin,” Zientek said while addressing Judge Dan Slayton.

“There has been no remorse from the shooter or his family,” Doug said.

Colin Brough’s mother, Claudia Brough, was the last to speak for the prosecution. She spoke about her pain following her son’s death, which included “two nervous breakdowns in two different mental facilities.”

Colin Brough’s family expressed their love for him and their immense pain following his death. All victims, including family members who spoke on Colin Brough’s behalf, requested Jones be sentenced the maximum of 10 years.

Following two hours of statements from the prosecution, the defense began by paying respects to the Colin Brough family. One of Jones’ attorneys, Christopher DuPont, talked about Jones’ life before the 2015 incident and cited praise from his peers.

Audio from a 911 call from the night of the incident played, followed by a demand for justice from the defense.

“We’re never going to get from here back to where we started. The best we can do at this point is justice,” DuPont said.

DuPont expressed his grief over the case, particularly in regard to Claudia Brough. He noted time spent in therapy and other personal experiences during the defense’s opening statement.

A presentation from the defense detailed the “convergence of circumstances that led Steven to be involved in this criminal conduct.” DuPont said Jones had never been in a physical altercation before Oct. 9, 2015.

DuPont detailed the events leading up to the incident and relevant circumstances. The defense claimed Delta Chi, the fraternity of which the victims were involved, was a hub for criminal activity.

The attorney contended that fraternity members’ attack on Jones was an “unprovoked assault.” DuPont presented possible circumstances that led to the assault, including a ding dong ditch, alcohol and drug use, exclusion from a fraternity party and emotional convergence.

Environment, stress, drugs, alcohol and youth were among other factors listed by DuPont.

DuPont played a recording from Nick Pletke, member of Delta Chi who witnessed the shooting, describing the violence that can occur within fraternities. Pletke assaulted Jones, putting him in a “rear choke naked choke hold,” according to the defense.

Fraternities create a pattern of “coordinated thoughts and behaviors of relationship partners,” DuPont said. A video from Aug. 30, 2015 of a fight occuring at an NAU Delta Chi fraternity was played. In the video, yelling and bottles breaking can be heard in the background as a fight ensued. DuPont said he “would not be surprised” if the Aug. 30 altercation looked similar to the Oct. 9 incident that led up to the shooting.

DuPont noted the positive actions that NAU fraternities take, but also said that fraternities exist as a way to circumvent state and university drinking policy.

The defense claimed Jones was “sucker punched,” during the Oct. 9, 2015 incident, knocking out his dental bridges and filling his mouth with blood.

“There’s nothing like tasting your own blood to get you excited,” DuPont said. “Fear.”

The defense primarily relied on police interviews from the night of the incident, which included testimonies not heard in court during the 2017 trial.

According to a witness testimony presented by Jones’ defense, a man in a white shirt, believed by DuPont to be Colin Brough, was running at Jones as Jones shouted, “Please stop. I don’t want to do this,” Witness testimonies presented by the Jones’ defense also placed the man in the white shirt, who was supposedly Colin Brough, 13 feet from Jones just prior to running at Jones. The defense also claims Nick Piring moved toward Jones prior to any shots being fired.

The Jones’ defense conflicted with the prosecution’s accounts that Piring was shot after trying to aid the wounded Brough.

“While the prosecution may try to make it seem like the victims were standing around, trying to help, the truth is that they were all involved,” DuPont said.

DuPont also referenced a medical examination that confirmed that Zientek was shot in the back. The prosecution has often questioned the Jones defense for their claim of self defense based on this examination. DuPont said, that while Jones is legally responsible for Zientek’s assault, Jones was firing from his back on the ground.

“He’s been beaten, he’s been concussed, his teeth are knocked out; it is during these brief moments that Steven made the reckless decision,” said DuPont. “He was undoubtedly impaired.”

DuPont argued that given the number of victims, along with their size and strength, and the danger perceived by Jones, his actions were justified. Jones’ injuries at the time of his initial arrest, which included harm to his head, back and chest, as well as a split lip, supplemented DuPont’s claims.

Mitigating circumstances cited were the conduct of the victims, substantial duress, impairment, cooperation during investigation, good character, young age and remorse. Jones lowered his head and began to cry as a portion of his police interview from the night of the event played before the courtroom.

The defense affirmed mitigation outweighs aggravation, in this case.

Just before the sentencing was announced, Jones was given the opportunity to speak on his own behalf.

“I would in a heartbeat, right now, trade places with Colin Brough. If he could be home with his family and I could be dead ... If I could take his place, I would. That’s all I have to say,” Jones said.