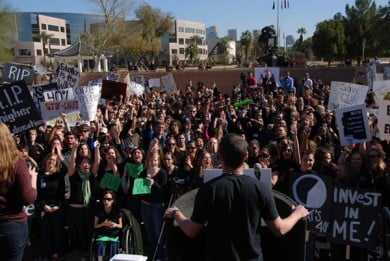 Students gather outside the state capitol Jan. 28 to protest against the state’s proposed educational budget cuts. - Mike Thompson/ The Lumberjack 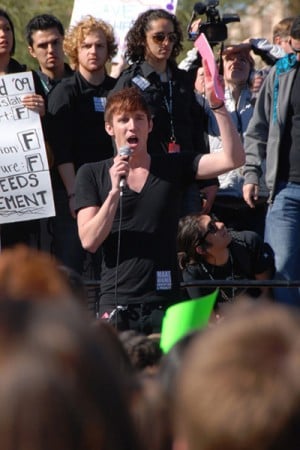 Brad Busse, president of ASNAU at the time, addresses the assembled students at the protest held in Phoenix on Jan. 28. - Mike Thompson/ The Lumberjack

Students gather outside the state capitol Jan. 28 to protest against the state’s proposed educational budget cuts. - Mike Thompson/ The Lumberjack

Brad Busse, president of ASNAU at the time, addresses the assembled students at the protest held in Phoenix on Jan. 28. - Mike Thompson/ The Lumberjack

In response to the proposed budget cuts of 40 percent for Arizona’s higher education schools, around 1,700 students gathered together at the state capitol on Jan. 28 to protest. Students from U of A, ASU and NAU, as well as alumni groups and other organizations, rallied to display their disapproval of the budget cuts.

“I think it’s great that the students are out here expressing what a priority education is,” said Gail Gabler of Service Employees International Union, a nonprofit organization dedicated to uniting workers. “We need to look for other solutions. We’re putting our children’s futures in jeopardy.”

Zach Jarrett, a sophomore math major at U of A, brought his elementary-aged daughter Julia to the rally to show that the cuts affect both current and future university students.

“Forty percent is entirely excessive,” Jarrett said. “It’s hard to believe that we would be cutting programs such as political science or other liberal arts. We hope to show the state that we aren’t going to take this sitting down and that we disapprove of it.”

Jarrett said he was disappointed in the legislature for cutting educational budget in times of financial desperation.

“It doesn’t make sense,” Jarrett said. “I know we have to cut somewhere but it’s definitely heavy-handed on the educational front.”

Students alternating chants such as “Student power” and “Hey hey, ho ho, these budget cuts have got to go,” hoped to send a message to the legislature that university students take their education seriously.

“If we cut 40 percent it would put a huge change in place,” said Kayley Smith, a senior art education major at NAU. “Classes will be bigger, teachers will be less qualified and the learning environment and college experience will be completely changed.”

“All of us have an investment in education because we are all paying for it one way or another,” Busse said. “We want to let our legislators and representatives know we feel, as students, that our education is our priority and it should be a priority to them.”

Pierre Rivera, an ASU junior physical education major from California, said he would be unable to stay in Arizona if tuition and fees increase as a result of the budget cuts.

“I already pay $9,000 a semester as an out-of-state student,” Rivera said. “ASU is a part of my life and I wouldn’t want to leave simply because it’s too expensive.”

Smith said higher education is a necessity, not a privilege, and Arizona’s educational system is already inferior compared to other state schools.

“Arizona’s education is one of the lowest in the country,” Smith said. “Arizona students are going to start going out-of-state because the education here isn’t going to be worth the money paid.”

Note: According to a statement released by President John D. Haeger, the finalized 2008-2009 state budget will require NAU to cut between $21 and $22 million for this fiscal year.  This is about $10 million less than would have been required under the proposed 40 percent cut.