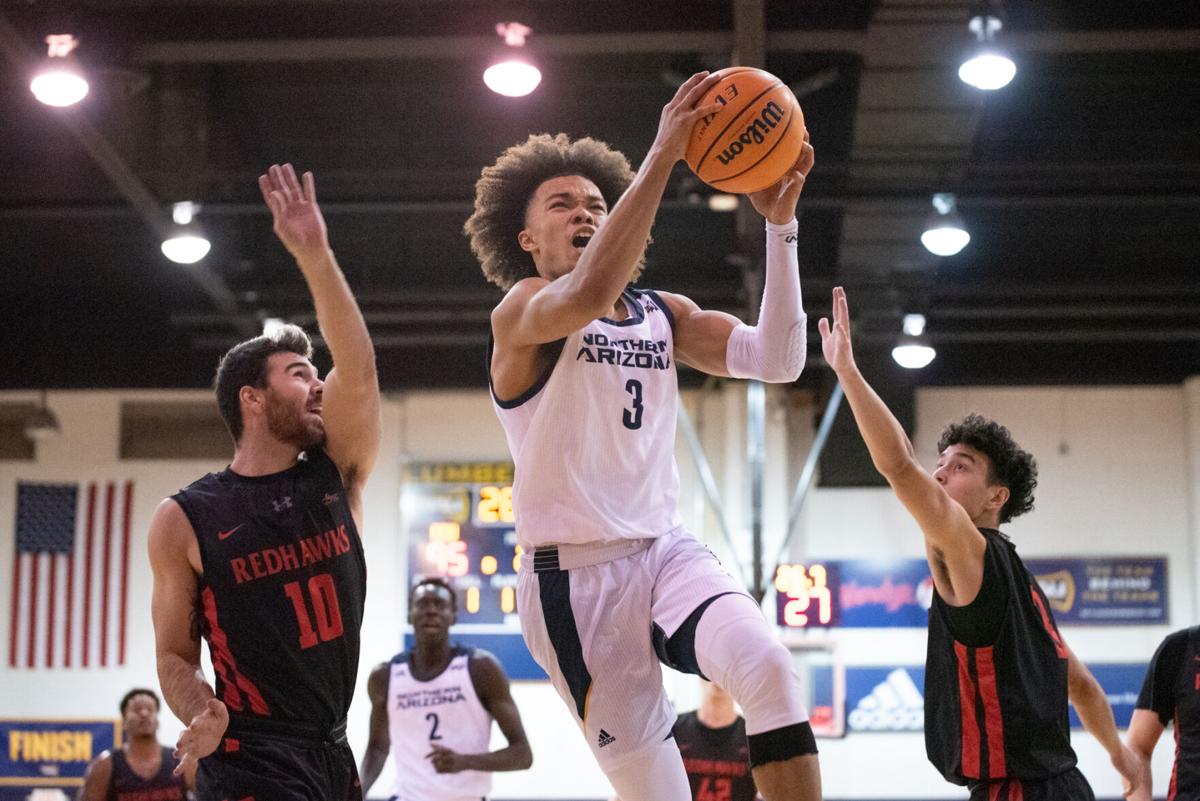 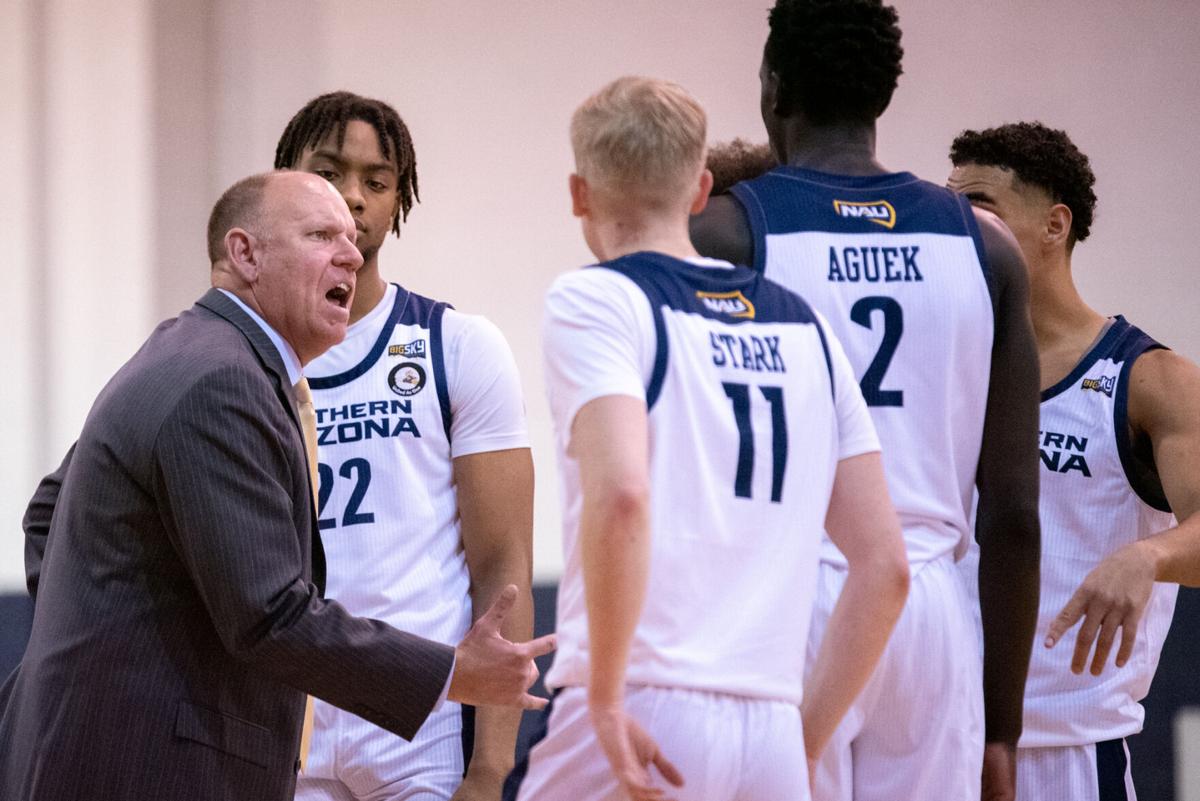 Head coach Shane Burcar speaks to his players during a timeout at Rolle Activity Center, Nov. 15. 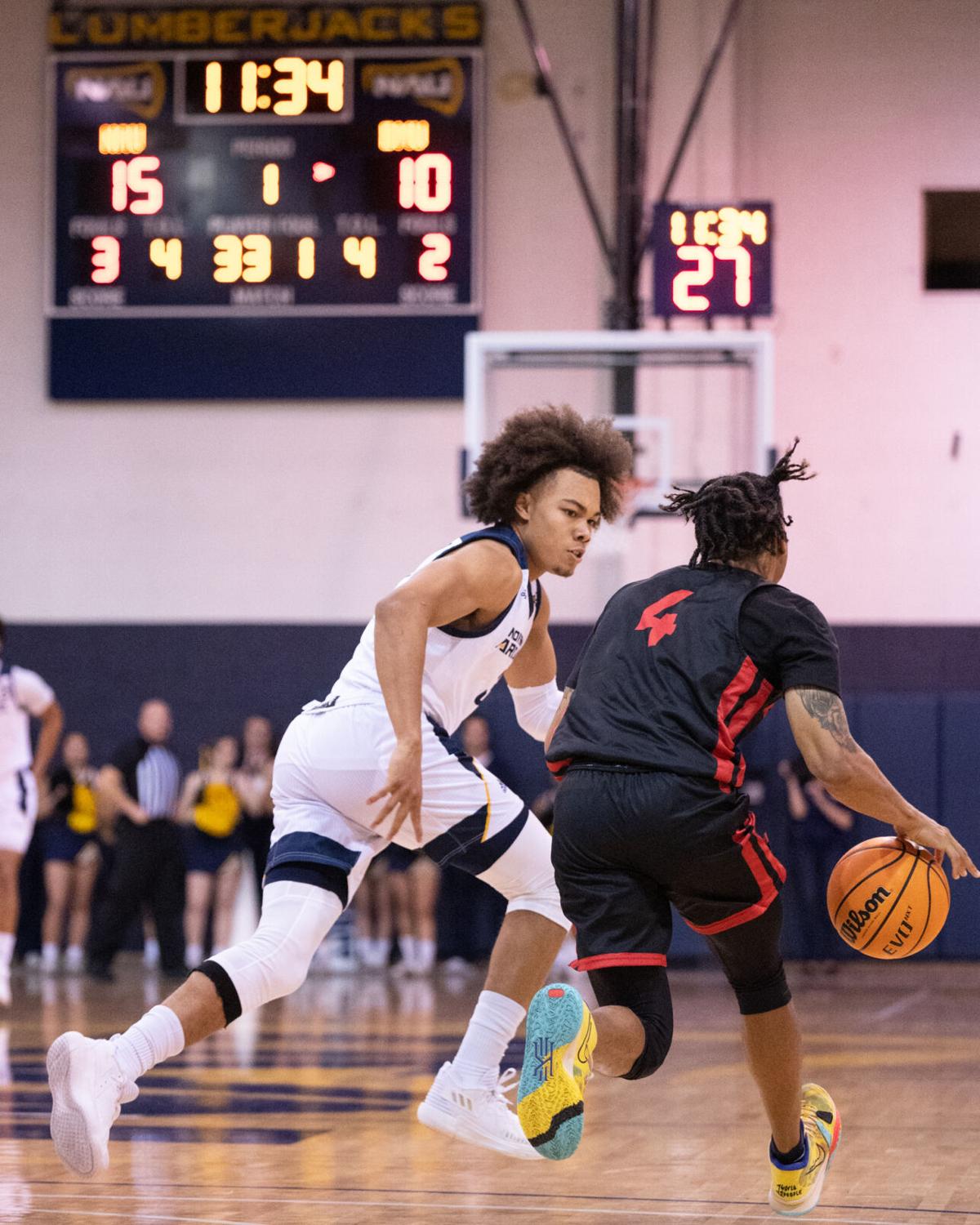 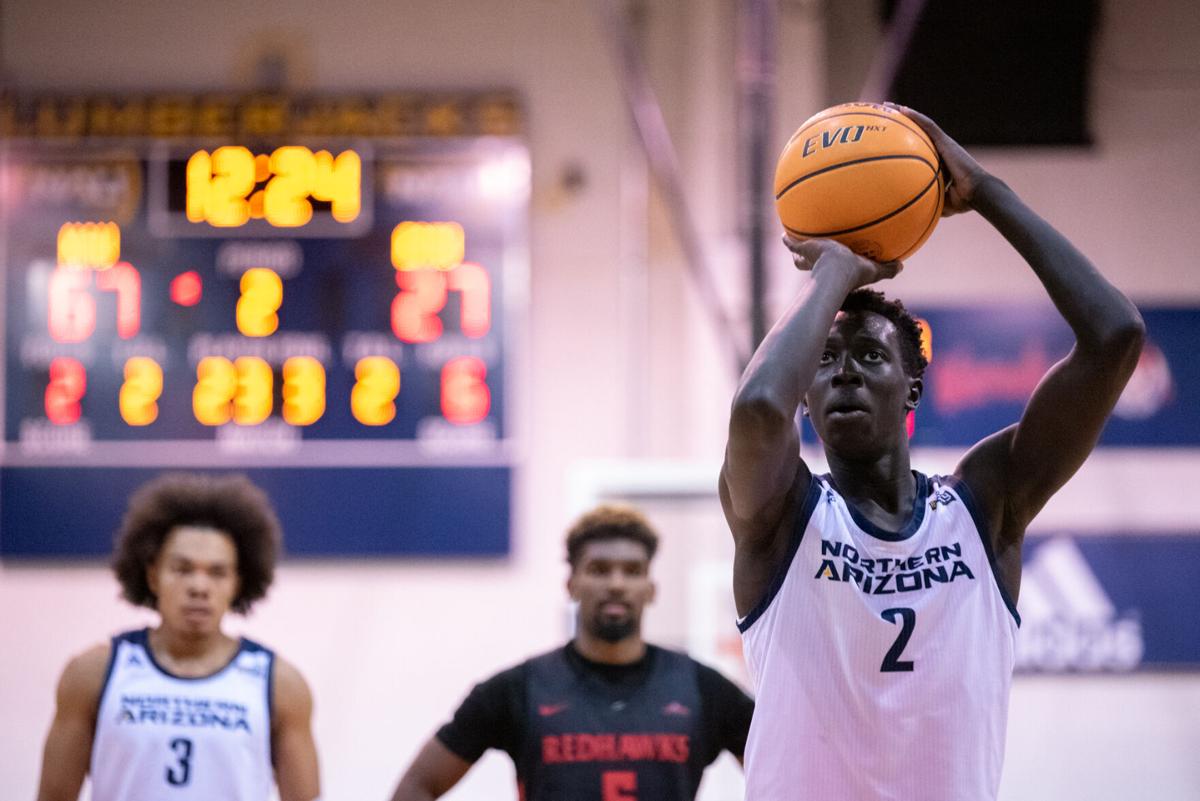 Sophomore forward Ajang Aguek (2) lines up for a free throw against Benedictine University at Mesa at Rolle Activity Center, Nov. 15. 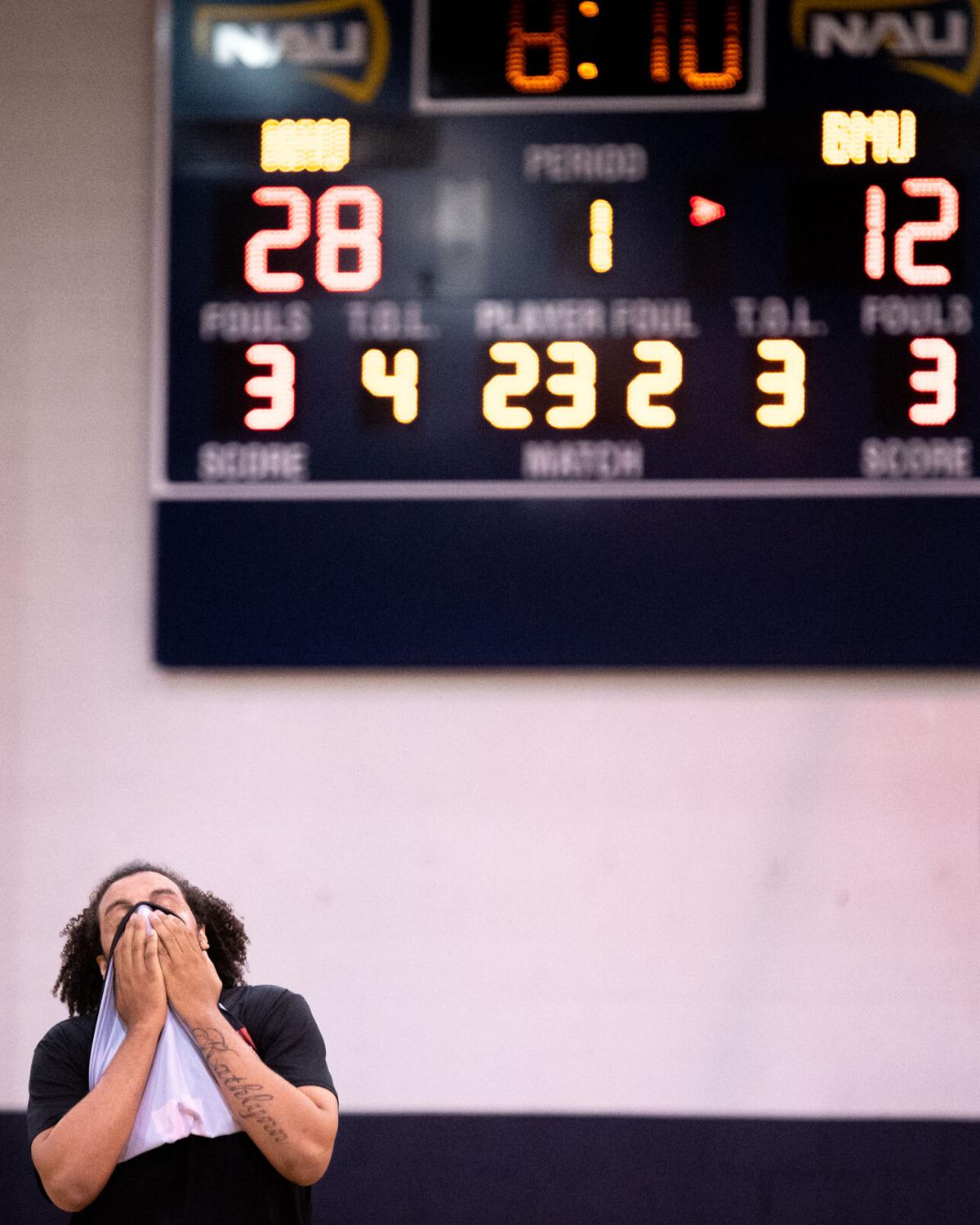 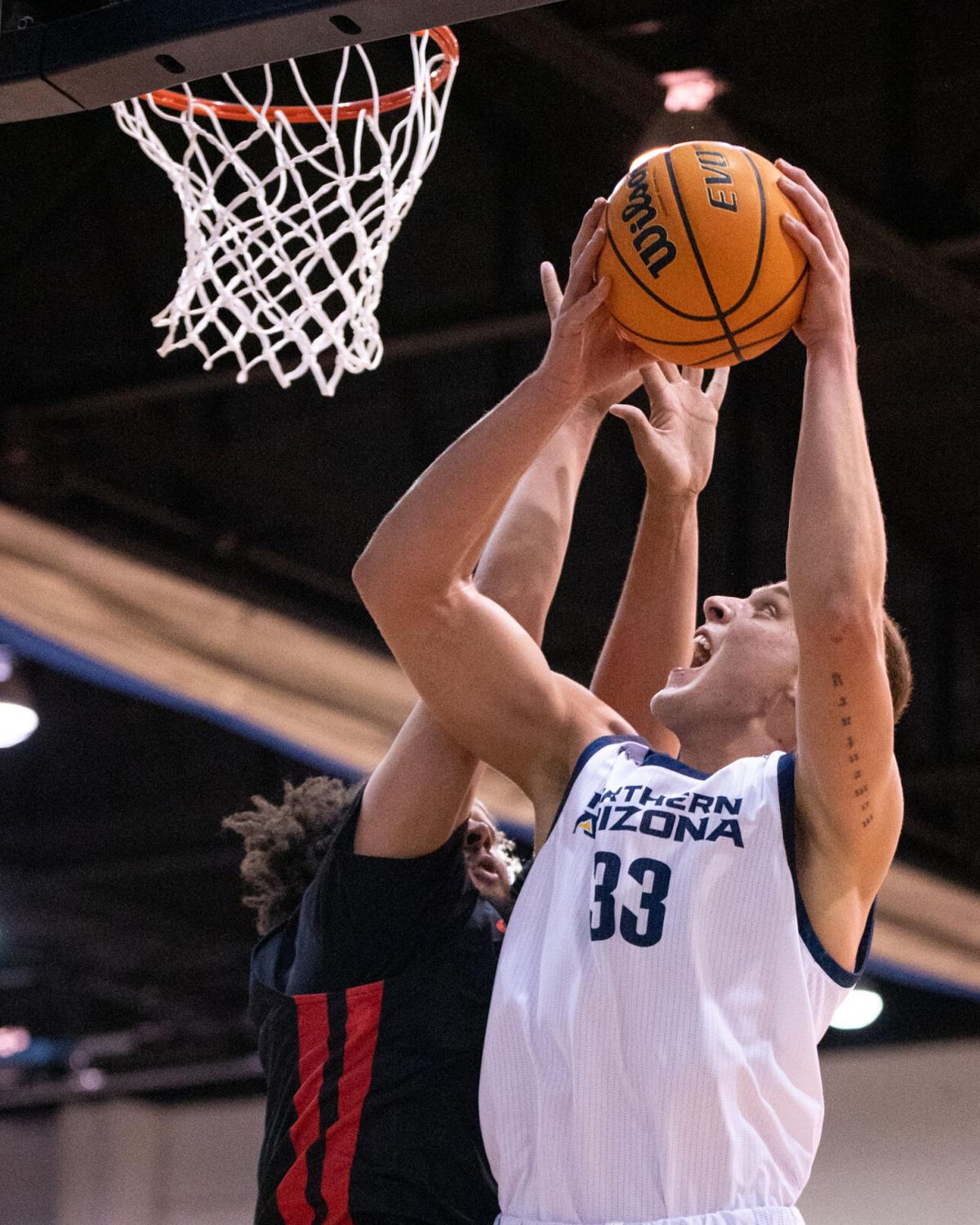 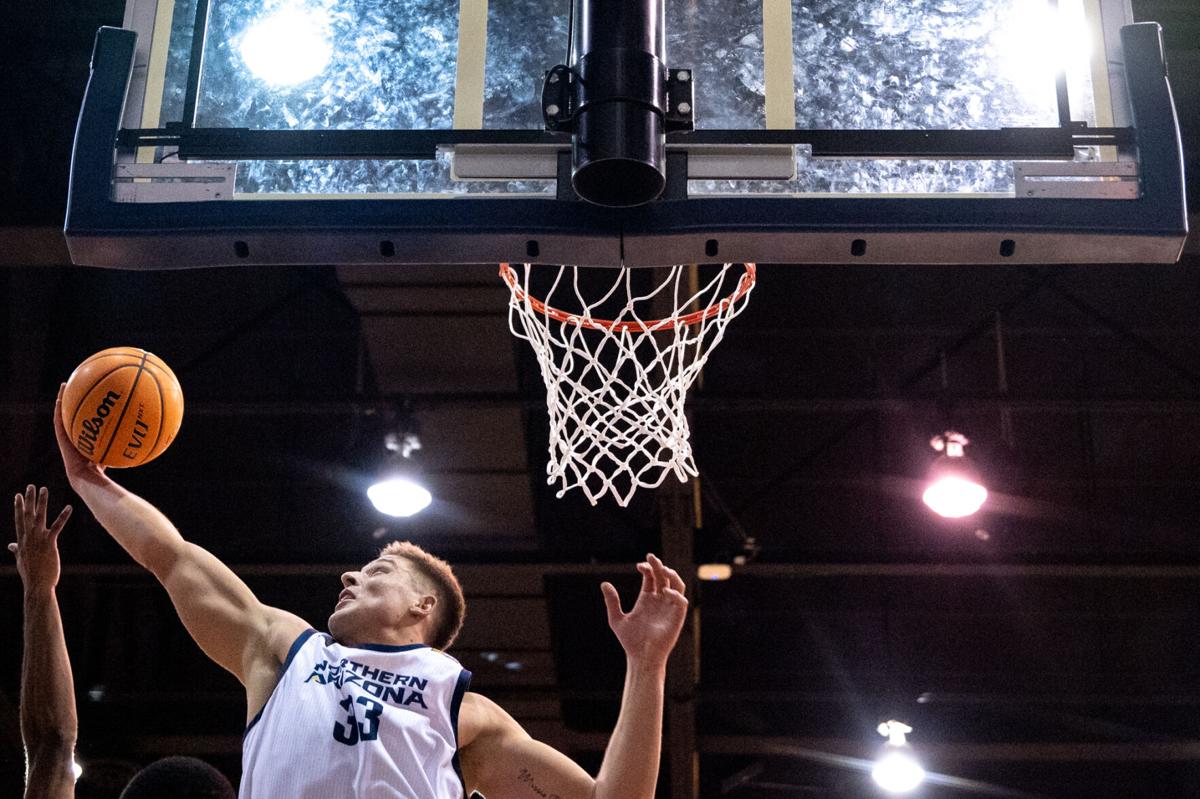 Redshirt freshman Carson Towt (33) grabs the ball out of the air to score a layup against Benedictine University at Mesa at Rolle Actvity Center, Nov. 15.

Head coach Shane Burcar speaks to his players during a timeout at Rolle Activity Center, Nov. 15.

Sophomore forward Ajang Aguek (2) lines up for a free throw against Benedictine University at Mesa at Rolle Activity Center, Nov. 15.

Redshirt freshman Carson Towt (33) grabs the ball out of the air to score a layup against Benedictine University at Mesa at Rolle Actvity Center, Nov. 15.

“It’s good to be home and shoot in this gym,” Mains said.

“As far as performances go, we have to own Flagstaff,” NAU men’s basketball coach Shane Burcar said. “You can tell the crowd was into it and we fed off them.”

After dropping their first two games against Pac-12 Conference schools, Monday evening offered a clean slate for the Lumberjacks to get the ball rolling at home.

Right from the tip-off, the confidence from NAU was noticeable.

Sophomore guard Jalen Cone struggled through the first two games of the season with 15 turnovers but showed why Burcar brought the speedy guard to Flagstaff with 10 of the Lumberjacks’ first 15 points.

A few minutes later, the rest of NAU’s roster wanted to join the fun and a 3-point bonanza occurred for the Lumberjacks as they hit seven of their first 10 shots from beyond the arc.

“We like to play in transition,” Haymon said. “We hit our shooters and were unselfish. Once we got rolling, we just kept going.”

Driving the sniper accuracy from three was Haymon, who hit three of his first four.

“I appreciate my teammates for hitting me tonight and how we found our identity,” Haymon said.

The Lumberjacks never looked back offensively and put up 51 points to end the half. They shot 50 percent in the first half and 60 percent from beyond the arc. By the time 20 minutes had passed, Haymon already blitzed his career-high as he had 16 points heading into the locker room.

Out of halftime, NAU didn’t let off the gas as it opened the final frame on a 15-2 run.

“We had no agendas,” Burcar said. “We just play NAU basketball.”

Redshirt freshman forward Carson Towt hit a pair of free throws along with a bucket to carry the stretch. By the time the buzzer sounded, he came just a point (12) and rebound (12) short of matching his career-best. Monday was also his first double-double of the season.

“I think anybody who watches us knows how important Carson is,” Burcar said. “Winner’s win and Carson’s a winner. He is everything to us.”

Sophomore forward Ajang Aguek, who came into the game only playing single digits in both of the first two games of the year, got 13 minutes of action and made the most of them with nine points on 3/5 shooting.

After catching fire to start the game, Cone only managed another two points as he capped his night with 12 on 4/12 shooting.

NAU shot 14/26 overall from beyond the arc, which goes for a whopping 53.8% to put the cherry on top of one of the Lumberjacks’ best offensive performances in a long time.

In a big step of improvement from the games against the University of Washington and UArizona, the Lumberjacks only committed eight turnovers against Benedictine Mesa after committing over 20 each in the prior two matchups.

The defense also held firm for NAU as Benedictine Mesa managed to shoot just 31 percent. The Lumberjacks forced 20 turnovers as well with Haymon and freshman forward Wynton Brown grabbing two steals each. In the post, Mains complemented his career night offensively with three blocks on the Redhawks.

The Lumberjacks showed confidence and swagger on the court and whether it be because of having fans back or an inferior opponent, the men showed their potential in nabbing their first win of the season.

“We just need to keep building with confidence,” Burcar said. “Not overconfidence or fake confidence, but real confidence because of our performance.”

Up next, the Lumberjacks will do battle with Cal State Bakersfield, who are 1-1 on the season with a loss against No. 2 UCLA and a win against Life Pacific University. The game will take place Thursday at 6:00 p.m. inside Rolle Activity Center.