Skip to main content
You are the owner of this article.
Edit Article Add New Article
You have permission to edit this article.
Edit
Home
LJ in the UK
News
Opinion
Features
Culture
Sports
Multimedia
Gallery
PRINT EDITION
Search
1 of 2 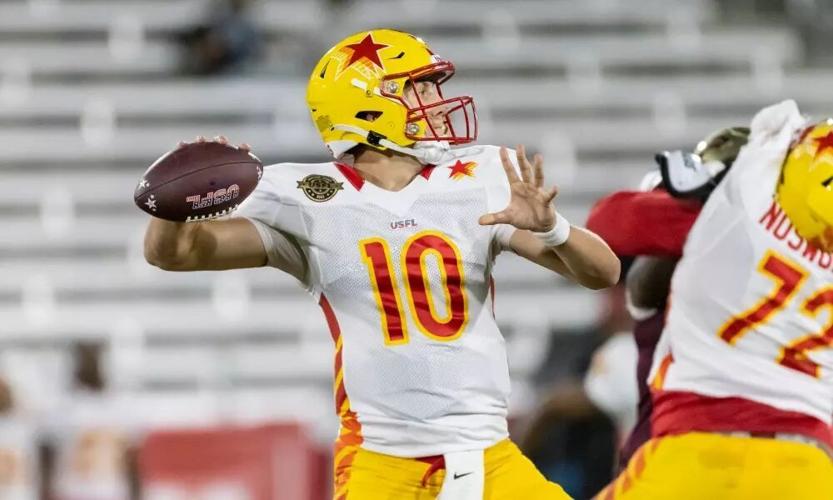 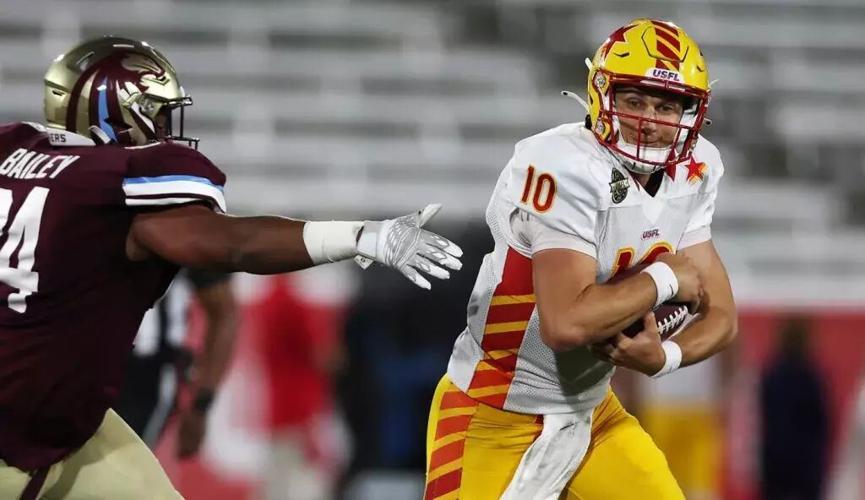 Former NAU quarterback Case Cookus has had himself quite the ride since completing his tenure as a Lumberjack. The five-year NAU starter bounced around the NFL before getting his chance in the United States Football League (USFL), which resumed operation this year for the first time since 1986. In his first career professional start on May 6, Cookus led the Philadelphia Stars to a nail-biting win against the division rival Michigan Panthers.

A 12th-round pick in the USFL Draft in February, Cookus was brought onto the Stars’ roster to be the backup quarterback to former Occidental College quarterback Bryan Scott, who was drafted by the Stars with the third overall pick.

Unlike the NFL Draft, each round is separated by position. In the 35-round affair, quarterbacks were only picked in the first and 12th rounds.

Scott started the first three games of the season for the Stars. After splitting the first two games with a loss against the New Orleans Breakers and a win against the Pittsburgh Maulers, Scott suffered a significant knee and ankle injury against the New Jersey Generals last Sunday.

Cookus made his first USFL appearance in relief for Scott against the Generals. Scott led the league in passing yards and touchdowns before his injury. In relief, Cookus completed 13-of-20 of his passes for 146 yards and his first career touchdown pass to Overton.

Despite a 24-16 loss to the Generals, Cookus played well enough to remain the starter after Scott announced that he would be taking time off the field for his injury to heal.

“I am headed back home for now, to address my injury,” Scott said in a statement he posted on his Twitter account on May 4. “Will do everything I can to make it back this season for my teammates and coaches.”

Going undrafted in 2020, Cookus has had training camp stints with the New York Giants, Denver Broncos, Minnesota Vikings and even a preseason appearance with the Las Vegas Raiders, where he had one hand-off. Although he did not stick anywhere in the NFL, Cookus did get signed by the Edmonton Elks of the Canadian Football League on Oct. 20, 2021.

The Stars won the coin toss against the Panthers and elected to receive the ball to begin the game, allowing Cookus to show off what he could do on the field early in his first start. His first pass attempt was a short completion to tight end Bug Howard.

Cookus led the Stars’ offense methodically down the field and converted on a fourth-down pass to wide receiver Jordan Suell to get Philadelphia within the 10-yard line. While the Stars were unable to reach the endzone on the opening drive, former UCLA kicker Matt Mengel nailed a 21-yard field goal to give the Stars an early lead.

In his first drive, Cuckus went 6-for-8 on pass attempts for 27 yards.

The Stars gave Cookus the ball back quickly after the field goal as cornerback Channing Stribling picked up his first of two interceptions off of Panthers quarterback Shea Patterson, who was the first pick in the 2022 USFL Draft.

Patterson struggled against the Stars’ defense, throwing three interceptions and leaving the Panther’s running game to carry much of the load on offense.

Cookus and the Stars made great use of the turnover going into the second quarter. The 2015 Big Sky Freshman of the Year turned dust into diamonds with a 39-yard strike to wide receiver Devin Gray for a touchdown.

One of the biggest draws to this new version of the USFL is the access that reporters and TV broadcasts have to the players during games. After the touchdown pass to put the Stars up 10-0, Fox Sports’ Brock Huard spoke with Cookus about the play where the quarterback gave a detailed breakdown of the play before the duo gave Cookus’ alma mater a shoutout.

The Panthers went on a rampage for nearly the rest of the second quarter by going on a 17-run to take the lead which started with Michigan converting its first field goal all season on the ensuing drive. Kicking has been an issue for the Panthers all year, something that would bite them hard at the end of the game.

A fumble by Stars running back Paul Terry after a handoff from Cookus on the first play of the next drive gave the Panthers great field position to potentially tie the game. Patterson scrambled for a touchdown run to bring Michigan to within one point, but a missed extra point by kicker Michael Carrizosa kept Philadelphia in the lead, 10-9.

However, the Stars’ lead was short-lived from there as Cookus threw an interception to Panthers safety Sean Williams Jr. on a miscommunicated play to give the Panthers the ball with 2:44 left in the first half. On the very next play for Michigan, running back Reggie Corbin ran for an 88-yard touchdown, the longest run in the USFL this season.

The Stars attempted a long 48-yard field goal that went wide right, giving the Panthers another opportunity to score with 29 seconds to go in the first half while also knowing it would receive the ball to begin the second half. Patterson’s first pass of the drive was tipped at the line of scrimmage and picked off by the Stars, turning the tides before halftime.

Stars head coach Bart Andrus, who won the 2005 World Bowl Championship as head coach of the Amsterdam Admirals in NFL Europe, was pleased with Cookus’ performance so far while still seeing room for improvement.

“He’s doing real well, I think,” Andrus said at halftime. “He’s throwing it real well. He’s been accurate when he throws it. He’s got a couple throws he’s like to probably have back.”

The second half saw both defenses begin to come into their own. The Stars forced the Panthers to punt for the first time to open the second half while Michigan put pressure on Cookus and sacked him a few times. The pressure Cookus saw forced him out of the pocket and made him make plays with his legs. He broke off for a handful of runs late in the game and took massive hits each time.

On the Stars’ first drive of the second quarter, Cookus put Philadelphia in field goal position with a run on 3rd and 16, giving the Stars a 20-17 lead after the field goal kick was good.

Stribling collected his second interception of the game, adding to his league-leading total of four, to give the Stars another opportunity to score which culminated in yet another field goal and putting Philadelphia up 23-17 going into the fourth quarter.

As the game hung in the balance, Patterson showed why he is considered the top quarterback in the league. On fourth and long, he completed his only touchdown pass to wide receiver Joe Walker.

Knowing that kicking is the team’s Achilles heel, Jeff Fisher, Panthers head coach and former NFL head coach, elected to go for a 2-point conversion even though an extra point would still have given Michigan the lead. Nevertheless, the 2-point conversion was successful, giving the Panthers a 25-23 lead in the final quarter.

Michigan forced Philadelphia to punt after Cookus was hit as he threw on third down. Receiving the ball inside the Stars’ red zone, Michigan muffed the punt and Philadelphia recovered, getting the ball right back and right in front of its end zone.

With nearly two minutes left in the game, Cookus tried to run to the first down marker but was a yard short on third down. Mengel, who had been automatic from short to mid-range distance, made another field goal to give the Stars the lead, 26-25.

Time was on Michigan’s side. The Panthers had all three of its timeouts remaining and had its running game firing on all cylinders. Marching their way down the field, the Panthers got to within the 5-yard line with 3 seconds to go when Fisher used his final timeout.

Going against the team’s momentum rushing the ball and against his philosophy all game, Fisher sent his inexperienced kicking team out to win the game from 21-yards out. Carrizosa, who attempted two field goals in his freshman year at San Jose State and missed both of them, kicked the ball off the left upright, ending a heartbreaking loss for the Panthers and bringing the team’s record to 1-3.

Cookus was happy to win in his first professional start but felt that the team could have done much better and not let the game come down to an opponent’s missed field goal at the very end.

“You hate to win a game that way when it’s in their hands,” Cookus said. “Obviously it’s great to win the game, first career win for me, everything like that. You kind of hate to see it because I feel like we left some things on the table there and we kind of wanted that game back a little bit. We felt like we kind of kept them in the game.”

The Stars improved to 2-2 on the season off the performance from Cookus, who completed 22-of-30 passes for 190 yards with 2 touchdowns and an interception.

In his first start since NAU’s 2019 Senior Day loss to Idaho in overtime, Cookus showed that he can make the right plays when needed and make stuff happen with his legs, an aspect of his game that is very underrated.

In that Senior Day game, Cookus ran for 71 yards on seven attempts. In the nearly three years since that start, Case has quite literally not missed a step. While Scott continues to nurse his injury, which Andrus said will have him out for an estimated three weeks, Cookus looks to be the answer the Stars were looking for as they make a push for the playoffs this summer.

Former Northern Arizona University quarterback Jeff Godfrey won his first professional start on Saturday in the United States Football League. Need to check this write my lab report and get more new things about education. Godfrey threw for 195 yards and four touchdowns in the Jacksonville Sharks' 51-48 win over the New Orleans VooDoo.