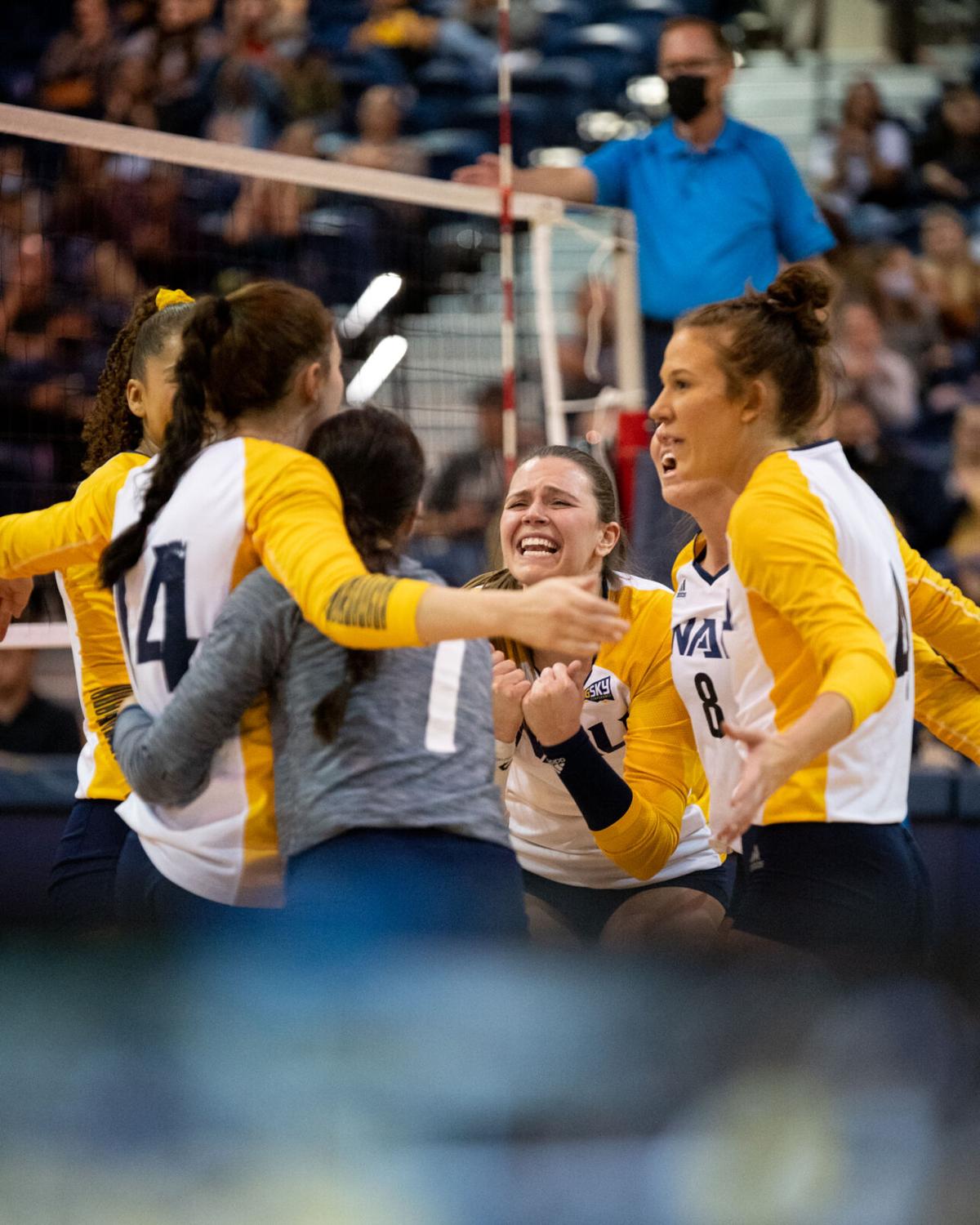 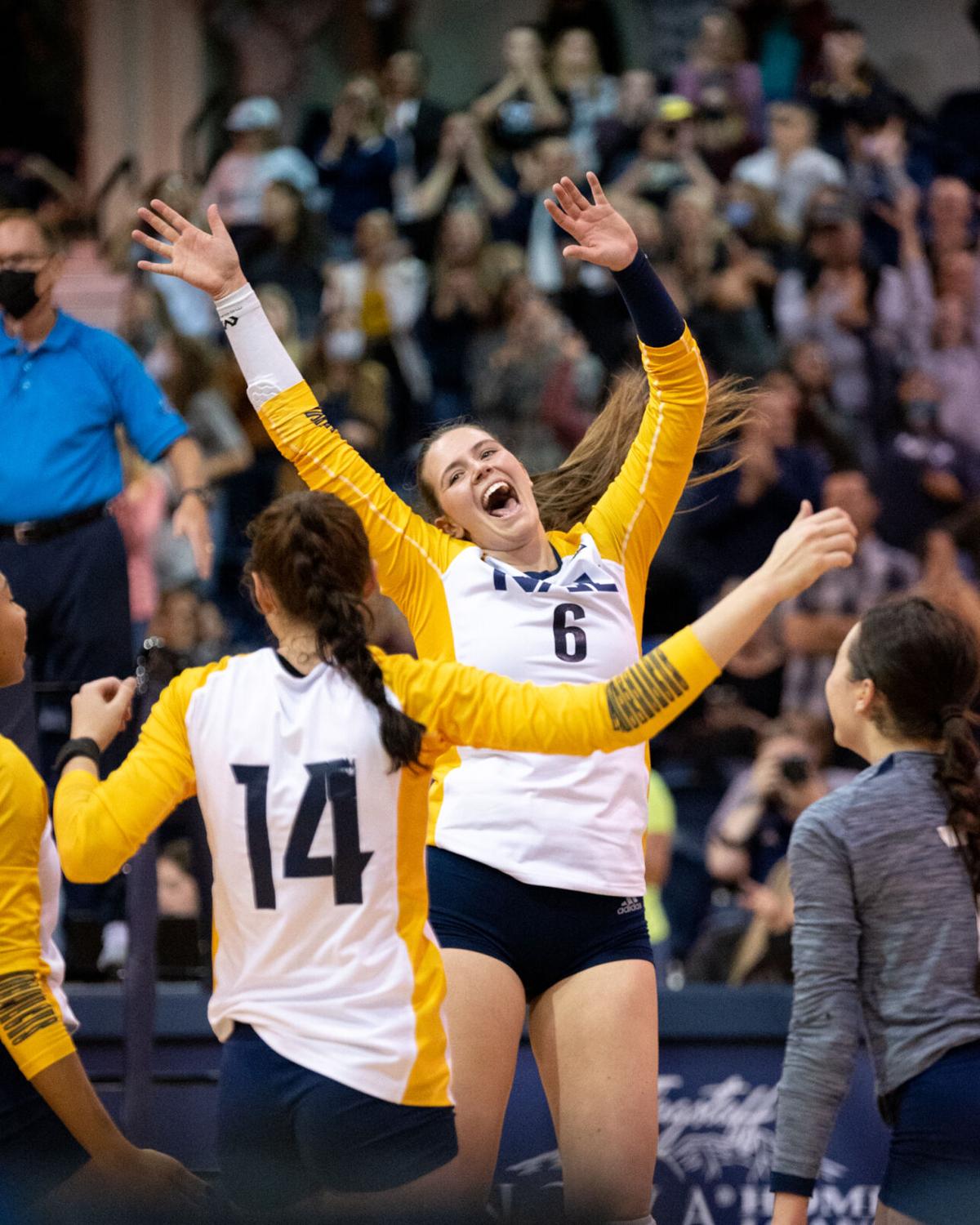 Senior opposite hitter Ryann Davis (6) celebrates with the Lumberjacks after scoring a point against Sacramento State, Nov. 6. 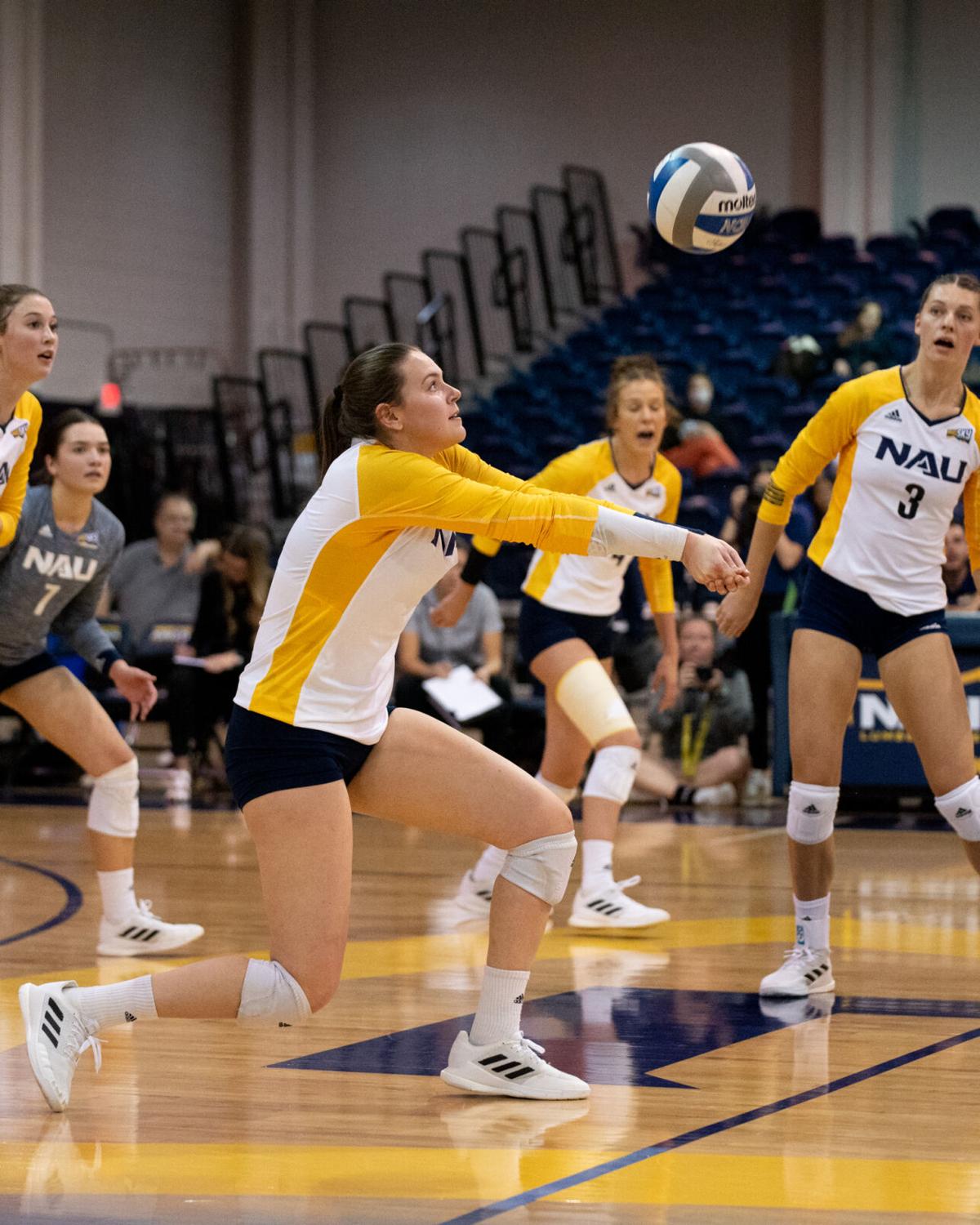 Senior opposite hitter Ryann Davis (6) bumps the ball to set up a play, Nov. 6. 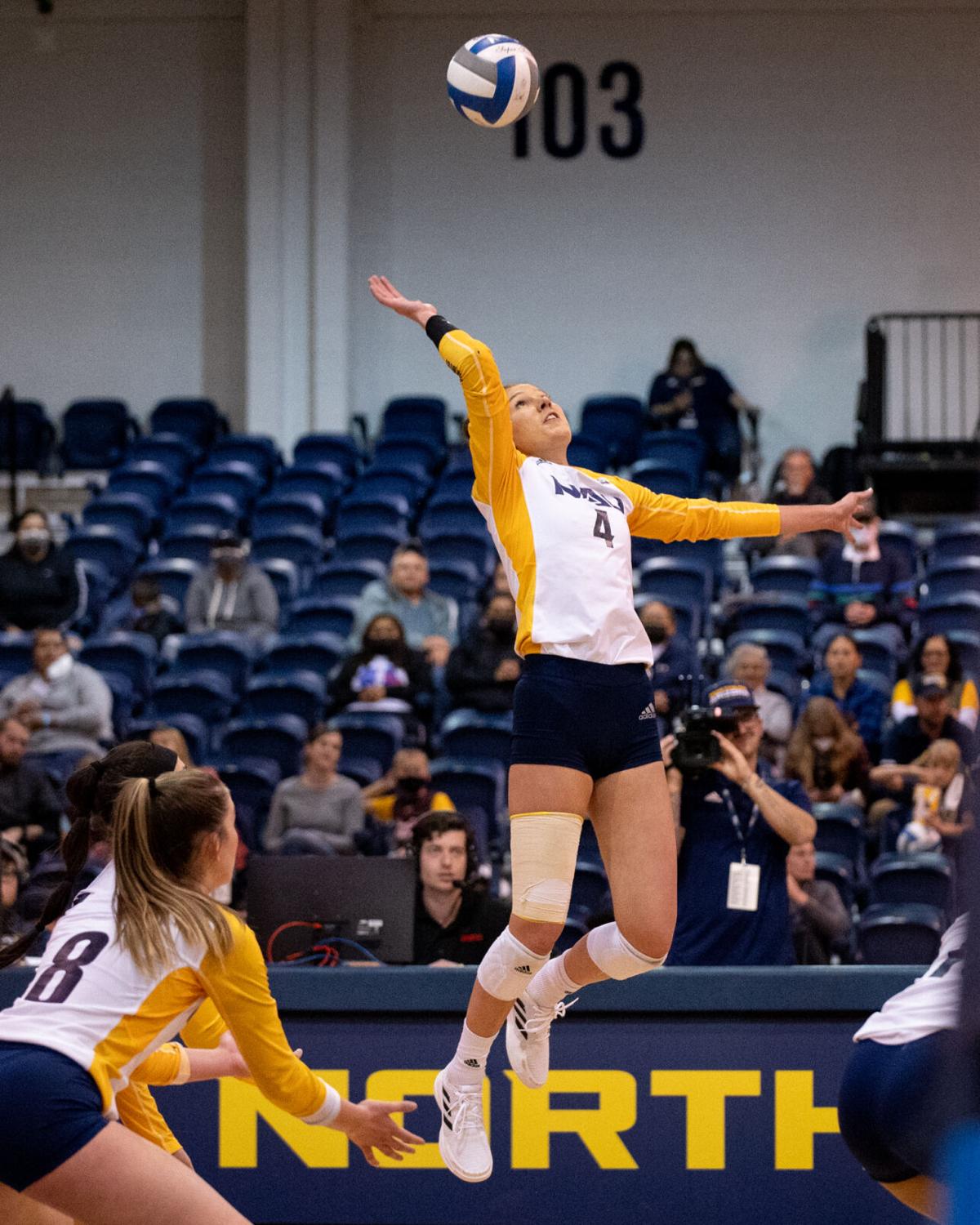 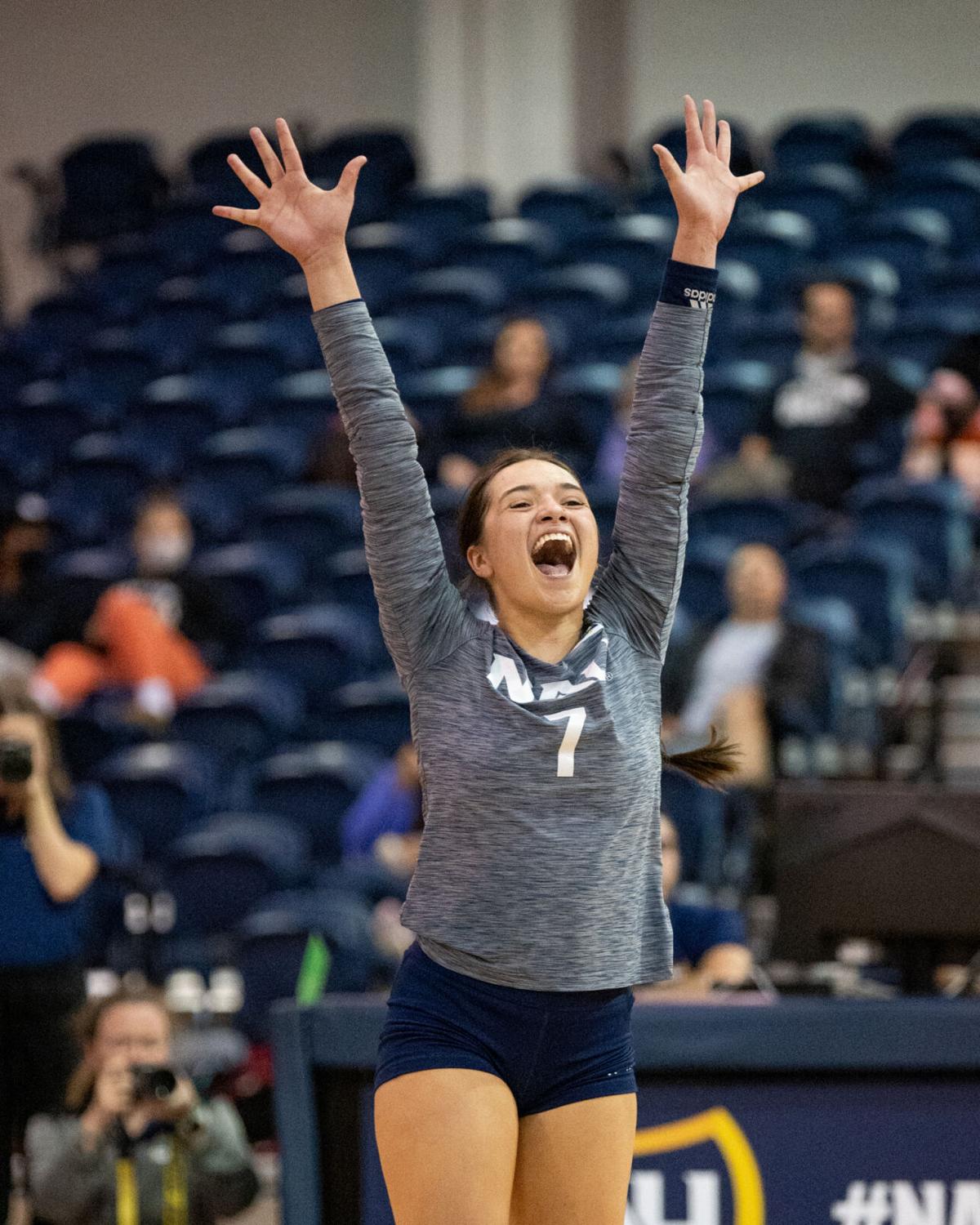 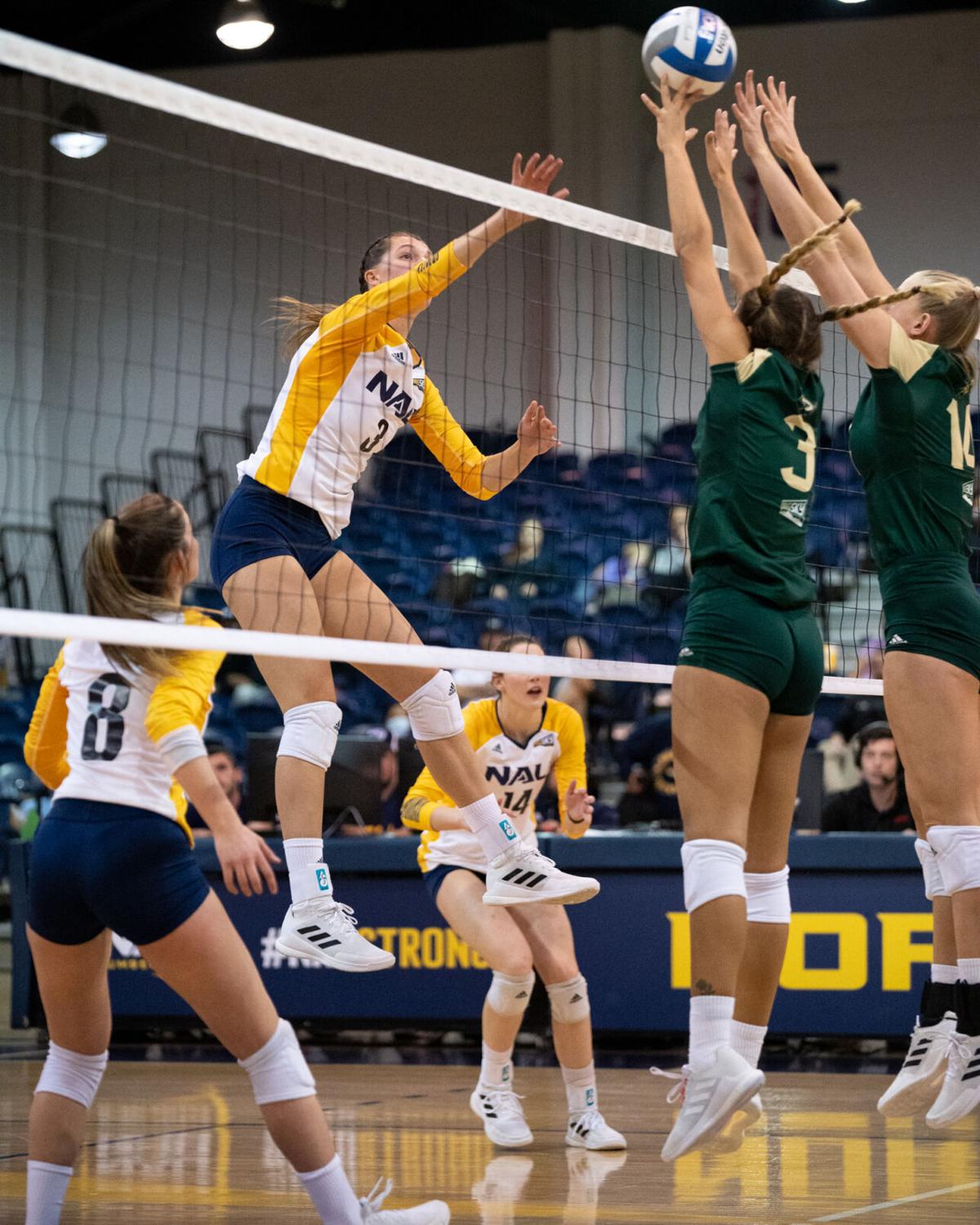 Senior opposite hitter Ryann Davis (6) celebrates with the Lumberjacks after scoring a point against Sacramento State, Nov. 6.

Senior opposite hitter Ryann Davis (6) bumps the ball to set up a play, Nov. 6.

NAU volleyball had to overcome fierce Sacramento State resistance in a 3-0 victory Nov. 6 at Rolle Activity Center. The Hornets put together a lot of runs at crucial points, but the Lumberjacks were always up to the task and never looked to be out of the driver’s seat. The win saw NAU jump ahead of the Hornets in the Big Sky standings.

This contest was a potential first-round preview of the Big Sky Tournament. NAU needed to stop a Sacramento State team that had been on a tear entering the matchup — having won six-straight games compared to the Lumberjacks’ two. However, NAU could look to its previous matchup with the Hornets, which ended in a Lumberjack 3-0 sweep, for confidence.

Sacramento State’s hot streak carried into the early phases of the first set, jumping out to a 5-1 lead, but the Lumberjacks were not deterred as they fought their way back to within one, 7-6. Senior opposite hitter Ryann Davis and junior middle blocker Neche Newton were a brick wall that gave the Hornets as much as they could handle, combining for eight blocks in the opening set. Still, the set went back and forth.

“We’ve been connecting really well this season,” Davis said of her relationship with Newton. “We’ve really been working on and practicing closing that block and being sealed every time.”

NAU eventually took control for a 25-20 win, closing the set emphatically with a Newton block.

The two teams fought to find an upper hand early in the second set but, once again, Sacramento State pulled ahead, going on a 4-0 run — and taking an 8-4 lead — before the Lumberjacks answered with four consecutive points of their own. NAU capitalized on this momentum and did not give up the lead after securing it, 10-9. Despite a run from the Hornets to try to salvage the set, the Lumberjacks put themselves in position to win 25-20 in set two.

NAU jumped out to an early lead in the third set, not wanting to give the Hornets an opportunity to get back in the game. Although the Hornets battled every point, the Lumberjacks looked dominant. Sacramento State kept it close, but could not overcome the early deficit. NAU walked away with another victory, 25-20.

“We’ve been winning all year and I think we’re peaking at the right time,” head coach Ken Murphy said. “I think if we play like we did tonight next weekend, I feel good going into the conference tournament.”

With this win, the Lumberjacks jumped the Hornets in the Big Sky standings, moving into fifth place. NAU will travel to Ogden, Utah and Pocatello, Idaho to finish the season, having already clinched a Big Sky tournament berth.