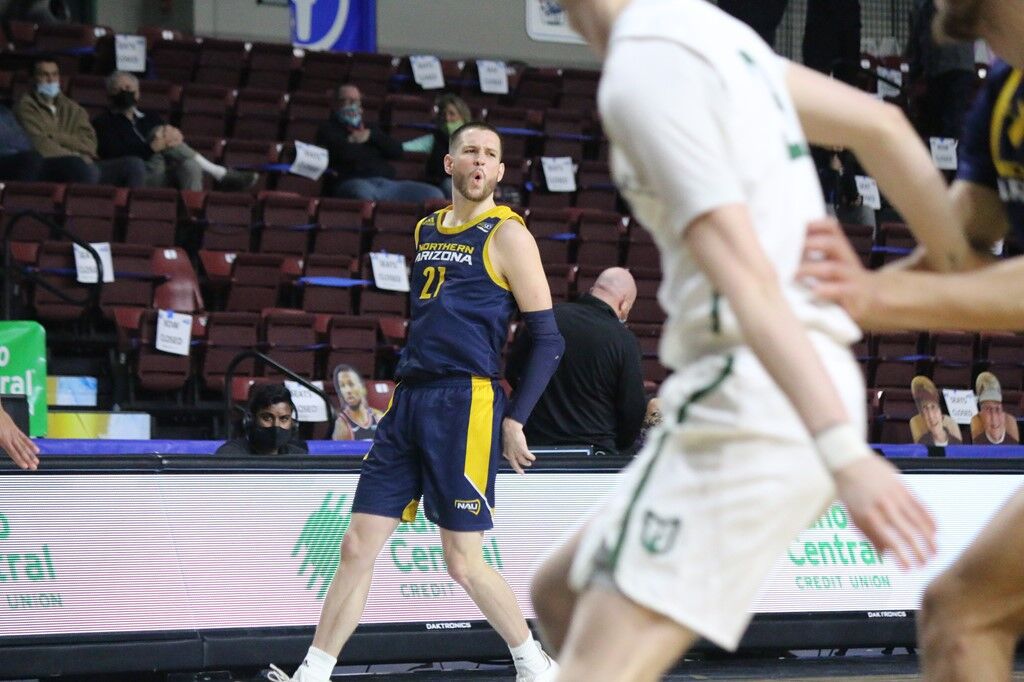 Redshirt junior guard Luke Avdalovic in the midst of a career game in the first round of the 2021 Big Sky Conference Tournament against No. 7-seeded Portland State, March 10. 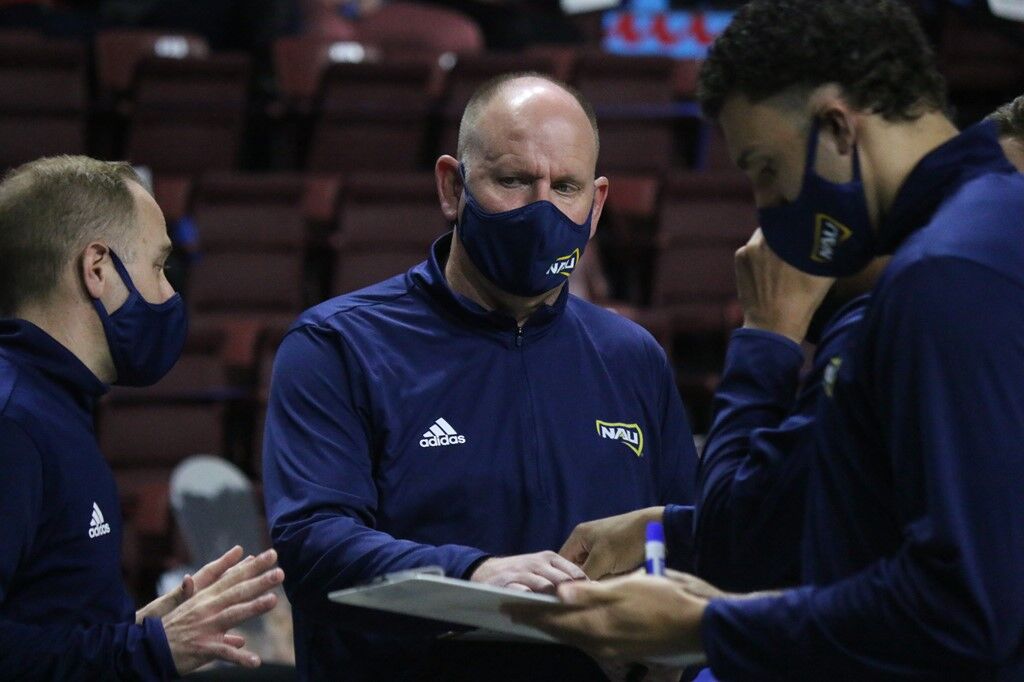 NAU head coach Shane Burcar drawing up a play with players and his coaching staff in quarterfinals of Big Sky Conference Tournament against Eastern Washington, March 11. 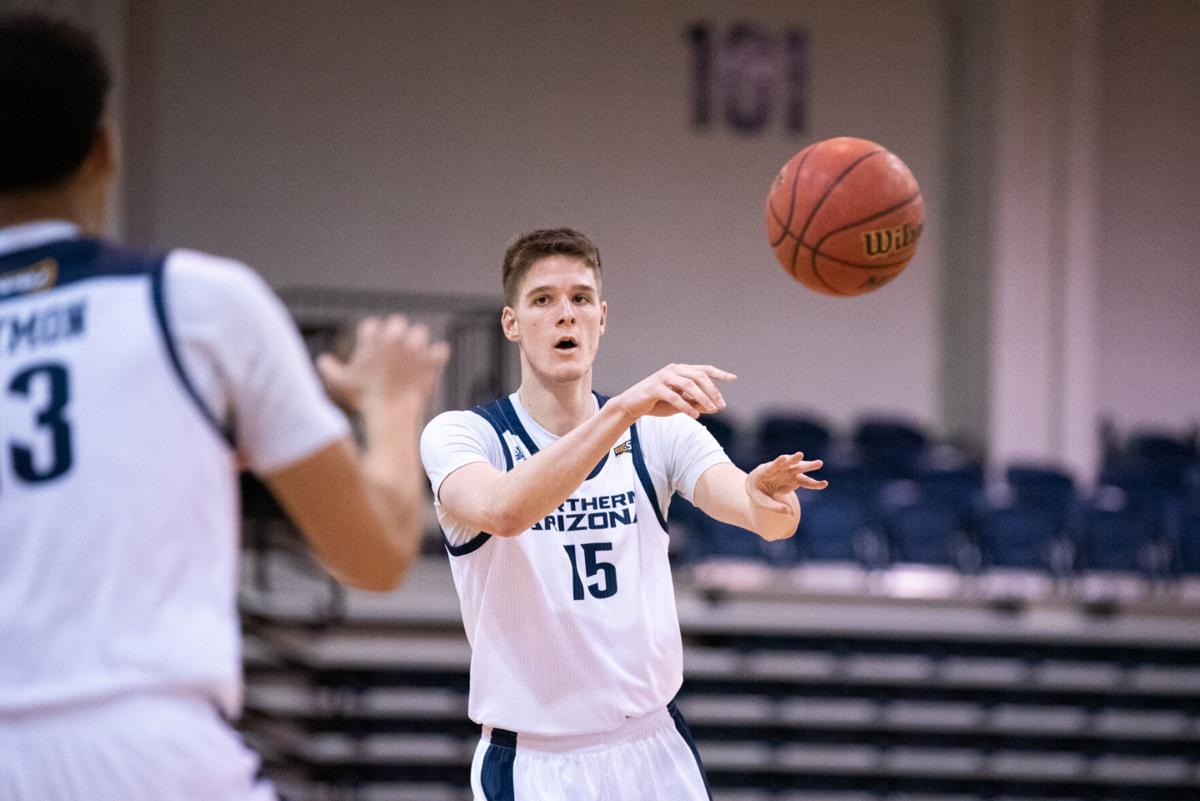 Redshirt junior guard Luke Avdalovic in the midst of a career game in the first round of the 2021 Big Sky Conference Tournament against No. 7-seeded Portland State, March 10.

NAU head coach Shane Burcar drawing up a play with players and his coaching staff in quarterfinals of Big Sky Conference Tournament against Eastern Washington, March 11.

This was the length of the two COVID-19 pauses that plagued NAU men’s basketball this season.

The start of NAU’s season was delayed by 12 days due to positive cases within the program. This further complicated the preparation for the 2020-21 season, which was already hindered due to NCAA restrictions for in-person practices.

“This summer, we were restricted with COVID, couldn’t work out as much as we wanted to with the newcomers coming in, so we lost a lot of time with that with a young team,” NAU head coach Shane Burcar said. “[We] played Arizona with two and a half days of practice, which is not an ideal situation for any team.”

NAU’s season did not begin until Dec. 7 when they lost 96-53 at UArizona. Their rough start continued with a 0-5 record before picking up their first win on Dec. 22 against the Denver Pioneers.

On Jan. 29, NAU picked up a crucial win over the Northern Colorado Bears, 68-64. However, COVID-19 struck once again, forcing NAU to go on another pause that lasted 19 days. This forced teammates to be away from one another and the coaching staff to coach and mentor their players virtually.

“[Coaches were] making sure we were doing our workouts, doing our conditioning off the court so we’re ready when we came back to work through that period we had off,” redshirt freshman forward Carson Towt said.

His teammates also talked about how the team was still really close, even in the wake of games being canceled in this crazy season.

“It’s the closest group of guys that we have ever had as a team,” redshirt junior forward Nik Mains said. “The coaches are always checking in on us and checking in to see how we are doing, making sure everything is okay. If we needed anything, they would be there for us.”

After the pause, NAU lost its last four regular season games heading into the Big Sky Tournament in Boise, Idaho. However, with a week off, NAU had a string of 10 practices in a row, allowing them to develop chemistry and prepare for the postseason despite a lackluster 5-15 record.

His players had the same sentiment when it came to building a winning culture.

“I think he [Burcar] has a huge competitive spirit that he tries to instill in all of us and everyone he recruits has what he has,” Towt said. “He recruits winners. He is a winner, he has won his whole life. He knows how to win.”

This spirit and chemistry propelled the No. 10-seeded Lumberjacks to a huge 77-66 win over the No. 7-seeded Portland State Vikings in the first round, NAU’s first win in the Big Sky Tournament since 2015.

“I don’t think a lot of people expected us to come out and beat them and get out of the first round, since we haven’t done that at NAU in quite some time,” redshirt junior guard Cameron Shelton said. “We believed we could begin to change this program and continue to turn the program around, even though we haven’t had the type of success we wanted during the regular season.”

NAU lost to the Eastern Washington Eagles in the quarterfinals, 66-60, in a hard-fought game. Eastern Washington went on to win the Big Sky Tournament, defeating the University of Montana and Montana State in the semifinals and championship game by double-digit points.

The fact NAU won in the tournament was huge for the program, rebounding from a disappointing loss in the first round of the tournament against Idaho State a year ago.

“Last year, I said when we lost to Idaho State that it was a necessary evil,” Burcar said. “This year, to get that momentum into our 2021-22 season, I thought it was important for our guys to get that feeling of winning in that tournament.”

“You don’t want to play in that first game now,” Burcar said. “It would be nice to get up there with a first-round bye next year and understand you win that game. Now you’re in the semifinals of the Big Sky Tournament.”

NAU finished with a 6-16 record overall with a 4-10 mark in conference play. Shelton averaged 19.2 points per game, leading the team throughout this tumultuous season.

“The best thing I took away from this season was being able to spend time with this unique group of guys and build relationships with the guys we had on this team,” Shelton said.

Even with Shelton and redshirt junior guard Luke Avdalovic entering the transfer portal as graduate transfers, they left their mark on this program, putting NAU in a promising position moving forward.

“Luke [Avdalovic] and Cam [Shelton], who put up great numbers, left us in a great spot and we wish them well,” Burcar said.

With the lack of a true offseason and without fans, this was a challenging season for the Lumberjacks. However, Burcar says that this offseason he can use it to build the program to new heights and reengage in the community.

“We couldn’t build any momentum with our fan base, with our community,” Burcar said. “That stuff really hurts you when you are trying to build a program. We look forward to this offseason and moving forward, we are excited about the guys that we are recruiting. Hopefully we can have some camps in the summer to build our community, especially the youth of Flagstaff and those that are interested in NAU, and also get recruits back on campus and the performance center being built.”

NAU defeating Portland State in the Big Sky Tournament was huge for the program and with a full offseason to work with, there is reason for optimism for NAU men’s basketball moving forward.