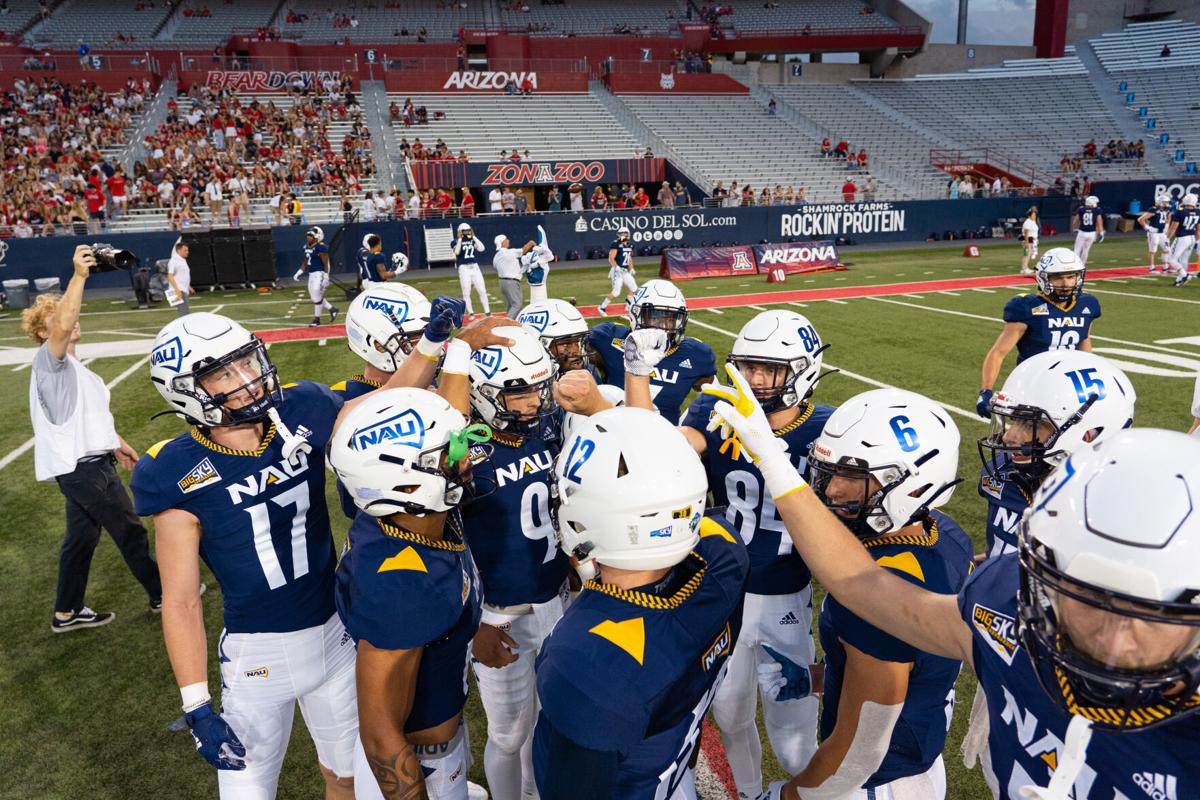 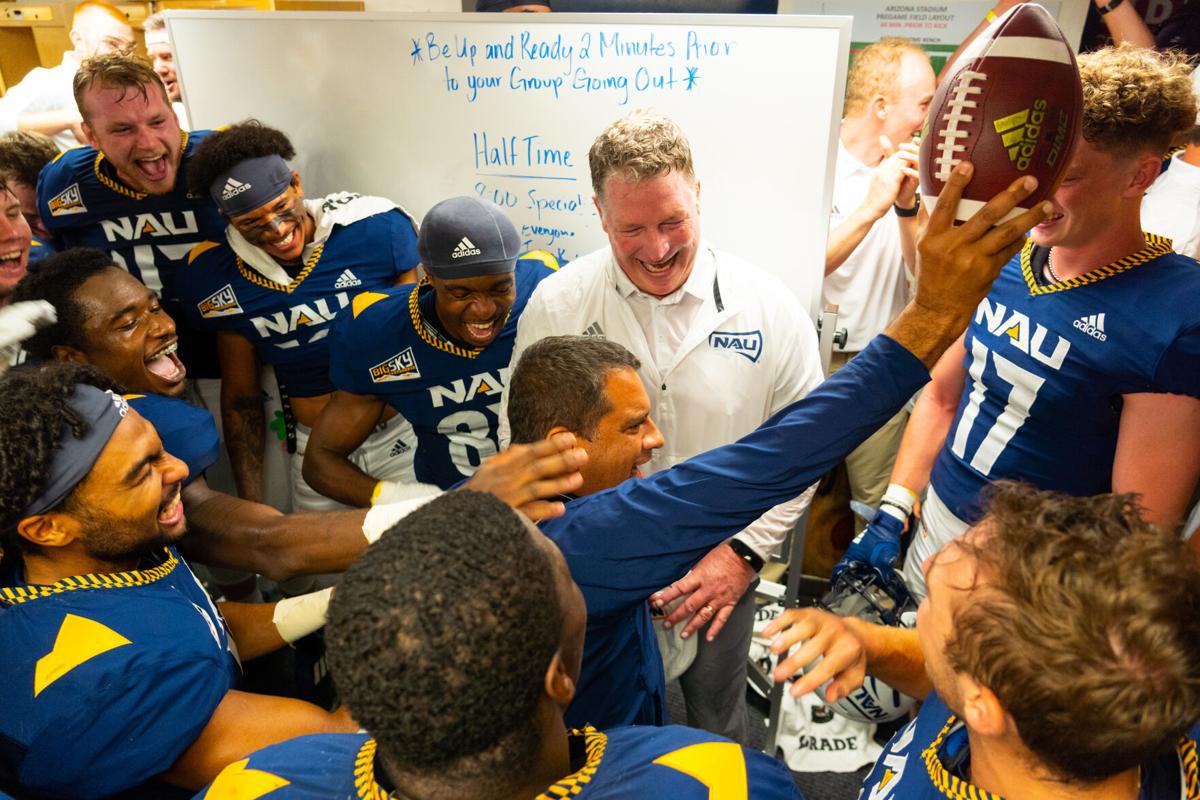 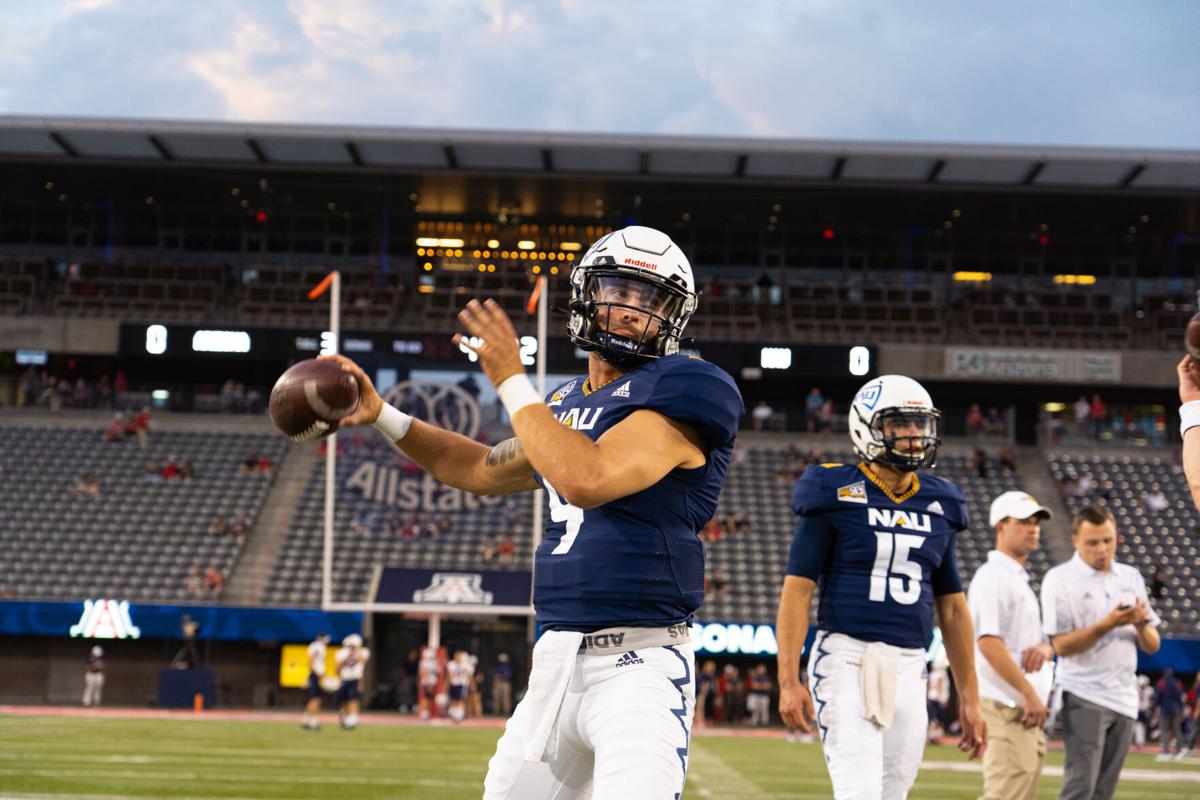 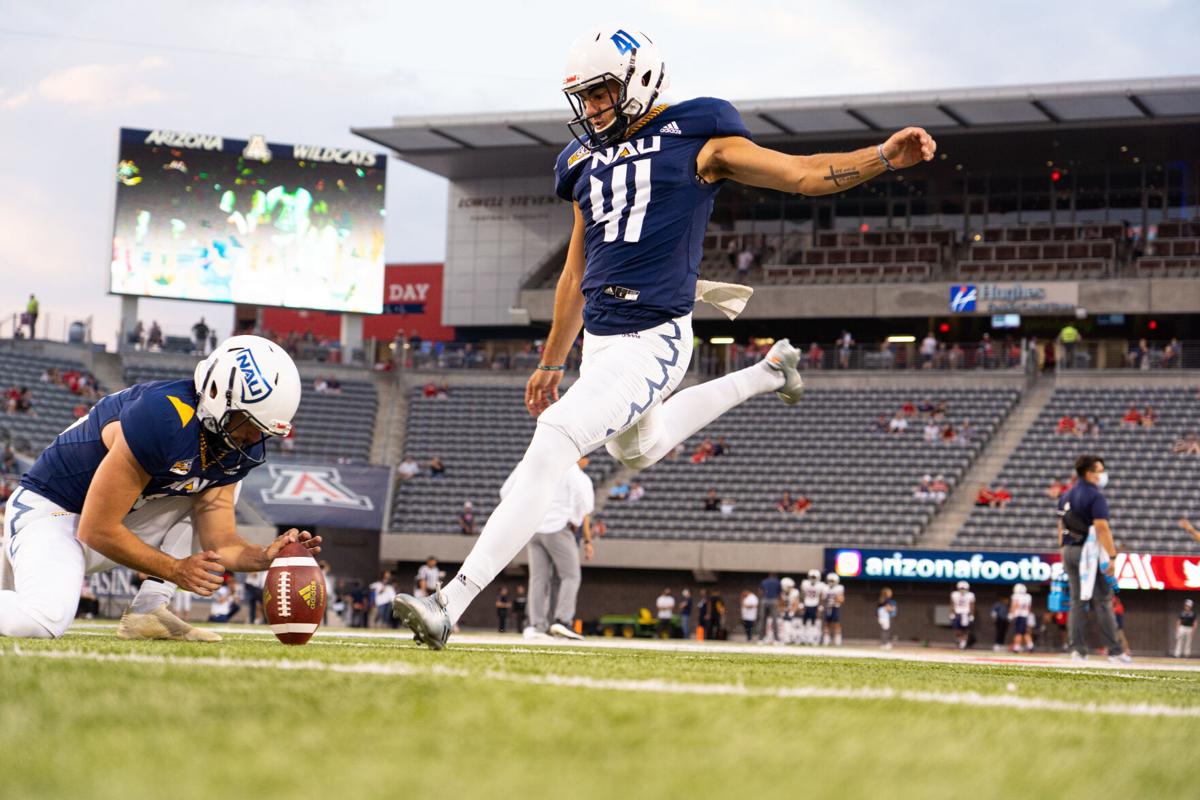 In the middle of NAU’s longest road trip in over a decade, the Lumberjacks took I-17 and I-10 down to Tucson to take on the Arizona Wildcats. Both teams came in looking for their first win of the season on Sept. 18. That’s exactly what NAU got, with a groundbreaking 21-19 win.

UArizona’s stretch of losses continues to run longer than just this year, however, as the team went 0-5 last season and finished the 2019 season with seven consecutive losses. The Wildcats last experienced the taste of victory against Colorado in a 35-30 shootout on Oct. 5, 2019.

The historic rivalry between these two Arizona schools runs deep. The Wildcats were 15-1 all time against the Lumberjacks, with the most recent game coming on Sept 7, 2019, when they won 65-41. That victory started a four-game win streak for  UArizona.

During the first half, rainy weather blew in and out, turning this matchup into a defensive battle. Both teams had three-and-outs on their first drives. NAU freshman quarterback Jeff Widener, fresh off his first career start last week, once again opened for the Lumberjacks. With Keondre Wudtee still out with the ankle injury he sustained against Sam Houston State, the expectation was that Widener would once again play a majority of the game. However, Widener’s interception showed turnovers were once again an issue.

UArizona got off to a quick start in the first quarter thanks to a 31-yard field goal by senior Lucas Havrisik and a touchdown pass from freshman quarterback Will Plummer to sophomore wide receiver Boobie Curry.

After another Havrisik field goal, this time from 24 yards, NAU made the surprising move to bench Widener in favor of freshman quarterback RJ Martinez. on its first drive of the second quarter. The true freshman out of Austin, Texas had a record-setting career at Westwood High School. In his first career appearance, Martinez completed 11-of-16 passes for 88 yards, a touchdown and an interception. That interception in the end zone was picked off by sophomore cornerback Christian Roland-Wallace on a pass intended for sophomore wide receiver Hendrix Johnson.

The freshman quarterback also showed his prowess in the run game by finishing with 43 yards on only six attempts.

The move came after Widener had thrown four passes with one completion and an interception, but it proved to be the right choice in the end.

Martinez showed a lot of promise in his first outing, while also committing some mistakes expected of a freshman thrown into a game. As the game progressed, Martinez learned how to keep his body safe, especially on the run. His first big play was an 18-yard run that culminated in a forced fumble by senior linebacker Anthony Pandy that was recovered by NAU freshman running back Kevin Daniels.

With a new quarterback and a 13-point deficit, NAU looked to have already lost momentum halfway into the second quarter. That all changed with 1:28 left in the half when Plummer, deep in his team’s territory, threw the ball right at freshman defensive back Brady Shough, who returned it 28 yards for a touchdown.

Daniels was NAU’s main option on the ground, rushing for a career-high 109 yards on 27 attempts. In addition to scoring a 12-yard touchdown run in the third quarter, graduate student Luis Aguilar’s PAT putting NAU ahead 14-13.

During the halftime break, Ball and offensive coordinator Aaron Pflugrad discussed who to put behind center to start the second half. Ball said Pflugrad stuck with the plan to bring in Martinez, and said he gave NAU the best chance to win.

Martinez’s performance now begs the question of what NAU’s quarterback situation looks like going forward. With the move to substitute Martinez being as calculated as it was, what could the Lumberjacks pull next? Ball remained tight-lipped on that issue — for now.

Coming out of halftime, the momentum continued to swing rapidly for the Lumberjacks due, in large part, to mental mistakes from the Wildcats. On UArizona’s first drive, freshman running back Jalen John ran for 37 yards. However, that possession ended on another UArizona turnover — this time on downs — to give the ball back to NAU.

Redshirt senior defensive lineman Mo Diallo was penalized and ejected for a hard hit on Martinez. He wouldn’t be the only Wildcat to hit the showers early; about six minutes after Diallo’s ejection, sophomore safety Jaxen Turner was also dealt a massive targeting call that sent flags flying everywhere from referees.

“It’s hard to figure out,” Ball said about the targeting penalty that has played a role in all three of NAU’s games so far. “Harrison [Beemiller] experienced that in the first week we played.”

The targeting call allowed NAU to advance 15 yards, and it also left the Wildcat defense thin in the front and back. Daniels only needed three rushes to give NAU its first lead of the season.

UArizona could not find a way to close out its drive until it was too late. In the end, turnovers continued to plague the team when Plummer threw another interception, this time caught by freshman defensive back Devontae Ingram, who managed to keep a foot in bounds and give the Lumberjacks possession.

After five minutes, 10 plays and 60 yards, NAU extended its lead when Martinez connected on his first collegiate touchdown pass — a 9-yard completion to Johnson. With the Lumberjacks leading 21-13, more back-and-forth possessions ensued. The Wildcats had four and a half minutes to score eight points and tie the game.

UArizona head coach Jedd Fisch elected to take a new approach, as well, by putting sophomore quarterback Jordan McCloud in during the fourth quarter. As quarterback for most of the game, Plummer went 19-for-34 with 191 yards, a touchdown pass and two interceptions.

Much like Martinez was for NAU, McCloud provided a huge spark for the Wildcats. After his first pass attempt was broken up by sophomore defensive back Jacob Mpungi, he completed his next six attempts and ended with a 3-yard touchdown pass to Curry. Now, the score was 21-19.

The Wildcats needed to convert a two-point conversion in order to tie the game and, on the pivotal play, McCloud’a pass was well short of the intended receiver. An onside kick recovered by NAU wide receiver Jamal Glaspie and a first down run from Daniels — a carry that put him over 100 yards rushing — sealed the deal on a historic victory. The only other time NAU beat UArizona was Oct. 29, 1932, when the Lumberjacks won by a score of 7-6 in Phoenix, despite being the fewest number of combined points ever scored in this rivalry’s history.

NAU, now 1-2, will look to ride the momentum from this win and reach .500 against Northern Colorado, which fell to 1-2 after a loss to Lamar on Saturday. The two will meet for their first conference game of the season next Saturday at noon in Greeley, Colorado. Meanwhile, UArizona’s losing streak reached 15 games, and its next game will not be easy — the Wildcats open their PAC-12 schedule against the No. 3-ranked Oregon at 7:30 p.m. Sept. 25 at Autzen Stadium in Eugene, Oregon.