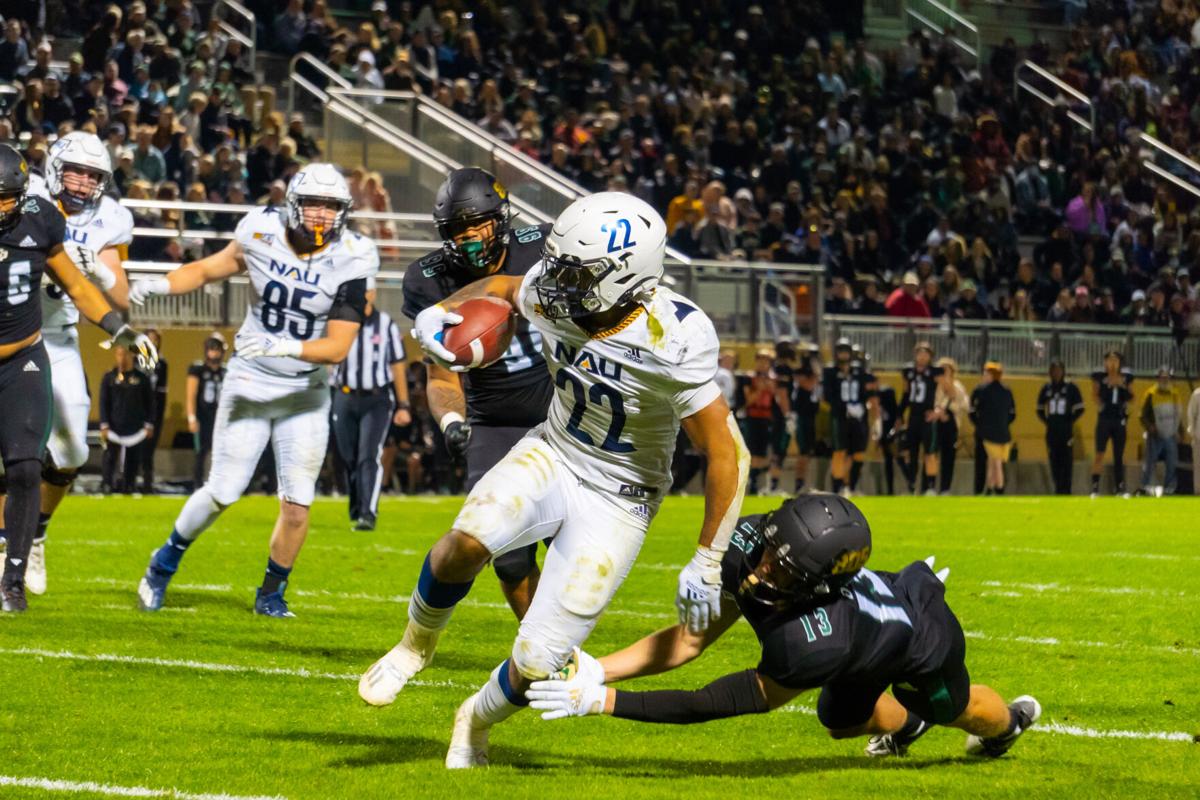 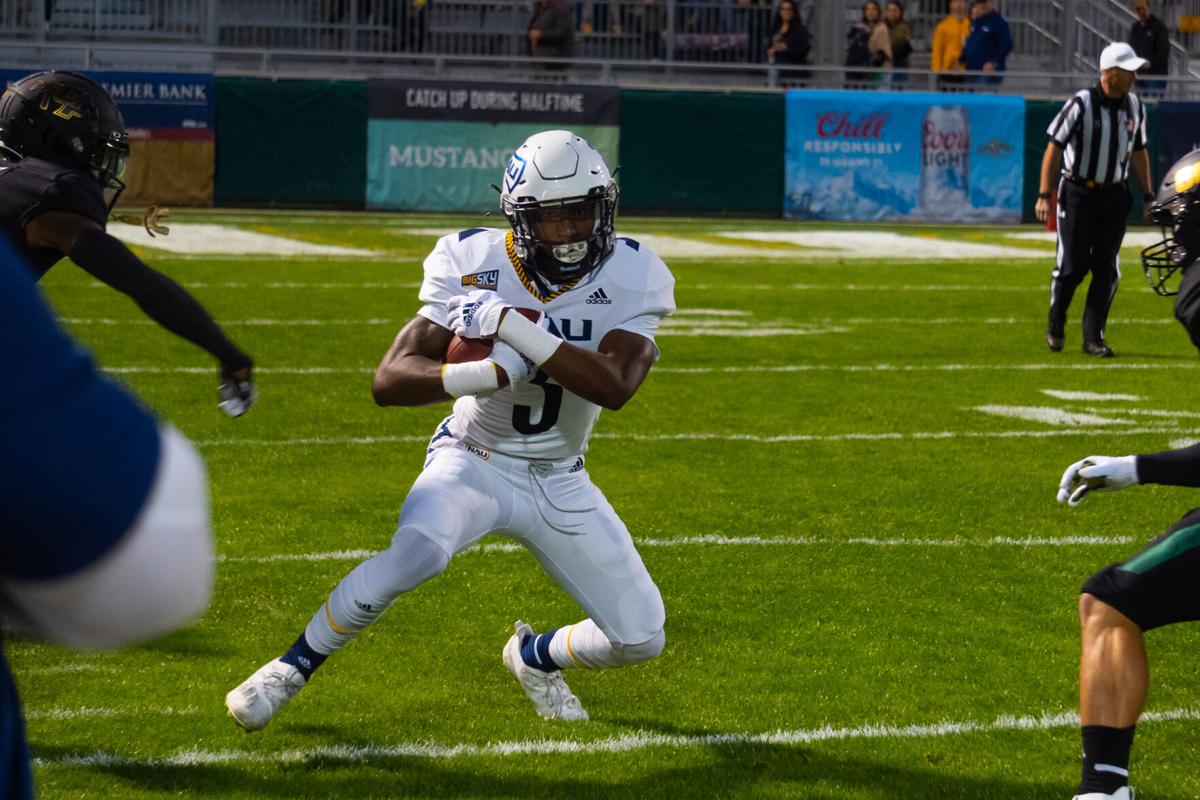 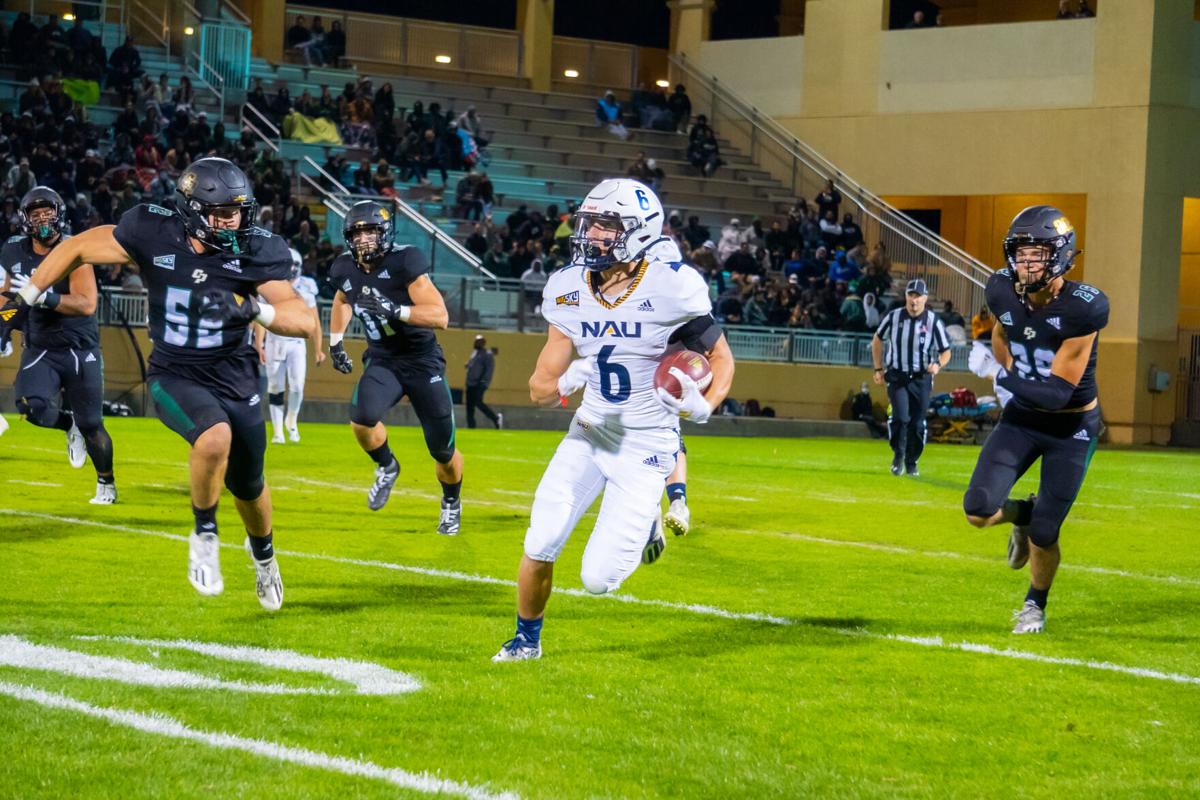 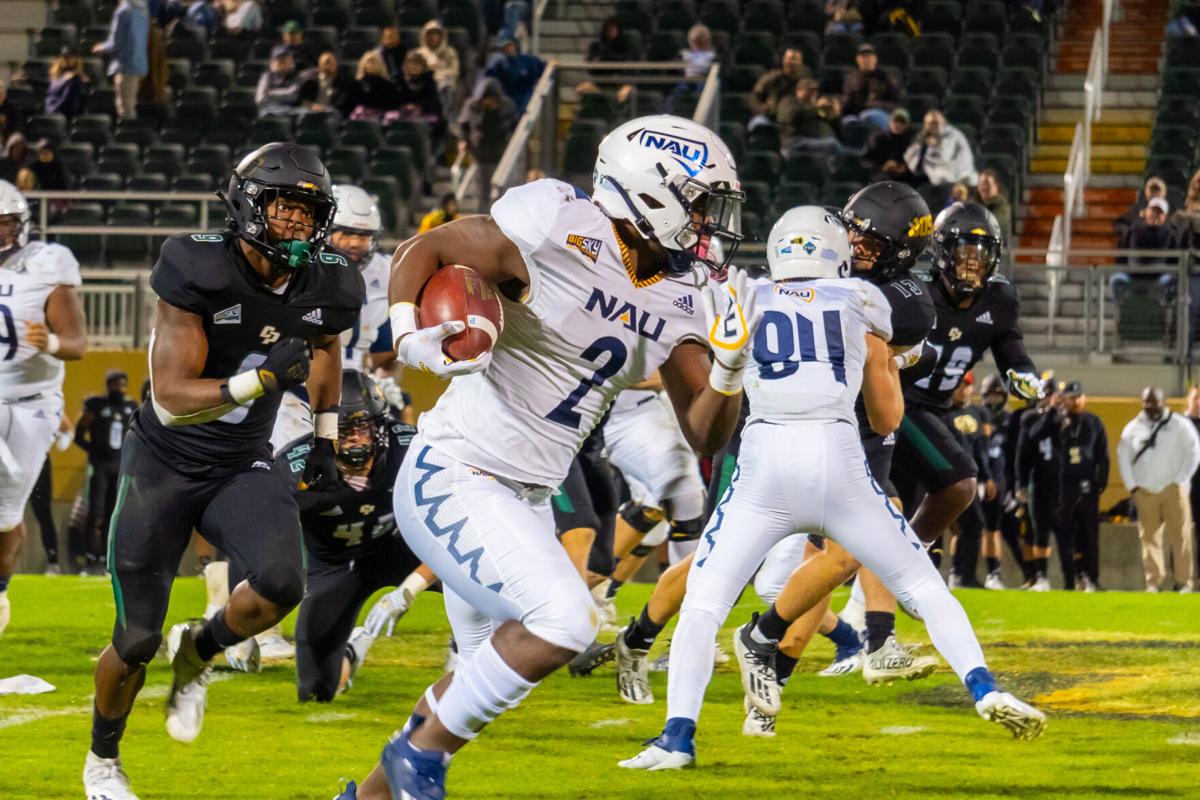 In the final game of the Big Sky Football season, NAU football came to Alex G. Spanos Stadium and rained down a chilly beatdown of the Cal Poly Mustangs, 45-21.

Not only was this the final game of the season for both teams, but it was also the stadium’s final competition on a natural grass surface. Starting next season, Cal Poly is switching to turf. Alex G. Spanos Stadium was the only remaining Big Sky venue to have grass instead of turf, making it the final grass game in the conference’s history for at least the foreseeable future.

Cal Poly’s Senior Day game opened slowly, with both teams trading three and outs and punting the ball back and forth. The Lumberjacks, who received the ball first, punted the ball on their first three possessions, while the Mustangs punted on their first two.

On NAU’s first possession, freshman quarterback RJ Martinez came out on the field to lead the Lumberjacks. The first-year quarterback out of Austin, Texas suffered a knee injury in the loss against UC Davis two weeks ago and was out against Montana last week. It was unknown until the moment he stepped on the field that he would be available to play.

“We didn’t really know if he was going to be 100% until probably mid-week,” head coach Chris Ball said. “He had a really good Friday practice and felt that he could go, so we gave him the opportunity to go.”

Martinez had a solid day behind center in the final game of his freshman season. He completed 11 of 22 passes for 167 yards and one touchdown.

The Lumberjack passing game was given a lot of support on the ground. Freshman running back Kevin Daniels had himself another career-defining game.

Coming in, Daniels needed 134 yards to become NAU’s first 1,000-yard rusher since Casey Jahn in 2015, but he crushed that threshold and got 204 of his 280 rushing yards by halftime alone. He finished the season with 1,146 rushing yards, the 10th most by a NAU player in a single season.

The accolades kept coming for Daniels, as his 280 rushing yards were the sixth-most in a single game by a Lumberjack, just one shy of NAU Hall of Fame running back Archie Amerson’s 281-yard rushing game against Weber State in 1996.

Daniels, who sat during the fourth quarter, fell 42 yards shy of the all-time NAU single-season rushing record currently owned by Jim Smith, who rushed for 322 yards against Cal State Northridge in 1973.

“The whole thing was to keep him healthy,” Ball said. “We didn’t want to get him hurt or anything there at the end. We didn’t know he needed 42 yards until after the game.”

However, Ball added that if he knew about the record, he was unsure of keeping Daniels in to potentially beat it.

Hall led the Mustangs in rushing with 82 rushing yards on just seven attempts.

Cal Poly opened the scoring on the ninth play of the drive, when redshirt senior Lepi Lataimua jumped over the defensive line and flipped into the endzone for a one-yard rushing touchdown.

NAU only trailed for 29 seconds and responded in the blink of an eye.

On the second play of the ensuing Lumberjack drive, Martinez found redshirt freshman wide receiver Coleman Owen on broken coverage. Owen ran it down the sideline unopposed for a 62-yard touchdown.

The Lumberjack defense held down the Mustangs from there on out, not giving up a touchdown until late in the fourth quarter when the game was essentially decided. NAU forced a turnover on downs the next possession, giving the ball to its offense at the start of the second quarter.

Daniels completed his first of four touchdowns with a three-yard score to give NAU the lead with 13:16 left in the first half — and the Lumberjacks never looked back.

On the first play of Cal Poly’s next possession, Brasch’s poor throw landed in the hands of redshirt junior defensive back Dy’Vine Wallace, who returned an interception to the Cal Poly 14-yard line. Two plays later, Daniels reached the endzone again on a 13-yard touchdown run.

In less than six minutes across two quarters, NAU turned a 7-0 deficit into a 21-7 advantage.

The offensive woes continued for Brasch with 9:20 left in the first half. He threw his second interception to redshirt junior defensive back Morgan Vest, who caught the ball at the NAU 25-yard line and returned it nearly half the length of the field to the Cal Poly 28-yard line.

On the upcoming drive, graduate kicker Luis Aguilar kicked his 45th and final career field goal from 40 yards out. Then, Brasch fumbled the ball on the next possession on a strip sack by freshman defensive lineman Sheldon Newton.

Brasch, a product of Higley High School in Gilbert, Arizona, struggled all night. He completed 18 of 43 passes for 161 yards, with three interceptions and five total turnovers.

Daniels continued to add to his rushing total, scoring on a 23-yard run on the first play of a drive with 2:30 left in the first half.

Through good use of time management, NAU got the ball back before the half ended. The defining moment of the game occurred on an astounding 90-yard touchdown run from Daniels, which marked his fourth touchdown of the day and officially put him over the 1,000-yard mark.

Furthermore, that run was the longest in NAU history, beating Allan Clark’s 87-yard run against Boise State in 1978.

“That was a goal of ours: To get a 1,000-yard rusher,” Ball said. “It was very important for us as a football program, for Kevin and our offensive lineman.”

After a third interception off Brasch, this time from freshman defensive back Colby Humphrey, NAU found one last opportunity to score before the half. Aguilar was sent out to hit a 53-yard field goal, but was about a yard short. Redshirt freshman defensive back Xavier Oliphant carried the ball from the back of the endzone on a 100-yard return for a touchdown.

The Lumberjacks scored 31 points in the second quarter, but Oliphant’s return — akin to the end of the 2013 Iron Bowl — cut the lead to 38-14 at halftime.

The second half began exactly as the first half did, with both teams punting the ball back and forth.

In the third quarter, the only scoring play was a 45-yard run from Daniels, his fifth and final touchdown on the night. This run got him to the 280-yard mark and was his last touch of the season.

With the game out of reach, both teams put in their backups to finish the game. NAU inserted freshman quarterback Niko Haen, who completed his only pass of four yards and ran for seven yards on two rushes.

Cal Poly scored the final points of the night when redshirt junior Chuby Dunu scored on a two-yard rush, his first touchdown for the Mustangs since 2017.

While the season is over for the Lumberjacks, Ball and the coaching staff’s work is far from over.

“We hit the road [the Monday] after Thanksgiving,” Ball said. "We’ll be … recruiting for the next three weeks.”

While neither NAU nor Cal Poly made the FCS Playoffs, the selection show that determines the bracket for the playoffs is Sunday at 10:30 a.m.

Sacramento State clinched the Big Sky Championship with its 24-7 win over UC Davis on Saturday and will automatically make the playoffs.

NAU will open the 2022 season on Sept. 3 at Sun Devil Stadium against ASU.