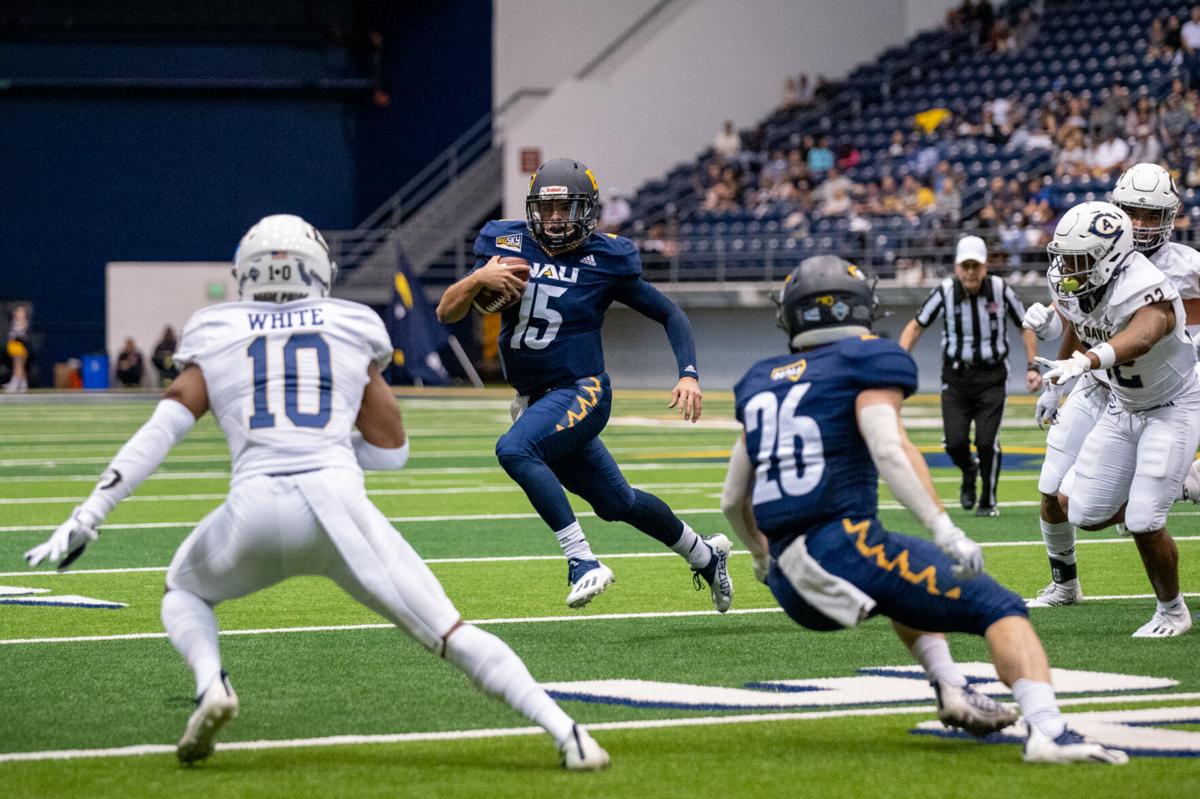 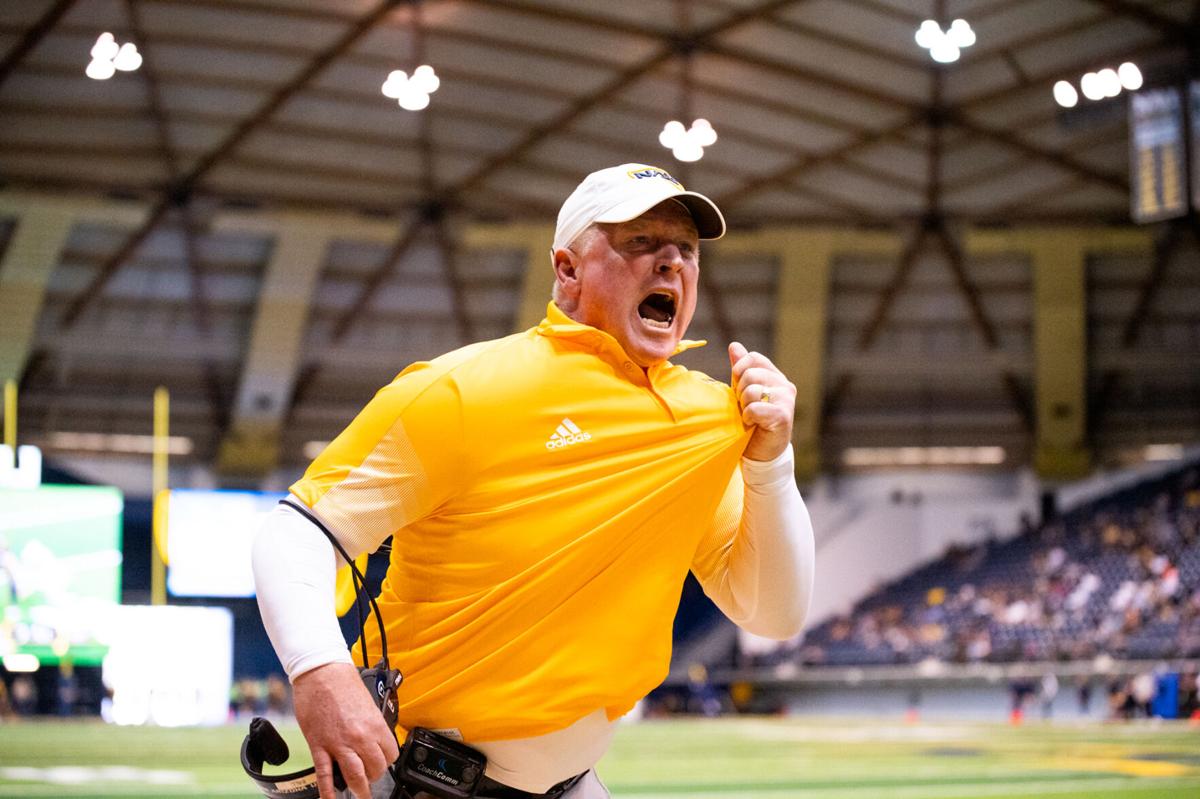 Head coach Chris Ball yells at the sideline referee about the Lumberjacks being held on offensive plays against UC Davis at the Walkup Skydome Nov. 6.

Head coach Chris Ball yells at the sideline referee about the Lumberjacks being held on offensive plays against UC Davis at the Walkup Skydome Nov. 6.

NAU dropped a home conference game on Saturday to UC Davis 40-24. The first half of the game was tight with a halftime score of 20-17 and UC Davis in the lead. All of NAU’s momentum tapered off in the second half as starting quarterback, freshman RJ Martinez, and his backup, redshirt freshman Jeff Widener were both knocked out of the game with knee injuries. NAU recorded one yard of total offense in the third quarter and UC Davis went on a 20-0 run, icing the game.

UC Davis opened the second half with possession and started to open up the ground game with its redshirt freshman quarterback Trent Tompkins, who specializes in the wildcat formation. After picking up a third and short, and with a fresh set of downs, Tompkins ran a read play that split the defense, allowing him to sprint up the middle untouched for a 54-yard touchdown. A minute and a half into the second half, UC Davis was up 27-17. That play would end up giving the winning points of the game with NAU only scoring a single touchdown in the second half.

Tompkins finished the game as the Aggies’ leading rusher, with 76 yards on only five carries with a touchdown.

UC Davis redshirt freshman quarterback Miles Hastings got his second career start on Saturday and made the most of it. Hastings finished the game completing 24 of 36 passes for 279 yards and two touchdowns.

The Lumberjacks’ quarterback room combined for just 177 yards and 1 touchdown through the air. Freshman running back Kevin Daniels finished the day under 100 yards rushing. The trend continues: if Daniels rushes for 100 yards then NAU wins, if he rushes for less than 100 yards, NAU loses.

Aggies junior running back Ulonzo Gilliam Jr. was held docile today on the ground — typically he is the main component of the UC Davis offense. Gilliam finished the game with 51 yards on the ground and another 28 in the receiving game, and he was held out of the endzone.

NAU opened the game with possession of the football and on the first play from scrimmage, Daniels was able to get around the edge on a toss play and burst upfield for a 31-yard gain, immediately putting NAU in UC Davis territory. Shortly after, Martinez was able to find freshman running back Draycen Hall deep down the right sideline for a 34-yard touchdown, giving NAU a 7-0 lead, barely two minutes into the game.

UC Davis came out with an effective passing attack on their first drive, Miles Hastings started the drive three of four passing and got the Aggies into the redzone on a 32-yard deep ball which was hauled in by the senior wide receiver Jared Harrell, who sat wide open in between NAU’s coverage.

However, the NAU defense was able to force a fourth and goal. UC Davis opted to keep their offense out on the field. Redshirt sophomore defensive back Johnathan Phenix was able to make a huge hit on the intended receiver in the endzone and knock the ball out, giving NAU possession backed up near their own goal line.

On fourth down with 7:49 remaining in the first quarter, while punting out of its own endzone, a holding penalty was called on NAU. By rule, the ball was ruled in the endzone during the hold and was, therefore, a safety. This not only gave UC Davis two points but possession of the ball as well.

UC Davis was able to quickly strike again, reaching into its bag of tricks and pulling the double pass, catching NAU off guard. Junior wide receiver Carson Crawford launched the ball deep down the left sideline finding his man, redshirt freshman running back Lan Larison, wide open for the 41-yard touchdown. The Aggies were stuffed attempting the two-point conversion, putting them up 8-7 with just over five minutes remaining in the first quarter.

NAU was able to cap off their next drive with a score after 11 plays, driving 75 yards, and converting on three third downs. The drive ended on a 12-yard touchdown scramble from Martinez, retaking the lead 14-8 with 35 seconds in the first quarter.

After forcing a three and out, NAU was driving back in possession of the football. On a third and long play, Aggies senior defensive lineman Bryce Rodgers was able to get to Martinez in the backfield, taking him down for a sack and forcing fourth down. Martinez landed on his knee and was injured on the play. He was not seen for the rest of the game.

Martinez ended the day seven of 10 passing for 90 yards and a touchdown. He added another 26 yards rushing and the touchdown on the ground as well. If he does have to miss time for the Lumberjacks it could be a massive toll for this offense which has benefited from the freshman quarterback’s tremendous plays and abilities.

On the first play of the ensuing UC Davis drive, Hastings found senior wide receiver Khris Vaughn deep downfield for a huge 54-yard gain. The completion immediately set up UC Davis with a first and goal. A second-down sack from freshman defensive lineman Sheldon Newton forced a long third and goal. Hastings' pass to the corner of the endzone fell incomplete on third and the Aggies were forced to settle for a field goal. With 8:44 remaining in the first half, the Aggies only trailed by three, 14-11.

On NAU’s next drive, redshirt freshman quarterback Jeff Widener took over after the Martinez injury. The Lumberjacks drove down the field and got into the redzone. Widener was one of two passing on the drive for 12 yards. He tacked on an additional 25 yards on the ground. On a third and long play, Widener looked to scramble, hurdling over one player before taking a shot and going down with an injury. He had to be helped off the field and NAU had to settle for a field goal, extending their lead to six, 17-11 with just over 5:30 left in the half.

UC Davis had no trouble moving the ball on their next drive. Starting backed up on their own 19-yard line, the Aggies drove 81 yards in 11 plays, capping off the drive with a 16-yard touchdown on a screen pass to sophomore wide receiver Justin Poerio. However, the Aggies missed the extra point leaving the score tied at 17.

The Aggies were able to get a quick three and out against NAU, getting back on offense with 57 seconds and a timeout. With the ball on its own 38, UC Davis relied on a quick passing attack to drive down the field, getting into the redzone — still with their timeout. NAU was able to come up with three big stops, forcing a fourth and goal and another field goal from UC Davis. The Aggies had the lead 20-17 at the half.

Once again, NAU’s pass defense was being exploited for big gains. Hastings finished the first half 16 of 24 passing for 220 yards and a touchdown. Including the trick pass from their receiver earlier in the half. UC Davis had 261 yards passing in the first half. NAU’s run defense had stepped up accordingly though, the Aggies only averaged 3.12 yards per carry in the first half, far under their 4.5 yards per carry season average.

Though NAU had started hot, the Aggies defense seemed prepared for what NAU threw at them towards the end of the half, especially with NAU’s top two quarterbacks dealing with injuries.

Graduate quarterback Keondre Wudtee started the second half for NAU. With Martinez and Widener both out of the game, NAU was struggling to get anything moving on offense and began the second half with back-to-back three and outs. Down by two possessions, it was essential that NAU found its rhythm on offense if they wanted to get back in the game with UC Davis maintaining their momentum from the first half.

“Any time you get down to your third or fourth-string quarterback, you’re very limited in what you can do,” said head coach Chris Ball. “We’ll have to look at the tape but I would have liked to run the ball better than we did.”

Pounding the ball on their next drive, UC Davis ran eight plays, all rushes picking up 39 yards and getting the Aggies into field goal range. On a 4th down and 5, junior kicker Isaiah Gomez put a 31-yard kick through the uprights to extend the Aggies lead to 13, 30-17 with 5:19 remaining in the third quarter.

NAU responded with yet another three and out. After their first three drives of the second half, the Lumberjacks had lost a total of one yard of total offense in the second half.

UC Davis showed no signs of slowing down on their next drive. The Aggies once again easily marched down the field led by Hastings throwing the ball exceptionally well. Hastings went 4 for 4 passing on the drive for 49 yards and a touchdown. UC Davis went up 37-17 with 2:43 left in the third quarter. By this point, most of the fans had already begun filtering out.

NAU gained two yards on their next drive before being forced to punt it back to UC Davis.

“Some plays I had to create, maybe I had some happy feet since it was my first action ever,” said Haen, “But I’m just really proud of the way the guys rallied behind me and had confidence in me, it just felt good to get out there.”

Haen went 4 of 4 passing on the drive for 51 yards, rushing for another 28 yards. The drive ended with freshman running back Tyson Grubbs finding the endzone on a four-yard carry. However, still down by 13 with 6:37 left in the game, NAU’s chances of a comeback seemed slim, especially with the clock becoming a factor.

NAU got the quick three and out it hoped for and with five minutes left in the game, was back on offense with Haen at the helm. Haen took sacks on first, third, and fourth down, giving UC Davis possession with a short field and starting their drive in the red zone.

“They weren’t allowing me to get the edge as much,” said Haen, “They were dropping out in zone, kind of making me throw it. I got a little trigger happy at times, missed some easy throws, again got some happy feet, but that was expected for my first time out. I feel better prepared after getting some play time, I always want to be ready and prepared to help the team win.”

After another three and out, the Aggies opted for a field goal attempt which they converted, extending their lead to 16 with 2:38 left in the game.

NAU wasn’t able to score on their final drive and UC Davis was able to run out the clock taking the win 40-24.

“We just got to keep getting better,” said Ball. “We’ve got to worry about Montana, all of our energy, effort, and preparation is for Montana. We’ll put this one to bed tomorrow, get back to work, and take the things that we didn’t do well today, get those fixed, then figure out what we need to do to beat Montana.”