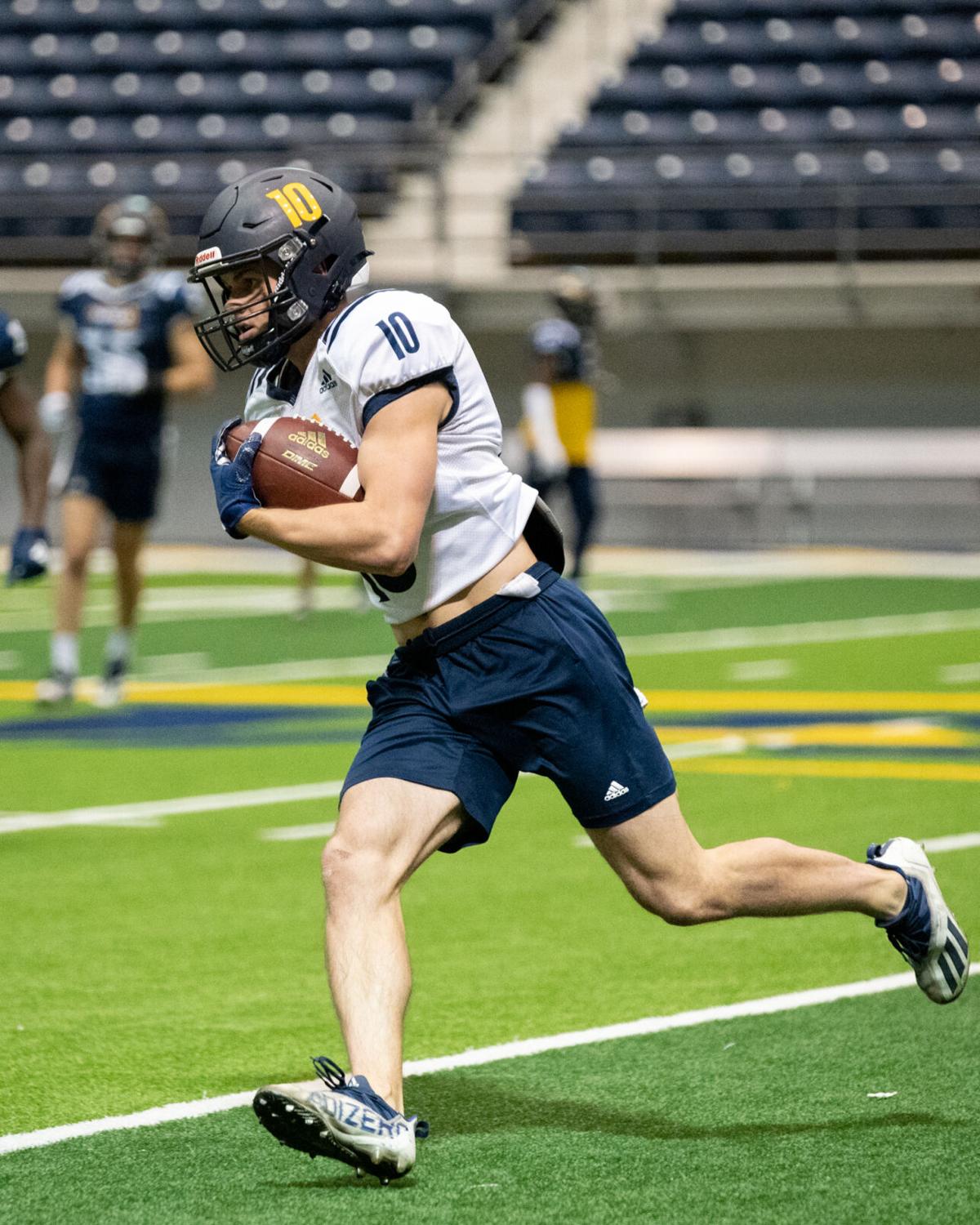 Sophomore wide receiver Hendrix Johnson runs down field after receiving a pass during practice in the Walkup Skydome, Nov. 10. 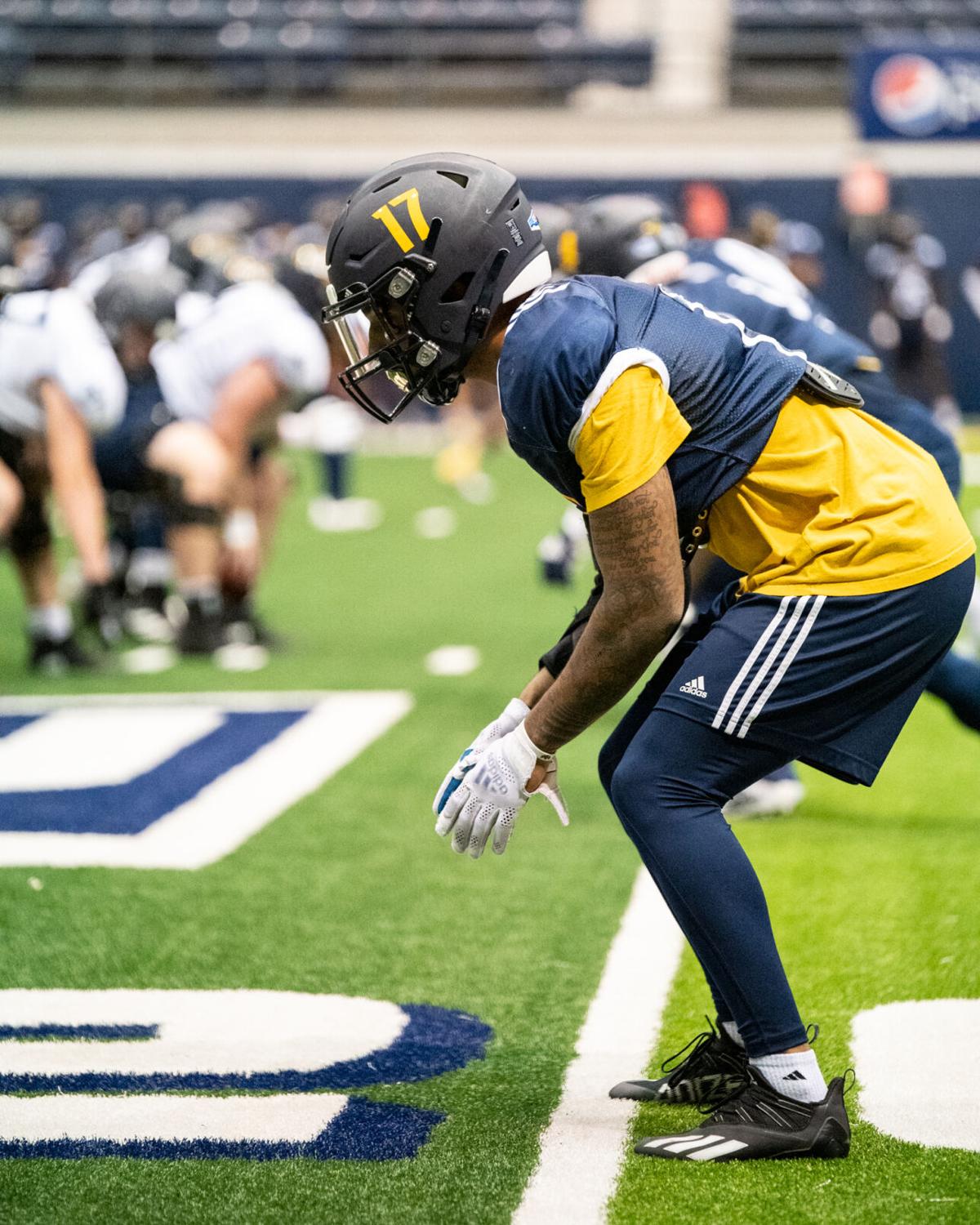 Sophomore defensive back Tavian Montgomery lines up into position for a play during practice in the Walkup Skydome, Nov. 10. 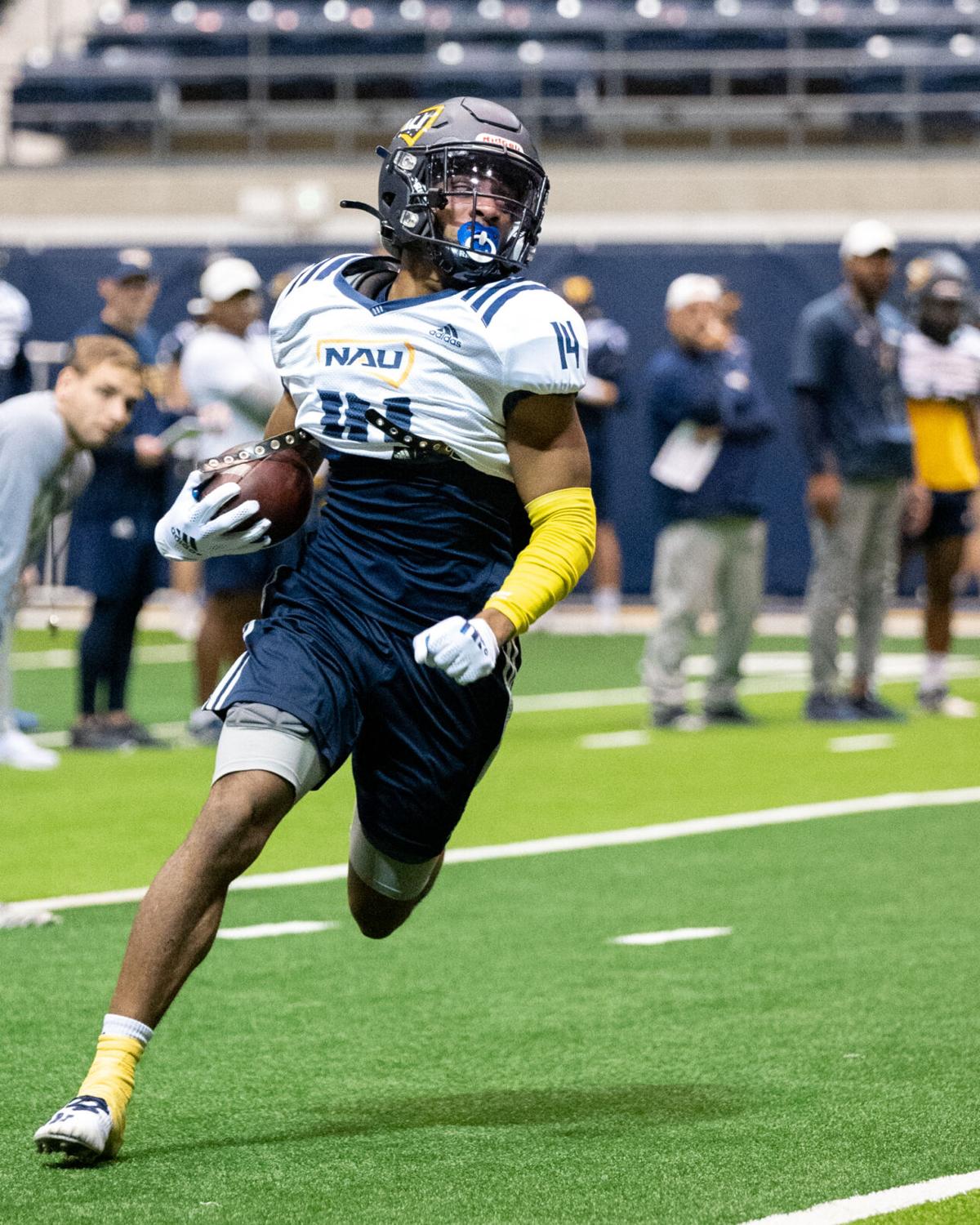 Freshman Elijah Taylor runs with the ball during practice in the Walkup Skydome, Nov. 10. 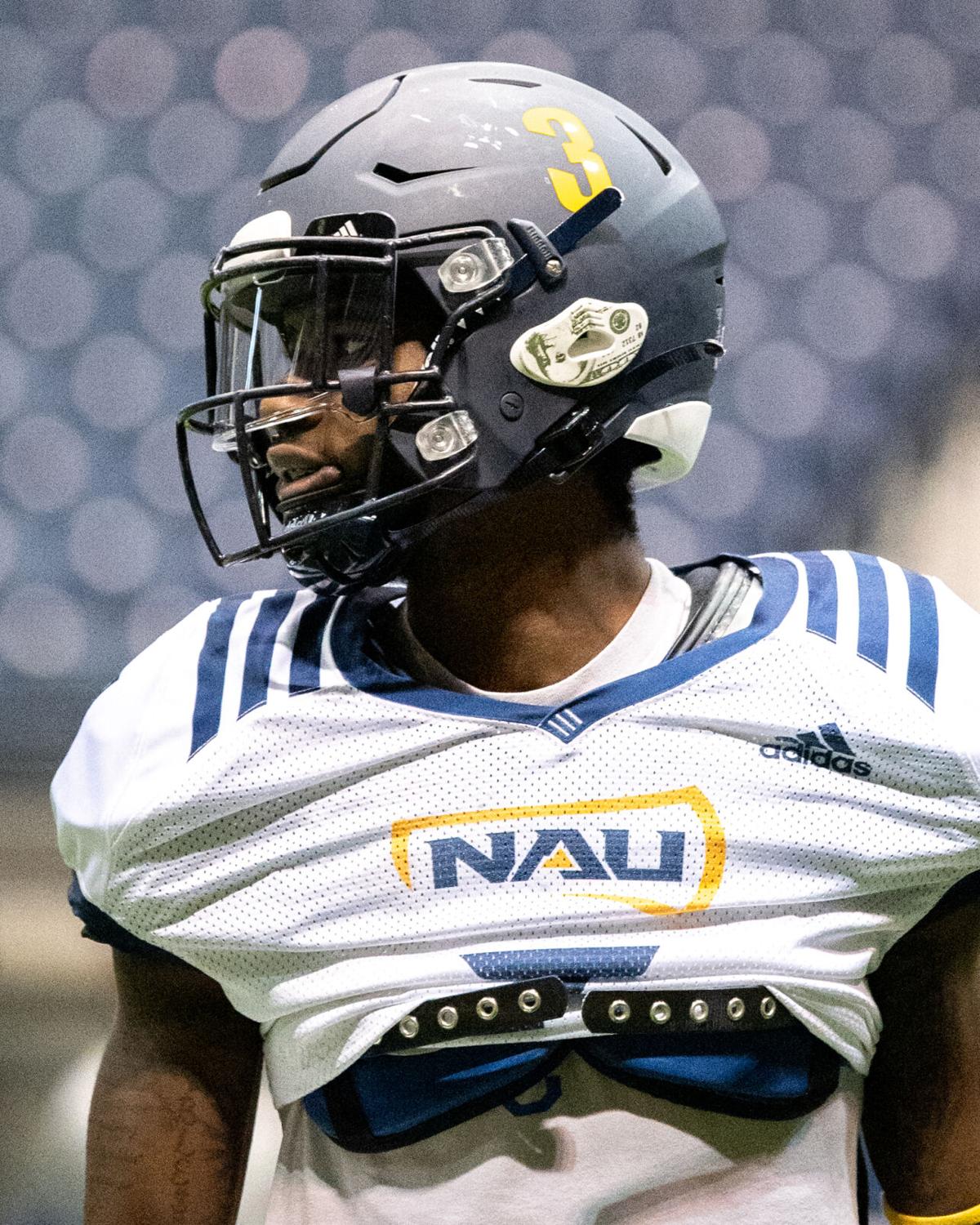 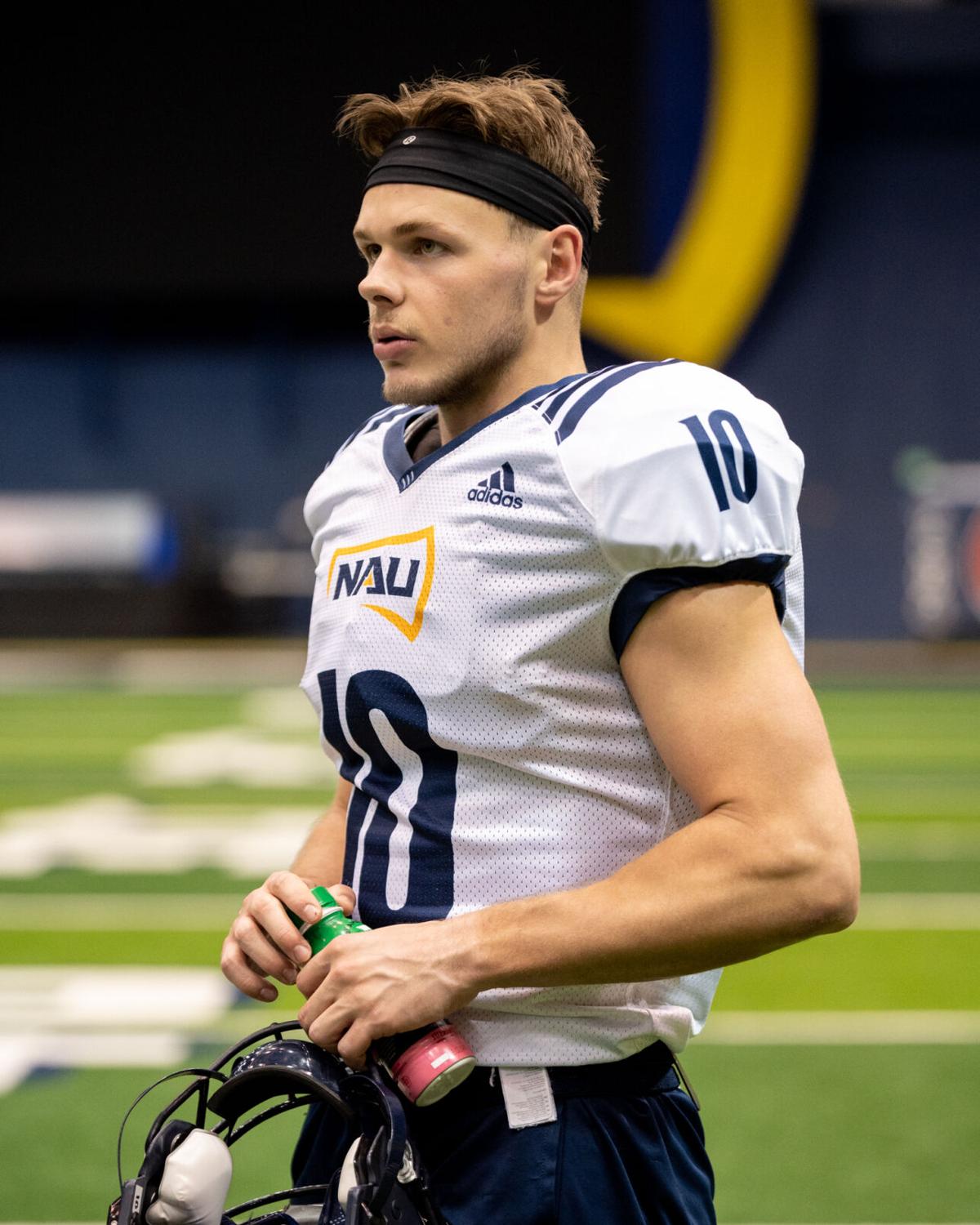 Sophomore wide receiver Hendrix Johnson runs down field after receiving a pass during practice in the Walkup Skydome, Nov. 10.

Sophomore defensive back Tavian Montgomery lines up into position for a play during practice in the Walkup Skydome, Nov. 10.

Freshman Elijah Taylor runs with the ball during practice in the Walkup Skydome, Nov. 10.

After injuries derailed the Lumberjacks in Saturday’s home loss against now No. 4 UC Davis, they look to get back on track against No. 9 Montana. It is the Lumberjacks’ final home game of the season and Senior Day.

For many decorated NAU players it will be their final game in the Skydome. The players being celebrated on Saturday include:

All players listed are graduates in terms of class designation.

Arnson, Aguilar, and Hathoot have anchored a tight-knit NAU special teams unit for quite some time. Arnson is NAU’s career punting yardage leader with over 10,000 yards. Arnson has played 47 games — as of the UC Davis game — and is tied with several others for the school record of games played. Aguilar has also played in 47 games and has 235 points in his career. Hathoot has been the long snapper for the majority of Arnson and Aguilar’s time on the team — they would not have been nearly as successful without Hathoot snapping the ball as consistent as he has. Each of them has been named an All-American in their college football careers.

This talented group of players who, following this season, are leaving NAU Football undoubtedly deserve an in-depth look in the near future.

NAU has four wins and five losses on the season and is an even three and three in the Big Sky. The Lumberjacks will need to win each of their final two games to pull off a winning season overall or in the conference. Last spring was NAU’s first winning season since 2017.

The Lumberjacks looked good in the first half against UC Davis, leading most of the way. The Aggies took a slim 20-17 lead just before the half as the momentum swung following two unfortunate injuries. Freshman quarterback RJ Martinez was knocked out of the contest midway through the second quarter with a knee injury. On the ensuing drive after getting into the redzone, his backup, redshirt freshman Jeff Widener went down — also with a knee injury.

After losing their top two quarterbacks, NAU struggled to get anything going offensively until freshman Niko Haen came in during the fourth quarter — his first collegiate playing time. Haen led the Lumberjacks on their only touchdown drive of the second half but was unable to complete what could have been an amazing comeback.

“Every single quarterback knows their job and that's why Niko was able to go in there and do his thing, take us down the field and get a touchdown on that drive,” sophomore wide receiver Hendrix Johnson said. “One thing we wanted to focus on was just over-communicate, settle in, make sure we’re good, that everybody’s relaxed, and I think that’s why he had success.”

With Martinez and Widener’s game status unknown, the Lumberjacks will need to look down the depth chart for consistent play if they want to pull out this week’s game. Luckily, the Lumberjacks have a talented receiver group who can hopefully keep things rolling in the passing game.

Redshirt freshman Coleman Owen and Hendrix Johnson have been the leading receivers for NAU, combining for over half of the team’s total receiving yardage and touchdowns. Owen leads the team with 38 receptions, 603 yards and five touchdowns. Right behind him, however, is Johnson with 27 receptions on the season for 495 yards, along with five touchdowns this season. Johnson is tied as the team leader for touchdown receptions. Making themselves open only helps the quarterback get the ball to them. The team will need to find a way to create separation against Montana’s secondary to open up the passing game.

“We have great coaches and great players,” Johnson said. “We understand that when a man goes down you’re supposed to step up and be the guy and that’s what we do as a group and as a unit, we’re always ready.”

NAU has not recorded a win over a ranked FCS opponent since Senior Day 2018 — the final week of the season. NAU defeated North Dakota, ranked No. 25 at the time, 31-16. The Lumberjacks also beat No. 7 Weber State earlier in the same season. NAU has not had a win against a ranked opponent since Chris Ball became head coach in 2019.

Montana comes into this week ranked No. 9 in both the Coaches and the Stats Perform FCS polls. The Grizzlies are 7-2 on the season and are coming off a sound 35-0 blowout victory over Northern Colorado in Greeley. Now on the road back-to-back weeks, Montana will have to maintain that same energy it had in Greeley if it wants to make it two road wins in a row.

Montana’s defense is one of the best in the Big Sky and NAU’s offense is going to have to find some sort of success if it is going to win this game.

NAU’s success this season has been linked to their rushing attack and specifically freshman running back Kevin Daniels. Every NAU win this season, Daniels has rushed for at least 100 yards. In every loss, he has been held under that mark.

“Obviously if you have a guy that gets over 100 [yards] that means you’re dominating the line of scrimmage and running the ball effectively,” offensive coordinator and quarterback coach Aaron Pflugrad said. “He’s done a good job of coming in and being the feature marquee back. He’s done a really good job in pass protection and catching the ball out of the backfield, so he’s a really complete back. We’re lucky to have him, now just trying to showcase him in different ways and figure out different ways to get him the football.”

If the trend holds true, NAU could be in trouble this week.

The Grizzlies have only allowed two teams to rush for over 100 yards this season, they haven’t allowed any player to reach the century mark. Montana is has only allowed 2.2 yards per rush attempt this season and seven touchdowns on the ground through nine games. Typically, they’ve also allowed only 75 yards per game on the ground, physically dominating against opposing offenses.

100 yard days are by no means easy or the standard for an individual — those are career days for most players. Daniels has impressed early with multiple monstrous games. His rushing yardage is not the direct correlation to NAU winning or losing, but him having big games has helped the Lumberjacks win some games they, otherwise, may not have. NAU is going to have to find a way to rush effectively against this tough defense with its passing attack possibly tolled by injury.

Teams haven’t been able to throw the ball against Montana that effectively either. The Grizzlies have only allowed eight touchdowns through the air and lead the Big Sky with 14 interceptions. In comparison, NAU has allowed 17 passing touchdowns this season and has 10 interceptions. Redshirt junior corner Justin Ford has been the leading man for the Montana secondary. Ford has an interception in each of Montana’s last seven games and leads the Big Sky with seven picks on the season.

“[Ford] is a great player,” said Pflugrad. “But they have a lot of good players in that secondary. Robby Hauck is flying around, he used to be here so we know him pretty well, great kid, great competitor. It’s more collective as a defense but because of that they definitely have more good individuals.”

The redshirt junior safety Hauck transferred to Montana from NAU before the 2018 season. Hauck is third in the Big Sky with 87 total tackles this season.

The Big Sky Championship is a race between Montana State and Sacramento State with both teams undefeated and six conference wins apiece. UC Davis is 5-1, right behind them, and has a chance to knock off Sac State in the final week of the season if it can get a win over Eastern Washington this week. After getting through this week, Montana travels back home to take on Montana State in a great matchup that could shake up the conference standings with an upset Montana win. But before any of that can play out, Montana must get through NAU to keep its playoff hopes alive.

Saturday’s kickoff is at 1 P.M. MST in the Skydome. ESPN+ has the television broadcast and if you can’t watch, the game is available for listening on the NAU Athletics website.