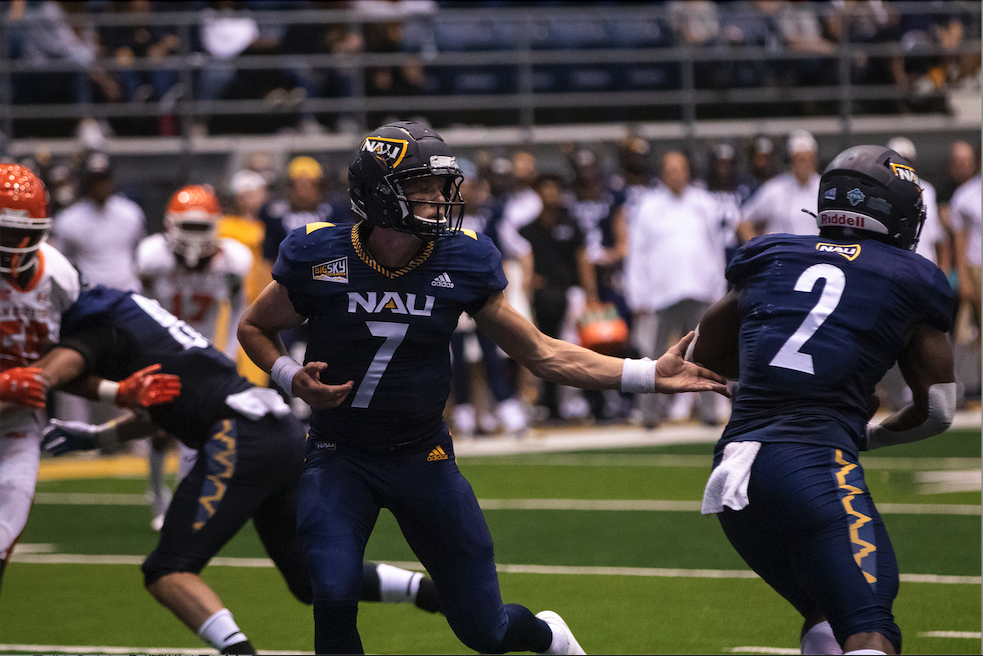 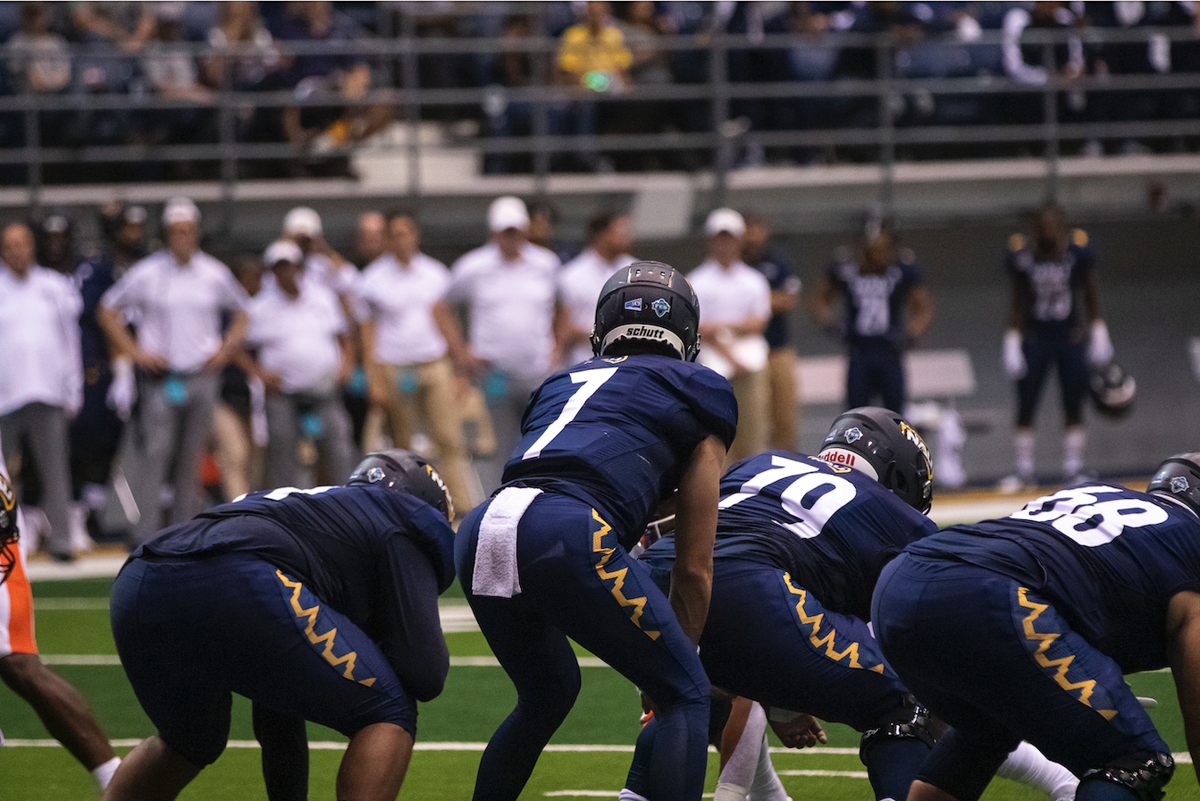 Quarterback Cale Millen under center about to take a snap against Sam Houston State, Sept. 2. 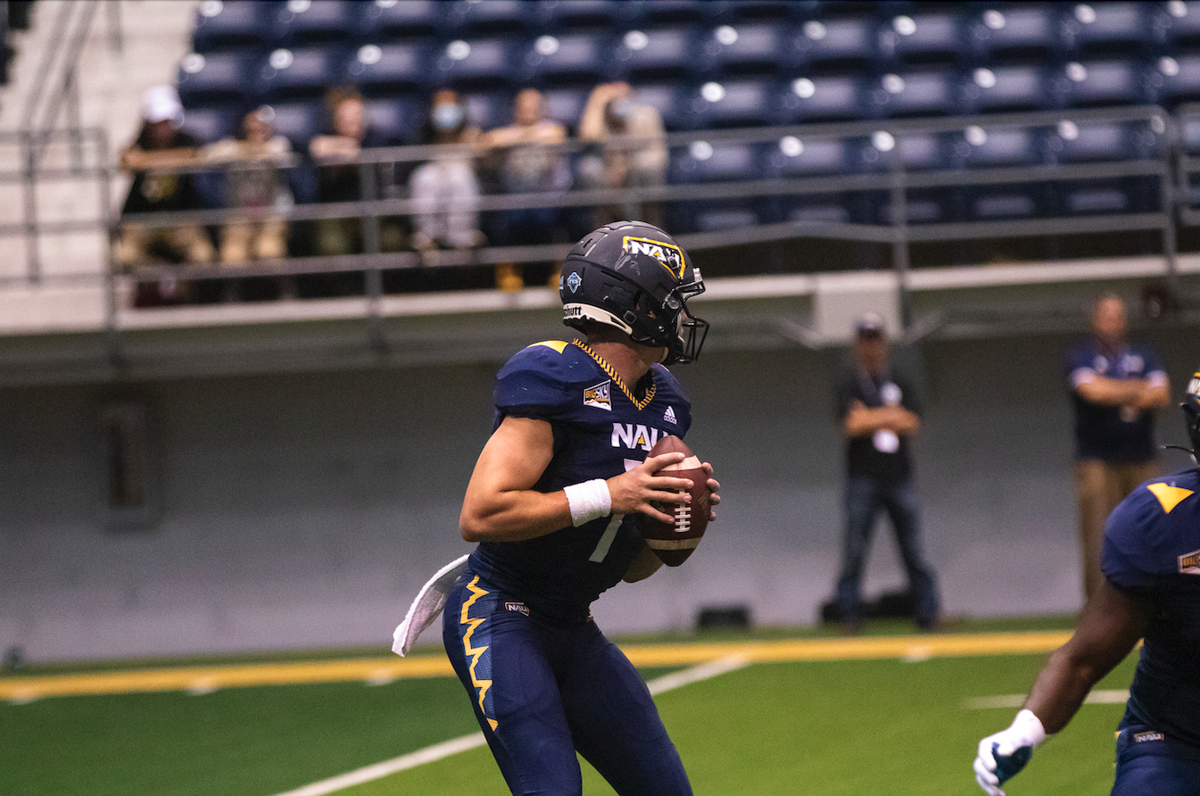 Quarterback Cale Millen under center about to take a snap against Sam Houston State, Sept. 2.

Cale Millen comes from a football family. His dad, Hugh, was drafted in the third round of the 1986 NFL Draft by the Los Angeles Rams and played nine seasons, while his brother, Clay, is a freshman quarterback on the University of Nevada football team. Millen has NFL aspirations of his own, remarking that when the time comes, he hopes to be selected earlier in the draft than his father.

For now, Millen is a redshirt freshman quarterback on a NAU team that carries five others at his position. Four of them are also redshirts or true freshmen; the outlier is sixth-year QB Keondre Wudtee, who started for the Lumberjacks during the pandemic-shortened 2020 season. NAU has a full 11-game slate for this season and still has questions at the quarterback position after its 42-16 loss to defending FCS champions, Sam Houston State. With the quarterback battle unfinished, Millen said he feels good about where he is — and doesn’t want to surrender the role just yet.

“I’m still competing for the starting job this year, and my time will come very soon,” Millen said after a practice that saw him and Wudtee each take their share of reps with the starting offense.

Competing for a starting job is nothing new to Millen, who transferred to NAU after ultimately losing the starting quarterback job at the University of Oregon to Boston College transfer Anthony Brown.

After choosing to move on from Oregon, Millen ultimately decided on NAU, and it’s a choice he doesn’t seem to be second-guessing either.

“I’ve loved it here so far, [and] I think it was a great choice for me,” Millen said. “I love the town, the people here, the team and the coaches, and I feel like this is a really close team. It’s been a very easy adjustment since I moved here in June. My family actually moved to Phoenix as well, so my family’s close to me now too. I’ve just really enjoyed being here.”

Coming from a school that’s produced NFL starters Marcus Mariota and Justin Herbert in recent years, Millen has caught the attention of the local football community. Oregon is certainly well-known for its football program in comparison to NAU, as competition in a Power Five conference like the PAC-12 is generally perceived as being greater. Millen noted some truth to that idea but is much more focused on the competition he faces now, as well as with the new audience gained rather than the one potentially lost.

“Playing in the Power Five conferences, it’s bigger football; there’s a lot of talent, but competition is the same,” Millen explained. “On paper, guy to guy, it really hasn’t been much of a difference. Obviously, the big-time recruits play in the Power Five, the speed of the game is a little faster. That being said, I think the FCS is great. It’s a great conference to watch, I’m glad we’re on ESPN+ now and it’ll be fun to get a lot more people watching. It should be exciting.”

Back in June, the Big Sky Conference and ESPN announced a partnership that allowed conference games to be streamed on the platform.

Millen’s work ethic also caught the attention of his head coach, Chris Ball, who led the Lumberjacks to a winning record during the pandemic-shortened season. The team’s 3-2 tally was the best since 2017, when NAU went 7-5.

“He’s a really hard worker, one of the hardest working guys on the team,” Ball said. “He’s extremely talented and very athletic. He came in here and did a great job in summer conditioning, and he continues to get better every day.”

Ball also offered praise for Wudtee, describing last year’s starter as one of the smartest players he’s ever been around. Clearly, the coach likes his options.

Millen doesn’t expect to win the starting job just because he’s a PAC-12 transfer. All he’s worried about is making sure his teammates know how hard of a worker he is, and that he doesn’t carry himself any differently based on where he’s come from.

“I don’t really listen to that,” Millen said. “The point I first wanted to make when I came here was to earn the respect of my teammates by the way that I work, and I’ve shown that from day one. Coming out every day in the summer workouts, giving my all, winning the sprints, all that. I think I’ve shown my teammates that I’m not cocky. I’ve come from a bigger school, but I just want to work, that’s all I want to do.”

Millen also had high praise for the man with which his fate ultimately rests, noting some coaches just coach football, but Ball is different.

“I think [Ball] does an amazing job,” Millen said. “He’s teaching us to be grown men and how to live outside of football once it’s over, because it ends for everybody at some point. He’s helping to groom us to be the grown men we’re supposed to be. In just the short time I’ve been here, he’s given us so many valuable life lessons. Whether it be relating to your family, your future wife or your kids, he’s a great person and I love him already.”

NAU football kicked off its season Sept. 2 when it lost to Sam Houston State at the Walkup Skydome, 42-16. The season opener saw Wudtee replaced early in the game due to an ankle injury, completing one pass for a 3-yard loss. Millen got some playing time at the very least, completing 2-of-3 passes for 19 yards, including an 18-yard touchdown pass to wide receiver Stacy Chukwumezie. Millen might not have gotten to showcase all his talent in Week 1, but one thing’s for certain: Cale Millen didn’t become a Lumberjack to sit on the bench.