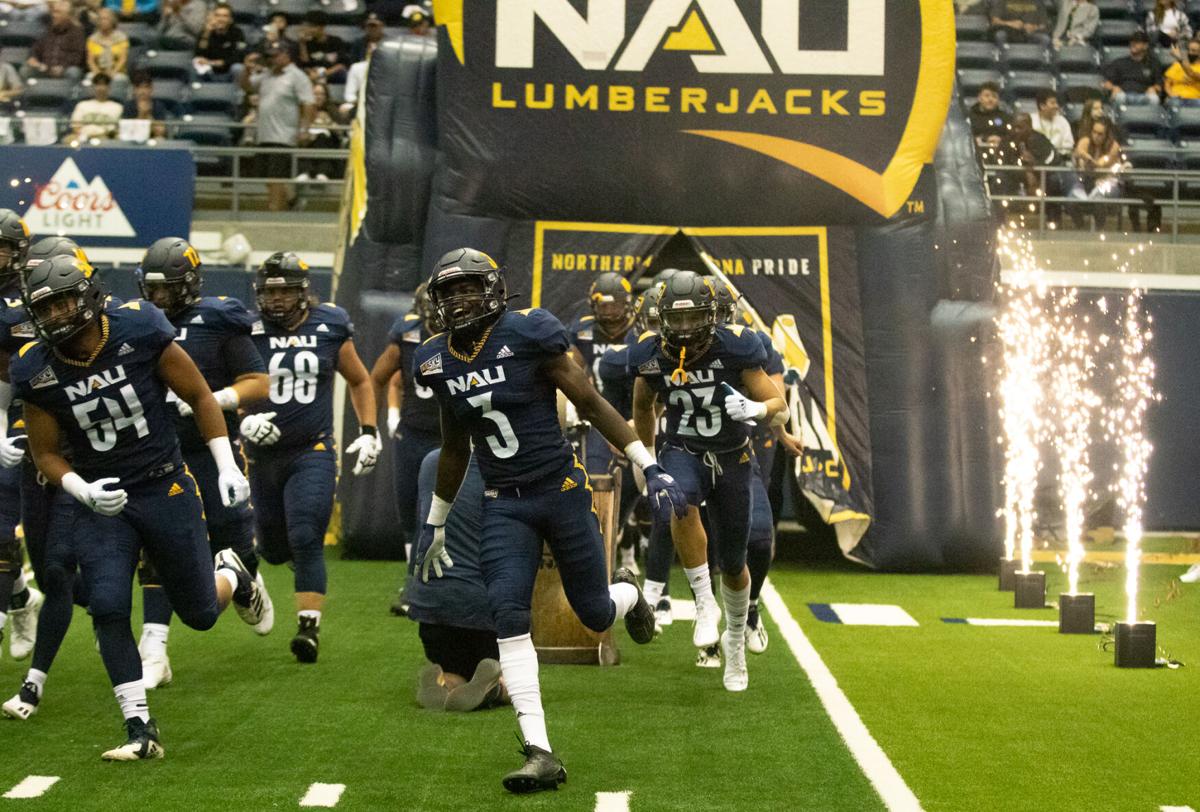 NAU football runs out of the locker room against Sam Houston State University to open its college football season. The 'Jacks lost 42-16 on Sept. 2. 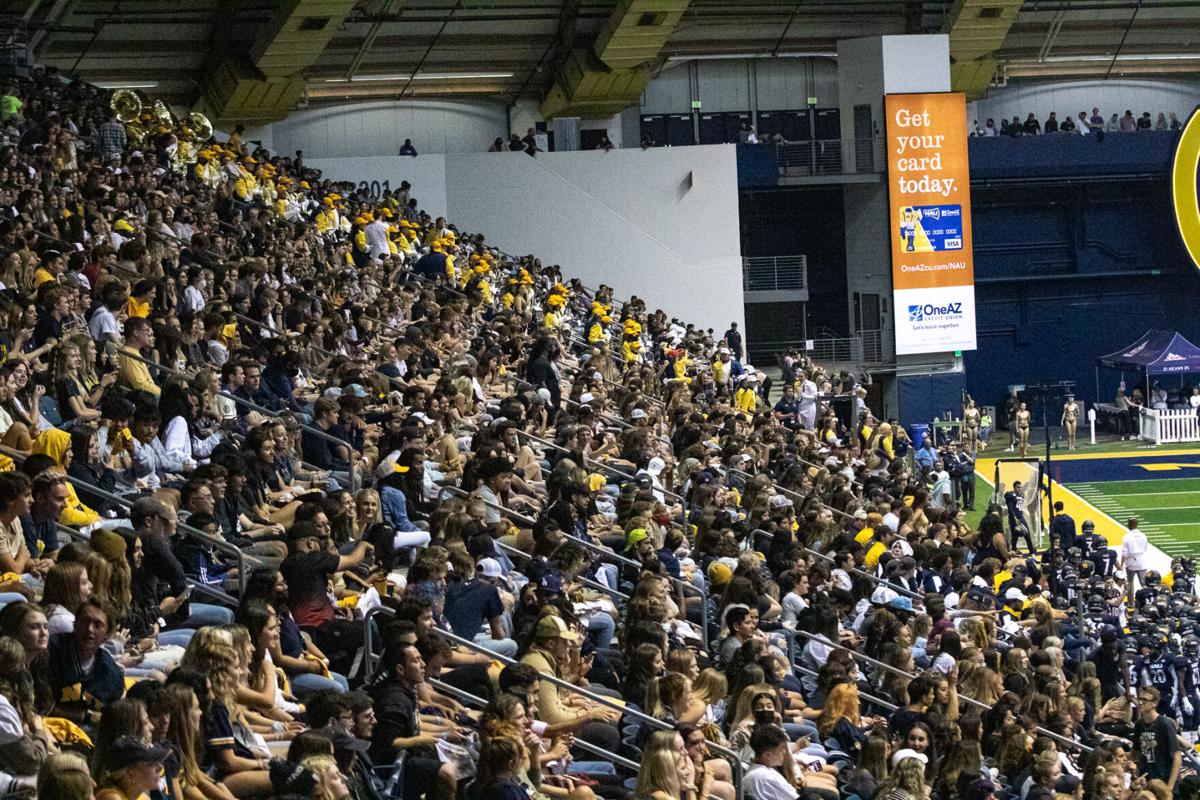 J. Lawrence Walkup Skydome is filled to the brim at the first home football game since the pandemic started, Sept. 2. 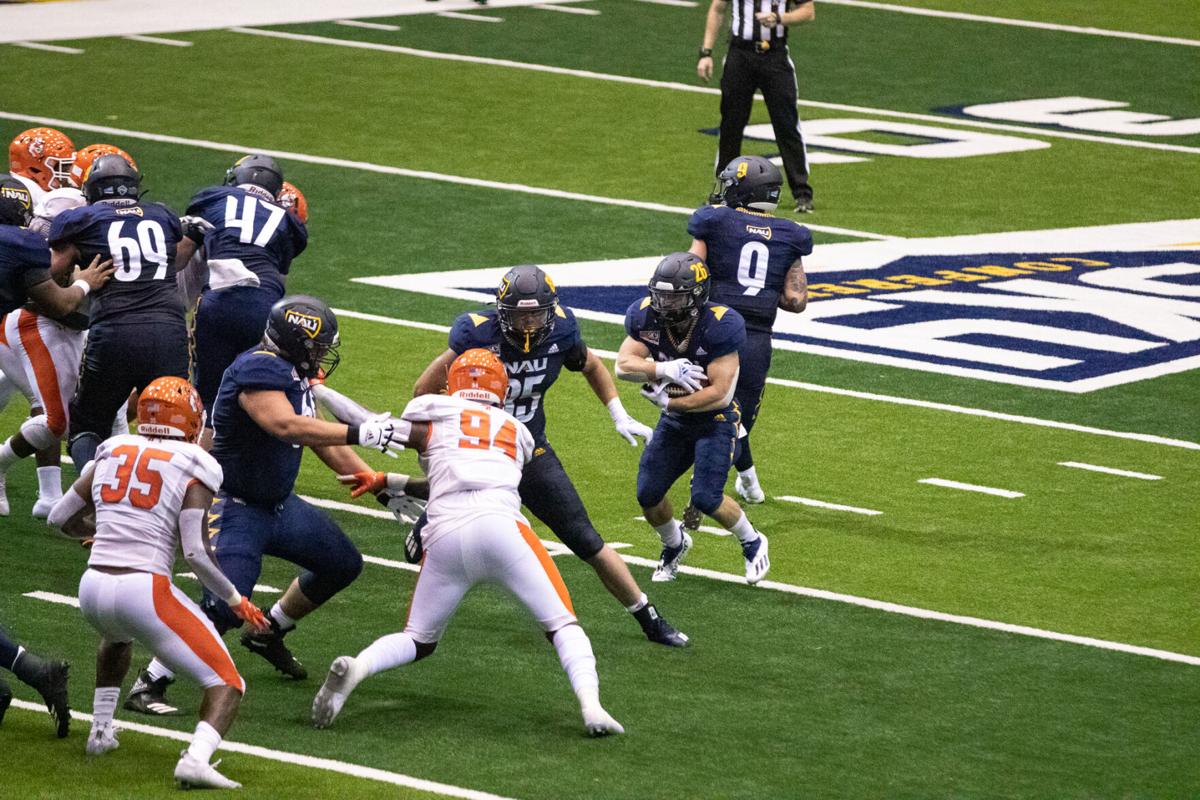 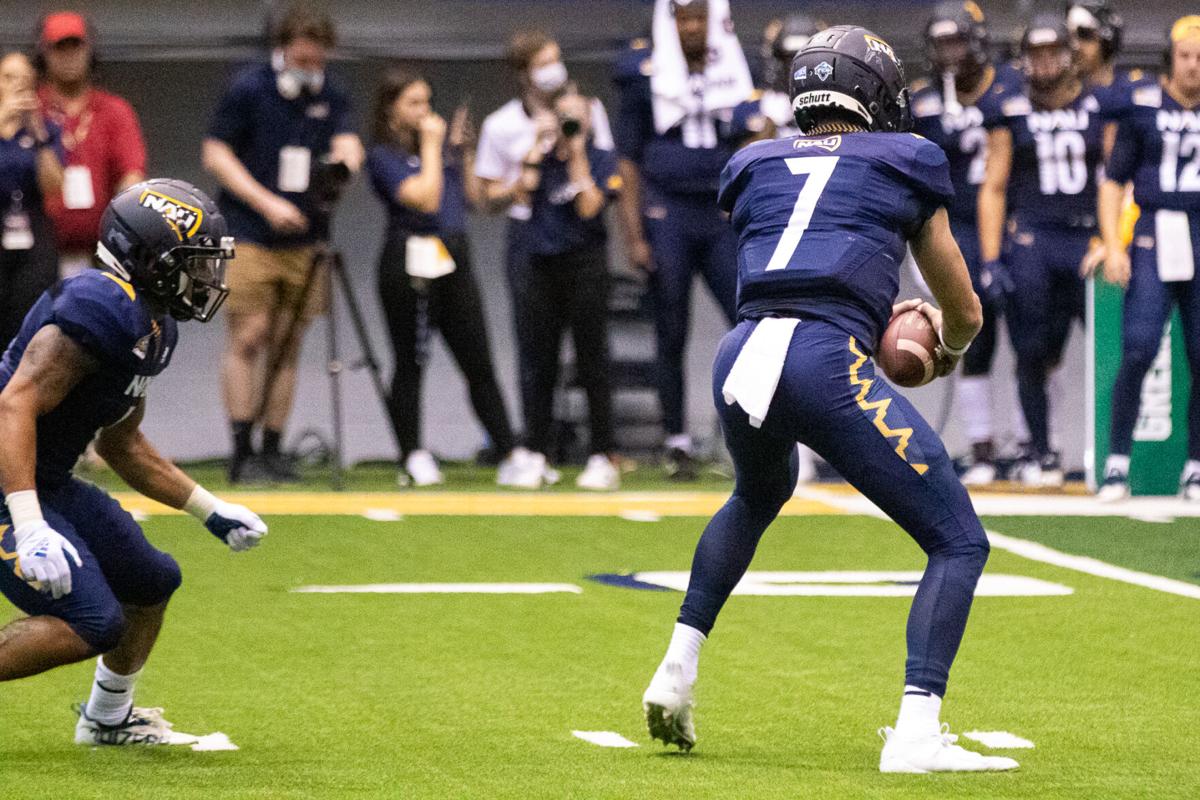 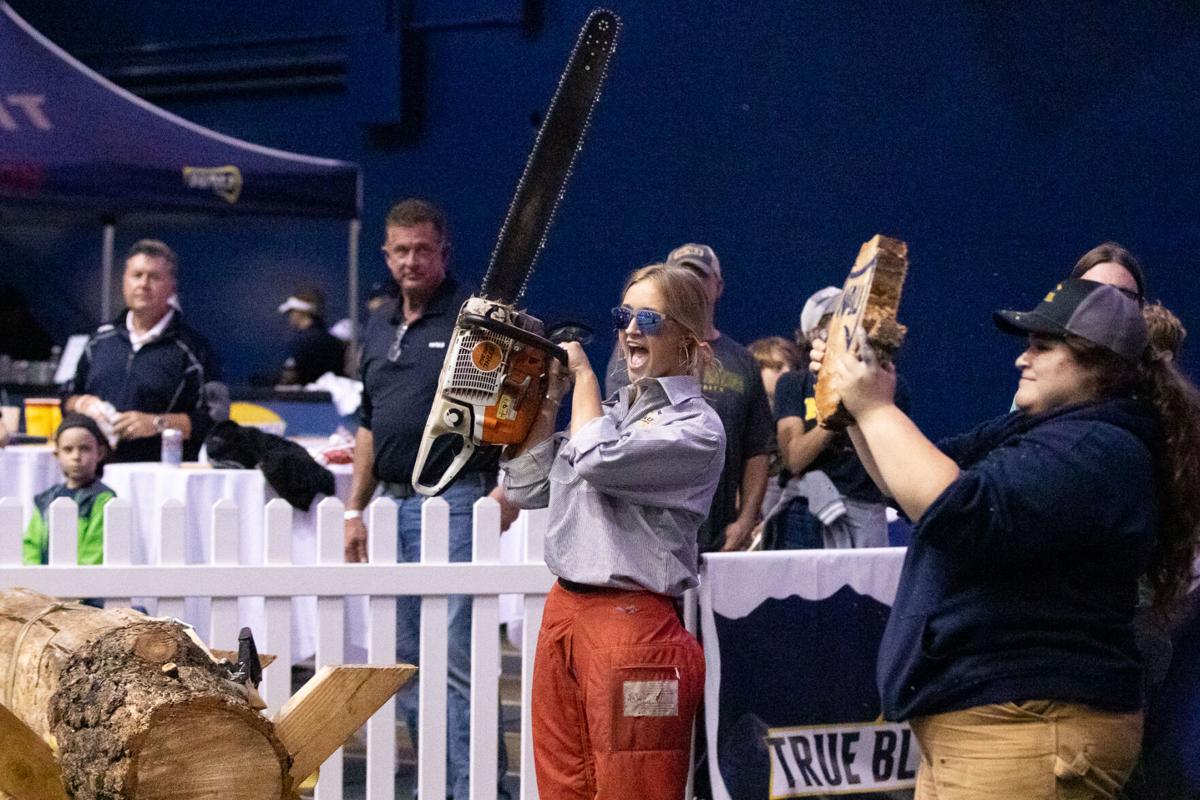 After NAU scored a touchdown, the traditional piece of lumber was cut, Sept. 2.

NAU football runs out of the locker room against Sam Houston State University to open its college football season. The 'Jacks lost 42-16 on Sept. 2.

J. Lawrence Walkup Skydome is filled to the brim at the first home football game since the pandemic started, Sept. 2.

After NAU scored a touchdown, the traditional piece of lumber was cut, Sept. 2.

Under buzzing lights at Walkup Skydome, NAU sounded the Thursday-night kickoff of its football season.

For the thousands of screaming freshman and sophomores storming the field, however, those sounds rang in a season-opening loss for the Lumberjacks. Sam Houston State, defending FCS champions, clawed its way through the freshly-placed turf en route to a 42-16 win.

Similar to the underwhelming sparklers that introduced the near-full student section to a fresh season of NAU football, the Lumberjack offense was a dud through the first 15 minutes of play. Redshirt senior quarterback Keondre Wudtee struggled against the Sam Houston pressure.

His only completion of the night came on a pass in the backfield to redshirt junior wide receiver Brandon Porter — and ended with a two-yard loss.

“I’m not sure what possession it was on, but he hurt his ankle,” Ball said.

The Lumberjack defense started with a bang as Sam Houston took the ball to open the evening.

However, Widener and the NAU offense couldn’t capitalize on any positives from the defense, which included two fourth-down stops.

“He’s [Widener] got to do a better job of taking care of the football,” Ball said.

It would take until the closing minutes of the second quarter for the Lumberjacks to get on the board, thanks to a methodical drive that saw Widener find Porter on a four-yard out route to net NAU’s first points of the season. The possession lasted four minutes and 33 seconds.

In the first half, Sam Houston ate away at NAU’s pass defense on the path to three touchdowns.

The Lumberjacks surrendered three passing plays of over 20 yards, with two resulting in scores and one coming as Schmid found redshirt senior Brennon Tibbs on a quick slant that turned into a 41-yard breakthrough to the end zone. To close the first quarter, Schmid hit sophomore running back Noah Smith for a 22-yard touchdown on a designed screen.

Early in the first half, a key moment came when senior linebacker Harrison Beemiller was ejected due to a late hit ruled as targeting.

“It’s always next man up, but Harrison is irreplaceable,” redshirt junior safety Morgan Vest said. “He’s one of the smartest players I’ve ever been around.”

Vest carried the majority of the workload for the Lumberjacks’ defensive unit. He led the team in total and solo tackles with nine and five, respectively, along with deflecting a pass.

Sam Houston took a 21-7 lead into halftime, but NAU found a quick burst of momentum in the second half as Widener paced a strategic five-minute drive to set-up graduate student kicker Luis Aguilar for a 30-yard field goal after he shockingly missed two in the first half — and one from 29 yards.

With the Lumberjacks down just 11, a stop on the ensuing Sam Houston drive would put them in position to make the game interesting.

NAU did exactly that when a dreadful ball from Schmid was easy pickings for freshman defensive back Colby Humphrey, and after an ensuing penalty on the Bearkats, the 'Jacks were in business with the ball on their own 45.

Widener led a strong drive that put NAU near the red zone, but Sam Houston got a needed break with an all-out blitz that netted its first sack of the game. This was all the defending champs needed to see; on the next play, junior linebacker Trevor Williams picked off the heavily-pressured Widener and took it to the opposite end zone to make it a three-possession lead for the Bearkats.

For the Lumberjacks, bleeding turned to hemorrhaging on the following possession when redshirt freshman Coleman Owen had a ball bounce off his hands deep in NAU territory, which freshman linebacker Ysidro Mascorro snagged for another interception.

Within a seven-minute span, a 21-10 score unraveled into a 35-16 blowout, effectively deciding the game with another quarter to play.

After the Lumberjacks completed a fourth-down conversion, their lone second-half touchdown came on a connection from Widener to redshirt senior wide receiver Stacy Chukwumezie.

Sam Houston left the Skydome with a whopping 322 yards on 36 carries. The team was led by redshirt junior running back Ramon Jefferson, who put together 107 yards on 10 carries and a touchdown.

“We weren’t disciplined enough, and we didn’t stay in our gaps,” Ball said.

As for Widener, he ended the day going 17 of 29 with 215 passing yards, but the two INTs stand out on the stat sheet.

Chukwumezie led the Lumberjacks in receiving with 58 yards on five receptions and a touchdown.

“We were just working the matchups,” Chukwumezie said. “We know we have the guys in the room that can win against anybody.”

NAU starts this season 0-1 and, over the next three weeks, will have to be road warriors. The trip begins next Saturday with a visit to the University of South Dakota, which will serve up a date in Tucson the following weekend against inner-state rival and Pac-12 conference school UArizona.

The Lumberjacks will not return to the Skydome until a family weekend match-up against Idaho State, scheduled for Oct. 2.