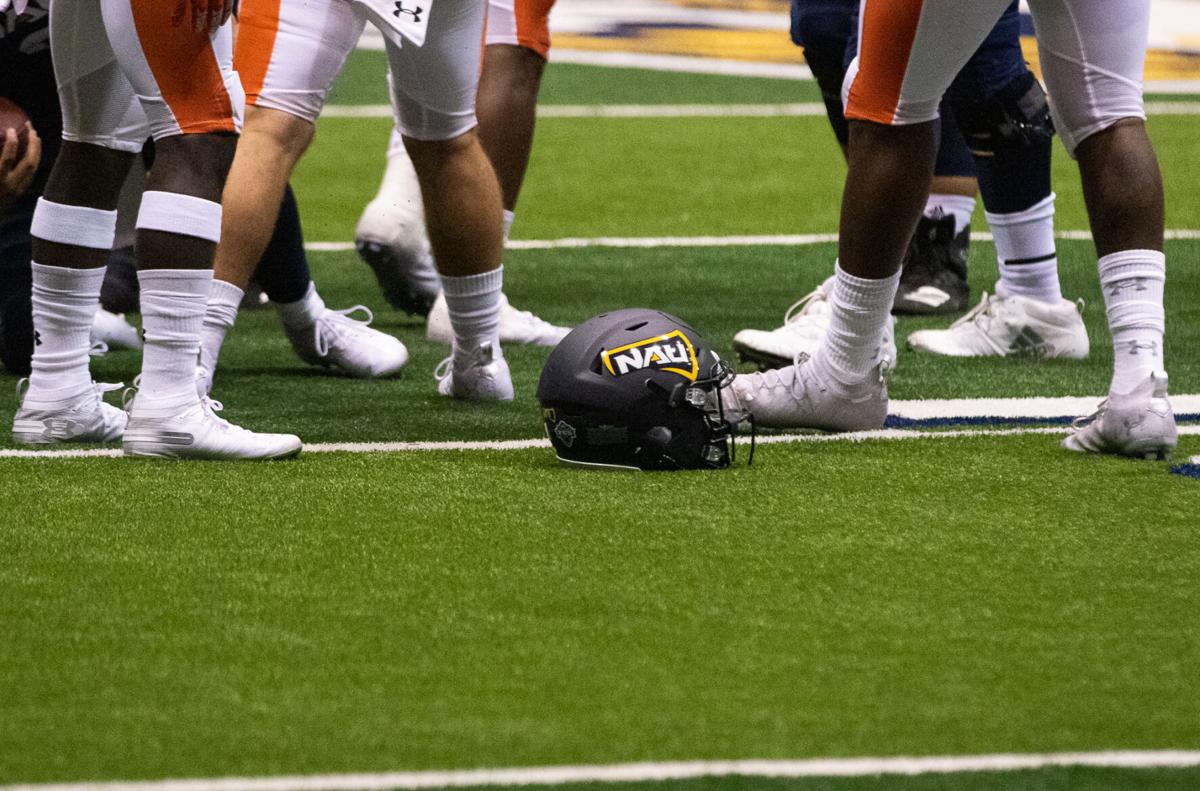 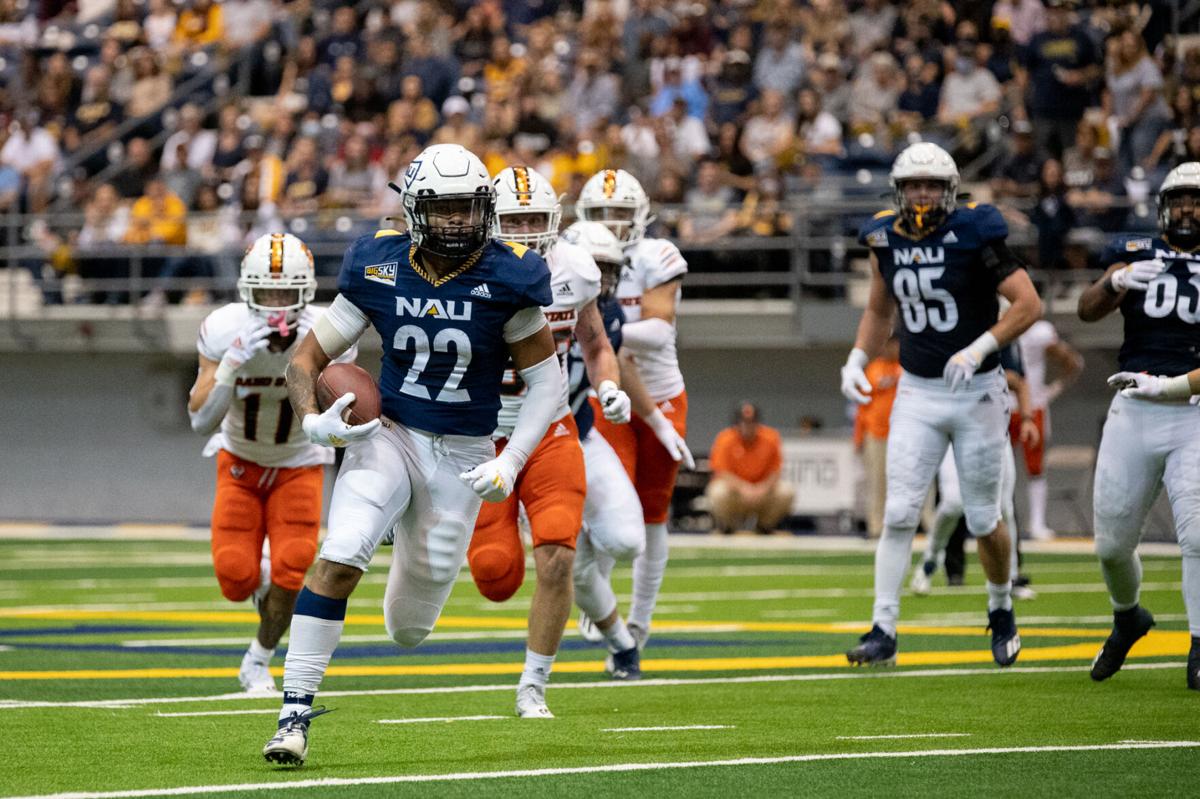 NAU got its second win of the season on Oct. 2, moving to 1-1 in conference play heading into the team’s bye week. The Lumberjacks put up a season-high 649 yards on offense, absolutely exploding after finding their rhythm in a big way.

“We kind of dug ourselves a hole the first game, but we bounced back,” redshirt junior safety Morgan Vest said. “Coach [Chris] Ball’s message to us last week was to respond, and I feel like we really did that.”

Freshman quarterback RJ Martinez was awarded his first Big Sky Offensive Player of the Week for his efforts in the win over Idaho State. Martinez completed 26 passes on 45 attempts, good for 369 yards and three touchdowns, and he also tacked on 57 rushing yards — including a 41-yard scramble for a score. With both of NAU’s wins this season coming with Martinez under center, it is hard not to get excited about his potential. After the offense seemingly found its footing last game, it will be important to see how players respond coming off their rest week.

On the defensive side of the ball, Vest received Player of the Week honors for his two-interception performance against Idaho State. He also added two tackles to his stat line, bringing his season total to 42, the fifth-most in the conference. Vest’s two interceptions have him tied for second in the conference early in the season.

“Obviously, my parents were excited,” Vest said. “My grandparents called and congratulated me, but other than that, I guess it’s a great award and I appreciate it. But at the same time we’re still looking to get better and improve every week, so that’s where my focus has been this week.”

Graduate linebacker Harrison Beemiller has been another pivotal leader on NAU’s defense as he received a Player of the Week award of his own for his efforts against UArizona. Beemiller ranks sixth in the conference with 7.5 tackles for loss, and his total of 30 tackles on the year puts him at 20th in the conference. He also has a forced fumble.

On the defensive line, NAU graduate student Carson Taylor has been the man. With four sacks on the year, Taylor leads the team and ranks fifth in the conference at getting to the quarterback. His seven tackles for loss are good for eighth in the conference, joining Beemiller in the top 10 of that category. He also has a forced fumble to his credit early in the season.

As a defensive unit, NAU faced stout competition through the early stages of the season. In their first two games, the Lumberjacks gave up 42 and 34 points and lost both games. However, over the last three games, the team has not allowed an opponent to reach 20 points, posting a 2-1 record over that stretch. The Lumberjacks held Northern Colorado and Idaho State to 17 points each, and UArizona to 19 points. NAU’s defense is currently ranked sixth in the conference in points allowed per game, and it continues to rise after more stellar performances.

In terms of yardage, the defense currently ranks fourth against the rush and seventh against the pass, and its six interceptions are fourth-best in the conference. However, the squad has struggled to get to opposing teams’ quarterbacks with only nine sacks on the year, pushing it into the bottom four of the conference in that category.

“I think we really just started playing for each other,” Vest said. “We love playing next to each other, we really gelled. We really just simplified everything and made it our mantra to play harder and want it more. I think you can see that in our effort in the performances we’ve been putting together.”

On special teams, graduate student and All-American kicker Luis Aguilar has hit a slump early in the season, making just four of his nine field-goal attempts through the first five weeks. Aguilar is 10-of-11 on PATs, however, and his only miss came Oct. 2 in the win against Idaho State. Getting a little more consistency from Aguilar would go a long way in helping this NAU offense down the stretch.

Graduate student and All-American punter DJ Arnson has been a bright spot for this squad early on. He was NAU’s other recipient of Big Sky Player of the Week for his role in the win against UArizona. With 32 punts on the year, Arnson is averaging 45.9 yards per punt and has moved 1,469 yards of field position, the most yardage of anyone in the Big Sky. He also hit nine punts over 50 yards, tied for most in the conference. His 11 punts downed inside the 20 are the second most in the Big Sky, and he only has three touchbacks.

To say he has been a force in the special teams game would be an understatement. Football teams live and die with field position, and Arnson has been one of the most consistent punters in college football in flipping the field for NAU’s defense.

The Lumberjacks’ offensive inconsistencies have been their kryptonite in the early days of the season, with the lowlight being a 10-point outing in a defensive battle against Northern Colorado that saw them come up short on a fourth-and-1 in overtime. Against Idaho State, NAU bounced back from the poor performance, and the focus will be on replicating that success coming out of the bye week and moving toward the rest of the season.

NAU’s offense currently ranks in the bottom four in the conference in points per game, with an average of just 20.4. However, the Lumberjacks rank sixth in the conference in both passing and rushing yards, and the offense ranks fifth in yards overall. NAU has been able to move the ball, but has struggled to turn possessions into points with kicking inconsistencies and turnovers. However, after last game’s offensive explosion, it will be interesting to see if this offense has officially clicked going forward.

“It was great to see the offense start clicking,” Vest said. “It all works together: The defense gets off the field more, we get the offense more chances to score and the more the offense scores the easier our job becomes. I think both sides of the ball worked extremely well together in the last game. If we can keep it up, I think it’s a really deadly combination, and I think we’re capable of doing that.”

Freshman running back Kevin Daniels has been a bit of a surprise breakout for NAU. He currently ranks fouth in the conference with 335 rushing yards, averaging 4.9 yards per carry. He has one rushing touchdown and four receptions for 22 yards. At 6-foot-2 and 225 pounds, Daniels is built for this NAU offense, but he only accounts for 33% of the team’s carries with other talent in the backfield.

Fans were also introduced to freshman running back Draycen Hall in the shortened spring season. Hall leads running backs in receptions with 18 for 138, as well as 104 on the ground, but has yet to find the end zone this season. With his versatility in the rushing and passing games, Hall could find himself playing more snaps later in the season.

As a unit, NAU’s group of wide receivers has caught the ball pretty evenly. Redshirt sophomore Jamal Glaspie has 17 catches for 210 yards and a touchdown. Meanwhile, redshirt freshman Coleman Owen has 16 catches, leads the team with 272 yards and has also posted two touchdowns. Sophomore Hendrix Johnson has recorded 13 catches for 189 yards and also has two touchdown grabs. Graduate student Stacy Chukwumezie, who has been a year in, year out team leader, suffered an injury Week 4 against Northern Colorado and missed last week’s game, but had 16 receptions for 213 yards and a touchdown beforehand. NAU has a number of players who can get the job done in the receiving game, along with a lot of young weapons who should be threats for years to come.

For NAU, consistency and effort are going to be key in whether or not it pulls out wins through these final six games. Coming off a big win and bye week, the Lumberjacks can enjoy that victory, focus on the things that went well, fix whatever did not and continue building on those successes.

The Lumberjacks continue their run toward the Big Sky title next Saturday against Southern Utah in NAU’s homecoming game.

Sitting at 2-3 overall and 1-1 in the Big Sky, conference games round out the remaining schedule for NAU. The Lumberjacks will face Southern Utah Oct. 16 for their Homecoming game; Sacramento State Oct. 23; Idaho on Oct. 30; UC Davis on Nov. 6 for its Native American Heritage Game; Montana on Nov. 13 for Senior Day; and conclude with Cal Poly on Nov. 20.