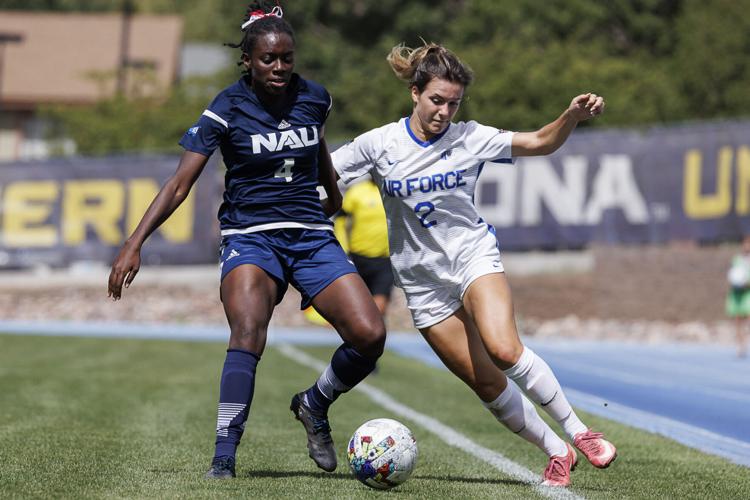 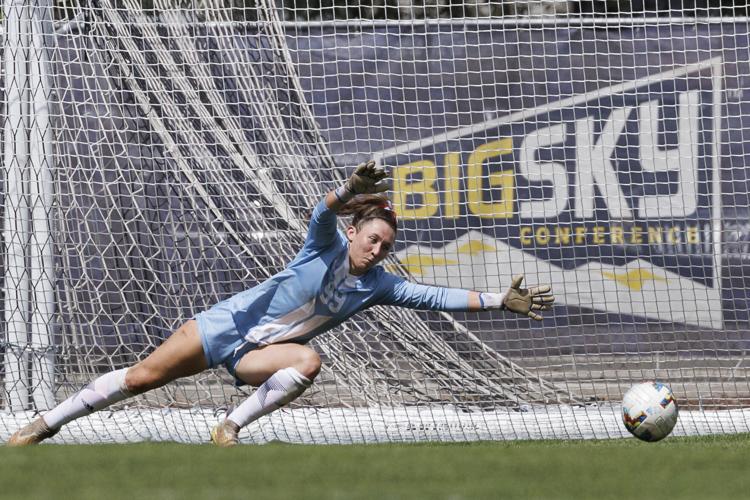 Junior Goalkeeper Ashley Williams (99) misses a save early in the game Sunday at Lumberjack Stadium, Sept. 11. 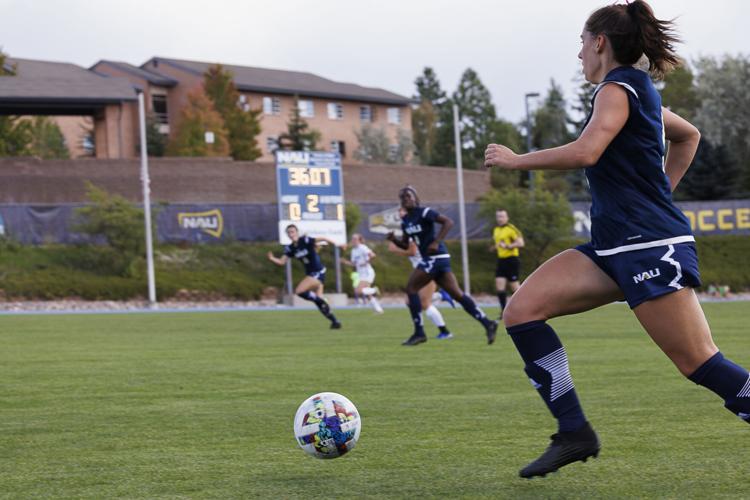 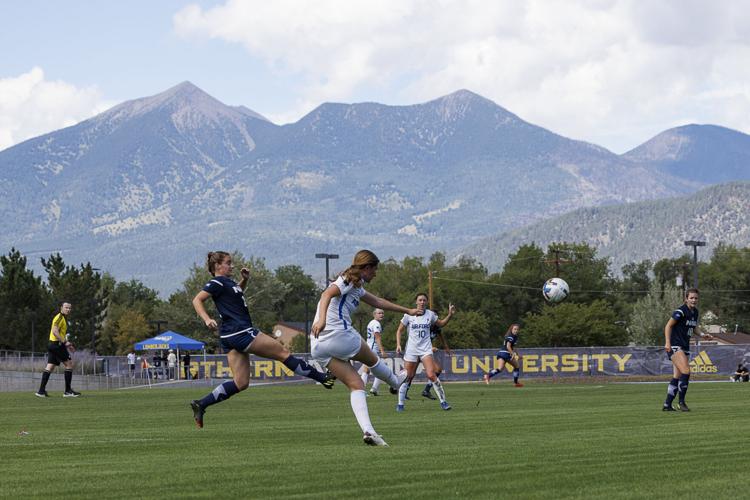 Sunday's game is contested at the foot of the San Francisco mountain range, Sept. 11. 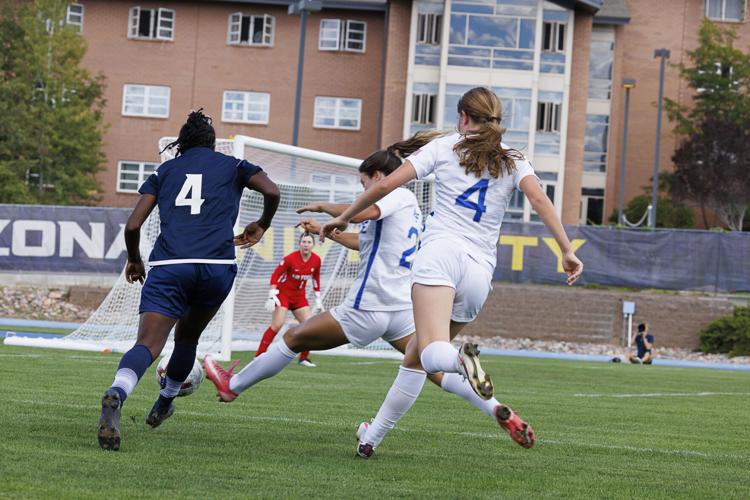 Junior forward Dai Williams gets a good look at the goal Sunday at Lumberjack Stadium, Sept. 11. 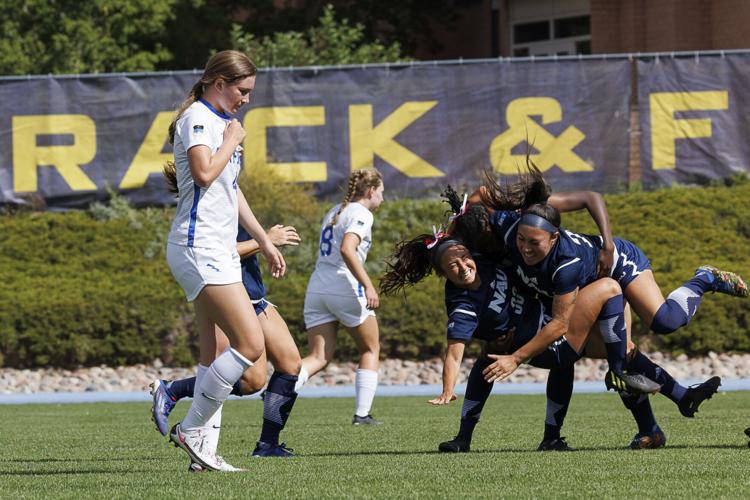 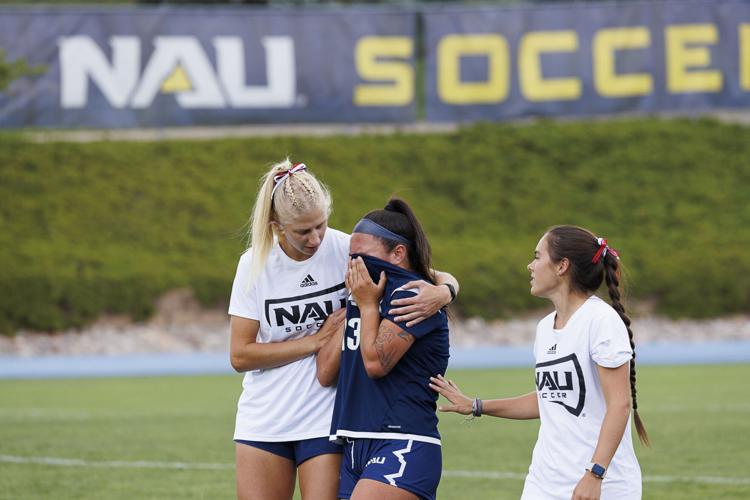 Junior Goalkeeper Ashley Williams (99) misses a save early in the game Sunday at Lumberjack Stadium, Sept. 11.

Sunday's game is contested at the foot of the San Francisco mountain range, Sept. 11.

Junior forward Dai Williams gets a good look at the goal Sunday at Lumberjack Stadium, Sept. 11.

In their first matchup since 2016, and fourth matchup ever against the Air Force Falcons, the NAU Lumberjacks lost on a last-second heartbreaking goal 2-1 and fell to 0-4-2 on the season.

NAU started the first minutes of the game strong and had an early shot go over the crossbar; that was the story of the first half between the Lumberjacks and Falcons. As the players started to get into the flow of the game, it was the Falcons who were in control for most of the first 45 minutes. About six minutes into the game, Air Force junior midfielder Grace Sublette fired a long-range shot from outside the box that just missed off of the Lumberjack’s crossbar and bounced back into play.

Good goalkeeping by NAU Ashley Williams and stout defense kept the game 0-0 for most of the first half.

Both teams continued to get their chances in the first half, but Air Force’s constant pressure helped them capitalize when an NAU goalkeeping foul led to a Falcons penalty kick after Air Force sophomore midfielder Andrea Mosher was taken down in the box. With 21 minutes left in the first half, Mosher calmly slotted the ball in the bottom corner of the NAU goal to make it 1-0 Air Force.

The home crowd started to get into it as the Lumberjacks created many chances from outside the box. A controversial no-call when NAU junior forward Alison Veloz got taken down in the box fired up the team and the Lumberjack crowd.

With 26:05 left in the second half pressure from Veloz and junior forward Dai Williams led to NAU getting the ball in the final third where Williams delivered sophomore forward Kayla Shebar an excellent pass and Shebar would easily slot the ball past the Air Force keeper.

Air Force tried to immediately answer back but NAU’s strong defense led by senior midfielder Logan Maszton and steady goalkeeping kept the game tied 1-1 most of the rest of the second half.

It seemed all of NAU’s constant pressure on Air Force’s back line and persistent through balls through the air would give NAU a lead when junior forward Josie Novak was taken down in the box and given a penalty kick with 2:53 left. Much to the Lumberjack's dismay and to the Falcon's joy, Novak sent the ball over the crossbar; keeping the game tied.

Air Force plays next on Sept. 15 in Brookings, South Dakota against the South Dakota State Jackrabbits and will try to make it their third win in four games.

NAU plays next again on Sept. 15 as well at Lumberjack Stadium against Ottawa University at 7 p.m. MST and will continue to look for its first win of the season. Ottawa will look to give NAU a strong challenge as they go for their seventh win in nine games.