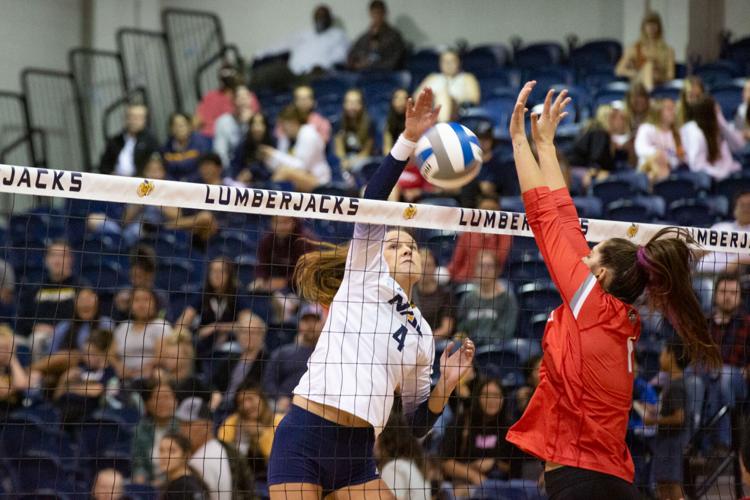 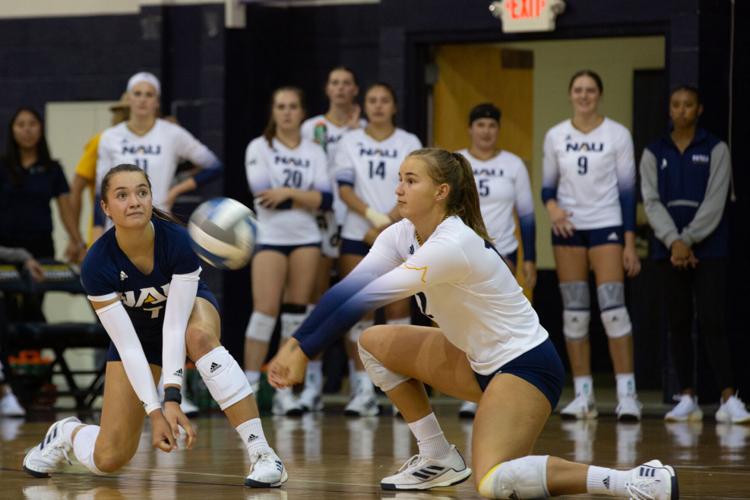 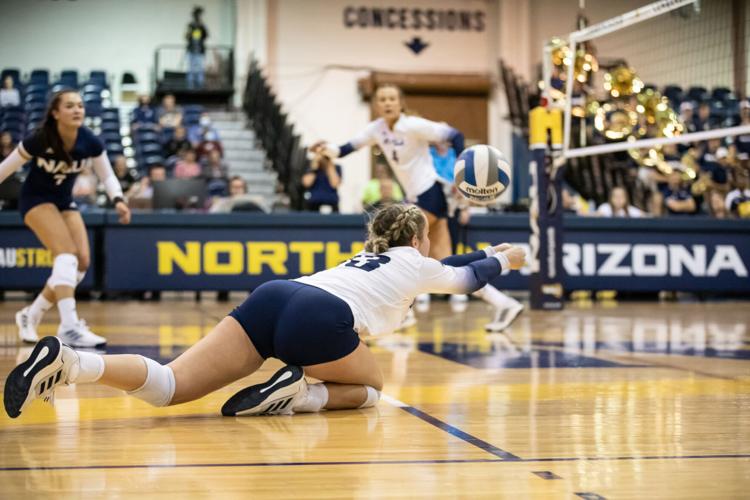 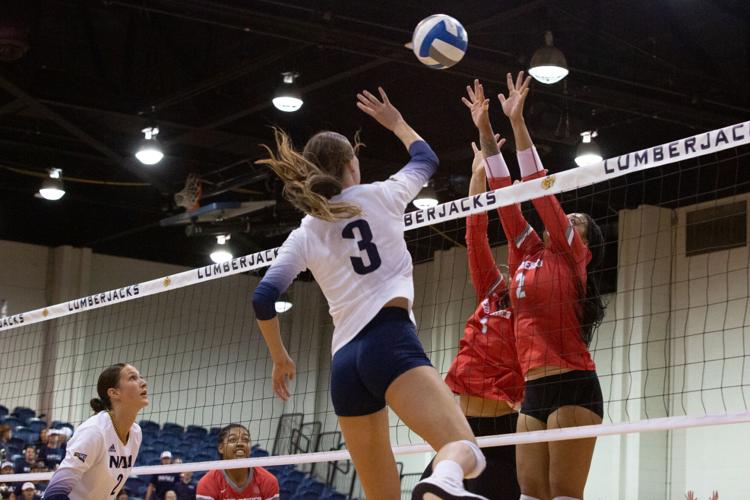 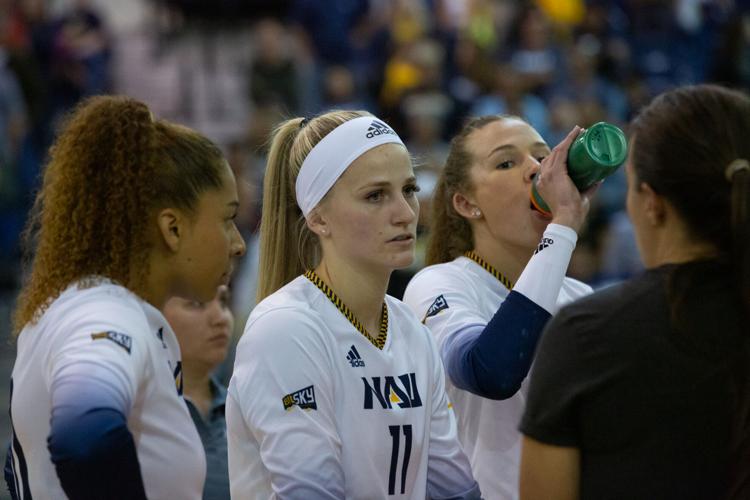 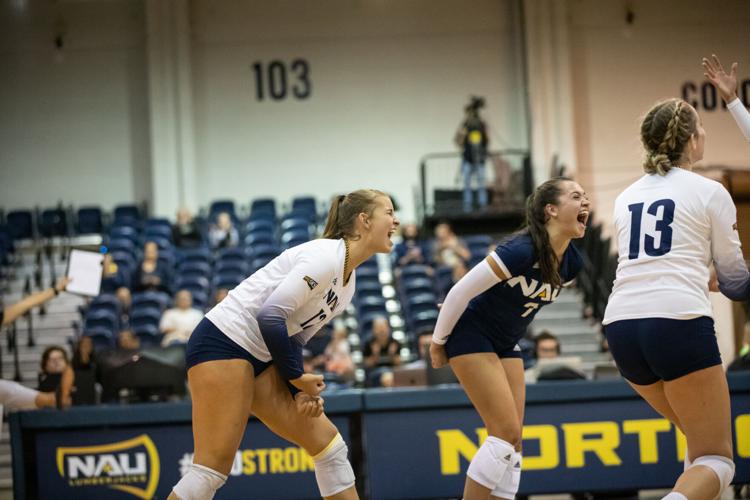 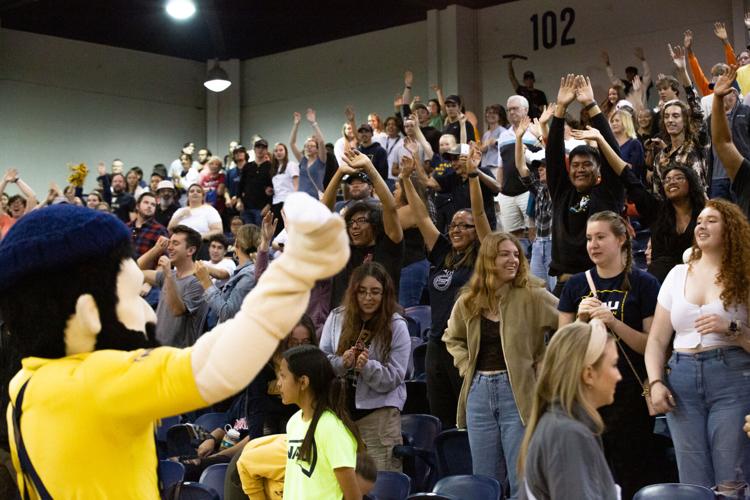 Crowd members stand and shout to get Louie’s attention for a chance to get thrown a shirt, Sept. 16. 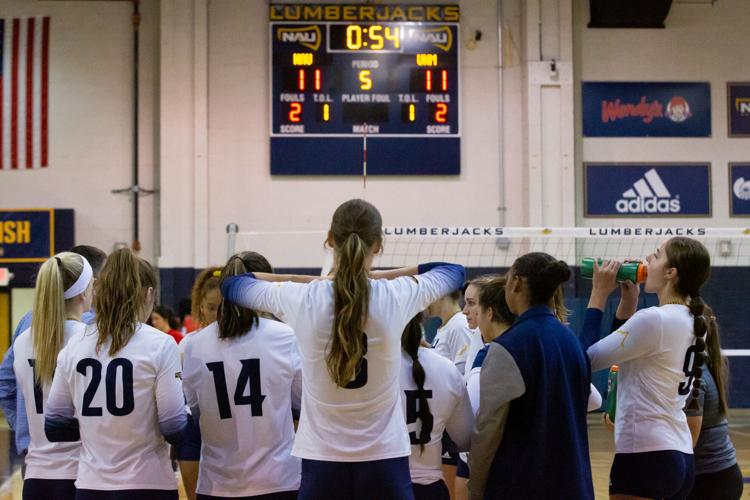 NAU calls a timeout during a tied last match against UNM, Sept. 16. 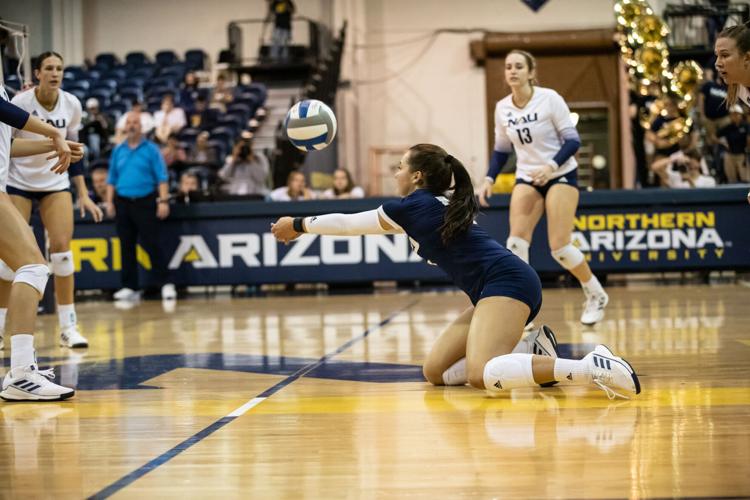 Junior libero Millie O'Ketter (7) dives for the ball during the fourth set against UNM.

Crowd members stand and shout to get Louie’s attention for a chance to get thrown a shirt, Sept. 16.

NAU calls a timeout during a tied last match against UNM, Sept. 16.

Junior libero Millie O'Ketter (7) dives for the ball during the fourth set against UNM.

Coming into this matchup between NAU and New Mexico, the Lobos were the favorite with a 7-1 record, while the Lumberjacks were 1-5 coming into this game as the underdogs. It is the last game of NAU’s schedule before its conference games, and a win would start it off right, this was also New Mexico’s final game before conference play. NAU played a solid game, and their defense was a factor in why the match went to the bitter end. New Mexico’s offense was more electric and outplayed NAU’s defense, leading to a final of 3-2 for New Mexico.

Senior outside hitter Taylor Jacobsen joined the 1000-career kill club with a career-high 27 kills in the match. Jacobsen is now only six kills away from being in the top 15 for most kills in school history.

“Awesome, that's something that I've been striving for since my sister is in that club too, but like everyone always says in interviews, I couldn't do this without my teammates,” Jacobsen said.

NAU started the first set with a good rally that went back and forth for a long while before scoring the first points of the match. New Mexico’s passing in this set was spectacular and led to a lot of points. The Lumberjacks came back and got more intense on both offense and defense to tie it up at 15. Both teams kept going back and forth, to make it 23-22 in favor of New Mexico until the Lobos double-faulted twice in a row to give NAU a 24-23 lead. New Mexico tied it at 24 before NAU took a one-point lead. There was a close call that was challenged by NAU Head Coach Ken Murphy to overturn a point for New Mexico, but the call stood. The Lobos won the first set by scoring three points in a row to win, 27-25.

New Mexico started the second set strong with some good energy as it once again went back and forth between the Lobos and the Lumberjacks, the latter eventually taking a good-sized lead at 11-7. New Mexico brought some intensity and made it close with their defense stepping up to pull within one point. The Lumberjacks hung onto the lead for a few rallies until New Mexico tied it up at 13. NAU took the lead and continued with it while New Mexico scored a few, it was 19-17 NAU. The Lumberjacks got up to 22 points thanks to some great defensive plays, but New Mexico tied it back up. NAU went on to extend the lead and win by getting three in a row to win 25-22.

NAU jumped out to a 3-1 lead to start the third set. New Mexico kept the set close with some incredible plays. New Mexico battled back to lead 17-16. Some spectacular kills helped NAU take back the lead 21-19. NAU went up 23-22, only needing two points for the set win but New Mexico tied it up at 24. NAU took a 25-24 lead but New Mexico came in clutch scoring three straight points to take the set 27-25, taking a 2-1 match lead.

New Mexico started the next set with a 2-0 lead. Both teams fought back and forth but NAU established a 15-13 lead going into a media timeout. A couple of good hits put NAU up 17-13. However, NAU gave up leads in each of their two set losses so it was still anyone’s game. NAU continued to keep its lead at four getting to 19-15. A long rally brought New Mexico within three. New Mexico made a comeback making it 20-19, trailing by just one. NAU got on a roll on offense and capped the set with a 25-20 victory, tying the match.

The intensity ramped up with the match on the line in this fifth and final set. New Mexico started with a 5-2 run. It was a defensive set early with some great blocks and digs. It seemed the first team to fall short defensively was going to be the team to lose. New Mexico took the advantage early, keeping in front 8-5. NAU got in some great shots but New Mexico’s defense kept rallies going. New Mexico could not hold off NAU forever and the Lumberjacks tied the set at 11. Some exciting rallies lead NAU to a 13-12 lead, just needing two points to claim victory. It was tight as both teams battled back and forth but New Mexico won the set and the match.

As both teams enter conference play, New Mexico is looking good after coming off of an 8-1 record. NAU is going into the conference schedule with a 1-6 record, but Thursday night showed they are capable of winning matches.