Skip to main content
You are the owner of this article.
Edit Article Add New Article
You have permission to edit this article.
Edit
Home
News
Opinion
Features
Culture
Sports
Multimedia
Gallery
PRINT EDITION
Search
1 of 2 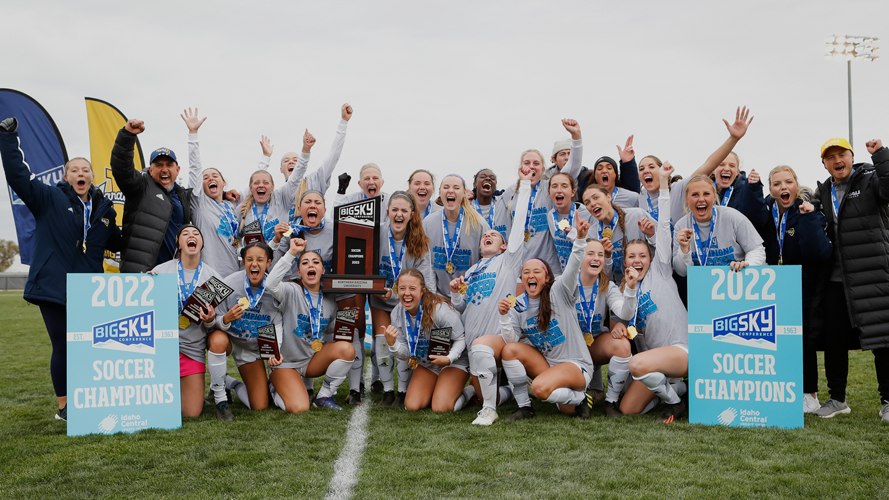 The NAU soccer team poses with the Big Sky soccer trophy after winning the tournament on Nov. 6, 2022 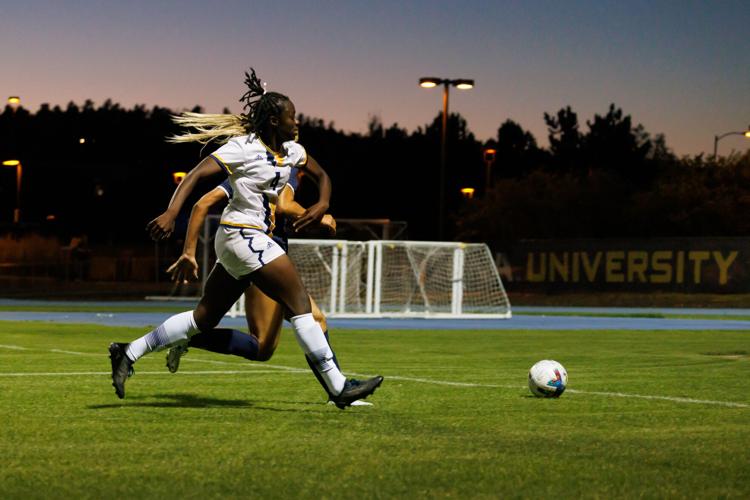 The NAU soccer team poses with the Big Sky soccer trophy after winning the tournament on Nov. 6, 2022

NAU played the No. 1 seeded UCLA Bruins in the first round of the NCAA Women’s College Cup and fell 4-1. After defeating the Lumberjacks, UCLA went on a run through the tournament, beating Central Florida, Northwestern, Virginia and Alabama on its way to the championship game. UCLA came back against No. 2 seeded North Carolina and won in double overtime, 3-2.

NAU finished the regular season 8-5-4, ending the year on a seven-match, in-conference win streak, capping its conference schedule 7-1. With the Lumberjacks claiming their first Big Sky regular season title since 2010, they will get to host next year’s Big Sky Conference Tournament. Northern Colorado held that privilege this season as last year’s regular season champions despite missing the tournament this season as they finished in the bottom three in the conference. It was NAU’s second-ever regular-season title.

Early in the year, it looked like NAU could be one of the bottom three teams in the conference. It took NAU nearly a month into the season for the Lumberjacks to notch their first win, starting the season 0-4-2.

On Sept. 15 against NAIA Ottawa University (AZ), NAU released its frustration, setting a program and conference record for goals scored in a match, with a whopping 11-0 victory over the Spirit for the Lumberjacks first win of the year. Five NAU players managed to score two goals in the match.

One of those players was Big Sky 2022 points leader, junior midfielder Maddie Shafer. She finished the season tied for the Big Sky assist lead with six and tied for third in the conference in goals with five, a point total of 16.

Junior forward Josie Novak also had two goals against Ottawa and finished with the team lead and second in the Big Sky in goals with six on the season. Only Montana’s sophomore forward Delaney Lou Schorr had more in the conference with seven.

Following the win, NAU drew its next two matches on the road against California schools and lost its conference opener 1-0 at Weber State.

Over that time, NAU head coach Kylie Louw had been quietly missing from the sideline. It was first mentioned — only briefly — that she was not with the team on the broadcast at Loyola Marymont, the first of the California road matches. Louw was not seen the rest of the season as NAU Athletics announced in early October that she had been placed on administrative leave with no additional comment.

Associate head coach Alan Berrios took over the program following the win against Ottawa and once the Lumberjacks found their stride, they never looked back.

Following the loss to Weber State, NAU won each of its final seven matches and Berrios was named Big Sky Coach of the Year. He was the first NAU coach named conference coach of the year since Andre Luciano was given the award in 2008 and 2009.

After only scoring seven goals in its eight non-conference matches, not including Ottawa — but you could include Weber State for a scoreless ninth match — NAU scored 12 goals over its end-of-season seven-match winning streak.

Shafer was named first-team all-Big Sky and Novak was an honorable mention.

Aside from the first two matches of the season in which it gave up five goals, NAU’s defense was stellar throughout most of the year. Each of NAU’s regular- season losses came by one goal, and NAU was held scoreless in two of those losses. NAU posted nine clean sheets on the year, six came during the streak.

NAU’s 2021 starting goalkeeper, sophomore Natalie Manzo missed most of the season, and NAU looked to sophomore Trinity Corcoran in her place. Early in the season Northwest Missouri junior transfer Ashley Williams competed for the starting spot but she was beaten out by Corcoran after allowing multiple goals in a few games.

Corcoran finished the season with 16 games played, 15 of which she started. She posted nine complete match shutouts, including a 110-minute shutout and penalty shootout win in the Big Sky championship. She’s now tied for the fourth most shutouts in a season in school history.

With 69 saves and 10 goals allowed, Corcoran had the highest save percentage in the Big Sky and was named to the all-conference second team. The 10 goals allowed are the third least in a season in school history by a goalkeeper that played at least 500 minutes. Her .67 goals-against average was also the third-lowest in a season in program history.

Maszton was in her second season at NAU after transferring from Ottawa University and formerly playing at Glendale Community College. After making 14 appearances off the bench as a junior she appeared in 19 matches, starting 17 this season. Her 1,541 minutes were the third most of any Lumberjack and she served as a huge defensive piece for NAU.

Donathan started 51 of her 62 career matches at NAU and had five shots on goal and an assist in 2022. She played a career-high 1,430 minutes, capping her career with 4,622 minutes.

The late-season run catapulted NAU to the top of the conference through adversity and NAU was granted a first-round bye in the conference tournament as one of the top two seeds in the six-team field. NAU played Weber State in the semifinal as the No. 5 seeded Wildcats upset the No. 4 seed Sacramento State 4-2 in penalty kicks in the first round.

That ended up being the story of NAU’s side of the bracket as Weber State also took NAU through extra time and into penalties tied 1-1. NAU took the shootout

4-2 to advance to the championship for the second time in three seasons.
The 2020 season was moved to spring 2021 due to COVID-19. After beating Idaho in the semifinal, COVID protocols within the NAU program forced the Lumberjacks to concede the championship match, and Montana was awarded the Big Sky Championship.

NAU got its chance at redemption this season and pulled through in a rematch against Idaho, this time in the championship.

Gridlocked at zero through 110 minutes, NAU faced another penalty kick shootout. The Lumberjacks exorcised their past demons, pulling through 4-3. The win marked NAU’s fourth Big Sky title in program history and its first in eight years. Though faced with a tough first-round NCAA matchup, the season overall was a massive success for the program.

Though there will be some key departures, especially defensively, with a lot of experienced seniors on the roster, NAU seems to always compete near the top of the conference even if there is an occasional down year, the low times have not seemed to last as the program has not had back-to-back in-conference losing seasons since 2001-2002. NAU has a consistent culture of competing.

Graduate midfielder Mikhail Johnson led NAU in minutes played this season with 1,707 minutes while starting and playing in 19 matches. Johnson was a transfer from NC State and started 35 matches for NAU over two seasons. She scored three goals all of which came in 2021, but she did put ten shots on goal this year.

Senior defender Rylie Curran was named all-conference honorable mention. Curran appeared in 61 matches over four seasons for NAU and was second on the team in minutes in 2022. She landed two of her four shots on goal in 2022 and recorded two assists.

NAU will need to look to some of its younger upcoming talent to mitigate the loss of some of these heavily experienced players. They have often found players to step up when it is their time.

This season there were some younger players who managed to step up and make a difference in the opportunities they were given.

One of the most impactful young players on the team this season was freshman midfielder Avery Ott. Ott played 1,218 minutes and scored four goals with one assist in her first season. She played the most minutes of any freshman, appearing in 18 matches, 16 of which she started. Ott’s 19 shots on goal were the fifth most in the conference.

Junior forward Allison Veloz made an impact in her first season with NAU after transferring from Long Beach City College. She appeared in 19 matches, playing 1,040 minutes in 12 starts. Veloz finished the year with 11 total points off of four goals and three assists. Of her 29 shots taken, 15 landed on target. She was named all-conference honorable mention.

NAU will have some offensive creators to rely upon going forward, but new faces on the defensive side if the team is to continue its success and build off of this past season. A conference championship is no small feat, and the 2022 NAU soccer season will be one to never forget. Through the ups and downs, it was possibly the best season in program history.

Embracing snow: How to beat the winter blues