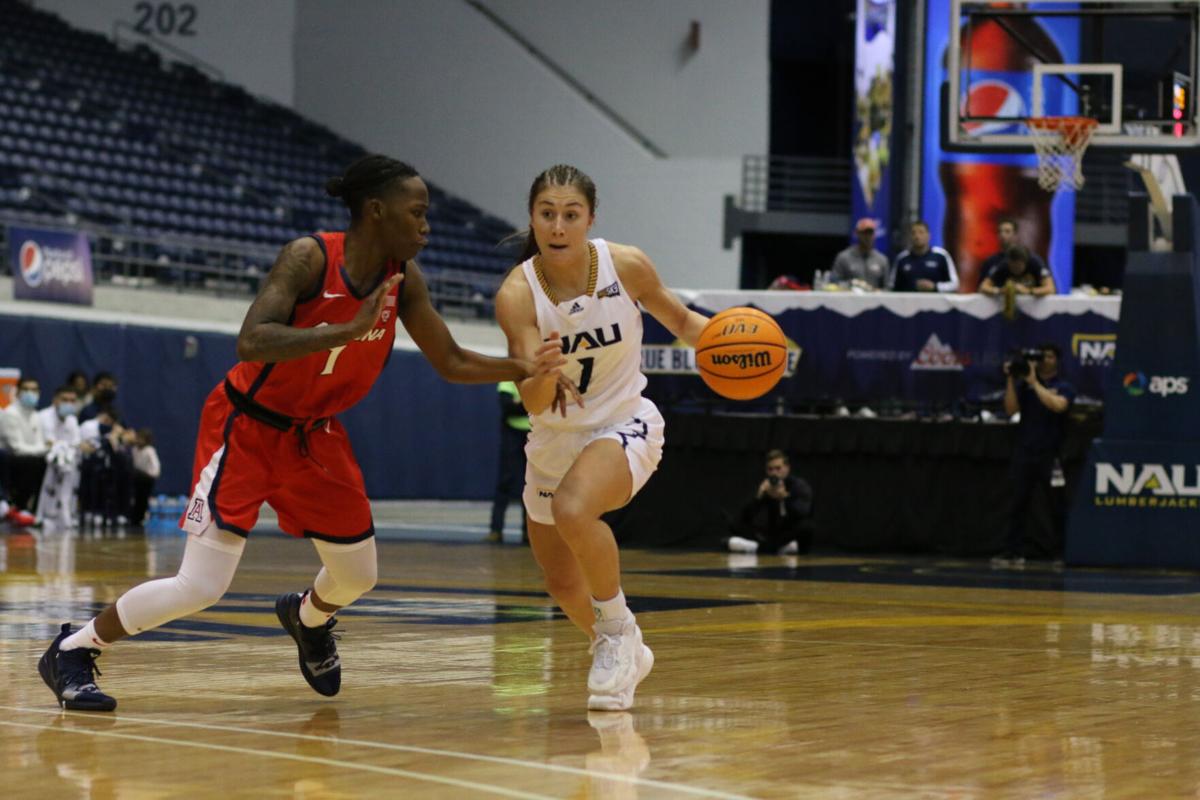 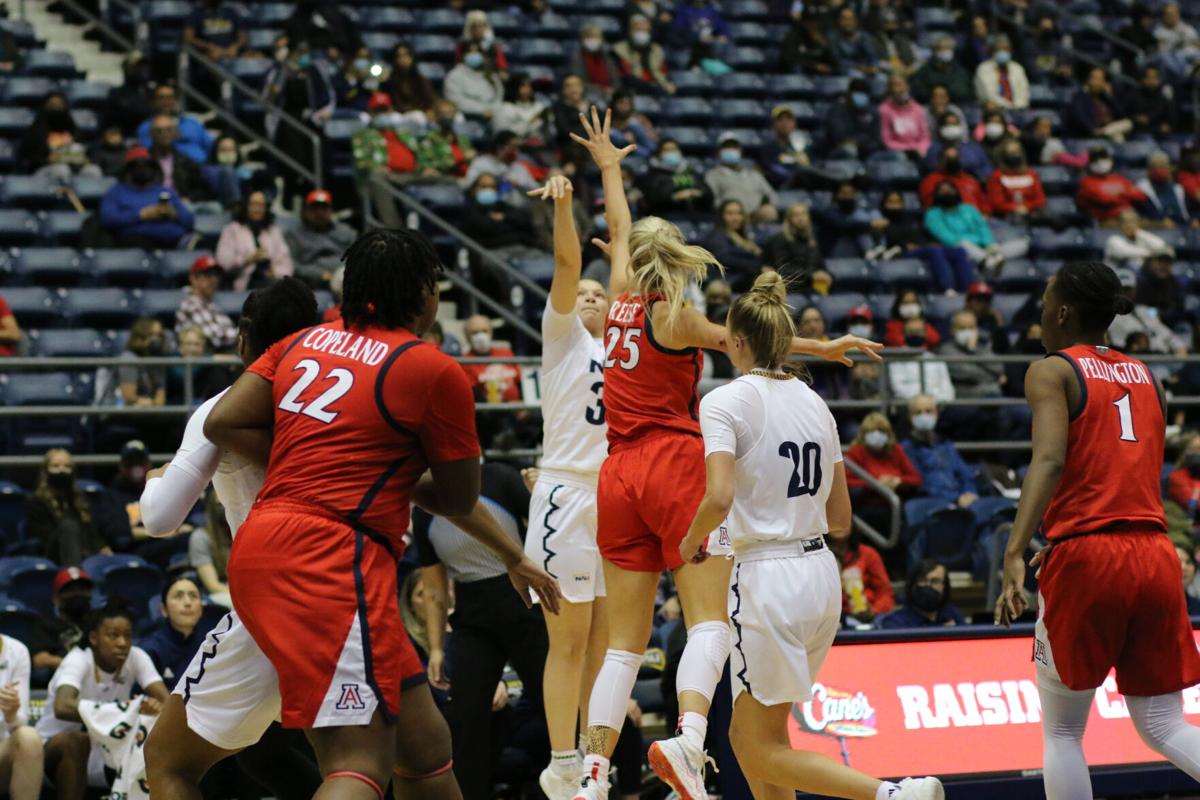 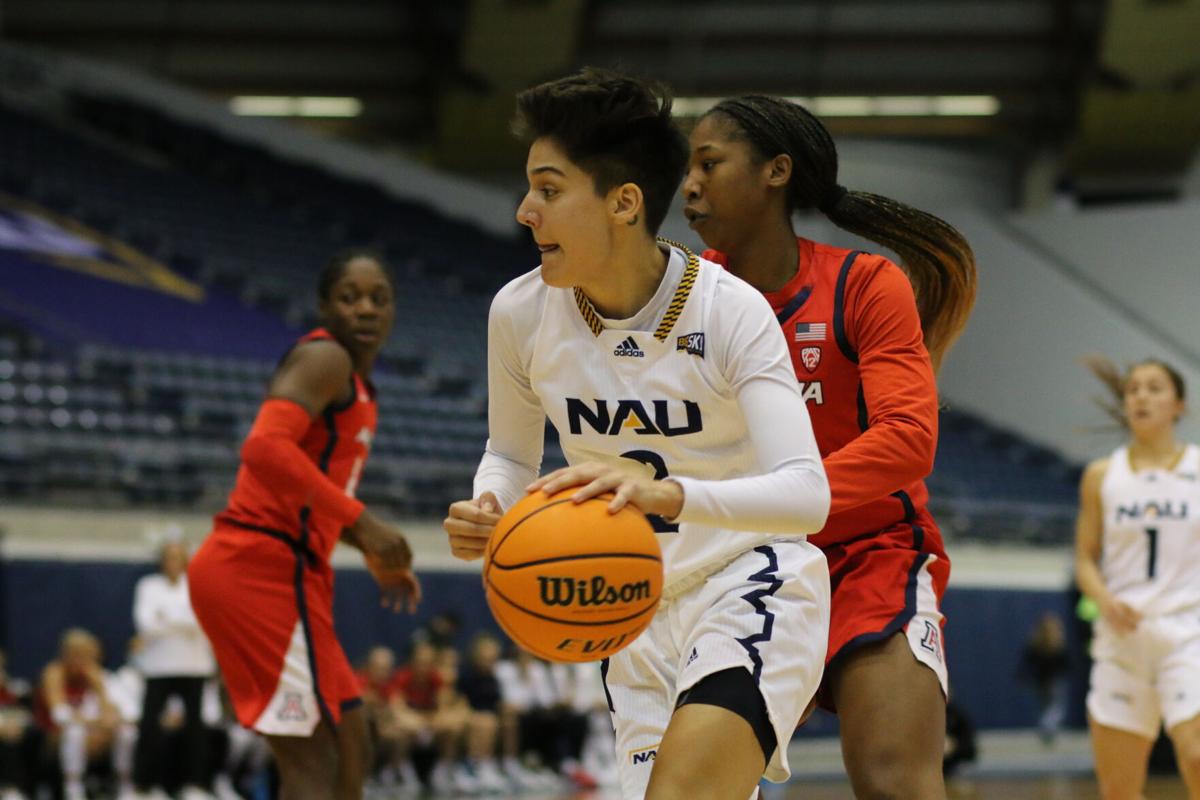 NAU welcomed No. 4 UArizona to the Walkup Skydome for the first game in the stadium since March 4, 2020. However, the Wildcats took that invitation and took over the party with an astonishing 82-55 victory over the Lumberjacks.

Right from the opening tip — which the Wildcats won — it was clear NAU would not be able to compete against the bigger, faster and stronger UArizona team that made the National Championship game last season.

UArizona opened up with an 8-0 run that lasted over the first three minutes of the game. NAU didn’t change the scoreboard until sophomore guard/forward Emily Rodabaugh hit a nice floater off a hesitation move-in transition.

The Lumberjacks had the ball stripped and swiped from them before they reached the halfcourt line more often than NAU head coach Loree Payne would have liked.

“They’re so big at the guard position,” Payne said. “A lot of times what we’ve been getting away with — being able to pass over even against GCU who pressures — I thought our passes were able to get through. But when you have six-foot guards that are super athletic… that’s just intimidating.”

Size played a major role in UArizona’s domination across the board. The Wildcats pulled down 36 rebounds compared to the Lumberjacks’ 29.

The final part of the first quarter didn’t go any better for NAU. After Rodabaugh’s floater, the Wildcats went on a game-best 15-0 run that lasted a span of fewer than two minutes. In the blink of an eye, the Wildcats were up 25-2.

NAU scored a quick five points to end the quarter thanks to a 3-pointer from senior guard Miki’ala Maio and a layup by senior guard Lauren Orndoff.

UArizona came out just as strong in the second quarter with a lengthy six-point run. With the game blown wide open, the nationally-ranked Wildcats brought in their bench players to seal the deal. UArizona’s starting five played a combined total of 59 minutes while the bench racked up 140 minutes of playing time.

Leading the bench charge for the Wildcats was freshman forward Aaronette Vonleh who was the only player in double figures with 11 points at halftime. Her 17 points in 25 minutes played easily surpassed her previous career-highs of 14 points and 18 minutes she earned against Cal State Northridge and Texas Southern respectively.

Halfway through the second quarter, NAU was down 43-12 after a UArizona 18-5 run. However, the Lumberjacks would begin to find their stride with an 8-0 run to end the half.

The paint presence of the Wildcats was too much for the Lumberjacks to handle. UArizona scored 52 points in the paint as opposed to NAU’s 18.

The Lumberjacks were able to slow down the pace that the Wildcats were forcing as the second half progressed. With UArizona’s complete control of the paint, NAU spaced out the floor and looked towards its guards to shoot the ball. NAU only put up three 3-pointers in the first half and needed much more to close the gap.

Redshirt junior guard Nina Radford didn’t attempt a single shot in the first half in 13 minutes of on-court time. Her first attempt would come with 7:40 left in the third quarter where she drained a 3-pointer. She would hit a jumper that led to a UArizona timeout with the Wildcats leading, 54-31.

Radford, who averages over 10 points per game and has hit over 50 percent of her 3-point attempts this season, only scored five points on 2/3 shooting.

Guards were an issue for coach Payne in a game where UArizona’s post play was not going to be beaten. The three guards that NAU started, Maio, Orndoff and junior Regan Schenck combined for a total of seven points on 3-for-12 shooting.

Schenck was held to zero points for the second time this season as she went 0/3 from the field in 25 minutes of play. She also committed a team-high five turnovers out of NAU’s 22 turnovers.

“I was talking to our staff and I ask who else can help take that load off with handling the ball because right now I don’t feel like we are making great decisions from that guard position,” Payne said. “We need someone to be able to step up and handle the pressure and the composure and understand to push when we need to push and hold back and set something up when we need to.”

The Lumberjacks held off the Wildcats for the majority of the third quarter, holding them down to a team-low 16 points. However, UArizona did end the quarter on a 6-0 to put the game away.

Halfway through the fourth quarter, the Wildcats had outscored the Lumberjacks 15-5, but NAU found one last breath to make a quick run at the end of the game. UArizona led by as much as 36 points with less than two minutes remaining in the game but NAU cut the lead down thanks to a 9-0 run that came entirely from 3-pointers.

NAU went 5/6 from distance in the fourth quarter, including two from Rodabaugh who ended with a team-high 13 points.

“We lost that fourth quarter by two points,” Payne said. “We only ended up getting outrebounded by seven and so those are things I think we can build on.”

Despite the loss, this game marked a huge milestone for graduate forward Khiarica Rasheed. Coming into the game, Rasheed was tied with Sade Cunningham for the most games played by an NAU women’s basketball player at 123.

By playing today, she became the sole owner of that record.

“It’s crazy because without COVID, I wouldn’t have been able to do this,” Rasheed said. “We don’t like COVID, but just being able to come back and finish it out, I’m appreciative of that because it all could have ended last year.”

Due to COVID, the NCAA allowed players to have an extra year of eligibility. With this added time, Rasheed was able to play her 124th game on Saturday. She made her collegiate debut on Nov. 10, 2017, against UC Santa Barbara.

That game was also Payne’s coaching debut at NAU.

“Before this is all said and done she is going to break more records,” Payne said. “She is someone who has been here my whole career. I got hired when she was going to be a freshman so we’ve been through it. We’ve been through the goods and the bad. I am just very, very impressed with her character and her integrity and the injuries that she’s fought through. She could have absolutely walked away at any point dealing with all the adversity that she’s dealt with.”

NAU (5-5, 2-0 Big Sky) will look to learn from this loss as it will finally hit the road after a six-game homestand. It will head to La Jolla, California to take on the UC San Diego Tritons (3-6, 0-0 Big West) on Tuesday at 5 p.m. MST in what will be the Lumberjacks’ first road game since Nov. 20 against UTEP.