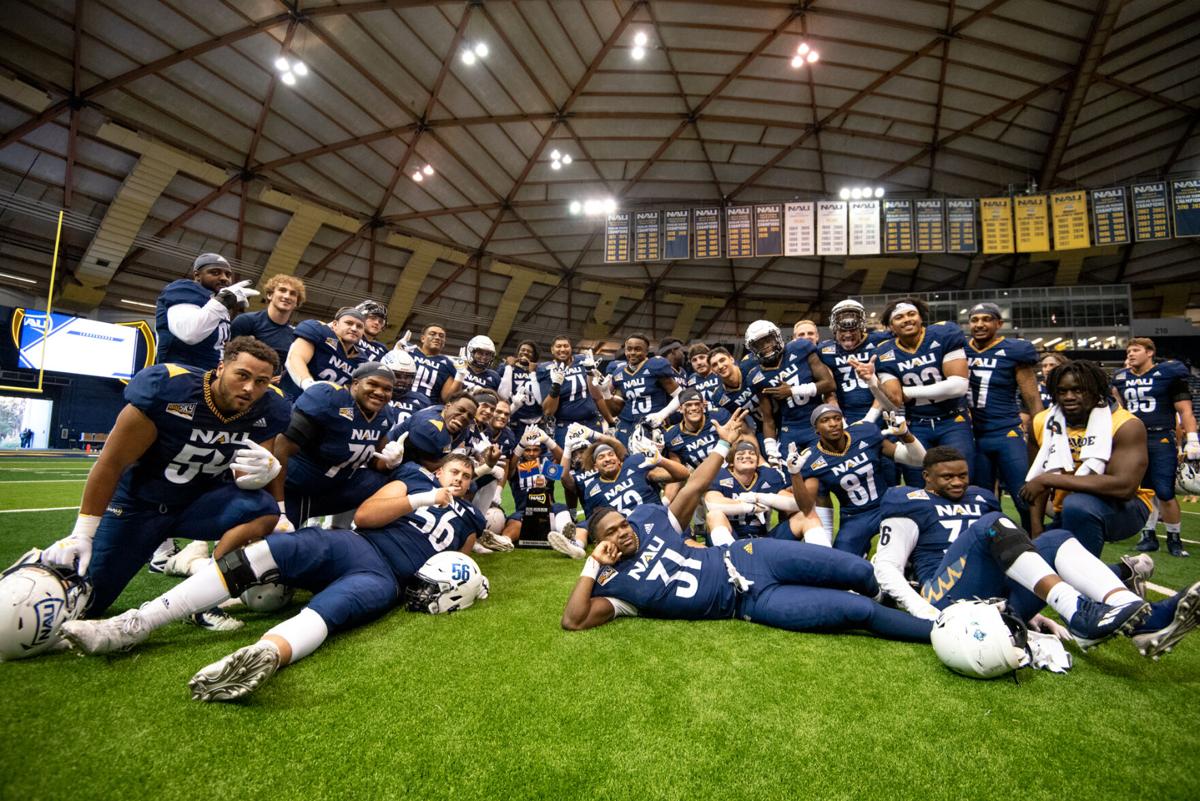 The Lumberjacks pose for a photo with the Grand Canyon trophy after defeating the Southern Utah University Thunderbirds 59-35 at the Walkup Skydome, Oct. 16. 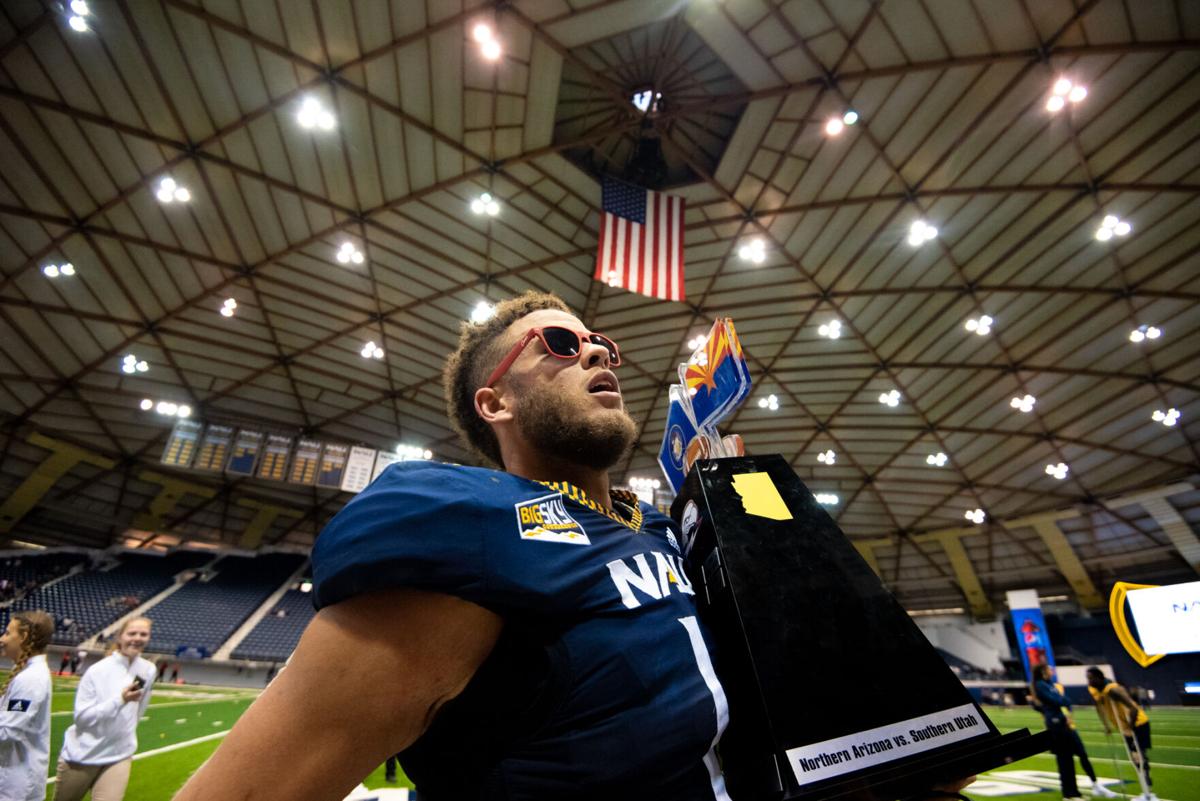 The Lumberjacks pose for a photo with the Grand Canyon trophy after defeating the Southern Utah University Thunderbirds 59-35 at the Walkup Skydome, Oct. 16.

Defense was hard to come by as the Lumberjacks put up 59 points in a decisive 59-35 Grand Canyon Rivalry game win over Southern Utah on Saturday.

NAU jumped ahead early, finding the end zone on its first two drives of the day to take a 14-0 lead just seven minutes into the game. The Lumberjacks dominated the first half on offense, scoring four touchdowns and a field goal on five of their seven drives.

After Southern Utah punted on its opening drive, the Lumberjacks drove 80 yards on their first possession of the game, thanks in large part to a 75-yard catch and run by redshirt freshman receiver Coleman Owen and capped off by a one-yard touchdown run by freshman quarterback RJ Martinez.

Martinez came out throwing to start the game, completing a 45-yard pass to sophomore wide receiver Hendrix Johnson to go along with the 75-yard hookup between him and Coleman. The Lumberjacks put up three plays over 20 yards in the first quarter alone.

The freshman quarterback carried his hot start through all four quarters, completing 23 of 29 passes for 417 yards and five passing touchdowns, in addition to two more on the ground.

NAU head coach Chris Ball had nothing but praise for his young quarterback.

“Each week he’s gotten better,” Ball said. “He’s 18-years-old playing quarterback in the Big Sky, that’s not an easy thing to do. [He has] great character, he’s smart, he’s mentally tough, has a great work ethic and he’s talented.”

Following another fumble, this time forced by graduate linebacker Tristen Vance, the Lumberjacks completed a six-play, 65-yard drive with a touchdown pass from Martinez to freshman running back Draycen Hall to extend their lead to 24-0.

After a poor first quarter, the Southern Utah offense began to show signs of life midway through the second quarter, finding itself on the Lumberjack six-yard line with 6:58 remaining in the first half. After a NAU offsides penalty moved the ball to the four-yard line, the Thunderbirds finally got on the board with a touchdown run from Miller.

The Lumberjacks responded swiftly with a 73-yard catch and touchdown run by Johnson on the second play of the drive, scoring in 41 seconds to make their lead 31-7 with just under five minutes left in the first half.

Even with their offense starting to wake up, Southern Utah’s defense couldn’t stop the Lumberjacks from scoring — a theme that continued throughout the game.

NAU started the second half the same way as the first: A touchdown pass from Martinez to Coleman — their second of the day — good for 22 yards on a seven play, 75-yard drive. Owen finished the afternoon with nine receptions for 163 yards to go with his two touchdowns.

Owen highlighted Martinez’s work ethic as a major reason for his success.

“It’s hard not to build a connection with a guy who can put it on you wherever you are,” Owen said. “It’s crazy, [Martinez] is a guy who came in day one in the summer with the other freshman, and I think the first day he got here he was throwing with us. He’s one of the hardest working guys we have, he’s super smart and it’s just really easy to build a connection with guys like that.”

Southern Utah responded by putting together back-to-back touchdown drives to cut NAU’s lead to 38-28 with 5:58 left in the third quarter, but thanks to a one-yard rushing touchdown by Martinez, the Lumberjacks widened the gap again, 45-28.

The Thunderbirds again attempted to make a comeback, scoring another touchdown to slice the Lumberjack lead back to 10 points, but freshman running back Kevin Daniels squashed all hope with an 86-yard touchdown run to put NAU on top 52-35. Daniels had a huge day on the ground, finishing with 19 carries for 229 yards and a touchdown.

After a SUU missed field goal, the Lumberjacks added another touchdown when Martinez found Johnson for their second touchdown of the game, this time a 23-yard pass to make the final score, 59-35, in favor of NAU. Johnson finished with five receptions for 174 yards and two touchdowns.

Johnson also praised Martinez, highlighting how lucky the Lumberjacks are to have the young quarterback leading their offense.

“It’s really easy when you have a quarterback who puts it right where you need it every single time,” Johnson said. “He might not even see you, but he’ll put it there just because he knows what you’re running and he knows the way you play. We’re really blessed to have this group of guys, and RJ is a great leader.”

After the win, Ball expressed how grateful he feels to be a part of the NAU football team.

“I love our players. You talk about great people, I’m absolutely blessed to be their head coach,” Ball said.

The Lumberjacks will now turn their attention to the 4-2 Sacramento State Hornets, another conference opponent. The Lumberjacks and Hornets will face off in Sacramento, California on Oct. 23, with kickoff scheduled for 6:00 p.m.