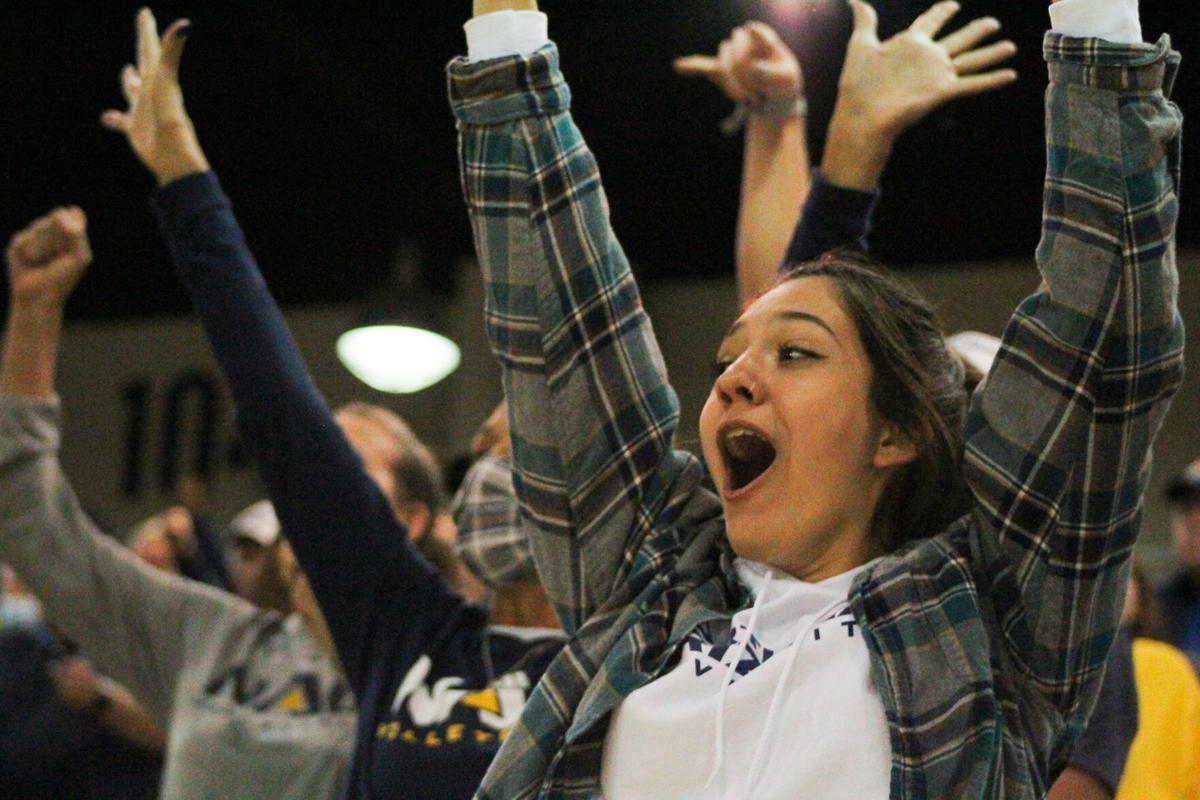 After a long rally against the Idaho Vandals, the crowd cheered when NAU scored at Rolle Activity Center, Sept. 23. 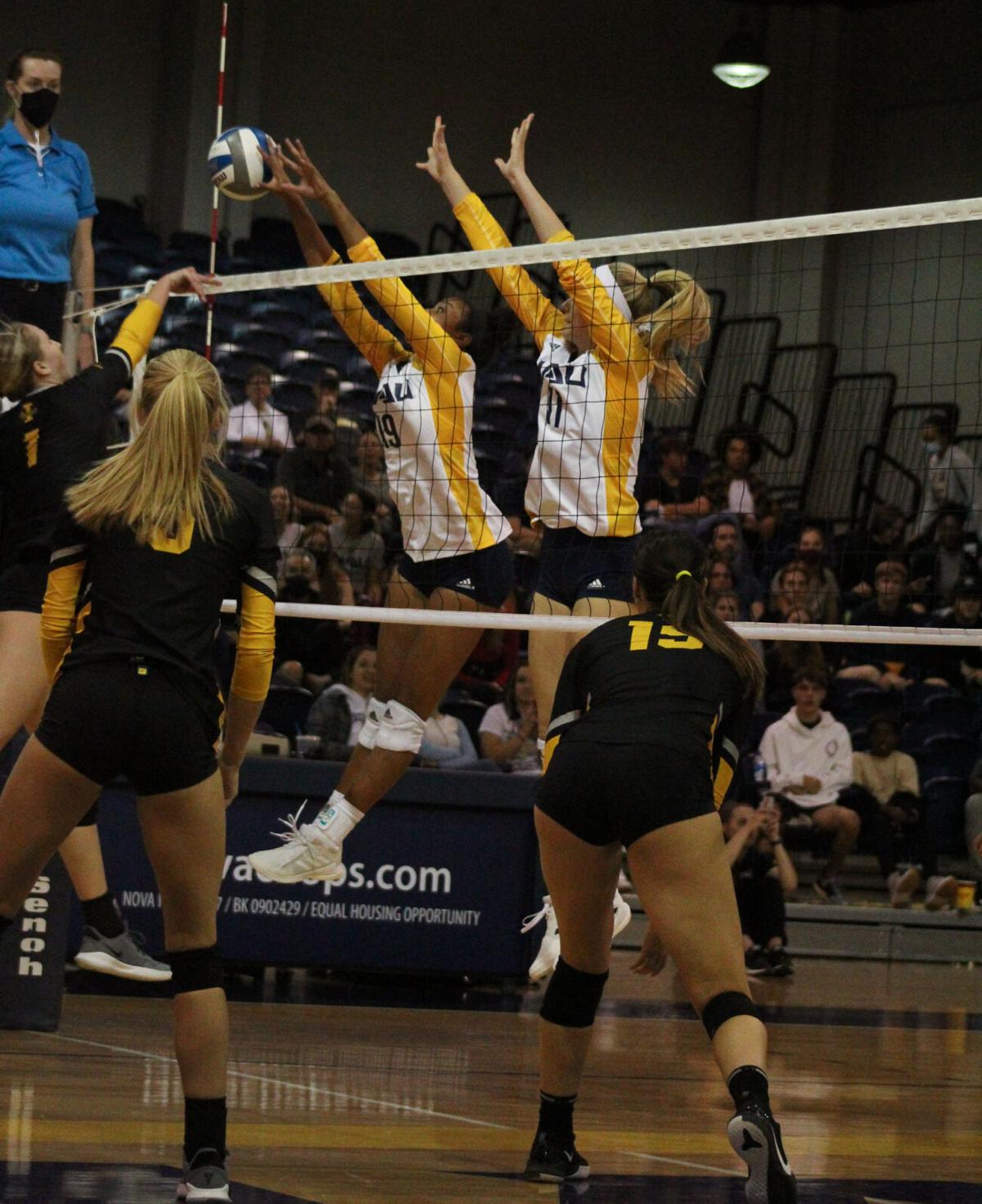 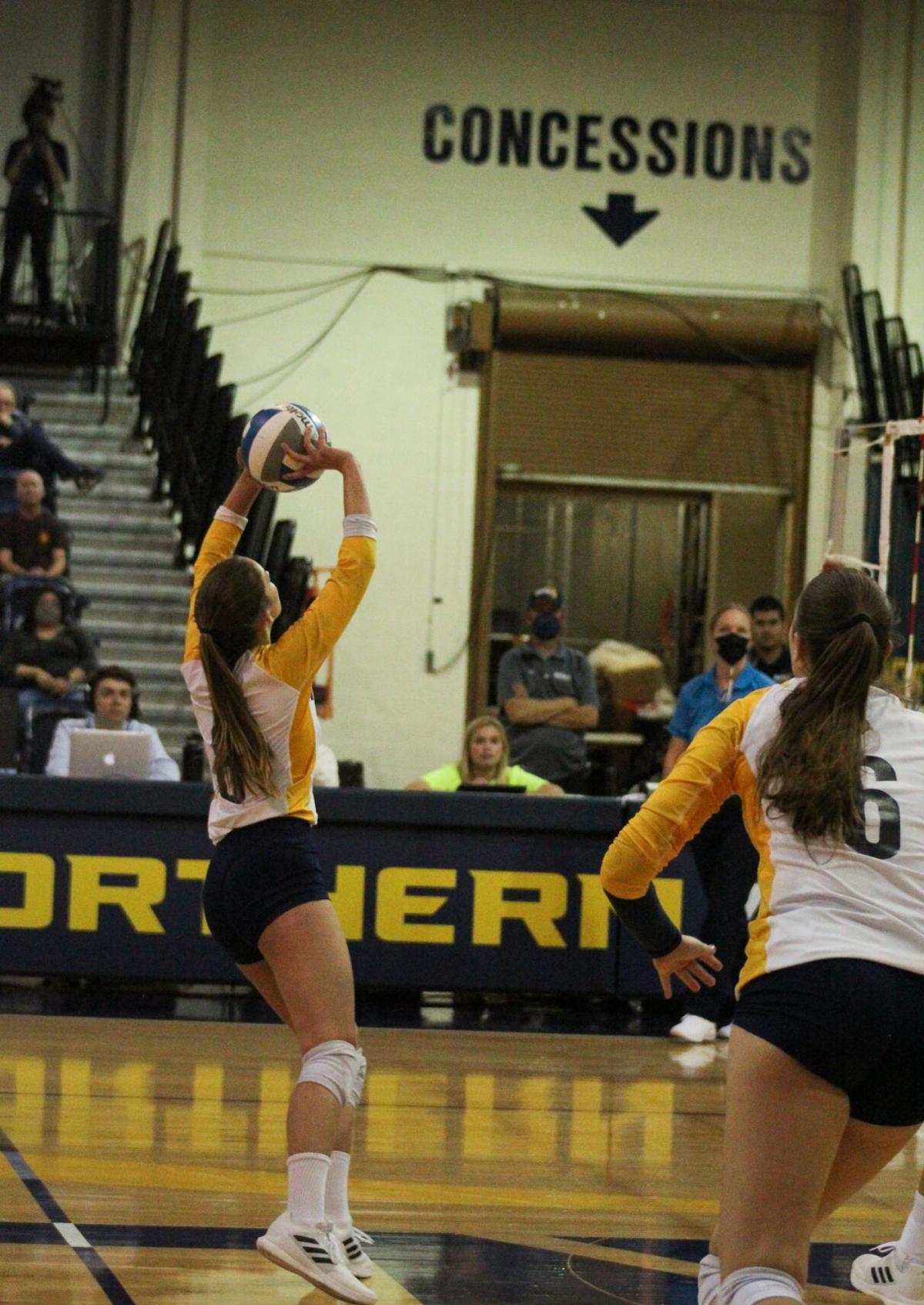 Aubrea Bandfield, 8, in the middle of an overhand receive, Sept. 23.

After a long rally against the Idaho Vandals, the crowd cheered when NAU scored at Rolle Activity Center, Sept. 23.

Aubrea Bandfield, 8, in the middle of an overhand receive, Sept. 23.

After a disappointing portion of nonconference scheduling that ended with the Lumberjacks going 2-7, NAU hit the reset button and showed the kind of Big Sky powerhouse it can be with a straight-set sweep over Idaho in its conference opener.

The Lumberjacks not only had their best outing of the season, but they did so without a valuable player. Sophomore outside hitter Lyla Hollis, who only played one set in NAU’s previous match — a loss to New Mexico on the road — was out due to a non-COVID-related illness. Coming into the match against Idaho, Hollis ranked sixth in the Big Sky Conference with 3.22 kills per set. A loss this heavy meant other players had to step up.

Without Hollis, head coach Ken Murphy and staff revised the starting lineup with redshirt junior outside hitter Morgan Gappmayer. She lived up to the expectations and scored nine kills, just one shy of her career high from earlier this season against Texas A&M — Corpus Christi. In that match, Gappmayerwas also in the starting lineup due to junior outside hitter Taylor Jacobsen being out with a shoulder injury.

Speaking of Jacobsen, she once again led the attack for NAU with a game-high 13 kills. She was the only player with double-digit kills across both teams, and also had a hitting percentage of .313.

“Taylor hit .300, but it was the easiest .300, and it has nothing to do with our opponents,” Murphy told NAU Athletics after the game. “She just has a lot of gaps and didn’t have as much attention on her as she might have had last year.”

After jumping out to a 3-0 lead in the first set, two attack errors from Jacobsen contributed to Idaho tying the set at three. However, she only had one more attack error the rest of the night, and NAU took another three points in a row to double the Vandals, 6-3. From there on, the 'Jacks never trailed, and Jacobsen’s fourth kill of the night gave them the first set.

The second set started even better for NAU. Five consecutive Idaho attack errors all began with serves from Gappmayer, in addition to a piercing kill from Jacobsen that gave the 'Jacks a 6-0 lead. The first four of those Idaho attack errors came from senior outside hitter Allison Munday.

Munday, who entered the night ahead of Jacobsen and Hollis as fourth in the Big Sky with 3.48 kills per set, struggled mightily trying to get through NAU’s front line. She had a measly five kills on top of eight total attack errors, along with a hitting percentage of -.091.

The third and final set was the most competitive of the three. NAU once again began with a slim lead, which dissolved after four unanswered Idaho points gave the Vandals a 10-8 lead. This was Idaho’s first lead in the entire match.

Both teams traded runs here and there, with three consecutive Idaho points  followed by a four-point counterattack from the Lumberjacks. With NAU holding a 22-20 lead, the team gave up consecutive service aces from Munday, which accounted for half the Vandals’ aces throughout the match. Murphy called a quick timeout to reassure the team of what was needed to close out the set and match — the first time the Lumberjacks faced any adversity.

Needing three points to win, NAU returned from the timeout strongly and forced an attack error from redshirt senior middle blocker Nikki Ball. Then, a huge kill from freshman opposite hitter Sophia Wadsworth gave the 'Jacks match point. Murphy, knowing how quickly momentum was swinging in the third set, used one last timeout to set up the final play.

“We just need more experience,” Murphy said. “In that third set we went back and forth with them for a while, [and] we didn’t side-out quite as efficiently as we did the rest of the match. It got a lot closer, but we kept our composure and relied on the things we do well.”

Ball, who came into the match with a hitting percentage of .296 — good for fifth in the conference — only hit .150 last night.

A big block from Wadsworth and sophomore middle blocker Jordan Elder put the match away as NAU won in straight sets: 25-20, 25-11 and 25-22.

“It’s satisfying to know that we can play such a complete match,” Murphy said. “From start to finish, we did a lot of good things, featured a lot of pieces of our offense and for the first time this year, really had a great defensive performance. It started with our block; our middle blockers did a great job in particular.”

Every player for NAU earned at least one kill, except for sophomore defensive specialist Millie O’Ketter. O’Ketter, who focuses on serving and digs, held the game high with 17 digs, in addition to contributing a service ace.

NAU came into conference play in last place in the Big Sky, but jumped to sixth after the first night. The Lumberjacks improved to 3-7 — 1-0 in Big Sky competition — and hope to continue on Saturday against the Eastern Washington Eagles (5-4, 1-0 Big Sky) at noon in Rolle Activity Center. Eastern Washington, currently second in the standings, won its first Big Sky match on the same night; a hard-fought 5-set match over Southern Utah (4-9, 0-1 Big Sky) on the road for the first time since 2015.