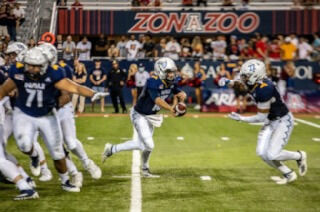 Freshman quarterback RJ Martinez (15) handing the ball off to freshman running back Kevin Daniels (22) in NAU’s 21-19 win over UArizona, Sept. 18. 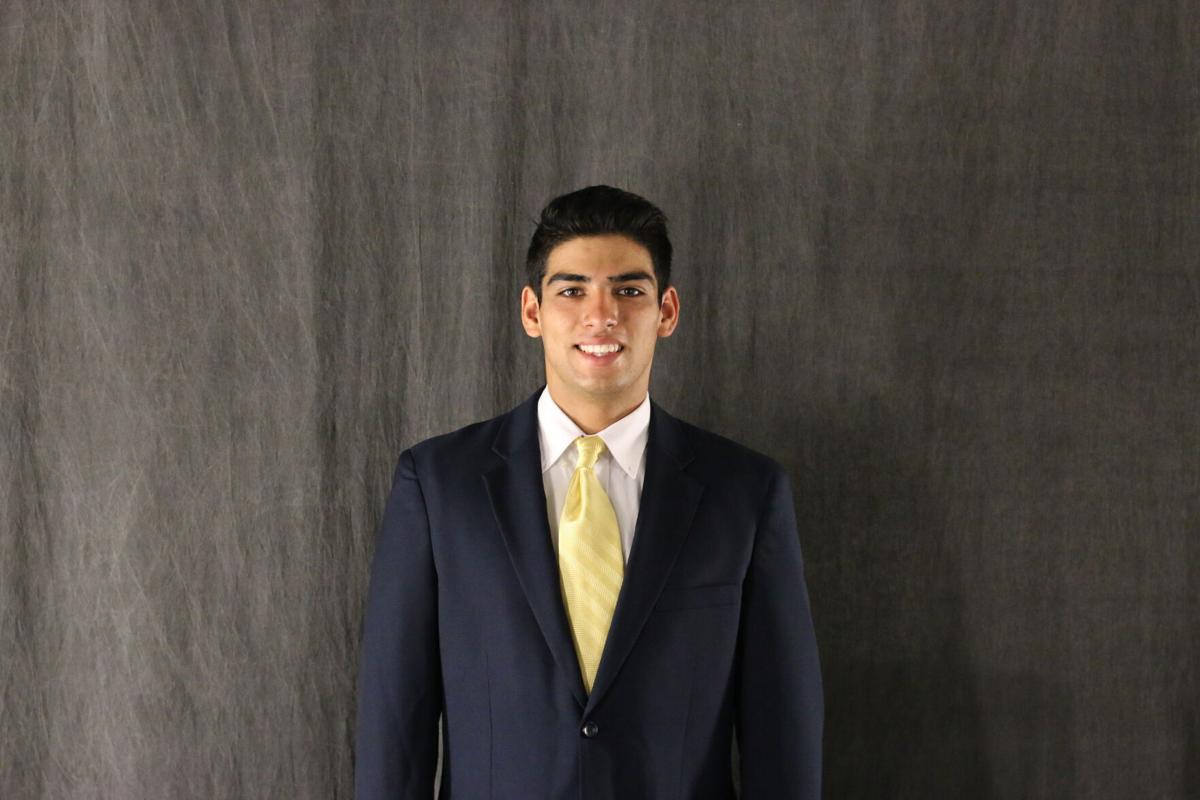 Freshman quarterback RJ Martinez (15) handing the ball off to freshman running back Kevin Daniels (22) in NAU’s 21-19 win over UArizona, Sept. 18.

NAU football has spent the majority of the 21st century in darkness. Since its last Big Sky Conference title in 2003, the team has plenty of hope, but little success. However, Sept. 18 may have marked the beginning of a long-awaited turnaround. The Lumberjacks upset an in-state rival for the first time in 89 years. In a night that saw the program snap its 14-game losing streak against UArizona, the Lumberjacks had a somewhat atypical quarterback situation. With graduate student quarterback Keondre Wudtee out due to an ankle injury, redshirt freshman Jeff Widener got the starting nod, but, in an unusual move, was not planned to take the majority of the snaps.

True freshman quarterback RJ Martinez was a successful prep player in Round Rock, Texas at Westwood High School. According to MaxPreps, he threw for over 340 yards per game as a junior with a 29-5 touchdown-to-interception ratio. That same season, he added 13 more scores with his legs, as well as over 800 rushing yards. For Martinez, the choice to play for the Lumberjacks was easy. Martinez committed to NAU early in the recruiting process, when many around him thought he could have attended a bigger school.

“RJ is capable of being successful at any level of football,” Anthony Wood, Martinez’ former coach at Westwood, said. “He’s that type of kid, and he’s that kind of athlete.”

Even with the possibility of more offers, Martinez felt confident committing to NAU.

“I had heard a lot of good things about Flagstaff, the campus and things like that … I was blown away by how beautiful this place is,” Martinez said about his decision. “Obviously the coaches played a big part in it, just their belief in me. I’m a man of faith, and a lot of these coaches are, too, so not only am I going to be a better football player here, I plan to be a better man here just because of the men I’m surrounded by.”

Even with the recruiting accolades, the freshman jogged onto the field with few expectations in a game against a PAC-12 opponent. UArizona came into the game as 24-point favorites — having beat NAU 65-41 in their previous meeting. Martinez took his first college snap trailing 13-0.

Knowing he would get the opportunity to show his ability, Martinez stepped onto the field and was confident in his ability.

“I knew I prepared pretty well throughout the week, so it was really just about getting my mind in the right frame,” Martinez said about his first in-game experience at the collegiate level.

The next drive also ended in disappointment; Martinez threw an interception while trying to find sophomore wide receiver Hendrix Johnson.

Ultimately, NAU’s defense had its first breakthrough when freshman defensive back Brady Shough intercepted an Arizona pass and took it all the way to the house, bringing the Lumberjacks within one score: 13-7.

The plan, coach Chris Ball explained, was to give Martinez the chance to take over in the second quarter — a decision they chose to stick with in the locker room at halftime. Despite his struggles, Martinez put the team in scoring position twice and, following the pick six, gave NAU the momentum to make this game special.

“It’s something that we do, [and] we did it last year with Jeff [Widener],” Ball said.

“[We’ll] schedule a series for a guy we want to get some experience with, and we just made the decision at halftime to go with RJ [Martinez].”

On the opening drive of the second half, Martinez still did not have his hero moment; instead, he needed one more drive to push the Lumberjacks into the lead. More specifically, Daniels punched the ball into the end zone on a 12-yard run, but Martinez looked just as happy handing the ball off as he would have throwing his own touchdown. This trait is common for him: Lifting others up no matter what.

Wood recalled seeing him walk through the hallways as a high school senior and telling his brother he loved him, something the coach described as “the coolest thing I had ever heard one of my players say.” Moreover, Wood thought this action best summed up Martinez’s off-the-field attitude.

Later on, Martinez found his own touchdown; a pass that hit Johnson’s hands in the end zone. Once again, Martinez was one of the first players celebrating with his teammate. This gave the Lumberjacks a larger lead, but the game had one last twist.

After a full-field drive concluded with a touchdown for the Wildcats, the game came down to a two-point conversion. Both sides knew if the Lumberjacks held their ground, it would be a historic night. The biggest win in the history of NAU football hung by a thread but, for Martinez, there was no doubt about what would come next.

“I had confidence in our defense,” Martinez said. “They had stepped up all game, [and] they had a really great week of practice, so I knew they were gonna get the stop. I never really doubted them. I know coach [Jerry] Partridge and the defensive staff had a really good game plan.”

Just as Martinez expected, the defense came up big, and the game was secured after an onside kick recovery. Both Martinez and Ball downplayed the importance of this win, but the buzz surrounding the victory was clear in Arizona and around the country. Come December, NAU’s first win this season may impact the College Football Playoff, considering the Big Sky conference secured its second win over a PAC-12 school in the young college football season.

At the center of the upset was a quarterback whose commitment to NAU came as a surprise to many, but the future is bright for this young star. Martinez may not have attended a the most prestigious football school, but the talent and character he possesses will surely be something for NAU fans to look forward to in the coming years.