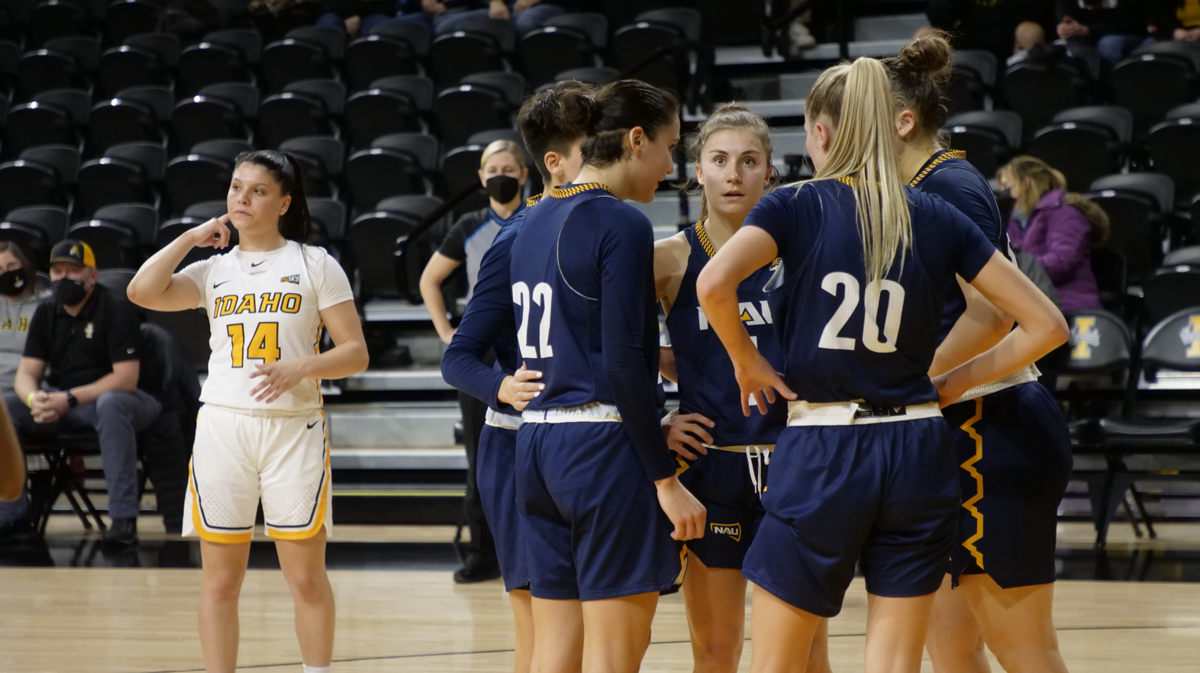 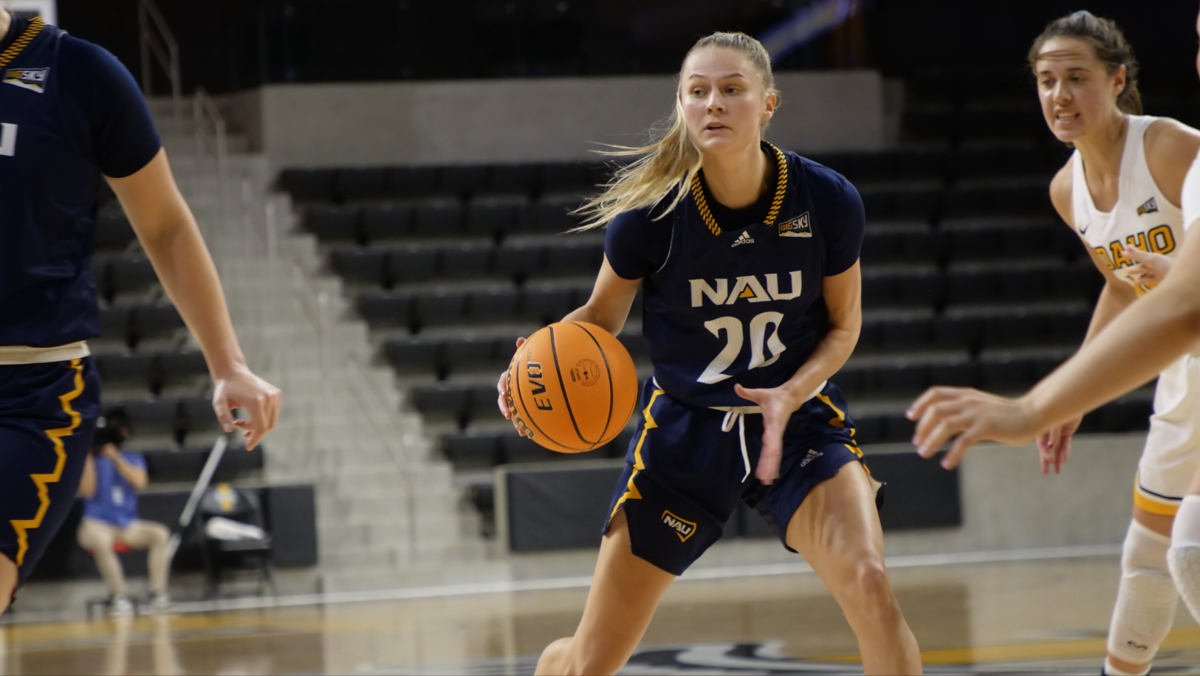 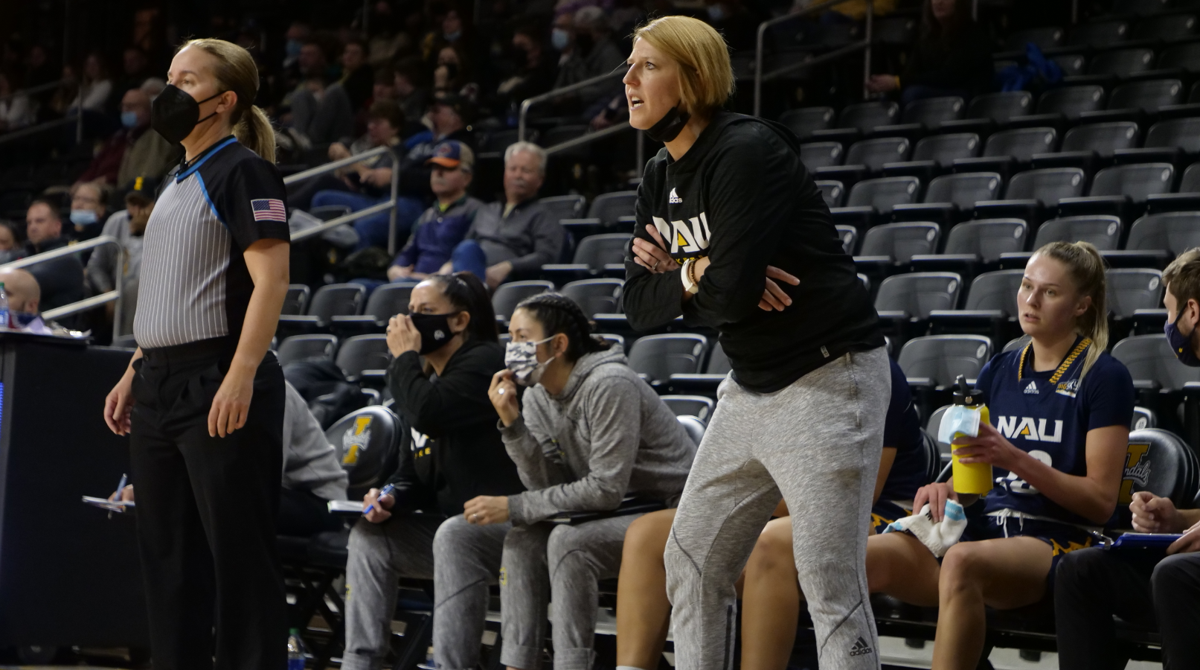 Despite only having seven of the listed 14 players available tonight, the Lumberjacks managed to come away with a big road win against a struggling Idaho Vandals squad that was at full strength, 76-63.

After four road games, NAU has finally secured its first win away from Flagstaff.

NAU, much like most teams in the Big Sky Conference and across the nation, has dealt with COVID-19 protocols that have affected schedules. The Lumberjacks’ last game on its schedule against UC San Diego was canceled a day prior due to a COVID incident with the NAU program.

“After the Arizona game, we were notified that we had been exposed,” Payne said. “At that point we knew we had a game at San Diego. We tested, we made sure that we were putting our kids in a position to stay healthy and unfortunately with this variant, it is so contagious that it spread through.”

Payne also stated that the team is fully vaccinated and many on the team have received a booster shot.

Only having two players available to come off the bench, sophomore forward Sanjana Ramesh and redshirt junior forward Sentia Bryant, NAU was forced to see its starters play a hefty amount of time. Junior guard Regan Schenck played all 40 minutes of a game for the first time this season while the other starters played no less than 33 minutes.

“These kids shouldn’t be playing 40 minutes,” Payne said. “That’s tough on them and we’re looking ahead trying to play our best basketball in March and you really can’t have kids playing 40 minutes a game if you’re going to sustain that for an entire conference season.

The Lumberjacks gave up the first points of the game a minute and a half in the game to senior guard and post player Tiana Johnson. That would be the only time the Vandals had the lead against a depleted NAU roster.

Johnson was the only Vandal to score for the first six and a half minutes as she had Idaho’s first four points. By the time someone other than Johnson scored, the Lumberjacks were leading 14-6.

All seven Lumberjacks stepped foot on the floor by the time the first quarter ended. Ramesh scored her first points of the season on a layup where she drew a foul. This became a long-running theme for NAU as the Lumberjacks shot 19 times from the free-throw line compared to the Vandals’ 12.

Bryant, who played a season-high six minutes against Arizona on Dec. 17, added four minutes to her tally.

“It was a great opportunity for them to come in and get some of that experience,” Payne said. “I’m looking forward to seeing what that will bring as we start to integrate the rest of the kids back into return-to-play protocol.”

NAU took control of the game early with its fast pace on both ends of the floor. Idaho was blindsided by the effort the Lumberjacks gave on defense, committing 10 of its 19 turnovers in the first quarter alone.

Idaho had more turnovers than points scored after the first 10 minutes.

The Vandals added four more giveaways in the first five minutes of the second quarter. However, from there on Idaho limited its mistakes on the ball and gave up only five for the rest of the game.

The teams traded blows in the second quarter with each of them scoring 14 points. The Lumberjacks lead at halftime, 34-23.

Fatigue came into question in the third quarter as NAU was missing half of its players. On multiple occasions, Idaho started to chip away at the lead. Halfway through the third quarter, freshman guard/forward Nyah Moran committed an intentional foul just to initiate a scheduled media timeout with the Vandals now down by just five.

With Idaho looking for a resurgence, it turned to its star player, junior guard/post player Beyonce Bea. Bea, the 2021-22 Big Sky Preseason MVP, has struggled to start the season. She currently averages 9.8 points (24th in Big Sky) and 7.4 rebounds (8th in Big Sky) per game this season, a step down from the 16.2 points and 7.7 rebounds she averaged last season that put her at fourth and sixth in the conference in those categories respectively.

The Lumberjacks held her scoreless until the end of the fourth quarter when she made her seventh shot attempt of the night. After her made shot, freshman guard Ashlyn Wallace stole NAU’s inbound pass and went to the free-throw line to add to a potential Idaho comeback.

Bea later was sent to the free-throw line and made two shots to bring Idaho to just one point behind at 46-45. On the next possession, redshirt junior guard Nina Radford hit an arena-stunning three-pointer before the end of the quarter to make the score 49-45.

“[Bea] was a focus,” Payne said. “We honestly really didn’t focus too much on them though. It was all about us and us executing our game plan. She’s a great player but we knew that we needed to play solid defense on all five of them.”

Radford had 21 points on 7/13 shooting. She made three of her five 3-pointers, once again solidifying her role as the team’s sharpshooter.

The Vandals looked to be in prime position to turn its season around against a limited NAU team, but that would all come undone early on in the final quarter.

After receiving a warning for arguing for a foul on a shot from Bea back in the third quarter, Idaho head coach Jon Newlee was dealt a technical foul for arguing as blocking foul against the Vandals with 7:15 left in the game. Two technical fouls would be called in total against Idaho during this sequence, awarding NAU four technical foul shots that it made two of.

NAU went on a 19-12 run after the technical shots as the Lumberjacks found a crucial second wind.

Bea returned to her preseason MVP form in the fourth quarter in an attempt to mount a massive comeback, scoring the team’s first 12 points of the quarter. She went silent after her final basket with 4:34 remaining in the game.

The starters for NAU showed no signs of fatigue whatsoever. Senior guard Lauren Orndoff had a game-high 22 points, including 11 in the fourth quarter to help put the game away. Freshman guard and forward Olivia Moran came out with 16 points on 6/12 shooting. Her previous season-high was just four points against California Baptist on Dec. 11.

“Liv [Olivia Moran] has just been waiting for her opportunity,” Payne said. “Because we have been so deep at the guards there are kids that are sitting on the bench that are very very good players and I was just really happy that she had an opportunity tonight. She stepped up. She capitalized on it. She will absolutely be in the rotation a heck of a lot more.”

Idaho (1-10, 0-2 Big Sky) is currently riding a 10-game losing streak after its only win so far this season in its opener against Lewis and Clark State College (10-1, 4-1 Cascade Collegiate Conference) on Nov. 9. The Vandals are in the same boat as NAU, with its New Year’s Day game against Portland State (5-5, 0-2 Big Sky) off due to COVID-19 protocols within the Portland State program. Idaho is scheduled to play Montana State (7-7, 2-1 Big Sky) on Jan. 6 at 7 p.m. in Bozeman, Montana.