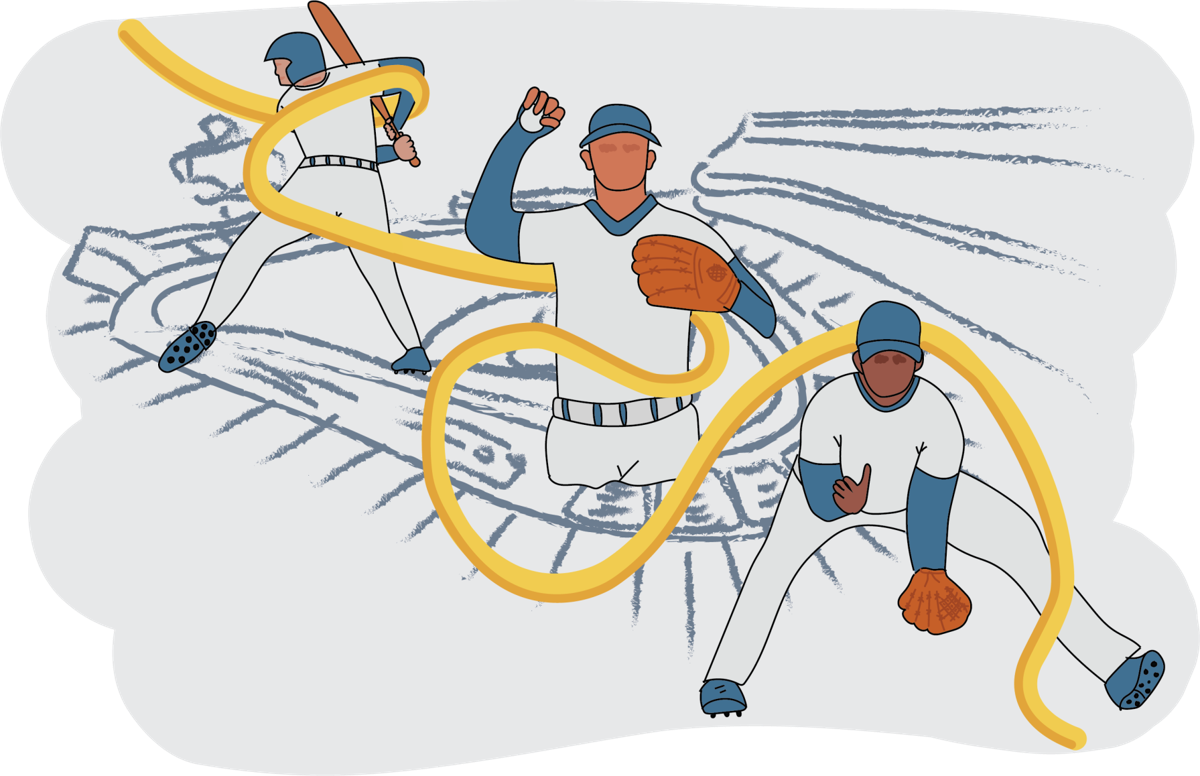 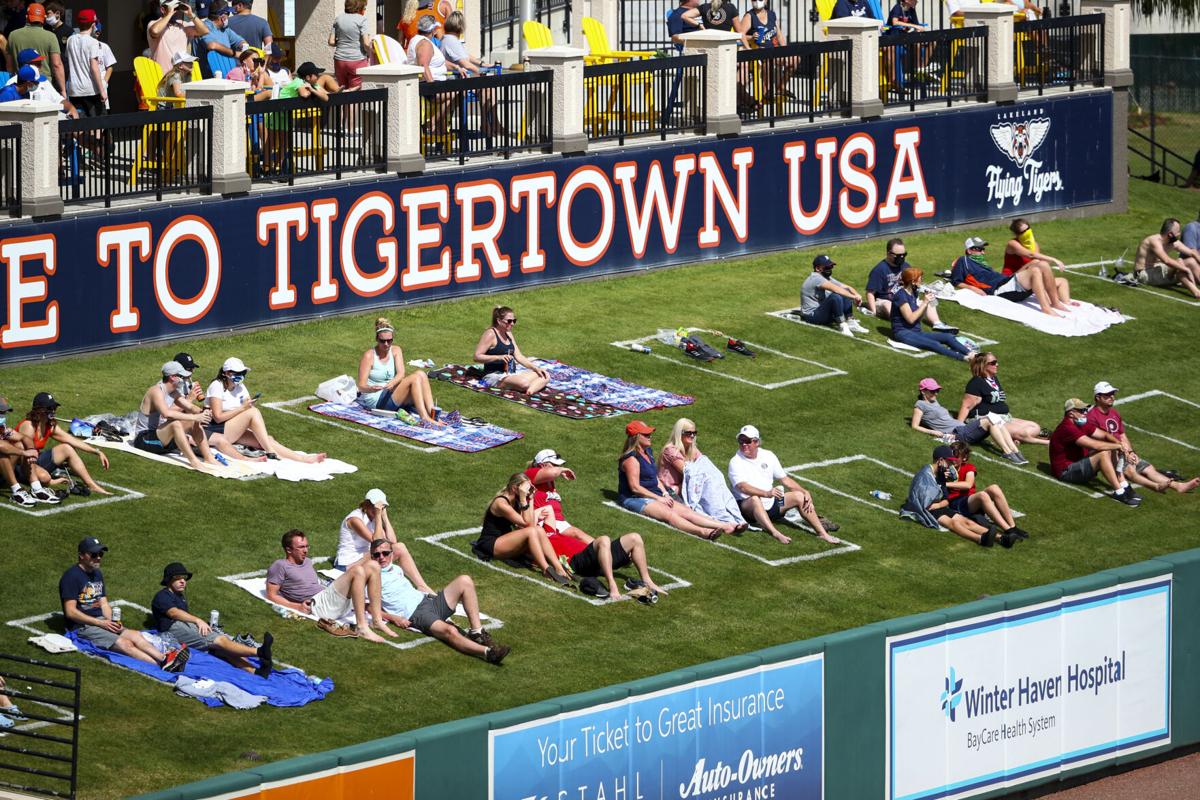 LAKELAND, FL - FEBRUARY 28: Fans sit in socially distant squares painted in center field during a spring training game between the Philadelphia Phillies and the Detroit Tigers on February 28, 2021 at Publix Field at Joker Marchant Stadium in Lakeland, Florida. 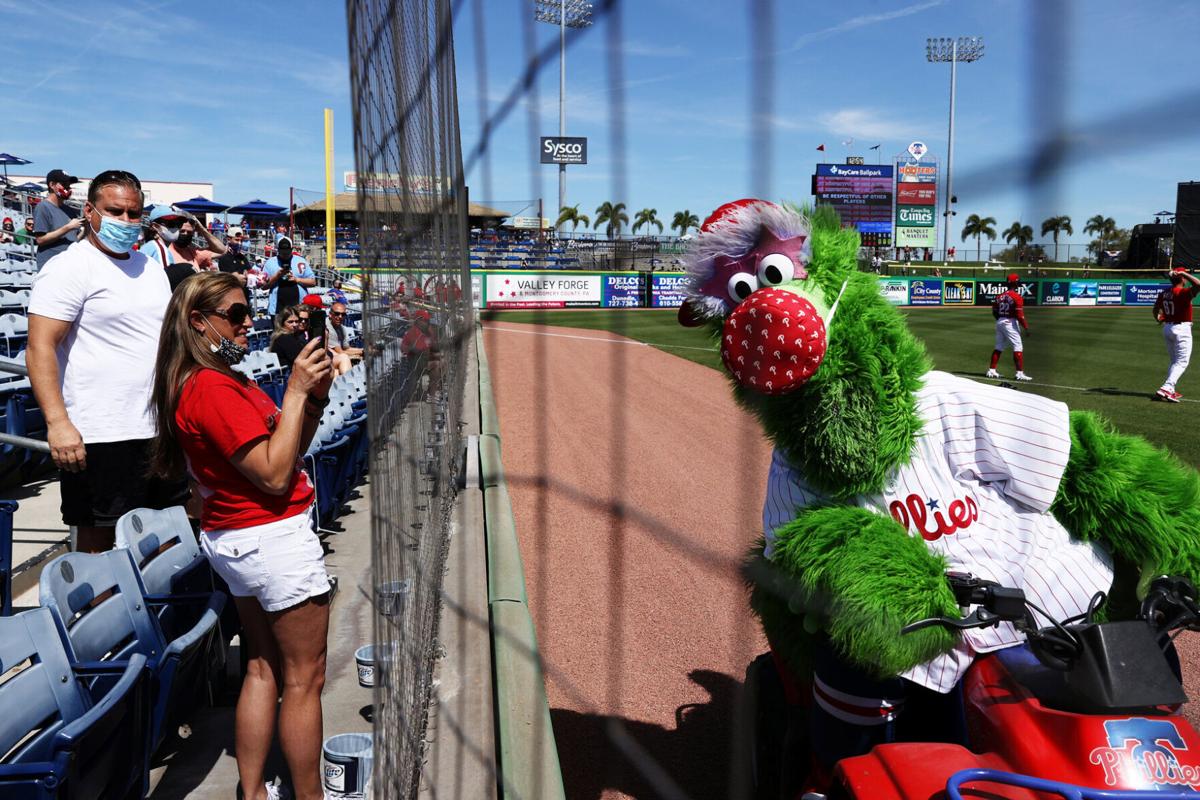 Philidelphia Phillies mascot, the Phillie Phanatic, interacts with fans while sporting a mask at BayCare Ballpark in Clearwater, Florida, March 5, 2021. 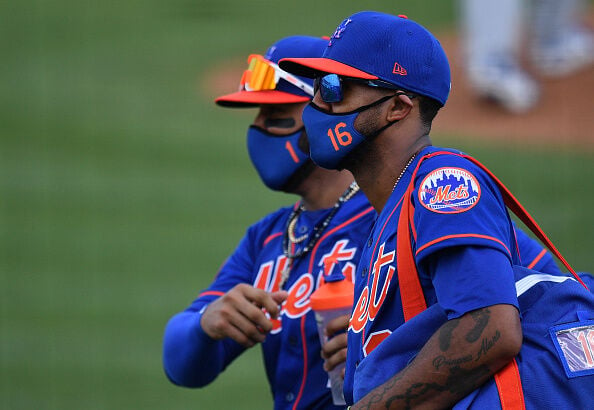 JUPITER, FLORIDA - MARCH 01: Jonathan Villar #1 and Jose Martinez #16 of the New York Mets head back to the clubhouse while wearing masks after the fifth inning against the Miami Marlins in a spring training game at Roger Dean Chevrolet Stadium on March 01, 2021 in Jupiter, Florida.

LAKELAND, FL - FEBRUARY 28: Fans sit in socially distant squares painted in center field during a spring training game between the Philadelphia Phillies and the Detroit Tigers on February 28, 2021 at Publix Field at Joker Marchant Stadium in Lakeland, Florida.

Philidelphia Phillies mascot, the Phillie Phanatic, interacts with fans while sporting a mask at BayCare Ballpark in Clearwater, Florida, March 5, 2021.

JUPITER, FLORIDA - MARCH 01: Jonathan Villar #1 and Jose Martinez #16 of the New York Mets head back to the clubhouse while wearing masks after the fifth inning against the Miami Marlins in a spring training game at Roger Dean Chevrolet Stadium on March 01, 2021 in Jupiter, Florida.

Spring training is off to a swinging start despite COVID-19 still playing a factor in the season. While this year will be different than previous years, that does not change the enjoyment spring training has for the MLB community.

Spring training takes place in both Arizona and Florida for preseason, with both having 15 teams play in each state. Spring training has been in Florida since 1913 and in Arizona since 1929. This tradition started just 44 years after the MLB began.

Fans come from all over the country to watch their favorite teams gearing up for the season. This longstanding tradition has brought the baseball community together, giving unique opportunities for fan engagement.

The MLB describes spring training as an event that brings “Unparalleled player access, intimate ballparks with distinct personalities, and up-close encounters with veteran stars and blossoming prospects,” that makes for a special experience.

This environment is filled with baseball fans of all ages, bringing the joy of the ballpark back to life this season. With fans having the opportunity to see their favorite players close up, it allows for fans to be engaged more in the season itself beyond spring training. Getting to see what teams have in store early in the season makes the competition for teams and fans that much more exciting.

While spring training usually has thousands of fans and concessions filling these stadiums, unfortunately, due to the coronavirus, that is not the case for this season. After spring training and the regular season went on without fans last year, the 2021 season is looking to have limited fan access for these games. The MLB announced its plans to allow teams to decide a reasonable amount of fans at the games.

“The Minnesota Twins and Boston Red Sox, for example, will be limiting their crowds to 2,400 people apiece,” RJ Anderson of CBS Sports wrote. “Other teams figure to impose similar limitations as a means of generating some gate revenue.”

With fans not being in full attendance, this limits the number of concessions venues will be offering as well. Other COVID-19 guidelines include social distancing regulations, masks having to be worn at all times except while eating or drinking and lines will be more spread out than normal. These regulations are being put into place to ensure the safety of not only spectators, but the teams and staff as well. Like other leagues, the MLB is looking to sell tickets in pods, making it accessible for friends and family to sit together while remaining distanced from others. These pods are being sold in packages of two, four and six tickets to ensure spreading out fans within the stadium.

Another change in spring training is the teams are not bringing their entire rosters to these camps. While a majority of the rosters will still be there, teams are excluding some players over others, trying to make sure rookies and veterans get their time to practice and warm up for the season ahead. They will look to section off players and allow 75 at a time, rotating players out in groups once the previous one departs.

For the Arizona Cactus League specifically, they have made similar changes to the league as an extra precaution. In some stadiums, the fan-favorite snack of sunflower seeds will not be allowed to be spit out as a way of reducing any potential spread. Another change in Arizona spring training is that almost no bags will be allowed in the venue. Only diaper bags, small clutches or medical use bags will be permitted.

The Florida Grapefruit League will look a bit different beyond just restrictions this season. While the stadiums in Arizona are much closer in proximity, that is not the case for the Gulf Coast. The MLB decided on two hubs for the Grapefruit League this season to make it safer for team travel, allowing more space and practices for teams.

“Florida’s teams will play a limited schedule of games in 2021 spring training, which keeps travel to a smaller area for most teams,”  Jonathan Tully of the Palm Beach Post wrote.

While these changes are new to Florida Spring Training, it is clear that fans don’t seem to mind, because baseball is still to be played.

Spring training kicked off Feb. 28 and has been playing since. The MLB did see some coronavirus cases at the initial reporting rounds, but has tried to remain as safe as possible since.

With a lot of games left in spring training, there is plenty of time for these teams to continue gearing up for the season, ensuring plenty of practice to start off strong.

MLB is set to start its regular season April 1 which is right around the corner. The kickoff to the season will take place all day while different teams bat their way into the start of the season. Only time will tell if the MLB has learned from last season to mitigate the spread and keep its teams safe.