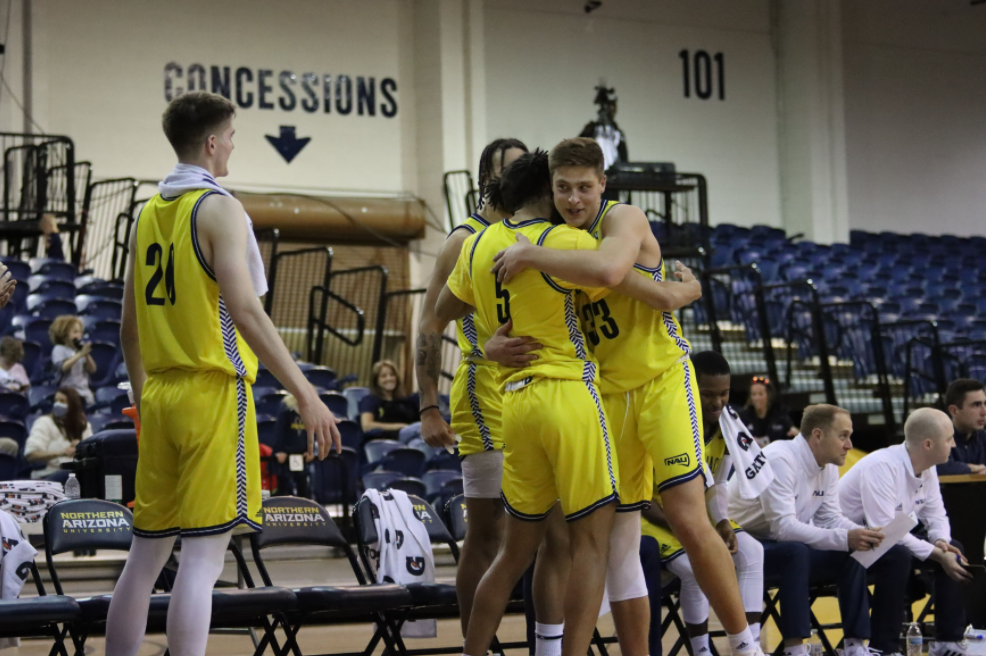 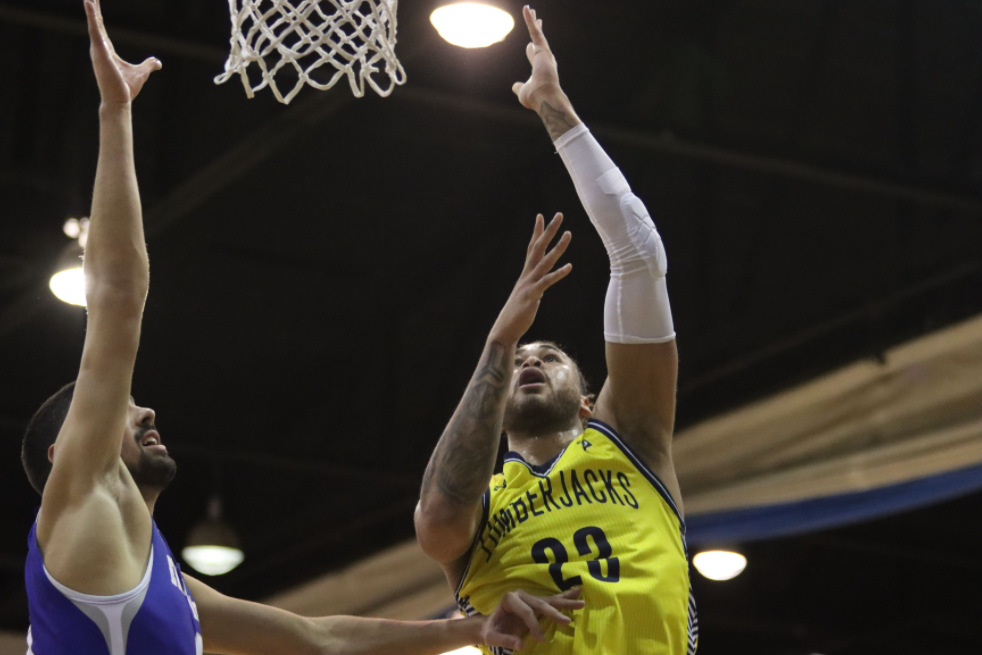 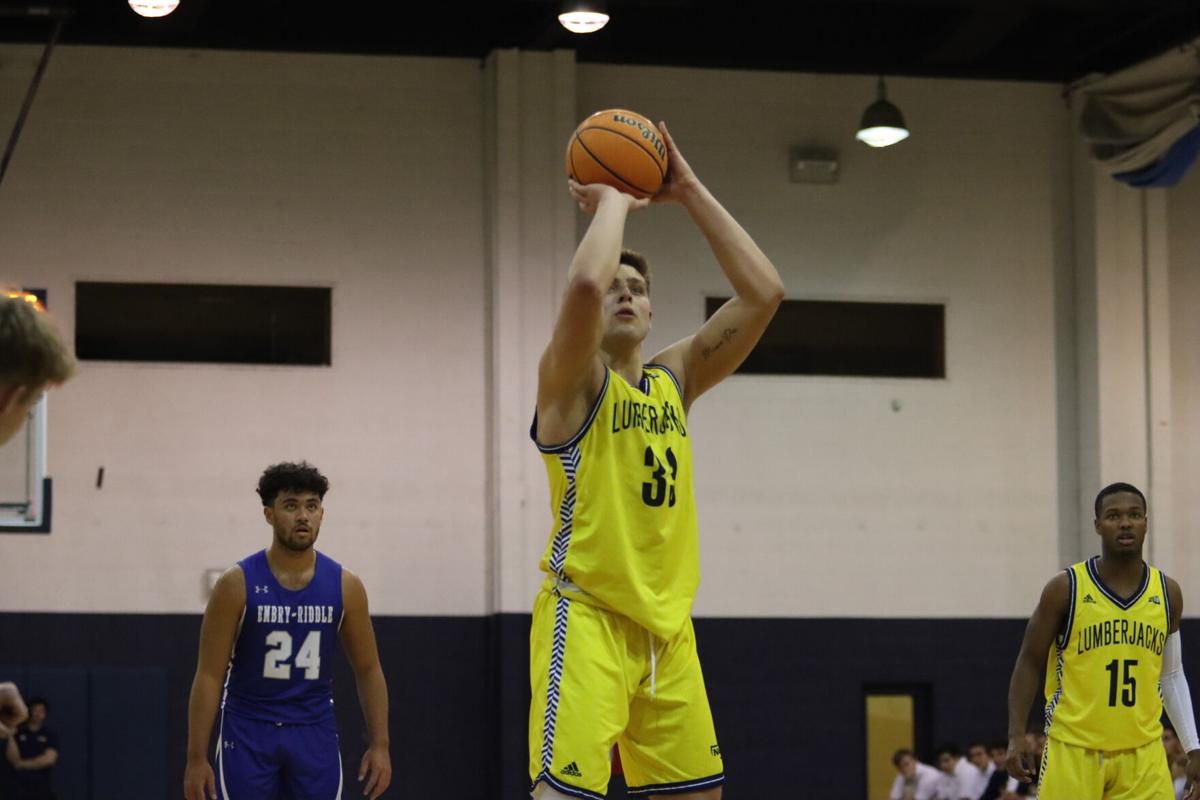 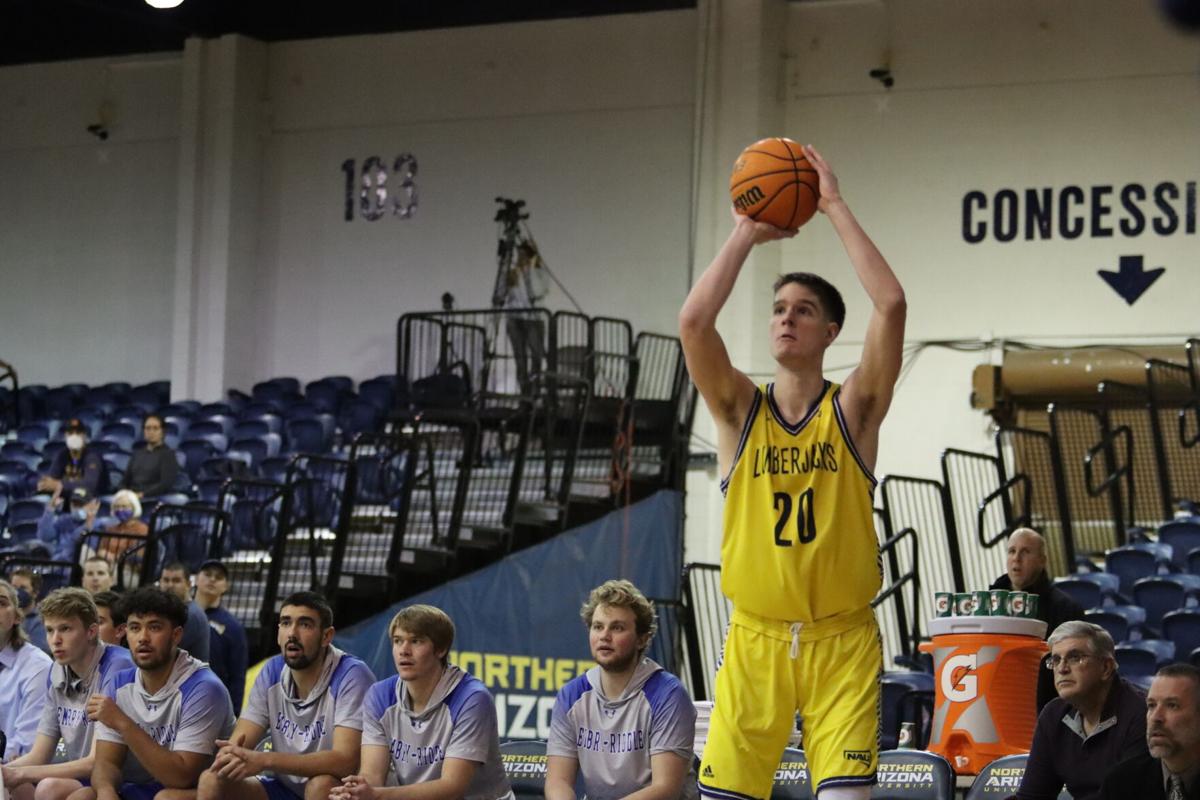 After a 4-game losing streak spanning nearly a whole month, NAU men’s basketball got back on track Wednesday night with a wire-to-wire win over the Embry-Riddle Aeronautical University Eagles, 101-54.

The win marks NAU’s second over an NAIA school this season, as NAU defeated Benedictine Mesa in a similar fashion, 97-48, back on Nov. 15 in the Lumberjack’s home-opener.

“We have a great team here,” NAU head coach Shane Burcar said. “Nobody tried to score 30 points tonight. They took what the defense gave them. They are making the extra pass and everybody was happy for everybody else. I think more than anything our team spirit is very healthy.”

Similar to that win over Benedictine Mesa, redshirt junior forward Nik Mains was a key factor in the Lumberjacks running away with what, in some cases, was a must-win for the Lumberjack team. Every game they will play from here on out will be against a conference opponent.

Mains, along with the whole NAU roster, had an excellent night from three-point range. The junior out of Pinnacle High School in Phoenix let it fly from beyond the arc throughout the night, but especially early on in the game. Mains hit three consecutive 3-pointers within the first two minutes of the game, prompting a quick timeout by Embry-Riddle head coach and former NAU women’s basketball assistant coach Eric Fundalewicz.

The shooting spree continued for Mains as he hit his first six 3-point shots to skyrocket his points to 18 by halftime, just two away from his previous career-high. He finished the game with a new career-high of 24 points on 8/11 shooting from the floor with all but one of his shots coming from three-point range.

His eight 3-pointers are the most by a Lumberjack this season and tied for sixth in NAU history for threes in a single game.

Mains wasn’t the only one feeling it from range. Sophomore guard Jalen Cone also attempted all but one of his shots from deep, connecting on seven of his 12 attempts to give him 21 points.

Cone added to star-studded points total so far this season. He is averaging 18 points per game, the second-most in the Big Sky.

The Eagles managed to stick around in the early parts of the first half as freshman guard Luke Dunn hit a pair of threes to keep the game within arms reach as NAU only led by 10 midway through the first half.

Embry-Riddle had no answer for NAU on both the perimeter and in the post. Redshirt sophomore center Ezekiel Richards was left largely uncontested against a smaller Eagle squad, putting up career-highs in both points (16) on 8/13 shooting and rebounds (8) with three of them being offensive boards.

The Lumberjacks dominated the paint by nearly doubling up the Eagles, 40-22 from that area.

“We were just taking the shots that they gave us,” Burcar said. “They play zone so we knew we would get a lot of three-point shot opportunities tonight and we knocked them down.”

NAU took full control of the game in the latter stages of the first half by pulling off a 16-2 run at a time where Embry-Riddle had missed 14 of its last 15 shots.

By halftime, NAU was up 46-18. Mains single-handedly matched Embry-Riddle’s point total after 20 minutes of play. With how hot Mains was feeling from deep all night, he couldn’t help taking a few more shots to see just how hot he was.

“I think it was my fifth or sixth that I’m pretty sure was a heat check for me,” Mains said. “My teammates were still just looking for me.”

With how much NAU pushed the pace on Embry-Riddle, the Lumberjacks were in good position to make open shots thanks to fluid ball movement and solid passing. Redshirt freshman forward Carson Towt played a huge part in every facet of NAU’s strength on both ends of the court.

Towt made his contributions largely through passing and rebounding as he reached double-digits in both categories about midway through the second half. All eyes were on him to see if he could earn a triple-double, something that hadn’t been done by a Lumberjack in nearly nine years.

The Eagles made him and his team work for points in the homestretch by sending the Lumberjacks to the free-throw line. Towt was already struggling from the line throughout the game and those struggles continued as his team tried its best to give him the ball to reach a triple-double.

With 4:08 left in the game, Towt needed one more point to reach 10 points and the triple-double. However, he missed both of them, leaving the NAU bench and the crowd on edge.  On NAU’s next possession the Lumberjacks made sure to give him the ball, well aware of the milestone he was on the brink of reaching.

Going to the foul line again, Towt missed his first shot to put the whole arena on edge. With dead silence on his second shot, Towt got the roll on his second shot to give him 10 points and the triple-double, leading to cheers in the Rolle Activity Center, none any louder than from his teammates on the bench.

Towt’s triple-double is only the second in NAU men’s basketball history, with the only other one coming from Stallon Saldivar who did so on Feb. 9, 2013, against Eastern Washington in an overtime loss.

The triple-double is the only one in NAU history to happen in regulation as he had 10 points, 14 rebounds and 11 assists. However, it came on 4/15 shooting from the free-throw line.

“I gotta make free throws,” Towt said. “I’ll be in here [Rolle] tonight, whenever. I missed a lot of layups too. It wasn’t a great night for me but hats off to the team, hats off to win.”

NAU as a whole shot 10/28 from the free-throw line. However, Burcar didn’t seem as concerned about the season-low stat for his team.

“A lot of that was Carson [Towt]," Burcar said. "Carson, obviously, has to get better at his free throws. Wynton Brown was 3/7. If you take away those two guys, the guys made their free throws. I’m not going to lose sleep over it. We’ll keep working on it.

The rest of the team without Towt and freshman forward Wynton Brown shot 3/6 from the free-throw line. NAU got its final points from Brown who got the team to over 100 points with an and-one.

The Lumberjacks reached the century mark for the first time this season and the first time since Nov. 15, 2019, when it defeated SAGU American Indian College, 105-32.

NAU (5-9, 1-2 Big Sky) snaps a four-game losing streak and will look forward to its next opponent, Southern Utah (9-5, 3-1 Big Sky) on Saturday at 5 p.m. MST at the America First Event Center in Cedar City, Utah. The Thunderbirds were projected to win the conference in the Big Sky Preseason Coaches’ Poll after winning the regular season championship last season.

The Lumberjacks were without junior forward Spencer Roberts due to a wrist injury and will be without him on Saturday. Freshman guard Jayden Jackson and redshirt sophomore forward Keith Haymon were out tonight due to undisclosed illnesses, leaving their status for the road game on Saturday to be unknown.

Embry-Riddle (2-12, 0-0 CAL PAC) are on an 11-game losing streak starting the season 2-1. The Eagles will begin conference play on Saturday at 8:30 MST as it takes Park University - Gilbert. Embry-Riddle has yet to play a home game this season, as the loss to NAU marks the team’s 14th game of its 18-game road trip.